microRNAs (miRNAs) belong to a class of short (19-22 nucleotides), noncoding RNA sequences [8]. It has been confirmed that aberrantly expressed miRNAs play essential roles in tumorigenesis and progression processes [9]. Recently, it has been reported that miR-940, miR-363, miR-25, and miR-269-5p function as oncogenes in gastric cancer [10-12], whereas miR-22, and miR-361-5p function as tumor suppress genes [13-15].

F-box and WD repeat domain-containing 7 (FBW7) is a substrate recognition component of the Skp1-Cul1-F-box (SCF) ubiquitin ligase complex and functions as a tumor suppressor by ubiquitination and degradation several oncoprotein proteins, including c-Myc, cyclin E, Notch-1, c-Jun, and Mcl-1, thus participating in inhibiting the progression of cancer [16-18]. Low expression of FBW7 is significantly correlated with poor prognosis in various human malignancies, such as gastric cancer, breast cancer, colon cancer, and esophageal squamous cell carcinoma [19-22]. However, the upstream signaling pathways that govern FBW7 stability and/or function are very limited [23]. 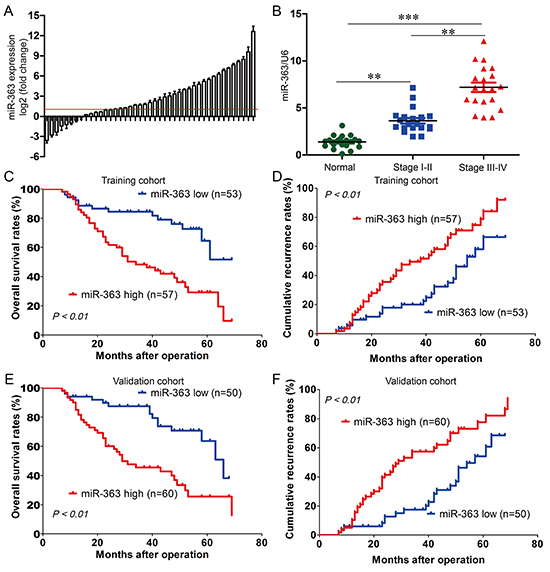 Figure 1: miR-363 is frequently increased in gastric cancer and significantly correlated with poor prognosis. A. Expression of miR-363 in 110 pairs of gastric cancer tissues and their corresponding adjacent normal tissues in a training cohort. Expression level of miR-363 was determined by real-time PCR and normalized to U6. Red line indicates fold change of miR-363 equal to 2. B. 110 patients were divided into stage I-II and stage III-IV groups. The diagram shows the miR-363 expression of each group. **P<0.01, ***P<0.001. C, D, E, and F. Patients in the training and validation cohorts were divided into a miR-363low expression group and a miR-363high expression group, respectively, according to the result of real-time PCR. Survival curve was calculated with the log-rank test. Results show OS and recurrence of patients with high or low miR-363 expression in the training and validation cohorts. 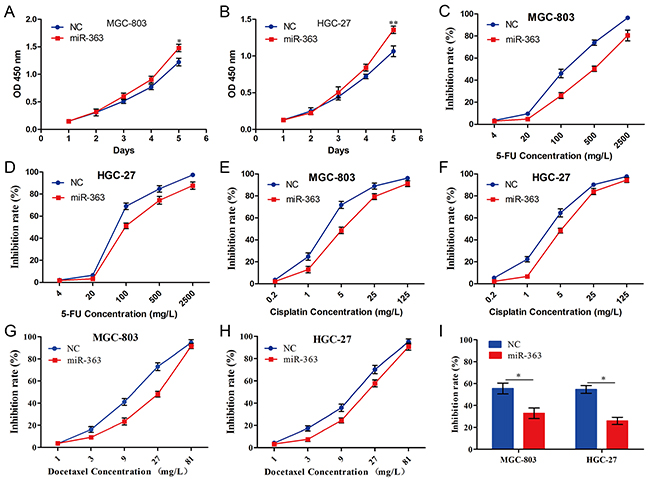 To identify the potential target mRNA of miRNA-363, the databases TargetScan, PicTar, miRDB, and microcosm were used. We found that the 3′-UTR of FBW7 mRNA contains a sequence motif, which perfectly matching with the “seed-sequence” of the miR-363 (Figure 3A).

FBW7 is the substrate recognition component of the SCF ubiquitin ligase complex and functions as a tumor suppressor by targeting various oncoproteins for ubiquitination and degradation [16]. Therefore, we hypothesized that miRNA-363 might be capable of inhibiting the expression of FBW7, thereby promoting the proliferation and resistance to chemotherapy agents. To confirm whether FBW7 is a direct target of miR-363 in gastric cancer cells, we conducted luciferase reporter assays after transfection of wild type or mutated FBW7 3′-UTR into gastric cancer MGC-803 cells, with synthetic miR-363 mimic. We found that miR-363 reduced luciferase activity in cells transfected with wt FBW7 3′-UTR, but had no effect on luciferase activity in cells transfected with mutant FBW7 3′-UTR (Figure 3B). Additionally, forced expression of miR-363 reduced FBW7 mRNA levels in gastric cancer MGC-803 and HGC-27 cells (Figure 3C). Furthermore, the expression of miR-363 in human gastric cancer tissues was negatively related to FBW7 mRNA level (Figure 3D and 3E). Collectively, these results indicate that FBW7 is a direct target of miR-363 in gastric cancer. 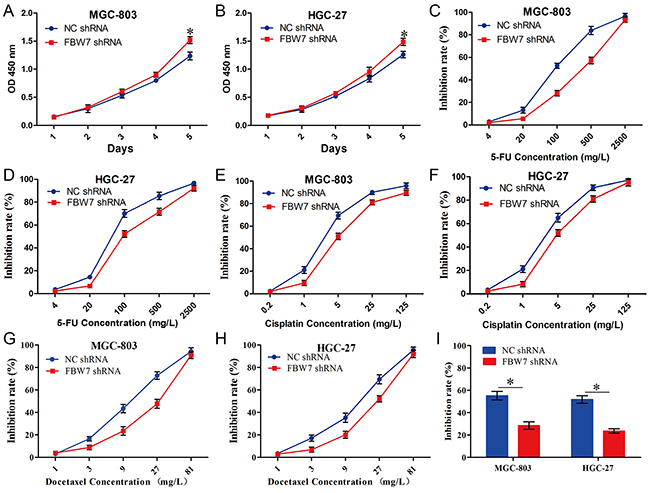 It has been confirmed that critical oncogenic FBW7 substrates including c-Myc, Mcl-1, cyclin E, and c-Jun. In order to better understand the mechanisms of miR-363 involved in proliferation and resistance to chemotherapy agents in gastric cancer cells, western blotting was used to detect the FBW7-shRNA- and miR-363-induced signaling pathway changes in MGC-803 and HGC-27 cells. Interestingly, as well as miR-363, FBW7-shRNA significantly inhibits c-Myc, Notch, cyclin E, and c-Jun expression at the protein level in MGC-803 and HGC-27 cells (Figure 5A and 5B). Next, we investigated the proliferation of the MGC-803-miR-363 and HGC-27-miR-363 cells with forced FBW7 expression and found that increased FBW7 expression was sufficient to block the miR-363-induced proliferation in gastric cancer cells (Figure 5C-5E). 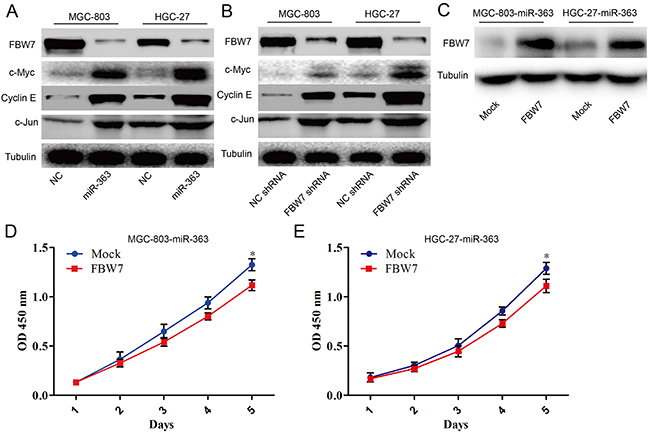 We then analyzed retrospective data from 40 advanced recurrent gastric cancer patients receiving DCF therapy who had undergone gastric cancer resection 2 to 60 months prior to the combined therapy; patient demographics (Supplementary Table S4) and progression free survival (PFS) rates were recorded. miR-363 expression levels were then measured (Figure 6A), and Kaplan-Meier survival analysis indicated that the OS probability for the miR-363-high group was much lower than that for the miR-363-low group (Figure 6B). The median OS was 21.0 months in the miR-363-high group and 52.6 months in the miR-363-low group; therefore, we conclude that high levels of miR-363 expression lead to gastric cancer DCF resistance.

Figure 6: miR-363 induces DCF resistance in gastric cancer patients. A. 40 patients were divided into DCF-sensitive and DCF-resistant groups. The diagram shows the miR-363 expression of each group. **P<0.01. B. Comparison of PFS survival curves for patients with high and low miR-363 expression that were treated with DCF.

Currently, DCF regimen remains a first line treatment course for patients with advanced gastric cancer. Chemo-resistance causing treatment failure and recurrence is still an intractable problem. As the poor prognosis in gastric cancer patients is mainly due to late diagnosis and bad chemotherapy response, thus, it is urgently needed to identify predictive markers of therapeutic response.

Recently, miRNAs have emerged as important biomolecules in regulating the responses of cancer cells to therapy agents. Patient response to chemotherapy has been proved closely correlated with the dysregualton of microRNAs expression [24-26]. Currently evidences suggests the roles of miRNAs, including influence of therapeutic induced cell apoptosis, regulation of multiple drug resistance (MDR)-related proteins expression, and induction of cancer cells converting to tumor stem-like cells (TSC) in several cancers [27]. Recently, studies have demonstrated that there is an intimate correlation between dysregulation of FBW7 expression and the incurring chemotherapy resistance. FBW7 exerts its tumor suppressor function by promoting the ubiquitination and degradation of various oncoproteins, including c-Myc, Mcl-1, cyclin E, and c-Jun, which regulate many cellular processes, for example, cell proliferation, cellular metabolism, differentiation, and apoptosis. Since dysregulation of the FBW7 expression is linked to chemotherapy resistance, FBW7 may represent a novel therapeutic target for increasing chemotherapy sensitivity of cancer cells to chemotherapeutics [28]. In this study, we showed that miR-363 promotes gastric cancer cells proliferation by inhibiting FBW7 expression and was associated with chemo-resistance of gastric cancer cells. Silencing FBW7 largely phenocopied miR-363-induced resistance to chemotherapy agents and promoted proliferation in gastric cancer cells. In addition, an inverse correlation between miR-363 and FBW7 mRNA expression was observed in gastric cancer tissues.

In summary, our findings indicate that increased miR-363 expression is a frequent event in gastric cancers and increased miR-363 expression promotes cell proliferation, chemo-resistance by inhibiting the FBW7 pathway, suggesting that targeting miR-363 in a subset of gastric cancer would be an optimal therapeutic strategy and miR-363 may be a biomarker for predicting responsiveness to chemotherapy treatment.

Total RNA extraction, real-time PCR, and western blotting were performed as previously described [29, 30]. The sequence of primers for PCR used is listed in Supplementary Table S2.

microRNAs up-regulation was achieved by using a lentivector-mediated pseudoviral system (LV500A-1; System Biosciences, San Francisco, CA) performed as previously described [31]. The FBW7 and FBW7-shRNA expression lentivirus were purchased from Shanghai GeneChem Co., and the lentiviral vector was transfected into cells as described elsewhere [32].

8. Song S and Ajani JA. The role of microRNAs in cancers of the upper gastrointestinal tract. Nature reviews Gastroenterology & hepatology. 2013; 10:109-118.

16. Welcker M and Clurman BE. FBW7 ubiquitin ligase: a tumour suppressor at the crossroads of cell division, growth and differentiation. Nature reviews Cancer. 2008; 8:83-93.