Overexpression of lysyl oxidase (LOX) is often observed in estrogen receptor negative (ER–) breast cancer patients with bone metastasis. In the present bioinformatics study, we observed that LOX is a prognostic factor for poor progression free survival in patients with ER– breast cancer. LOX overexpression was positively correlated with resistance to radiation, doxorubin and mitoxantrone, but negatively correlated with resistance to bisphosphonate, PARP1 inhibitors, cisplatin, trabectedin and gemcitabine. LOX overexpression was also associated with EMT and stemness of cancer cells, which leads to chemotherapeutic resistance and poor outcome in ER– patients. Although we suggest several therapeutic interventions that may help in the management of LOX+ ER– breast cancer patients, experiments to validate the function of LOX in ER– breast cancer are still needed.

Breast cancers in which the tumor is estrogen receptor (ER)-negative (ER–) account for approximately 30% of white patients [1] and about 40%–50% of Chinese patients [2]. These patients tend to have a poorer prognosis with a higher risk of disease recurrence and metastasis than patients with ER+ tumors. This is in part because there are fewer effective methods for preventing and treating ER– breast cancers. In addition, the molecular subtypes of ER– tumors are not well defined due to their biological heterogeneity. In recent years, however, a number of potential signaling pathways driving ER– breast cancer have been identified [3, 4]. This makes targeted therapy focusing on a specific molecular subtype a potentially effective strategy for managing ER– breast cancer patients. That said, the clinical application of such new approaches remains a prospect for the future.

To promote translational research on LOX towards greater clinical significance, in this study, we address the following questions: how is LOX associated with metastasis and estrogen receptor 1 (ESR1) expression; why does bisphosphonate inhibit metastasis in patients overexpressing LOX; and are there any promising therapeutic options for managing LOX+ ER– breast cancer patients.

LOX overexpression is associated with poor PFS and metastasis 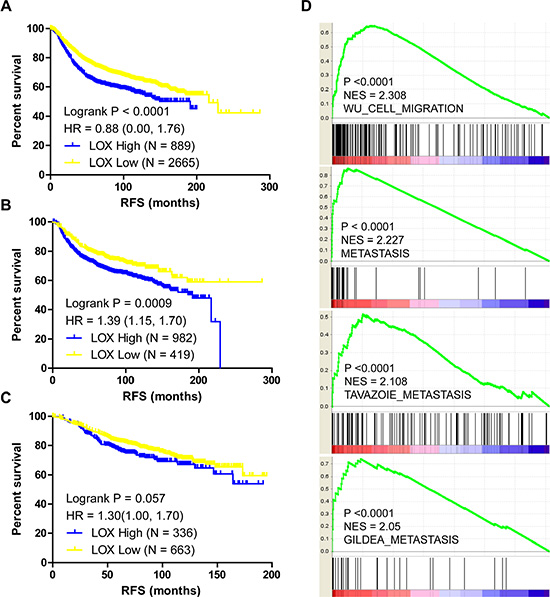 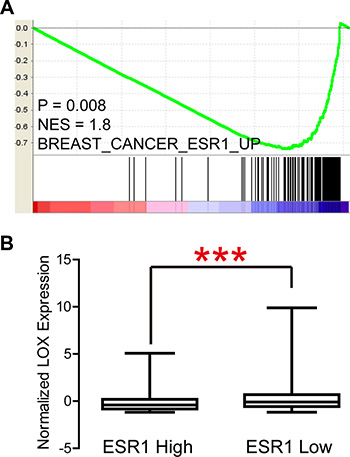 Figure 2: LOX expression correlates negatively with ESR1 signatures (A) and ESR1 expression (B).

Bisphosphonate is a therapeutic option for LOX+ breast cancer patients 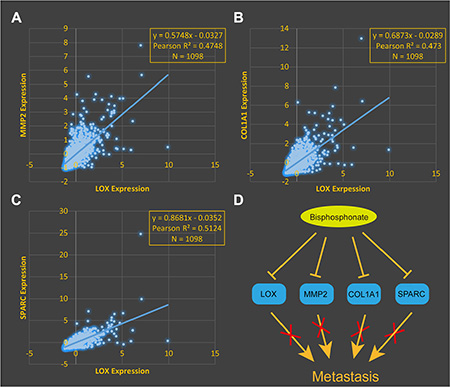 We next sought to explore the mechanisms and characteristics underlying the LOX-associated poor PFS. GSEA results showed that LOX expression positively correlates with gene signatures that represent poor outcome after radiation therapy. This finding indicates that LOX+ breast cancer patients are resistant to radiation therapy (Figure 4A and 4B). Similarly, it may not be a good choice for LOX+ patients to choose doxorubicin (Figure 4C) or mitoxantrone (Figure 4D) for chemotherapy. Other analyses indicated that LOX overexpression correlates with epithelial-mesenchymal transition (EMT) (Figure 4E and 4F) and activation of cancer stem cell pathways, such as the WNT and HEDGEHOG pathways (Figure 4G–4I). Thus, resistance to radiation and certain drugs, EMT transition, and harboring cancer stem cell like characteristics may contribute to the LOX-related poor prognosis. 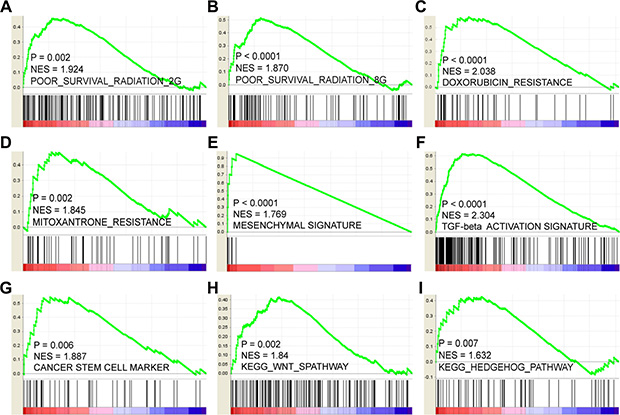 Overexpression of LOX does present certain advantages. For instance, LOX expression correlates negatively with expression of genes associated with DNA repair (Figure 5A, P = 0.006), but correlates positively with genes down-regulated in samples resistant to cisplatin, trabectedin and gemcitabine (Figure 5B–5D, P < 0.0001, P < 0.0001, P = 0.002, respectively). This indicates that cytotoxic drugs such as cisplatin and gemcitabine will likely achieve a better clinical response in patients overexpressing LOX. In addition, LOX expression is significantly higher among carriers of BRCA1 mutations than among those without BRCA1 mutation (Figure 6A), though LOX expression does not differ between BRCA2 mutation and wild type carriers (Figure 6B). Since poly (ADP-ribose) polymerase (PARP) inhibitors are effective for treatment of breast cancer patients with BRCA1 mutation [11], this class of drugs may also be effective for managing breast cancer patients who overexpress LOX and carry BRCA1 mutation. 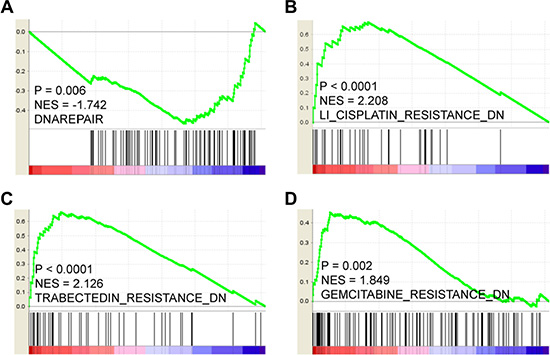 Based on the analysis summarized above, the appropriate treatment options are illustrated in Figure 7. Briefly, radiation, doxorubicin and mitoxantrone would be ineffective in LOX+ ER– patients. On the other hand, a PARP1 inhibitor, cisplatin, trabectedin and gemcitabine may produce promising results. 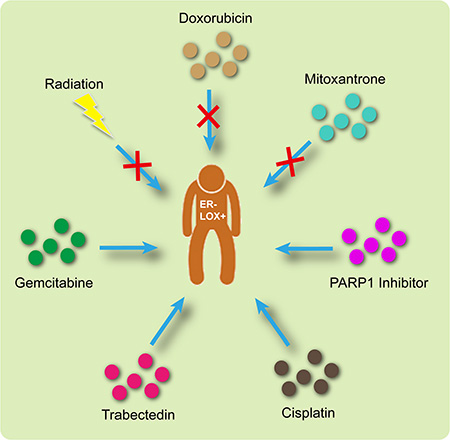 The ER– breast cancer subtype is associated with a significantly higher 5-year recurrence rate and fewer effective treatment strategies than is the ER+ subtype [12]. The outcomes of treatments aimed at suppressing key signaling pathways are far from satisfying due to the heterogeneity of ER– tumors [13]. At present, much effort is focused on the molecular subtyping of ER– breast cancers [3, 4]. For example, molecular markers such as mTOR and Src are reportedly involved in the development of ER– tumor metastasis [14].

Bisphosphonates are common medications used to treat osteoporosis and may suppress bone metastasis by inhibiting LOX [7, 15]. Moreover, our analysis indicates that LOX is likely co-expressed with MMP2, COL1A1 and SPARC, all of which contribute to initiating cancer metastasis and EMT [9, 10, 16–18], and that bisphosphonates inhibit MMP2 activity [19, 20], COL1A1-driven osteoporotic fracture [21] and SPARC-stimulated EMT [22, 23]. Bisphosphonates may also inhibit breast cancer progression by decreasing stromal TGF-β excretion and inhibiting TGF-β signaling in cancer cells [24]. Based on these findings, we suggest that bisphosphonates are potentially effective chemotherapeutics for treating LOX+ ER– breast cancer patients.

Gemcitabine and cisplatin are currently used in adjuvant settings for treatment of breast cancer. Hu et al. [25] showed cisplatin plus gemcitabine could be an alternative or even the preferred first-line therapeutic strategy for patients with metastatic triple-negative breast cancer. Since LOX expression positively correlates with cisplatin and gemcitabine sensitivity, LOX+ ER– breast cancer patients may show a higher response rate to these drugs.

Inhibition of PARP is an effective strategy for suppressing cancers with BRCA1 and BRCA2 mutations. There are currently several PARP inhibitors in clinical trials aimed at evaluating their efficacy for the management of BRCA-mutated breast cancers [11]. For instance, among patients with metastatic triple-negative breast cancer, the response rate was significantly higher among patients receiving chemotherapy plus iniparib (a PARP inhibitor) than among those receiving chemotherapy alone (56% vs. 34%, p = 0.01) [26]. It was also reported that preoperative combined gemcitabine, carboplatin and iniparib is effective for management of early-stage triple-negative and BRCA1/2 mutation-associated breast cancer [27]. The correlation between LOX and BRCA mutation has never been reported before, but our analysis indicates that LOX expression correlates significantly with BRCA1 mutation. Since BRCA1 mutation carriers are sensitive to PARP inhibitors, some LOX+ ER– breast cancer patients may also benefit from PARP inhibitors.

In sum, our findings show that radiation, doxorubin and mitoxantrone will be less effective in patients overexpressing LOX, but that PARP inhibitors, cisplatin, trabectedin and gemcitabine may yield positive effects. A limitation of this study is that all the data presented are based on bioinformatics analyses. Still needed are wet lab experiments and well-designed clinical trials before any clinical significance can be attributed.

For this study, only publicly available datasets were downloaded and reanalyzed. The Research Ethics Committee of Zhejiang Provincial People’s Hospital therefore waived the requirement for ethical approval.