2 Department of Emergency, The Affiliated Huai’an Hospital of Xuzhou Medical College and The Second People’s Hospital of Huai’an, Huai’an, China

MicroRNAs have been implicated in some biological and pathological processes, including the myocardial ischemia/reperfusion (I/R) injury. Recent findings demonstrated that miR-93 might provide a potential cardioprotective effect on ischemic heart disease. This study was to investigate the role of miR-93 in I/R-induced cardiomyocyte injury and the potential mechanism. In this study, we found that hypoxia/reoxygenation (H/R) dramatically increased LDH release, MDA contents, ROS generation, and endoplasmic reticulum stress (ERS)-mediated cardiomyocyte apoptosis, which were attenuated by co-transfection with miR-93 mimic. Phosphatase and tensin homolog (PTEN) was identified as the target gene of miR-93. Furthermore, miR-93 mimic significantly increased p-Akt levels under H/R, which was partially released by LY294002. In addtion, Ad-miR-93 also attenuated myocardial I/R injury in vivo, manifested by reduced LDH and CK levels, infarct area and cell apoptosis. Taken together, our findings indicates that miR-93 could protect against I/R-induced cardiomyocyte apoptosis by inhibiting PI3K/AKT/PTEN signaling.

microRNAs (miRNAs) are a group of endogenous, non-coding, single-strand, small RNAs of 22-25 nucleotides, which downregulate the expression of multiple target genes via degradation or translational inhibition of their target mRNAs. Accumulating evidence [2, 3] has demonstrated that miRNAs have crucial roles in various cellular and biological processes, including cell growth, proliferation, differentiation, migration and apoptosis. Recently, it has been reported that miRNAs play an important role in myocardial I/R injury and have become important targets for therapeutic intervention. For example, knockdown of endogenous miR-320 provided protection against I/R-induced cardiomyocyte apoptosis by targeting heat shock protein 20 [4]. miR-7a/b was sensitive to I/R injury and protected myocardial cells against I/R-induced apoptosis by inhibiting poly (ADP-ribose) polymerase expression [5].

Increasing evidences also supports a pivotal role for miR-93 in multiple processes [6, 7], including tumorigenesis, metastasis, cell proliferation and apoptosis. However, the role of miR-93 in the cardiac I/R injury has rarely been reported. In the present study, we demonstrated that transfection with miR-93 mimic could attenuate myocardial injury and apoptosis induced by hypoxia/reoxygenation (H/R) in H9c2 cells. A bioinformatics analysis identified phosphatase and tensin homolog (PTEN) as an important candidate target for miR-93. Accordingly, we examined the possible involvement of PTEN in the protective action of miR-93.

To identify the potential effect of miR-93 in myocardial I/R injury, we measured the expression of miR-93 in H9c2 cells after 10 h hypoxia and 2.5 h reoxygenation. As compared with controls, the expression of miR-93 was significantly down-regulated by 48% in H9c2 after H/R treatment (P < 0.05, Figure 1). This finding raised the possibility that miR-93 may play an important role in H/R injury of H9c2 cells. 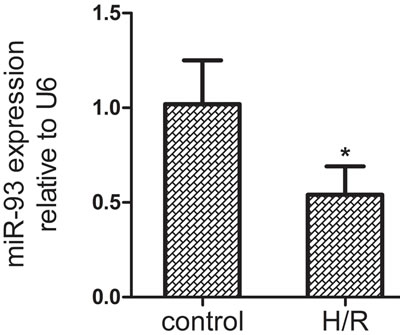 MDA reflects cardiomyocyte oxidative damage. As shown in Figure 2b, the H/R-induced MDA release was significantly decreased by the miR-93 mimic. However, the miR-93 inhibitor increased MDA release in response to H/R, which was also attenuated by co-transfection with siRNA-PTEN. 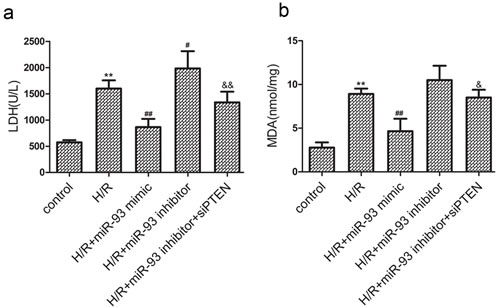 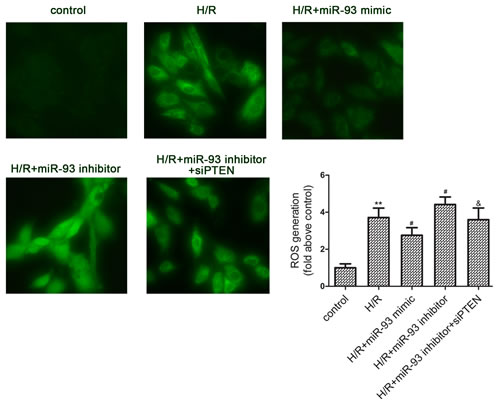 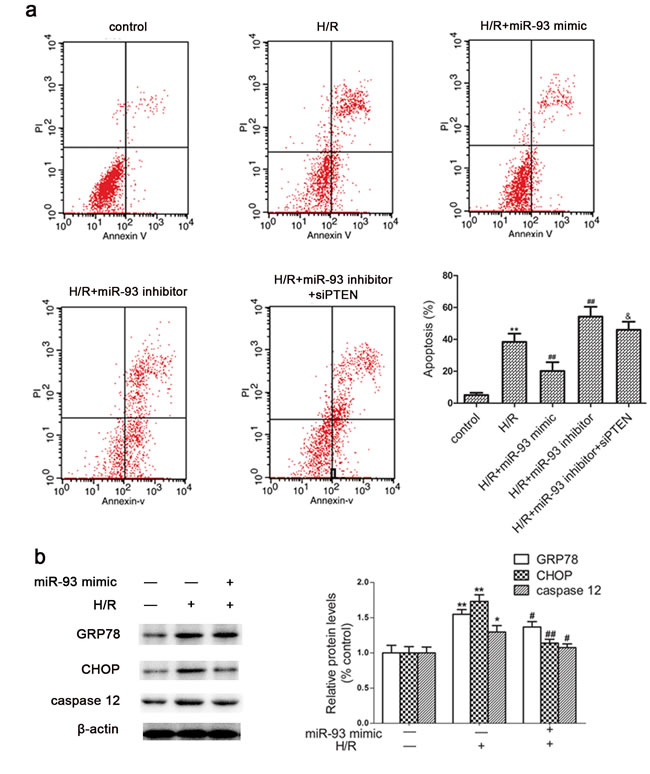 PTEN is a potential target of miR-93

Bioinformatic analysis using ‘miRanda’ miRNA target prediction program revealed PTEN as one of the possible target gene of miR-93. Specifically, the 3’-UTR of the PTEN mRNA contains one binding site for miR-93 (Figure 5a). In comparison with the mutated control, the miR-93 mimic reduced the activity of the luciferase reporter fused with the PTEN 3’-UTR by 39% (Figure 5b). Western blot analysis revealed that the protein level of PTEN was increased by the miR-93 inhibitor, whereas the miR-93 mimic reduced the PTEN expression in response to H/R (Figure 5c). Furthermore, a significant inhibition of p-Akt levels in H9c2 after H/R treatment, and this inhibition was also ameliorated by miR-93 mimic (Figure 5d). However, 20μM of LY294002, a PI3K-Akt pathway inhibitor, could partially released p-Akt from miR-93 mimic-mediated elevation. 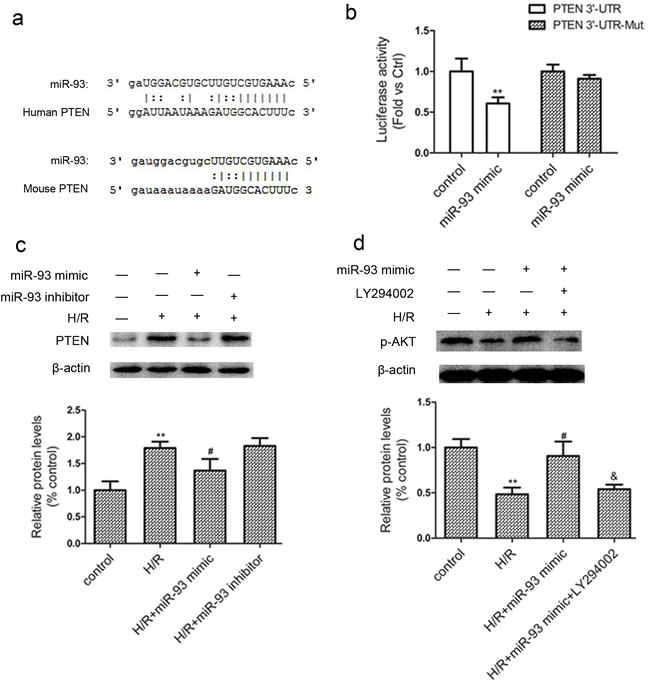 As shown in Figure 6a, after myocardial ischemia for 30 min followed by 2 h of reperfusion, miR-93 expression was remarkably downregulated in rat hearts. Transfection of miR-93 into the myocardium could significantly increase miR-93 expression by 301.85 %. Furthermore, the activities of serum CK and LDH were significantly increased compared with sham group. However, the elevation in CK and LDH levels was obviously suppressed by Ad-miR-93 transfection (Figure 6b). Consistent with cardiac enzymes result, Ad-miR-93 transfection significantly reduced myocardial infarct size compared with that in the I/R group (Figure 6c). Additionally, myocardial cell apoptosis was also assessed. As shown in Figure 6d, the Bcl-2/Bax protein expression ratio was decreased in the I/R group, which were reverted in the I/R+Ad-miR-93 group. Moreover, the caspase-3 levels were upregulated in the I/R group, which were reverted in the I/R+ Ad-miR-93 group. Our findings strongly support that miR-93 also protects against myocardial I/R injury in vivo. 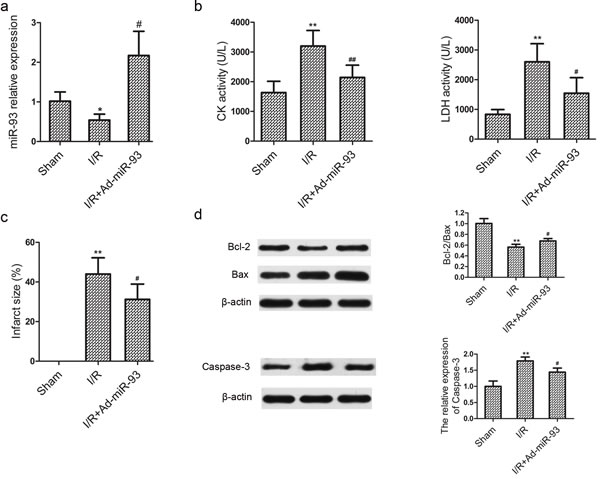 Furthermore, we investigated the potential role of miR-93 in I/R-induced myocardial cell injury. We found that overexpression of miR-93 significantly decreased H/R-induced LDH release, MDA contents, ROS generation, and cell apoptosis in vitro. Signal transduction pathways involving GRP78, CHOP, and caspase-12 are known to mediate ERS-associated apoptosis [11-12]. Moreover, in this study we found the protein levels of GRP78, CHOP, and caspase-12 were increased by I/R injury, whereas miR-93 pretreatment reversed these effects. Therefore, overexpression of miR-93 may be responsible for decreasing ERS-associated apoptosis and protecting cardiomyocyte during I/R injury. In vivo study, we also found that Ad-miR-93 could attenuate myocardial I/R injury, manifested by reduced LDH and CK levels, infarct area and cell apoptosis in rats.

MiRNAs enforce their function via degradation or translational inhibition of their target mRNAs at the post-transcriptional level [13]. PTEN, a tumor suppressor gene, which was an essential regulator of cell proliferation, apoptosis, differentiation, migration, etc [14]. Recently, studies have found that PTEN plays an important role in myocardial remodeling, cardiac hypertrophy, myocardial fibrosis and myocardial ischemia reperfusion injury [15-17]. Based on bioinformatic analyses, PTEN was identified as a target of miR-93. Such a prediction was confirmed by a dual luciferase reporter assay. Therefore, PTEN is a functional target gene of miR-93 involved in cardiomyocyte protection against I/R injury.

PI3K/Akt is an intracellular signaling pathway, which also involve in the cardioprotection [18]. PI3K, when activated, has the ability to phosphorylate PIP2 into the secondary messenger PIP3 and lead the activation of Akt. When Akt is activated, it may product its antiapoptotic effects via the phosphorylation of two categories of downstream substrates: the antiapoptotic substrates (such as: Bcl-2, eNOs, p70s6k) and the proapoptotic substrates (such as bad, Bax, caspase9, GSK-3β) [19]. Moreover, PTEN is the main negative regulator of PI3K/Akt pathway [20]. So, our results showed that miR-93 can signal through a PTEN/Akt axis in the cardiomyocytes, which inhibits cardiomyocytes apoptosis during I/R injury.

This study provided evidence for the first time that miR-93 can decrease cardiomyocyte apoptosis induced by I/R via inhibiting PTEN and increasing nuclear AKT. PTEN may be the target gene of miR-93 against I/R-mediated cardiomyocyte apoptosis. miR-93 may be a potential drug target for treating cardiomyocyte I/R injury. Further research in human clinical trials are necessary to pave the way for miR-93 ultimate application in the clinic to benefit myocardial I/R patients.

H9c2 cells, which derived from Cell Bank of the Chinese Academy of Sciences, were cultured in DMEM containing 10% fetal bovine serum in a humidified incubator containing 5% CO2 at 37°C [5].

H9c2 cells were seeded into six-well plates and transfected with miR-93 mimics, miR-93 inhibitor, or miR-NC using HiPerFect Transfection reagent according to the manufacturer’s instructions. Subsequent experiments including H/R, RNA/protein extraction and apoptosis analysis were performed 24 h after miRNA transfection.

Sprague-Dawley rats (250-300 g) were anesthetized with pentobarbital, and the hearts were exposed. Then the Ad-miR-93 was respectively injected into the left ventricular anterior wall. The chest was closed after injection and the rat was allowed to recover. Myocardial I/R treatment was performed 4 days later. All the rats were re-anesthetized. The heart was exposed and the left anterior descending coronary artery (LAD) was ligated using silk suture for 30 min. Myocardial ischemia was confirmed by myocardial blanching and electrocardiography evidence of injury. Subsequent to that, the LAD was reperfused for 2 h. Then, the hearts and blood samples were obtained for further analysis. In the sham group, the heart was exposed without ligating the LAD. All animal experiments were approved by the animal ethics committee of the Fifth People’s Hospital of Shanghai, Fudan University.

MicroRNAs were isolated from cultured cells with a miRNeasy Mini Kit. The primers were as follows: pri-U6: 5ʹ-CTCGCTTCGGCAGCACA-3ʹ and 5ʹ-AACGCTTCACGAATTTGCGT-3ʹ; pri-miR-93: 5ʹ-AAGTGCTGTTCGTGCAGGT-3ʹ and 5ʹ-CTCGGGAAGTGCTAGCTCA-3ʹ. qPCR was performed on a Rotor-Gene 3,000 real-time DNA detection system using the TaqMan MicroRNA Assay kit in accordance with the manufacturer’s instructions. Gene expression was determined by comparing the data against the standard curve, and normalized against U6.

Detection of LDH, CK and MDA

Three specific marker enzymes, including the LDH, CK and MDA were measured using commercial kits according to manufacturer’s instructions.

H9c2 cells were incubated with 10 µM 2′, 7′-dichlorofluorescin-diacetate at 37°C for 30 min in the dark. Then, the plates were washed three times with phosphate-buffered saline. The DCFH-DA stain detecting ROS production was observed using a fluorescence microscope (Nikon, Japan).

The Annexin V-FITC/PI apoptosis detection kit was used to determine the cell apoptosis, according to the manufacturer’s instructions. After transfection, cells were harvested and resuspended in 200 μl binding buffer. Then, the cells were incubated with 10 μl Annexin V-FITC and 5 μl PI in the dark for 15 min. The apoptosis rate was evaluated by flow cytometric analysis.

A dual luciferase psiCheck-2 reporter plasmid was used to harbored the 3’-UTR of the PTEN. Site-directed mutagenesis of the miR-93 target-site in the PTEN-3’-UTR was performed using the Quick-change Mutagenesis Kit and named PTEN 3’-UTR-mut. For the mutated construct, the miR-93 target site AAAGTGC was substituted with a TTTCACG fragment. Transfection was performed in triplicate with miR-93 mimic and PTEN 3’-UTR-wild or PTEN 3’-UTR-mut. Co-transfection with non-targeting negative control RNA was performed as a control. The cells were harvested 24 h after transfection for luciferase activity using a dual luciferase reporter assay kit on a luminometer [5].

Samples were separated on SDS-polyacrylamide gels and transferred to PVDF membranes. For immunoblotting, PVDF membranes were blocked with 5% skim milk at room temperature for 2 h and probed with antibodies overnight at 4°C overnight followed by incubation with secondary antibody conjugated to horseradish peroxidase for 1.5 h. Bands were visualized with an enhanced chemiluminescence detection kit following the manufacturer’s instructions.

After reperfusion, 3 mL 2% (w/v) Evans blue was injected into to the left anterior descending coronary artery in order to visualize ischemic and non-ischemic areas. After washing, cooling, and sectioning, the left ventricle slice was stained with 1% TTC (pH 7.4) at 37°C for 15 min. TTC did not stain the infarcted myocardium, thus showing white in color while nonischemic myocardium was stained by TTC and showed brick-red in color. Results were analyzed for the infarcted area using the Image J software and expressed as the percentage of left ventricular volume for each heart.

Experiments were performed in triplicate and data were expressed as mean ± standard deviation (SD). Statistical significance was determined by one-way analysis of variance (ANOVA). A value of P < 0.05 was considered statistically significant.

This work was supported by of Minhang District Natural Science Funds, Shanghai, China (No. 2014MHZ036).