Colorectal cancer (CRC) is the third most common cancer and the fourth most major cause of malignancies death, accounting for ~1.2 million new cases and ~600,000 deaths annually worldwide [1]. Several significant efforts have been devoted to identify the etiology of CRC; however, the accurate mechanism of CRC carcinogenesis remains unknown.

Wnt signaling pathway plays critical roles in gene functions during normal to malignant development and transcriptional programs of cell self-renewal [2]. Abnormal activation of Wnt signaling pathway is reported to be associated with a variety of human cancers such as CRC, breast cancer and prostate cancer [3–7]. The great majority (> 90%) of CRC carries mutation of at least one gene in Wnt signaling pathway [8]. β-catenin as a key effector phosphorylates and targets for degradation by Axin complex, which is inhibited in respond to Wnt stimulation. This process flow allows unphosphorylated β-catenin to accumulate and bind with the nuclear TCF/LEF to stimulate the transcription of Wnt target gene, resulting in recruiting chromatin modifying and remodeling a range of transcriptional complex and co-factors [9–11]. Well-established transcriptional complexes and co-factors involving B-cell CLL/lymphoma 9 protein (BCL-9), Pygopus (PYGO) and polymerase-associated factor 1 (PAF1) have been reported to be recruited by β-catenin [9].

BCL-9, one of the crucial counterparts of the nuclear component Legless (Lgs) in Wnt pathway, is highly expressed in human CRC tissues, and the BCL-9/β-catenin complex has been identified as a crucial target for cancer therapy [12]. The molecular role of BCL-9 is currently debated. One function of Lgs/BCL-9 proteins could recruit transcriptional co-factors synergized with β-catenin and its co-factors during the transcription of TCF target genes. Likewise, they could capture nuclear β-catenin to facilitate its recruitment to TCF target genes [9, 13]. However, there are very little studies working on the mechanisms of regulation on BCL-9 and its co-factors related functional. In this study, we focused on the mechanism of regulation on BCL-9 via hypoxia signaling pathway, and hypothesized that BCL-9 in both Wnt and hypoxia signaling plays a vital role on the carcinogenesis of human CRC.

Association between BCL-9 expression and clinicopathological parameters in CRC patients 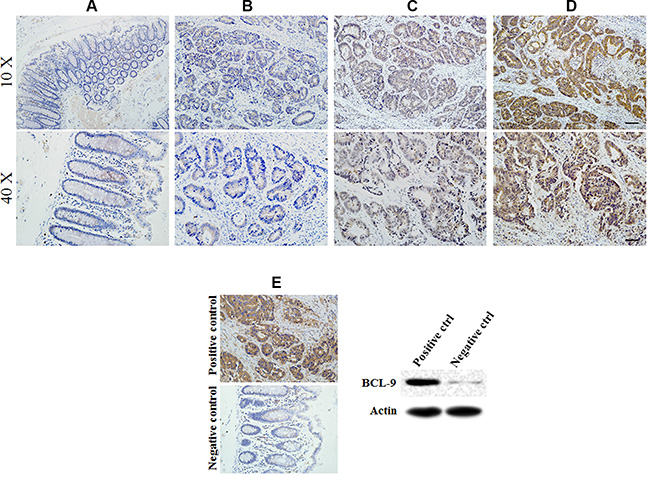 We have shown that a high percentage of human colorectal cancer specimens display elevated BCL-9 expression levels, but the underlying mechanism for the increased expression of BCL-9 in CRC is unclear. So we introduce the microenvironment Hypoxia, a hallmark of solid tumors including CRC. Interestingly, we found that BCL-9 expression was induced by hypoxia. Human CRC cell lines SW480 and HCT116 cells were treated by hypoxia (0.1% O2). The effective induction of hypoxia in cells was confirmed by the increased expression of VEGF, a hypoxia-responsive gene, at mRNA levels and the increased protein levels of HIF-1α and HIF-2α, the major hypoxia inducible factors. Notably, BCL-9 mRNA levels were significantly increased (p < 0.01) in both SW480 and HCT116 cells cultured under the hypoxic condition as determined by real-time PCR (Figure 2A–2B). The induction of BCL-9 expression by hypoxia was confirmed at the protein levels in these cells by using Western-blot assay (Figure 2C). These data clearly demonstrated that hypoxia induces BCL-9 expression in human colorectal cancer cells. 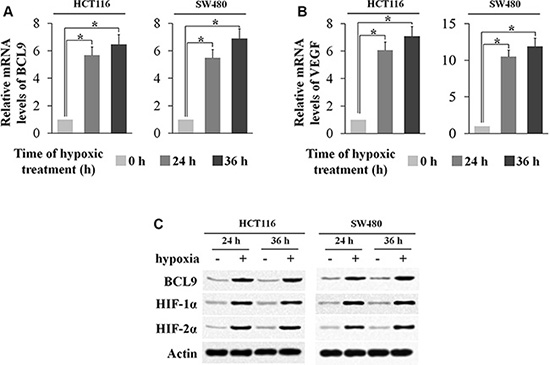 The transcriptional response to hypoxia in cells is largely mediated by HIFs. HIF-1α and HIF-2α induce a number of common genes, and at the same time they each have their unique target genes. To investigate whether the transcriptional induction of BCL-9 by hypoxia is activated by HIFs, we searched for the HRE consensus sequence in the promoter region of the BCL-9 gene from 3 kb upstream of transcriptional start site. Three putative HRE sites (HRE-A, HRE-B and HRE-C) were identified in the promoter region of the BCL-9 gene (Figure 3A). To investigate whether these putative HREs account for the hypoxia-mediated induction of BCL-9, the DNA fragments containing one copy of these putative HRE sites were inserted into a pGL2 luciferase reporter plasmid. VEGF is a well-known hypoxia-inducible gene. HIFs physically bind with the HRE in the VEGF promoter and induce VEGF expression levels under hypoxia. The DNA fragment containing the HRE in the VEGF promoter was inserted into a pGL2 luciferase reporter plasmid to serve as a positive control. SW480 and HCT116 cells were transiently transfected with these reporter constructs, and then exposed to hypoxia for 36 h. TK100 plasmids was co-transfected as an internal standard to normalize transfection efficiency. As shown in Figure 3B, hypoxia clearly enhanced luciferase expression levels of the reporter plasmids containing the HRE from the VEGF promoter, the HRE-B and HRE-C from the BCL-9 promoter, but did not have a clear effect on HRE-A form the BCL-9 promoter in both cells. These results indicate that hypoxia transactivates the BCL-9 promoter containing functional HREs (HRE-B and HRE-C). 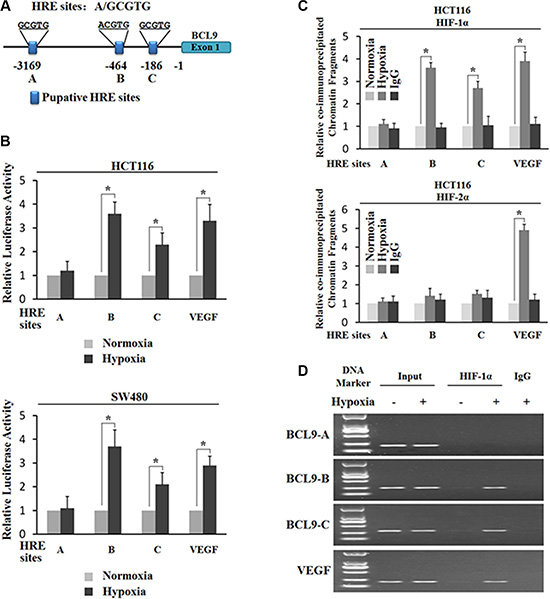 Figure 3: Hypoxia transactivates hypoxia-responsive elements (HREs) in the BCL-9 promoter through HIF-1α. (A) The human BCL-9 gene contains 3 putative HREs in the promoter region. (B) Hypoxia activates the luciferase activity of reporter vectors containing HRE-B or HRE-C sites in the BCL-9 promoter. SW480 and HCT116 cells were transfected with the luciferase reporter vectors, and then subjected to hypoxia treatment for 36 h before measuring luciferase activities. Luciferase reporter vectors containing the HRE site in the VEGF promoter was included as a positive control. (C) and (D) HIF-1α but not HIF-2α binds to HRE-B and HRE-C sites in the BCL-9 promoter under the hypoxic condition in HCT116 cells as determined by ChIP assays. Cells were cultured under the hypoxic or normoxic conditions for 36 h before assays. The HRE site in the VEGF promoter serves as a positive control. The amount of DNA fragments pulled-down was determined by real-time PCR (C) or conventional PCR (D). Data are presented as mean ± SD (n = 3). *p < 0.01 (Student’s t-test). 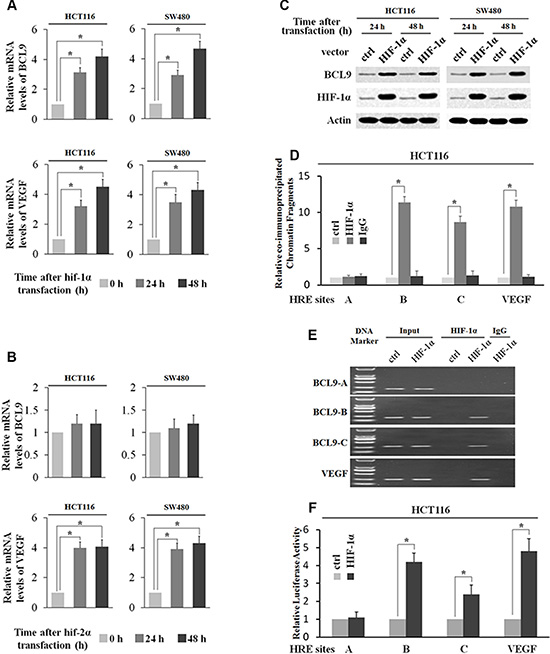 HIF-1α activates the induction of BCL-9 expression by hypoxia 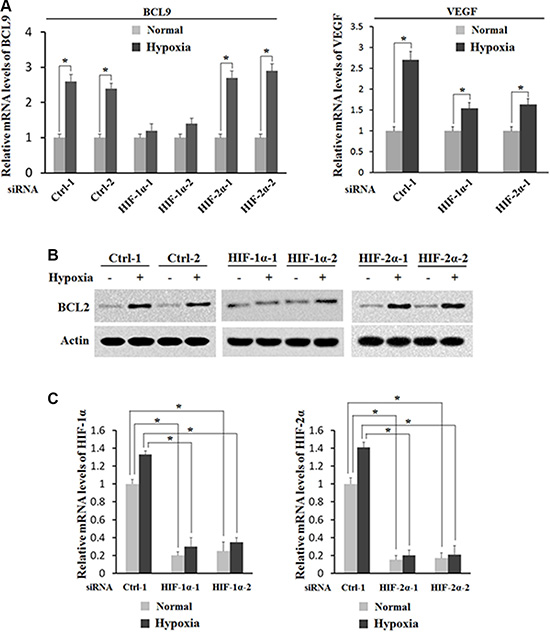 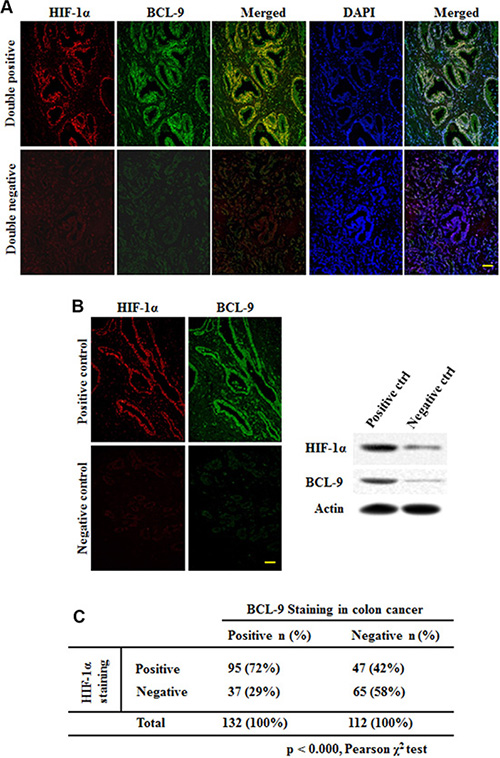 Hypoxia-signaling pathway as a classic hallmark of solid tumor was widely concerned. Due to restricted blood flow, tumor cells experienced hypoxic condition that inhibited cell proliferation and altered energy metabolism from oxidative phosphorylation to glycolysis pathway, resulting in modifications of hypoxia-inducible genes expressions [14, 15]. These are mediated by the hypoxia inducible factors (HIFs), which contained three HIF-α (HIF-1α, HIF-2α and HIF-3α) and two HIF-β (HIF-1β and HIF-2β) [16]. Compared to the Wnt signaling, the hypoxia signaling does not require secreted or transmembranous proteins but does sense oxygen concentrations instead. Once activated under hypoxia, HIF-α are facilitated and dimerized with HIF-1 β; this complex binds to HRE and triggers transcription of target genes such as vascular endothelial growth factor (VEGF), leading to stimulation of carcinogenesis [17, 18]. Since there was a crosstalk with different signaling pathways like hypoxia, Hedgehog and Wnt pathway, it was suggested that carcinogenesis is often dependent on at least two pathways [24]. In our study, one of the first evidence for crosstalk between Wnt and hypoxia signaling emerged when hypoxia leaded to upregulation of the key Wnt co-activatior BCL-9 in HIF-1α/2α-correlated manners, suggesting that hypoxia pathway might promote oncogenic Wnt signaling by recruiting HIF-α/BCL-9 interaction.

HIF-1α and HIF-2α are often overexpressed in solid tumors and tumor-derived cell lines [19]. Although sometimes both these proteins share similar properties mainly via transcriptional regulation of common target genes, they each target own genes contributing to specific characteristics [20, 21]. In addition, the different selection of HIF-1α and HIF-2α target genes can be contributed by interacting with different transcription factors and/or chromatin context [22, 23]. Base on this characteristic of HIFs, in our study, we found that BCL-9 promoter contains 3 putative HRE sites including HRE-A, HRE-B and HRE-C. Meanwhile ChIP assays showed that HIF-1α but not HIF-2α bound with HRE-B and HRE-C but not HRE-A in the BCL-9 promoter under hypoxic condition. Moreover, knockdown of HIF-1α but not HIF-2α largely abolished hypoxia-induced BCL-9 expression. These results clearly demonstrate that BCL-9 is a target gene for HIF-1α but not HIF-2α. Intriguingly, transfection and knockdown of either HIF-1α or HIF-2α can respectively promote and inhibit hypoxia-induced VEGF expression, suggesting that VEGF is a common identical target gene for hypoxia signaling pathway.

In summary, this study demonstrated that BCL-9 expression could be induced by hypoxia in human CRC cells; BCL-9 induction under hypoxic condition is predominantly activated by HIF-1α. Given the critical role of BCL-9 in Wnt signaling pathway promoting carcinogenesis and chemo-resistance, the specific regulation of BCL-9 expression by HIF-1α is considered to be a underlying crosstalk between Wnt signaling and hypoxia signaling pathway, providing foundation for further study to develop new target of potential therapeutic strategies by blocking HIF-1α/BCL-9 signaling related expression in CRC.

A total of CRC specimens were obtained from patients who underwent colectomy at the Department of Surgery, Changzheng Hospital, Second Millitary Medical University, Shanghai, China, from January 2012 to October 2015. None of the patients in our study received neoadjuvant chemotherapy. Information on patient gender, age, invasive depth, lymph node metastasis, distant metastasis, AJCC TNM stage and tumor pathological type were summarized in Table 1. The tumor pathological types of the samples were assessed by the experienced colorectal pathologists. Informed consent forms were signed from all patients and the research protocol was approved by the Ethics Committee.

Tumor tissues or other samples were fixed with 4% paraformaldehyde and were then dehydrated through a graded series of ethanol, embedded in paraffin and sectioned at 5 μm. Immunohistochemical staining for BCL-9 was carried out using standard histological procedures described in the manual for Histostain-Plus IHC Kit, DAB (Phygene). BCL-9 staining was scored in accordance by two investigators with previous protocols as negative (−), weak positive (+), or strong (++). Scoring was performed blindly with respect to the histologic grade of CRC specimens.

Data was expressed as mean ± SD. The association between HIF-1α expression levels and BCL-9 expression levels examined by IF were analyzed by Pearson chi-square test. Associations between BCL-9 expression examined by IHC and clinicopathological variables were analyzed by non-paramentric analysis: Mann Whitney U test for 2 samples and Kruskal Wallis H test for more than 2 samples. All other p values were obtained by using two-tailed Student’s t-test. Values of p < 0.05 were considered to be significant.

Authors thank the experts responsible for the maintenance of Cancer Registry and Death Certification Systems of Shanghai for their great help in the follow-up study.