Castration resistant prostate cancer (CRPC) is characterized by increased activation and/or overexpression of androgen receptor (AR) resulting in the transcription of downstream target genes and tumor progression despite castrate levels of androgen in the patient. At this stage of prostate cancer progression, there are currently several agents in use to stop or reverse tumor growth. Amongst these is abiraterone. Abiraterone is a steroidogenesis inhibitor of the androgen synthesis pathway and functions by blocking CYP17A1 activity and preventing the conversion of pregnenolone to dihydrotestosterone (DHT) [1, 2]. This results in significant loss of androgen production in peripheral tissues and loss of production of precursors needed for intratumoral androgen synthesis. Recently, abiraterone was discovered to be converted by 3β-hydroxysteroid dehydrogenase (3β-HSD) to a more active Δ4-abiraterone (D4A) form which blocks multiple steroidogenic enzymes and antagonizes the androgen receptor [3]. Abiraterone treatment in patients who had progressed after docetaxel therapy demonstrated a 3.9 month survival benefit and chemotherapy-naïve patients had a 4.4 month survival benefit with abiraterone [4-6]. It is unfortunate, however, that one-third of all patients display primary resistance to abiraterone treatment, and all patients with initial response progress by 15 months of abiraterone treatment [4].

Several pathways have been identified which may play a role in the development of abiraterone resistance, many of which involve re-activation of androgen synthesis or changes in androgen receptor signaling [14–18]. Of interest in the presented study, is the role of androgen receptor variants. These variants are produced due to alternative splicing or by genome rearrangement and oftentimes result in loss of the AR ligand binding domain leading to constitutive activation of the receptor [19–22]. Of these variants, androgen receptor variant 7 (AR-V7) is the most widely studied and its expression is associated with resistance to multiple therapeutics including enzalutamide and abiraterone[14, 16, 23–25]. Clinically, Antonarakis et al. demonstrated that patients treated with enzalutamide or abiraterone that had AR-V7 expression displayed significantly lower PSA response, shorter progression-free and overall survival compared to men without AR-V7 [26].

To further examine the sensitivity of prostate cancer cells to abiraterone, LNCaP, C4-2B and CWR22Rv1 cells were treated with different concentrations of abiraterone for 48 hours. CWR22Rv1 cells are more resistant to abiraterone treatment than LNCaP and C4-2B cells (Figure 2A). The AR-V7 expression was examined by western blot. As shown in Figure 2B, CWR22Rv1 cells express significantly higher AR-V7 than LNCaP and C4-2B cells. Previous studies have shown that AR-V7 might be an important player for driving enzalutamide resistance in prostate cancer cells [24, 27]. To examine whether it also induces abiraterone resistance, CWR22Rv1 and C4-2B MDVR cells were transiently transfected with AR-V7 siRNA and subsequently treated with 10 μM abiraterone for 3 days. As shown in Figure 2C, knockdown of AR-V7 significantly enhanced abiraterone treatment in both CWR22Rv1 and C4-2B MDVR cells. The effects of AR-V7 knockdown were examined by western blot (Figure 2D). To determine whether overexpression of AR-V7 confers resistance to abiraterone, we generated AR-V7 overexpressing C4-2 AR-V7 cells by stably expressing AR-V7 in C4-2 cells. C4-2 neo and C4-2 AR-V7 were treated with different concentrations of abiraterone for 48 hours and cell numbers were determined. C4-2 AR-V7 cells exhibited resistance to abiraterone treatment compared to C4-2 neo cells (Figure 2E). Abiraterone inhibits full length AR but not AR-V7 expression in C4-2 AR-V7 cells (Figure 2F). These results demonstrate that overexpression of AR-V7 confers resistance to abiraterone in prostate cancer cells. 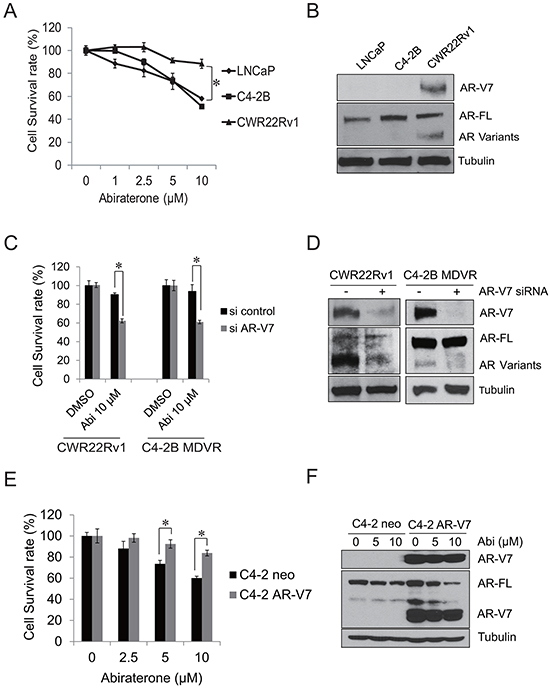 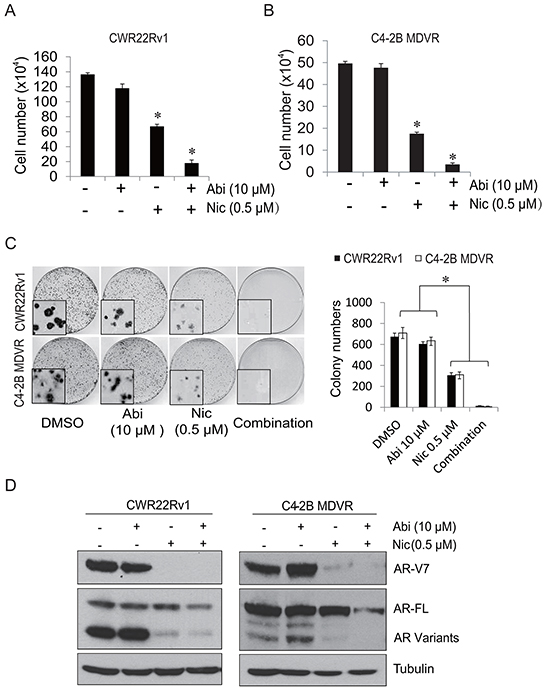 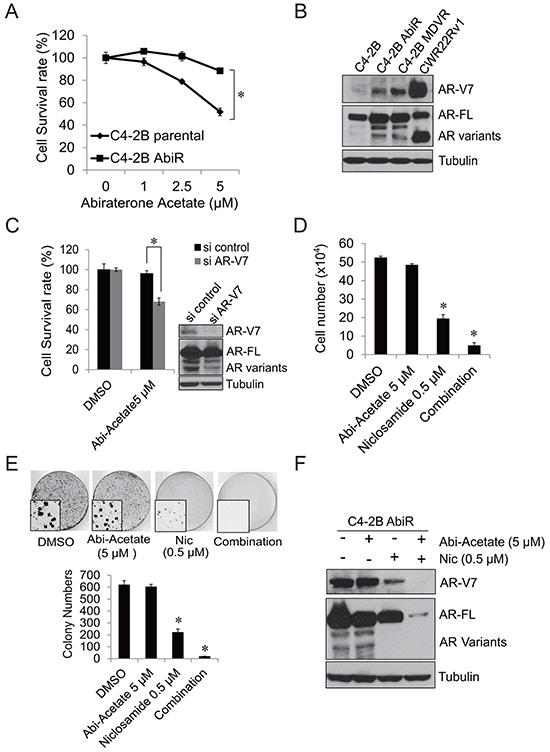 Niclosamide synergizes abiraterone treatment in vivo through the oral administration 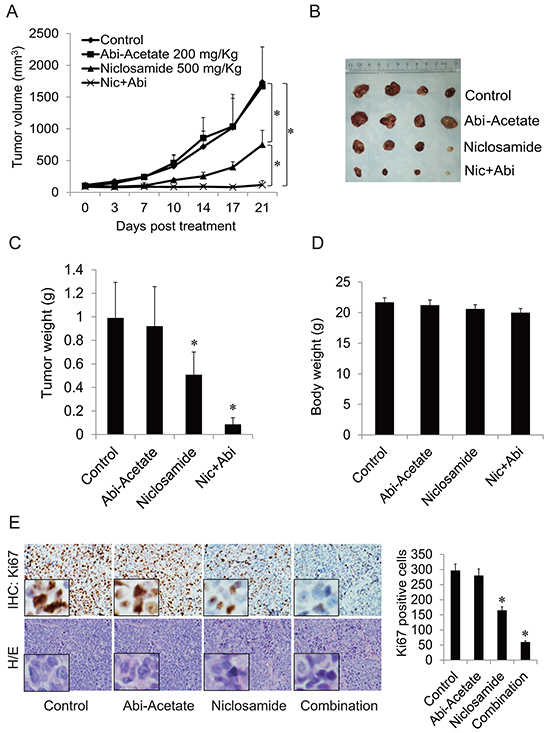 Figure 5: Niclosamide enhanced abiraterone treatment in vivo. A. Mice bearing CWR22Rv1 xenografts were treated with vehicle control, abiraterone acetate (200mg/Kg orally), niclosamide (500 mg/Kg orally) or their combination for 3 weeks, tumor volumes were measured twice every week and the tumors were collected. B. Pictures of tumors from each group were taken after 3 weeks treatment. C–D. Each group tumor weight and body weight were measured and averaged. E. Ki67 was analyzed in tumor tissues by IHC staining and quantified as described in methods. *P<0.05 Abi-Acetate: Abiraterone Acetate.

Both abiraterone and enzalutamide are FDA approved drugs. When prostate cancer becomes resistant to one drug, the subsequent response rate to the other drug is 20% or less [8, 30, 31], suggesting cross-resistance exists between these two drugs. However, the underlying mechanisms are incompletely understood. The role of AR splice variants in CRPC has been functionally characterized in recent years due to their prevalence in advanced prostate cancer tissues [21, 32, 33]. Truncated AR variants including AR-V7 have been suggested to drive castration resistant growth and AR target genes expression leading to resistance to enzalutamide [23, 24]. In the present study, we showed that cells which are resistant to enzalutamide are also resistant to abiraterone, and that AR-V7 overexpression confers resistance to abiraterone. Chronic treatment of C4-2B cells with abiraterone significantly induced AR-V7 protein expression; while overexpression of AR-V7 in C4-2 cells drives these cells become resistant to abiraterone. Knock down of AR-V7 expression by siRNA in CWR22Rv1, C4-2B MDVR and C4-2B AbiR cells significantly restored their sensitivity to abiraterone treatment, suggesting that AR-V7 plays an important role in the development of abiraterone resistance in addition to enzalutamide resistance.

Abiraterone inhibits CYP17A1 and reduces circulating androgen levels that activate the full length AR. A recent report also showed that abiraterone could be converted to D4A, a more active form which antagonizes full length AR directly [3]. While AR-V7 overexpression confers resistance to current anti-androgen therapies, AR-V7 is not suppressed by abiraterone. Therefore, there is an urgent need to develop novel agents that inhibit AR-V7 to overcome drug resistance. Our previous studies identified niclosamide as a potent inhibitor of AR-V7, and found that it significantly enhances enzalutamide treatment both in vitro and in vivo [27]. Niclosamide is an FDA approved drug for the treatment of human tapeworm infection and has rich repository of pharmacokinetic data [34-36]. Niclosamide has been proven to be safe and has very low toxicity in patients [37-41], and therapeutic blood concentrations can be achieved through oral administration using FDA approved administration dose. In the present study, we showed that niclosamide enhanced abiraterone treatment through oral administration in prostate cancer xenograft model, suggesting the combination of niclosamide and abiraterone warrants clinical investigation to treat advanced prostate cancer patients.

Taken together, we found that AR-V7 is involved in the cross resistance of enzalutamide and abiraterone. Targeting AR-V7 by siRNA or inhibition of protein expression by niclosamide can significantly enhance abiraterone treatment in vitro and in vivo. These data support the combination of abiraterone and niclosamide as a potential treatment for advanced prostate cancer.

For small interfering RNA (siRNA) transfection, cells were seeded at a density of 1×105 cells per well in 12-well plates or 3×105 cells per well in 6-well plates and transfected with siRNA (Dharmacon) targeting the AR-V7 sequence (GUAGUUGUAAGUAUCAUGA) [42] or a control siRNA targeting the luciferase (Luc) gene, non-targeting siRNA control (CTTACGCTGAGTACTTCGA), using Lipofectamine 2000 (Invitrogen).

C4-2B parental or C4-2B MDVR cells were treated with DMSO, 5 μM, 10 μM or 20 μM abiraterone, or 10 μM or 20 μM enzalutamide in media containing 10% complete FBS. CWR22Rv1 cells, C4-2B MDVR or C4-2B AbiR cells were treated with niclosamide with or without abiraterone. Cells were plated at equal densities (2000 cells/dish) in 100 mm dishes for 14 days; the medium was changed every 7 days. The colonies were rinsed with PBS before staining with 0.5% crystal violet/4% formaldehyde for 30 min and the numbers of colonies were counted as described previously [44].

Tumors were fixed by formalin and paraffin embedded. Tissue sections were dewaxed, rehydrated, and blocked for endogenous peroxidase activity. Antigen retrieval was performed in sodium citrate buffer (0.01 mol/L, pH 6.0) in a microwave oven at 1,000 W for 3 min and then at 100 W for 20 min. Nonspecific antibody binding was blocked by incubating slides in 10% fetal bovine serum in PBS for 30 min at room temperature. Slides were then incubated with anti-Ki-67 (at 1:500; NeoMarker) at room temperature for 30 min. Slides were then washed and incubated with biotin-conjugated secondary antibodies for 30 min, followed by incubation with avidin DH-biotinylated horseradish peroxidase complex for 30 min (Vectastain ABC Elite Kit, Vector Laboratories). The sections were developed with the diaminobenzidine substrate kit (Vector Laboratories) and counterstained with hematoxylin. Nuclear staining of cells was scored and counted in 5 different areas of the tissue section. Images were taken with an Olympus BX51 microscope equipped with DP72 camera.

All data are presented as means ± standard deviation of the mean (SD). Statistical analyses were performed with Microsoft Excel analysis tools. Differences between individual groups were analyzed by one-way analysis of variance (ANOVA) followed by the Scheffé procedure for comparison of means. P < 0.05 was considered statistically significant.

40. Jones WE. Niclosamide as a treatment for Hymenolepis diminuta and Dipylidium caninum infection in man. The American journal of tropical medicine and hygiene. 1979; 28:300-302.