Acute myeloid leukemia (AML) is a serious disease of the hematopoietic system characterized by de-differentiation and uncontrolled proliferation of immature hematopoietic precursor cells in the bone marrow [1]. It is usually based on many parameters including age, white blood cell count, cytogenetic abnormalities, and specific mutations [2]. AML results from the accumulation of genetic and epigenetic alterations during the multistep process of tumorigenesis, including activation of oncogenes and/or inactivation of tumor suppressor genes.

The Wilms’ tumor gene 1 (WT1), located at chromosome 11p13, was firstly cloned in 1990 as a suppressor in Wilms’ tumor [3]. WT1 regulates transcription, RNA metabolism, translation and both oncogenic and tumor suppressor functions [4]. Since the expression of WT1 in many solid cancers is upregulated, it is considered as a potential oncogene [5]. Although the pathogenesis of WT1 in leukemia has not been completely revealed, the phenomenon that low expression of WT1 and high expression of WT1 are accompanied with clinical remission and relapse respectively shows that WT1 may be a potential prognostic factor in acute leukemia [6].

Although a number of studies suggested that WT1 rs16754 polymorphism might be related to decreased relapse free survival (RFS) and overall survival (OS). The results remain controversial [7-18]. In this study, meta-analysis of the association between WT1 rs16754 polymorphism and OS and RFS of AML was conducted. Twelve studies involving 3903 patients with AML are pooled in the meta-analysis. 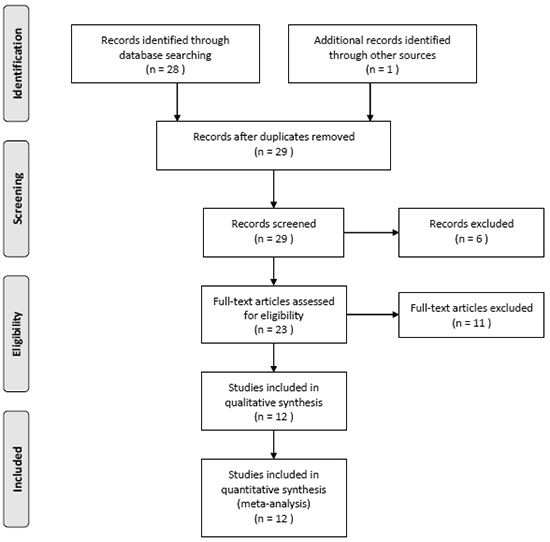 Association between WT1 rs16754 polymorphism and OS of AML

Figure 2: Meta-analysis of the association between WT1 rs16754 polymorphism and OS of AML.

Table 2: Results of the meta-analysis

Association between WT1 rs16754 polymorphism and RFS of AML

Figure 3: Meta-analysis of the association between WT1 rs16754 polymorphism and RFS of AML.

The results of sensitivity analyses showed that the estimates before and after the deletion of each study were similar (Figures 4 and 5). The shapes of the funnel plot seemed symmetrical (Figures 6 and 7), suggesting that there was no obvious publication bias. 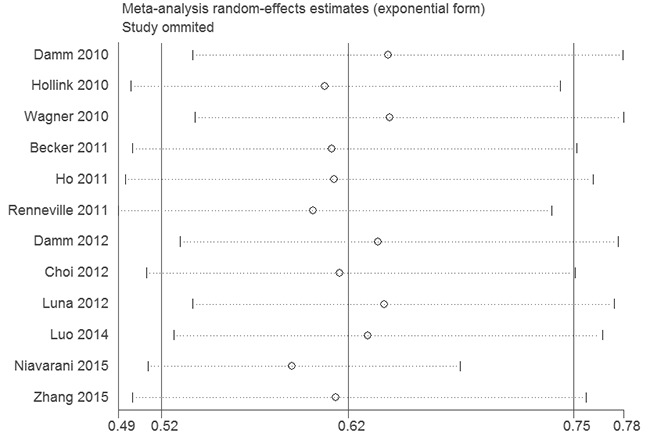 Figure 4: Sensitivity analysis of the association between WT1 rs16754 polymorphism and OS of AML. 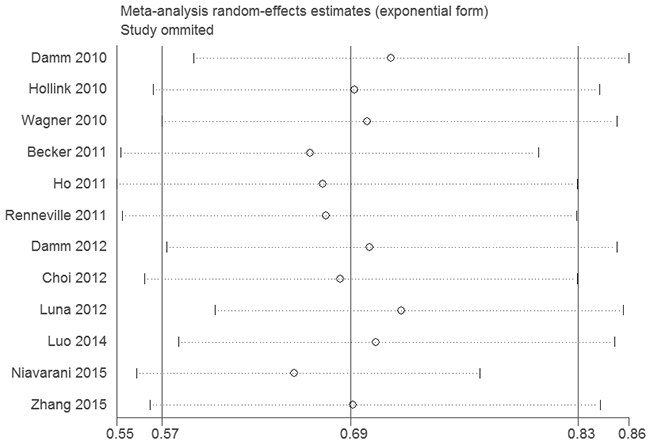 Figure 5: Sensitivity analysis of the association between WT1 rs16754 polymorphism and RFS of AML. 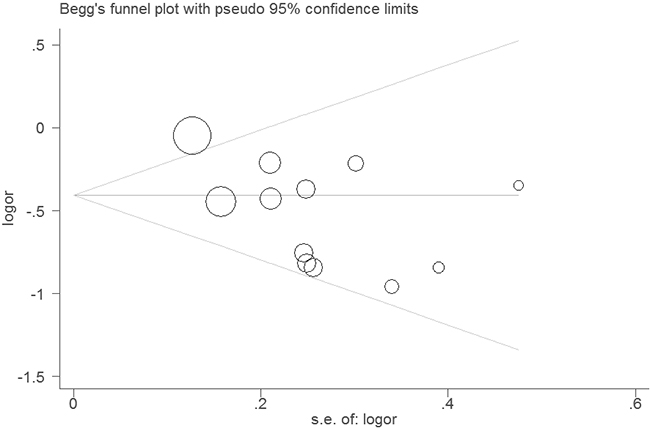 Figure 6: Funnel plot of the association between WT1 rs16754 polymorphism and OS of AML. 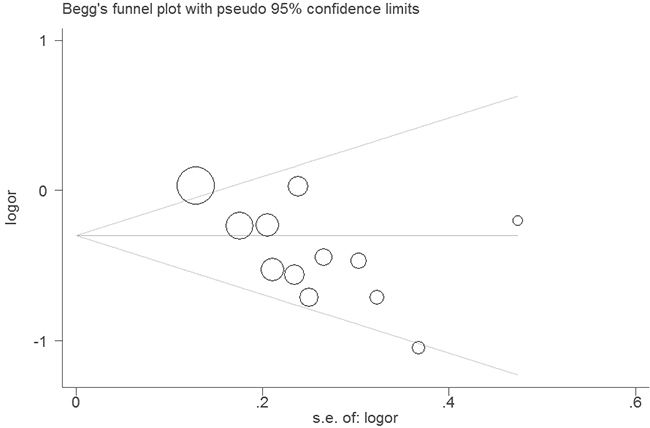 Figure 7: Funnel plot of the association between WT1 rs16754 polymorphism and RFS of AML.

WT1 expression is detectable in CD34+ progenitor cells, but is down-regulated during the process of hematopoietic differentiation, and undetectable in mature leukocytes [19]. WT1 overexpression could be observed in the majority of AML patients at diagnosis, which disappeared when complete remission (CR) was achieved by chemotherapy. Hence, WT1 expression has been regarded as a potential biomarker for the detection of minimal residual dis-ease (MRD) in clinic [20]. Ujj et al. also suggested that disappearance of WT1-positivity during chemotherapy had a favorable effect on survival [21]. Casalegno-Garduño et al. indicated that WT1 is a suitable marker for the detection of minimal residual disease after SCT or chemotherapy [22]. Recently, analysis of WT1 expression in circulating RNA in plasma in AML patients could be a simple, convenient and noninvasive method to predict latent information about relapse [23]. WT1 rs16754 polymorphism consists in a change ofthe nucleotide adenine (A) into guanine (G). Zhang et al. found that the WT1 GG patients showed significantly higher WT1 mRNA expression than the WT1 GA/AA patients [18]. Thus, it might be the reason for why WT1 rs16754 polymorphism could influence the survival of AML.

We performed sensitivity analysis by excluding studies to verify the stability of results. However, this present study also has some limitations. First, the sample size was relatively small in subgroup analyses. Second, significant heterogeneity was detected in included studies and the accuracy of results would be affected in spite of utilizing the random-effects model to calculate pooled ORs. Third, we didn’t explore gene-gene and gene-environment interactions because of the insufficient data. Finally, this study is a meta-analysis of case-control study and cohort study. Confounding cannot be avoided and should be considered.

In conclusion, WT1 rs16754 polymorphism is associated with better survival of AML. It could be used as a cost-effective prognostic biomarker for AML.

Published reports were searched in PubMed, EMBASE, and Google Scholar, with the following key words: “acute myeloid leukemia” and “Wilms’ tumor gene 1”. The MeSH terms, such as “leukemia, myeloid, acute” and “genes, wilms tumor”, were used. Publication language was not restricted in this search. Reference lists of articles retained for review were examined manually to further identify potentially relevant reports.

Two reviewers independently screened the abstracts of papers identified by the literature search, retrieved potentially relevant studies and determined study eligibility. Studies were included if: (1) study design was prospective or retrospective cohort study; (2) the exposure of interest was WT1 rs16754 polymorphism; (3) the studied reported relative risks (RRs), hazard ratios (HRs), or odds ratios (ORs) with corresponding 95% confidence intervals (CIs); and (4) the outcome was RFS or OS. If the same cohort was used in more than one publication, we included the publication that reported the results in greater detail or, if similar, the one with the largest number of cases. Data published only in abstract form were excluded. Case reports, review articles and commentary articles were also excluded.

The following data including: the first author, year, study design, ethnicity of the study population, age, sex, subtype, number of patients included in analysis, adjusted factors, and OR with its 95% CI for OS and RFS were extracted from each eligible study by two investigators.

The strength of association between WT1 rs16754 polymorphism and RFS and OS of AML was evaluated by calculating the OR and 95% CI. To assess the significance of OR, we conducted the Z test and we regarded it as significant difference when P value less than 0.05 was detected. Moreover, X2 based Q and I2 test were performed to evaluate the between-study heterogeneity and P<0.1 was defined as statistical significance. The random-effects was used to calculated the OR if significant heterogeneity existed. Otherwise, the fixed-effects model was applied. Furthermore, we also conducted subgroup analyses stratified by ethnicity (Caucasian and Asian), age (child and adult), and subtype of AML. Publication bias was assessed by asymmetry of funnel plots. In sensitivity analysis, we sequentially excluded each study on the software to evaluate the stability of the results. We conducted all the analyses by using software Review Manager 5.1 (Nordic Cochrane Center, Copenhagen, Denmark) and STATA 11.0 software (Stata Corporation, College Station, TX, USA).

19. Maurer U, Brieger J, Weidmann E, Mitrou PS, Hoelzer D, Bergmann L. The Wilms’ tumor gene is expressed in a subset of CD34+ progenitors and downregulated early in the course of differentiation in vitro. Exp Hematol. 1997;25:945-950.