Metabolic changes in cancer cells support higher rates of cell proliferation and growth compared to normal cells [1–8]. Most cancer cells rely on glycolysis more than mitochondrial oxidative phosphorylation for ATP production, even in the presence of oxygen; as a consequence, they exhibit increased glucose (Glc) uptake and lactate (Lac) production [1–3]. This phenomenon, termed the “Warburg effect” or glycolytic switch, is thought to increase the availability of biosynthetic precursors for nucleotides, lipids, and amino acids required for cancer cell proliferation. Glutamine (Gln) metabolism is also enhanced in many cancers [1, 2, 4–8]. Gln metabolism refills the pool of TCA cycle intermediates (anaplerosis), which are removed from mitochondria to participate in biosynthetic reactions for lipids, nucleic acids, and proteins (cataplerosis) [9–11]. Thus, Gln anaplerosis is crucial in maintaining cancer cell growth and development. Glutaminase (GLS), which converts Gln to glutamate, is the first enzyme in Gln anaplerosis [10, 11]. There are two types of GLS in mammalian cells: the kidney type GLS1 and the liver type GLS2. GLS1 is important in cancer development and progression [12–17], and its levels are increased in many tumors, including breast and prostate cancer and hepatocellular carcinoma (HCC) tissues, compared to normal tissues [17, 18]. GLS1 shRNA (shGLS1), and the GLS-specific inhibitors bis-2-(5-phenylacetamido-1,3,4-thiadiazol-2-yl)ethyl sulfide (BPTES) and 968, reduce the growth of several cancer types in xenograft models [10, 14, 17].

Epithelial-mesenchymal transition (EMT) is essential for the initiation of metastasis, which is the most common cause of death in cancer patients [19–23]. EMT involves profound phenotypic changes, including the loss of epithelial cell polarity following reductions in levels of epithelial proteins, such as E-cadherin, and increases in levels of mesenchymal proteins, such as vimentin, that upregulate mesenchymal migration and invasion [19, 22]. EMT contributes to chemoresistance and cancer stem cell-like phenotypes. Snail, the major transcription factor in EMT, triggers metastasis in response to several oncogenic signaling pathways, including transforming growth factor (TGF)-β and Wnt, in breast carcinoma, prostate cancer, and colorectal cancer [24–28]. Recently, Snail has been shown to induce glycolytic switch, suppress mitochondrial respiration and cytochrome c oxidase activity [29], and suppress fructose-1,6-biphosphatase expression [30]. Glc metabolism may therefore regulate the induction of EMT.

Recently, we showed that distal-less homeobox-2 (Dlx-2), a homeodomain transcription factor involved in embryonic [31, 32] and tumor development [33–36], induces EMT and a glycolytic switch by increasing Snail expression [37]. Because Dlx-2 induces glycolytic switch via Snail induction, we postulated that Dlx-2 may activate other oncogenic metabolic pathways. We examined the effects of Dlx-2 on the expression of GLS1 and Gln metabolism. We also studied the impact of GLS1 knockdown on in vivo tumor metastasis and growth. To determine whether GLS1 and Gln metabolism influence TGF-β/Wnt/Dlx-2/Snail-induced EMT and glycolytic switch, we examined p53-dependent regulation of Snail-targeting microRNAs (miRNAs) and Snail mRNA stability. Finally, we measured levels of Dlx-2, GLS1, Snail and Snail-targeting miRNAs in human cancer tissues. These experiments clarified the role of the Dlx-2/GLS1 axis in TGF-β/Wnt-induced, Snail-dependent EMT, metastasis, and glycolytic switch.

GLS1 is induced by Dlx-2

Because Dlx-2 induces glycolytic switch by inducing Snail expression [37], we postulated that Dlx-2 may activate other oncogenic metabolic pathways.

Most cancer cells depend on enhanced Gln metabolism for growth and survival in addition to Glc metabolism [2, 4–8]. GLS1, which converts Gln to glutamate [10, 11], is the first enzyme involved in Gln anaplerosis. Because of its importance for Gln anaplerosis, we focused on Dlx-2-induced changes in GLS1 mRNA levels, even though they only increased 2-fold in the microarray data.

Because shGLS1 and GLS inhibitors reduce growth in several types of cancer cell xenografts [10, 14, 17], we examined the in vivo effects of shGLS1 on tumor growth and metastasis. HCT116 cells stably transfected with shCon or shGLS1 were injected subcutaneously into the dorsal flank of nude mice, which were then monitored for tumor growth. shGLS1 reduced tumor growth compared to shCon throughout the experiment (Figure 2A–2D). 28 days after injection, shGLS1 decreased tumor volume by 30% and weight by 64% relative to shCon (Figure 2A–2C). 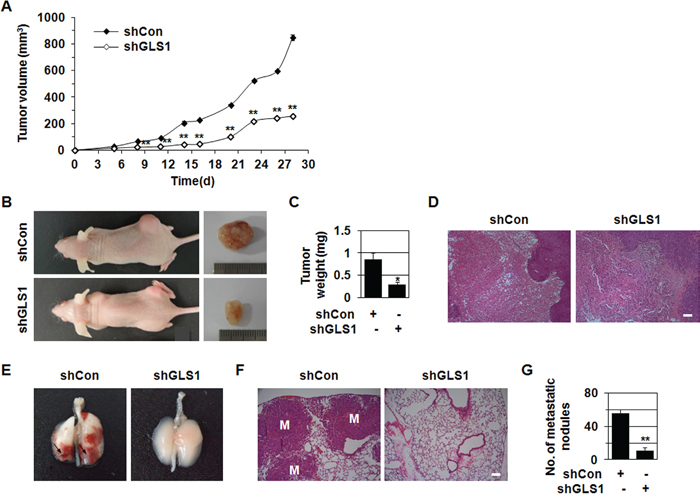 Metastasis is the most common cause of death in cancer patients [20, 21, 23]. Thus, we investigated the effect of shGLS1 on pulmonary metastasis in vivo. HCT116 cells stably transfected with shCon or shGLS1 were injected into the lateral tail vein of nude mice. 48 days after injection, lungs were harvested to evaluate tumor metastasis. shGLS1 reduced the number of metastatic nodules (Figure 2E–2G) and the number of micrometastatic lesions (Figure 2F). While shCon cell injections resulted in an average of 55 metastatic nodules per lung, shGLS1 cell injections resulted in an average of 10 nodules per lung (Figure 2G). These results show that GLS1 levels are important in in vivo tumor metastasis as well as tumor growth. 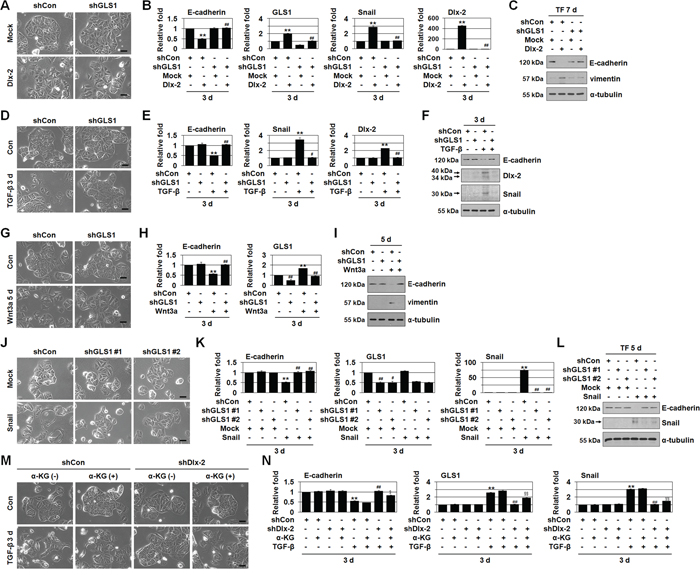 Although co-transfection of Dlx-2 and Snail did not affect Snail expression, shDlx-2 and Snail co-transfection significantly reduced Snail levels (Supplemental Figure 3A), indicating that Dlx-2 is required for the maintenance of Snail mRNA levels. Gln metabolism inhibition and shDlx-2 together may therefore affect Snail mRNA stability. We examined this possibility by treating Snail-transfected cells with actinomycin D in the presence or absence of Gln. As expected, Snail mRNA stability was significantly reduced by Gln deprivation compared to normal growth medium (Supplemental Figure 3B). Snail mRNA had a half-life (t1/2) of 9.99 h in complete medium and a t1/2 of 3.57 h in Gln-free medium; the absence of Gln accelerated Snail mRNA decay. Thus, in addition to inducing Snail gene transcription, Dlx-2 upregulates Snail levels by stimulating Gln metabolism, which increases Snail mRNA stability. 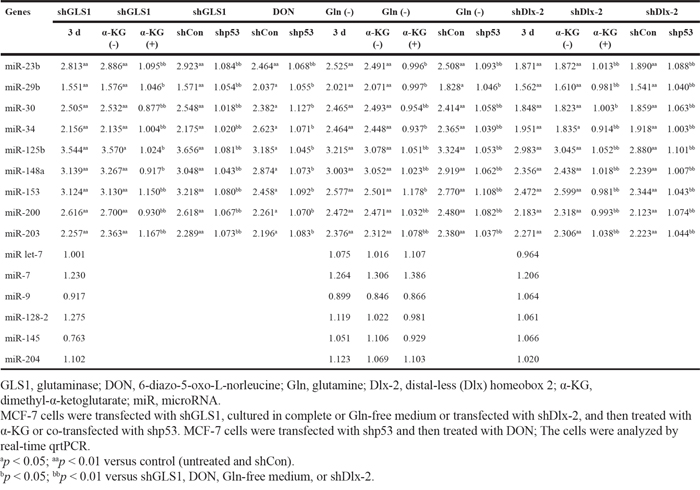 Tumor cells exhibit enhanced Glc and Gln uptake and are especially sensitive to nutritional stress. The tumor suppressor p53, which reprograms tumor cell functions in response to nutritional stress, is a major sensor of low nutrient levels [40]. Therefore, we investigated whether p53 is involved in the expression of Snail-targeting miRNAs. Gln metabolism inhibition (shGLS1, DON, or Gln deprivation) and shDlx-2 increased p53 expression (Figure 4A–4D), while α-KG suppressed shGLS1- and shDlx-2 induced p53 expression (Figure 4A and 4B). TGF-β decreases p53 by inhibiting its transcription and translation [41]. We found that shDlx-2 prevented the TGF-β-mediated decrease in p53 levels, but shSnail did not (Figure 4E and 4F). This indicates that TGF-β decreases p53 via Dlx-2. The shDlx-2-mediated increase in p53 levels was also prevented by TGF-β (Figure 4E and 4F). 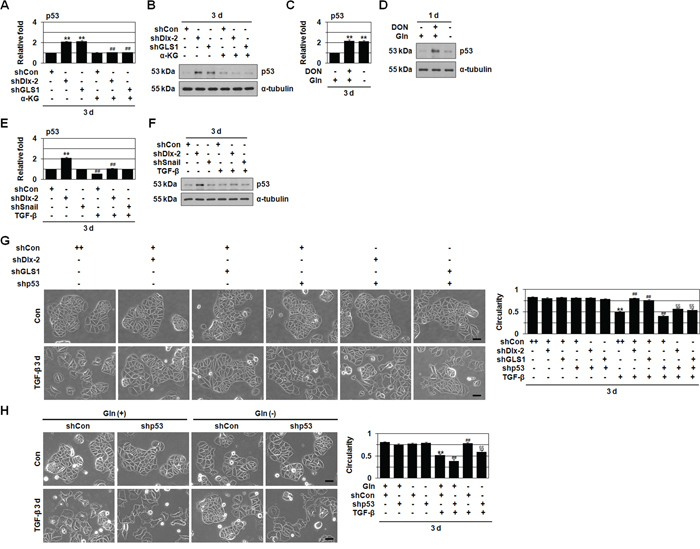 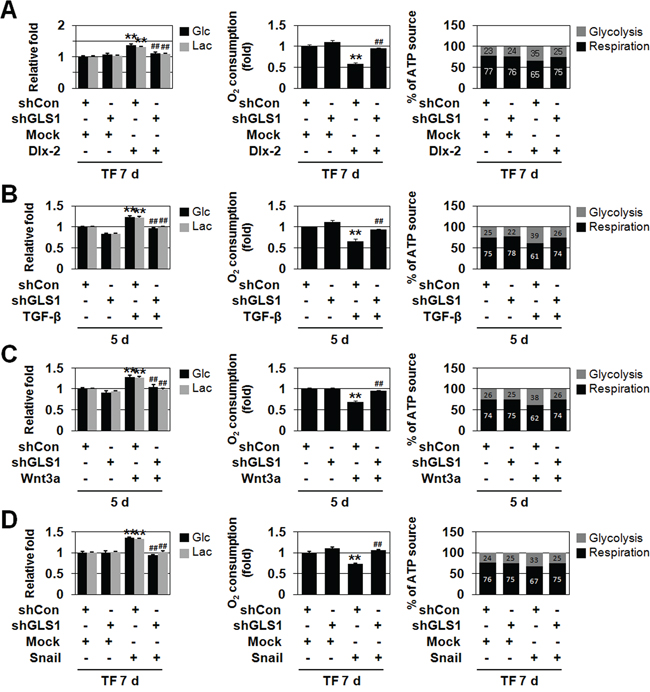 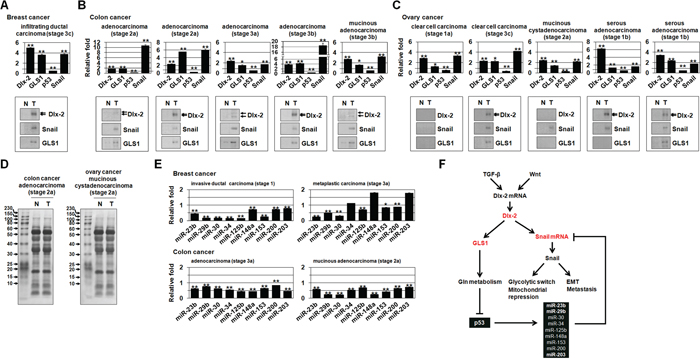 Dlx-2, a transcriptional factor involved in embryonic development, tissue homeostasis, and the cell cycle [31, 32], is important in carcinogenesis; Dlx-2 expression correlates positively with more advanced cancer stages and with poor prognosis in a variety of human cancer types [33–36]. In this study, we show that Dlx-2 induces EMT and regulates GLS1 expression and Gln metabolism, which increases tumor metastasis. The Dlx-2 target gene GLS1 (Figure 1) is important in Gln metabolism. GLS1 is a critical enzyme in a number of cancers [12–17]. GLS1 levels are increased in breast and prostate cancers and HCC tissues compared to matched normal tissues and positively correlate with both degree of malignancy and tumor grade [17, 18] (Figure 6). c-Myc-mediated repression of miR-23a/b increases GLS1 levels [12, 13]. In addition, the NF-κB member p65 subunit suppresses the expression of miR-23a and directly inhibits GLS1 expression [42]. Xiang et al. (2015) showed that GLS1 mRNA is upregulated in primary human HCC compared to surrounding non-tumor tissue, and that, while MYC mRNA levels were also elevated in the tumors, they did not correlate directly with GLS1 mRNA levels [17]. This suggests that factors other than MYC may be involved in the upregulation of GLS1 mRNA levels in HCC. Here, GLS1 was induced by Dlx-2 (Figure 1). We showed that GLS1 expression was also upregulated by TGF-β and Wnt in a Dlx-2-dependent, but Snail-independent, manner (Figure 1). Furthermore, Dlx-2 bound to the GLS1 promoter (Figure 1E), indicating that Dlx-2 induces GLS1 expression. Whether Dlx-2 binding is required for Dlx-2-induced GLS1 activation remains to be elucidated through the use of transcriptional reporter assays combined with site-directed mutagenesis.

We further showed that Dlx-2 levels were also reduced by Gln metabolism inhibition (shGLS1, Gln deprivation or DON) in Dlx-2-overexpressing cells and TGF-β-treated cells (Figure 3B, 3E and 3F, and Supplemental Figure 1B, 1E, 1J, 2B and 2H). We identified Snail-targeting miRNAs that might bind to the 3′-UTRs of Dlx-2 using miRanda, a target prediction program. Several miRNAs, including miR-23b and miR-203, were predicted to bind to the Dlx-2 3′-UTR (data not shown).

Oncogenic metabolism, including Gln metabolism, has been suggested to confer growth advantages to cancer cells by providing biosynthetic precursors [2, 4–8]. We propose that, in addition to its well-described role in supporting tumor growth by providing metabolites, Gln metabolism may also contribute to tumor EMT, metastasis, and progression. Metastasis is a complex process and includes detachment of tumor cells from the primary site. The loss of cell-matrix interactions induces anoikis, and resistance to anoikis is a prerequisite for tumor metastasis [60, 61]. Snail induces a glycolytic switch and suppresses mitochondrial oxidative metabolism [30], which may contribute to anoikis resistance and metastasis by preventing excess ROS generation. Thus, the Dlx-2/GLS1 cascade may promote tumor metastasis by increasing Snail-mediated anoikis resistance in addition to EMT. Our results suggest that GLS1 may be a potential therapeutic target for the prevention of metastasis and tumor progression.

Immunoblotting, real-time qrtPCR, IF and ChIP assay were performed as described previously [29, 33].