Hyaluronan (HA) accumulates in pancreatic ductal adenocarcinoma (PDAC), but functional significance of HA in the aggressive phenotype remains unknown. We used different models to investigate the effect of HA on PDAC cell motility by wound healing and transwell migration assay. Changes in cell motility were examined in 8 PDAC cell lines in response to inhibition of HA production by treatment with 4-methylumbelliferone (4-MU) and to promotion by treatment with 12-O-tetradecanoyl-phorbol-13-acetate (TPA) or by co-culture with tumor-derived stromal fibroblasts. We also investigated changes in cell motility by adding exogenous HA. Additionally, mRNA expressions of hyaluronan synthases and hyaluronidases were examined using real time RT-PCR. Inhibition of HA by 4-MU significantly decreased the migration, whereas promotion of HA by TPA or co-culture with tumor-derived fibroblasts significantly increased the migration of PDAC cells. The changes in HA production by these treatments tended to be associated with changes in HAS3 mRNA expression. Furthermore, addition of exogenous HA, especially low-molecular-weight HA, significantly increased the migration of PDAC cells. These findings suggest that HA stimulates PDAC cell migration and thus represents an ideal therapeutic target to prevent invasion and metastasis.

Pancreatic ductal adenocarcinoma (PDAC) is one of the most aggressive forms of malignant neoplasm, which is currently the 4th leading cause of cancer-related deaths in western countries [1]. Several aspects contribute to this poor survival. The most prominent biological and pathological feature that characterizes pancreatic cancer progression is its early invasion to surrounding structures and metastasis to distant organs so that it often presents clinically at a late stage in the course of the disease and many patients lost the opportunity for curative surgical resection. Currently, there are no laboratory markers available to detect early stage PDAC. Painless jaundice, often the presenting symptom, tends to occur very late. Cancers of the tail of the pancreas do not involve the bile duct system, and are often even more progressed at the time of diagnosis. Additionally the complex tumor microenvironment and activated multiple aberrant signaling pathways always lead to chemoresistance of patients with PDAC [2]. Therefore, it is important to understand the molecular basis that leads to invasion, dissemination, and metastasis of PDAC in order to provide more effective therapy.

Hyaluronan (HA) is a major component of extracellular matrix (ECM). In normal physiological conditions, HA is involved in a variety of cellular processes, including cell adhesion, migration, and proliferation by interacting with specific cell surface receptors including cluster of differentiation 44 (CD44) and receptor for hyaluronic acid-mediated motility (CD168/RHAMM) [3]. HA is synthesized by HA synthases (HAS1, HAS2, and HAS3) and is degraded by hyaluronidases (mainly HYAL1, HYAL2, and HYAL3) [4, 5]. Accumulating evidence suggests that HA is involved in the aggressive phenotype of various malignant tumors [6–8]. For example, HA has been shown to promote tumor progression by enhancing cell proliferation, migration, invasion, metastasis, angiogenesis, and resistance to chemotherapeutic agents [9, 10]. Interestingly, low-molecular-weight HA (LMW-HA), rather than high-molecular-weight HA (HMW-HA), has been shown to be specifically accumulated in cancer tissues and involved in tumor progression [11–13].

Previous studies have shown increased expression of HA in pancreatic cancer [14–16]. In our previous study, we demonstrated overexpression and prognostic relevance of HA and its regulators in PDAC [17]. Recently, forced production and accumulation of extracellular HA by hyaluronan synthase (HAS) 3 overexpression have been shown to promote growth of PDAC tumor in mice [18]. These findings suggest the importance of HA in the progression of PDAC; however, only a few studies addressed its effects on the aggressive tumor phenotype, especially cell migration, in PDAC.

In the present study, we utilized different experimental models to elucidate the effect of HA on the migratory ability of PDAC cells. To modulate the endogenous HA production, we treated PDAC cells with 4-methylumbelliferone (4-MU) which is a potent inhibitor of HA synthesis [19, 20] and 12-O-tetradecanoyl-phorbol-13-acetate (TPA), a stimulator of HA synthesis through activating protein kinase C [21, 22]. We also used another model of HA induction by co-culturing PDAC cells with tumor-derived stromal fibroblasts [23]. Finally, we investigated changes in cell motility by directly adding exogenous HA to PDAC cells. 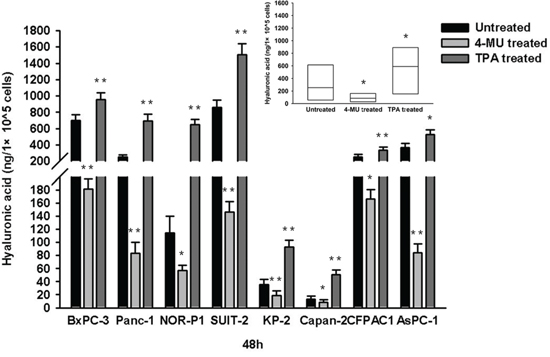 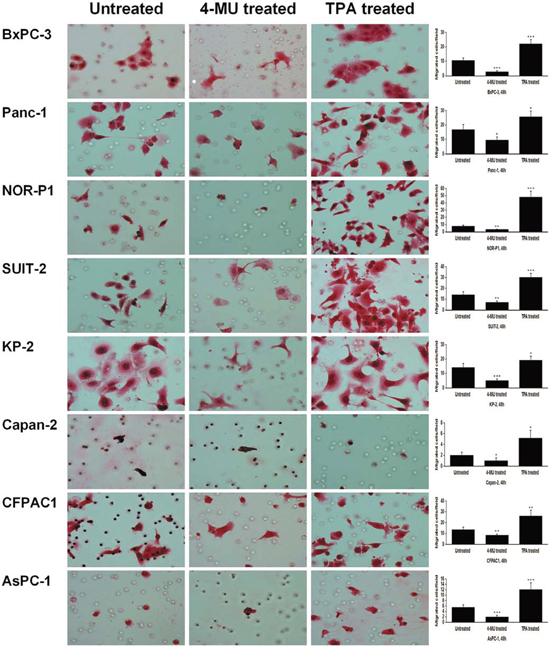 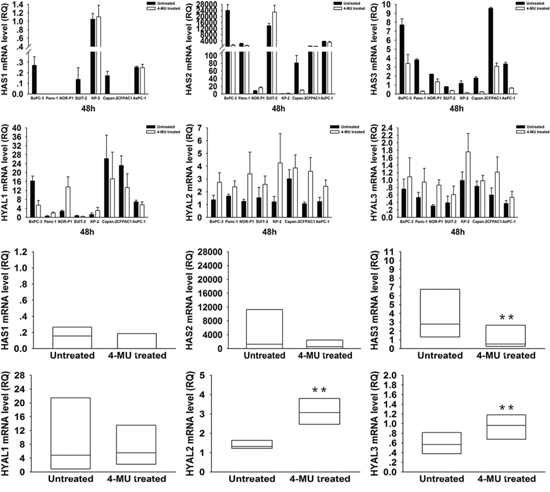 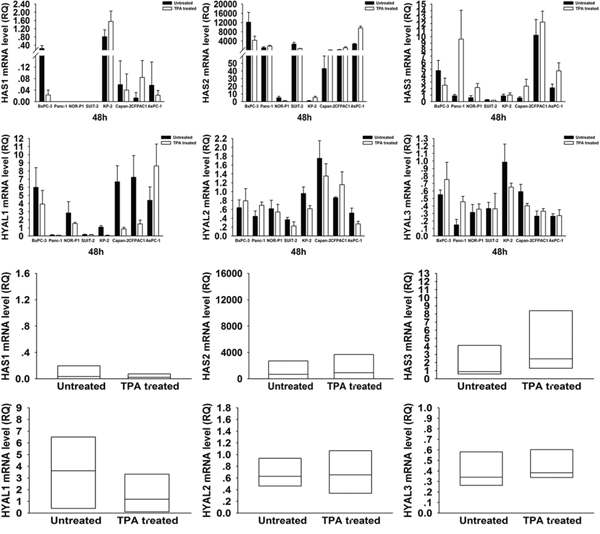 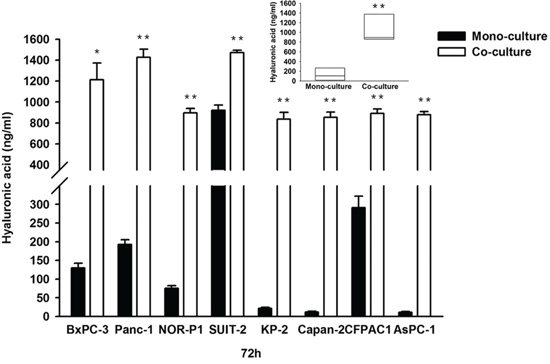 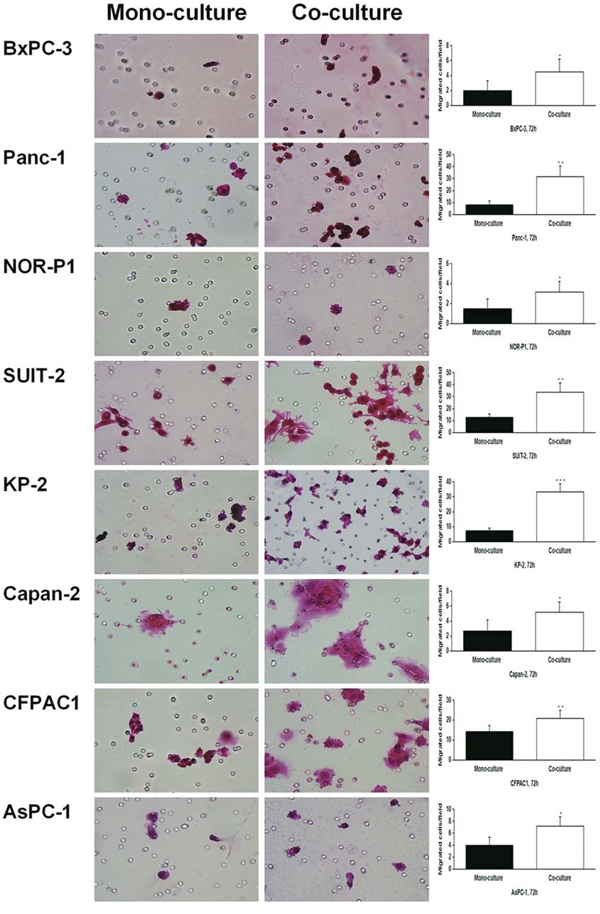 To gain more direct evidence for the effects of HA on the migration, we added exogenous HMW-HA (400~600 kDa) and LMW-HA (25~75 kDa) to PDAC cells. In wound healing assay, the number of migrating cells was significantly increased by HMW-HA (200 μg/ml) in three cell lines (BxPC-3, KP-2, and AsPC-1) and, more robustly, by LMW-HA (200 μg/ml) in all the cell lines (Supplementary Figure S3). Similarly, transwell migration assay revealed that the migrating cells were significantly increased by HMW-HA in four cell lines (BxPC-3, SUIT-2, KP-2, and AsPC-1) and by LMW-HA in all the cell lines (Figure 7). 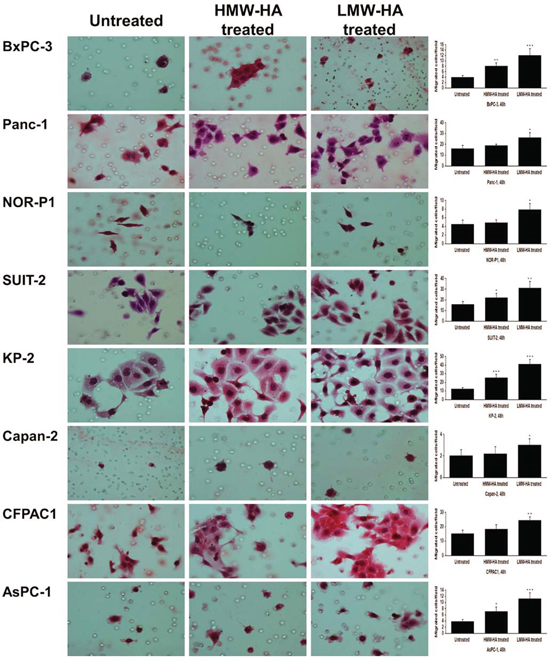 HA presents in a variety of molecular sizes, ranging from a few kDa to 10, 000 kDa. In the present study, we found that LMW-HA promotes PDAC cell migration more potently than HMW-HA. HA has different biological functions according to its molecular sizes. For example, excessive HMW-HA inhibits tumor growth [24, 25], whereas LMW-HA induces angiogenesis [26] and enhances motility of tumor cells [27]. Recent studies have also highlighted the importance of LMW-HA, rather than HMW-HA, in invasion and metastasis of cancers. Elevated serum levels of LMW-HA (smaller than 50kDa), but not total HA, correlated with metastasis in patients with breast cancer and decreasing the LMW-HA levels inhibited the migration and invasion of breast cancer cells [11]. Furthermore, in human colorectal cancer tissues, accumulation of LMW-HA (ranging from 6 to 25 disaccharides) in tumor interstitial fluid correlated with lymphatic invasion and lymph node metastasis [12]. These and our present findings suggest that LMW-HA, rather than HMW-HA, contributes to tumor progression by increasing cancer cell motility.

Tumor-stromal interactions can stimulate cancer progression. This is particularly true in PDAC which is characterized by a dense stroma called desmoplasia [28, 29]. In fact, the importance of tumor-stromal interactions in the aggressive behavior of pancreatic cancer is supported by several experimental evidences [30]. Among the molecules involved in the tumor-stromal interactions, HA is increasingly produced in co-culture between tumor cells and fibroblasts [23]. Interestingly, a previous study demonstrated that HAS2 mRNA expression is significantly increased in PDAC cells in response to co-culture with tumor-derived stromal fibroblasts [31]. In the present study, co-culture between PDAC cells and tumor-derived fibroblasts synergistically increased HA production into the culture medium and enhanced PDAC cell migration. These findings suggest that increased HA production in this co-culture system might contribute, at least in part, to the increased migration of PDAC cells.

Our present results may have therapeutic implications. Because we found that treatment with 4-MU robustly attenuates the migratory ability of PDAC cells, inhibiting HA production could be an ideal therapeutic strategy to prevent invasion and/or metastasis of PDAC. In fact, inhibition of HA synthesis by treatment with 4-MU, or its derivative 4-methylesculetin, has demonstrated antitumor activity in a variety of cancers, including PDAC [32–37]. Of particular importance, 4-MU (or hymecromone) is a dietary supplement for improving liver health and can be administered orally without any toxicities [38]. A recent study showed that oral administration of 4-MU inhibits prostate cancer development, growth, and metastasis by abrogating HA signaling in treated transgenic adenocarcinoma of the prostate (TRAMP) mice [39]. Another strategy is the use of HA degrading enzyme for the treatment of HA-rich cancers. Polyethylene glycol-conjugated (pegylated) recombinant human hyaluronidase PH20 (PEGPH20) has been shown to deplete the stromal HA and substantially augment the effect of chemotherapy in PDAC animal models [40, 41]. The efficacy of PEGPH20, in combination with other drugs, is currently being tested for the treatment of advanced PDAC in clinical trials. Thus, clinical application of these HA-targeted drugs for the chemoprevention and treatment of PDAC is awaited.

In conclusion, we demonstrate that HA stimulates PDAC cell migration and thus represents a therapeutic target to prevent invasion and metastasis of this highly aggressive neoplasm.

The effects of 4-MU (1000 μM) and TPA (100 ng/ml) on cell viability were analyzed using trypan blue dye-exclusion (TBDE) assays as cytotoxic measurements. After 48h, the untreated and treated cells were harvested and stained with 4% trypan blue and then counted by the LUNA™ automated cell counter (Logos Biosystems, Annandale, VA, USA) according to the instructions of the manufacturer. Cytotoxicity was determined from the number of viable cells (no color) in treated samples as a percentage of the untreated control.

About 4 × 105 cells were cultured in six-well plates to form confluent monolayers and then maintained overnight in 2 ml complete medium. Then, the medium was replaced with serum-free RPMI-1640 for 12h.

For wound healing assay, the monolayer was wounded by scratching lines across the well with a standard 200 μl pipette tip. After floating cells were removed by gently washing with phosphate buffer saline (PBS), fresh medias containing 1% FBS without or with 4-MU (1000 μM), TPA (100 ng/ml), HWH-HA (200 μg/ml), or LWH-HA (200 μg/ml) were added to the wells and incubated for an additional 48h. Six representative extents of cell migration near the wound areas were photographed under light microscopy using a 5 × objective (Axio Vert 135 FL, Carl Zeiss, Germany) at the time of scratching and after 48h. The supernatant fractions of all the samples were aliquoted and stored at −80°C until assayed for the determination of HA secretion.

The concentration of HA in culture medium was quantified by ELISA-based HA assay kit (R & D Systems, Minneapolis, MN, USA) according to the manufacturer’s instructions.

Data were expressed as mean ± SD for illustration. All statistical analyses were performed with SPSS statistical software (version 21.0; SPSS, Inc., Chicago, IL, USA). Differences in HA concentration and migrating cell number between untreated and treated groups were compared using paired t test. Wilcoxon signed rank test was used to evaluate the differences in HAS1~3 and HYAL1~3 mRNA levels among untreated and treated groups. Statistical significance was accepted when P < 0.05. All P values were two-tailed; P values less than 0.05 were marked by one asterisk; P values less than 0.01 by two asterisks, and P values less than 0.001 by three asterisks. All experiments performed in this study were repeated three independent times.

The authors thank Kyushu University for providing the primary fibroblasts (ike-f3) derived from PDAC tissues. There is no funding support in this research.