Pancreatic cancer is one of the major malignancies and cause for mortality across the world with an estimated 227000 deaths per year worldwide [1]. Tumor metastasis is responsible for over 90% of cancer mortality [2, 3]. In fact, pancreatic ductal adenocarcinoma (PDAC) is the most common histological type that presents with a highly invasive and metastatic phenotype, and is often responsible for treatment failure and poor clinical prognosis. Insightful knowledge about regulatory mechanisms underlying pancreatic cancer metastasis is required to define novel diagnostic and/or prognostic markers.

Impairment of the Hippo signaling pathway has been indicated in tumor development and metastasis of different cancer types [4, 5]. The Hippo pathway is composed of a kinase cascade, inclusive of MST1/2 serine/threonine kinase (ortholog of Hpo in Drosophila melanogaster), WW45 scaffold protein (Sav), MOB (Mats) and large tumor suppressor (LATS) 1 and 2 kinases (Wts) [4]. The Drosophila LATS is now recognized as a major component of a tumor suppressor pathway known as the Hippo-LATS pathway [4, 6, 7]. In this pathway, LATS transmits signals from upstream tumor suppressor proteins (FAT, Merlin, Expanded, Salvador, RASSF, Hippo, and MATS) to inhibit tumor growth by phosphorylating and suppressing the oncoprotein and transcriptional coactivator Yorkie [4, 7]. The mammalian homologue of Yorkie is YAP (Yes-associated protein) and TAZ (transcriptional coactivator with PDZ-binding motif) [7]. In fact, a similar tumor suppressor role for LATS1/2 has now been established in mammalian cells [4]. LATS1/2 mediated phosphorylation of YAP or TAZ prevents YAP and TAZ translocation to the nucleus by causing β-TRCP-dependent proteasomal degradation [8]. This in turn inhibits transcription of downstream target genes that cumulatively would have promoted a pro-cancerous phenotype [9].

However, two separate studies showed that the Itch E3 ubiquitin ligase is a bona fide binding partner and negative regulator of LATS1 [10, 11] and was accompanied by YAP accumulation and translocation into the nucleus thus indeed phenocopying YAP activation [10, 11]. ITCH belongs to the NEDD4-like family of E3 ubiquitin ligases and contains 4 WW domains (that associate with PPxY containing targets, conferring substrate specificity), and a HECT-type ligase domain that renders the catalytic E3 activity [12]. Multiple substrates of ITCH has been identified, inclusive of LATS1 [11], p63 [13], p73 [14], ErbB4 [15], and c-Jun [16, 17]. In fact, a positive correlation between ITCH and tumor progression has been suggested in breast cancer [18], and chronic lymphocytic leukemia [19]. However, levels of ITCH expression, its correlation to LATS1 levels and function, and its regulation has not yet been established in the context of pancreatic cancer. 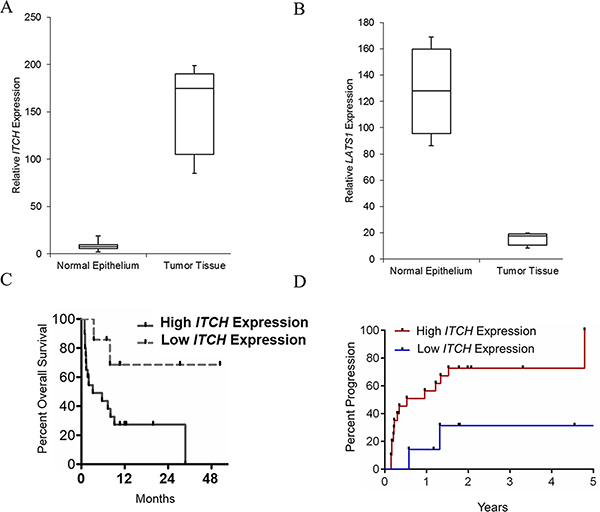 ITCH is essential for pancreatic cancer metastasis in vivo

Based on our in vitro findings, we hypothesized that inhibiting ITCH expression might impact tumor cell colonization and metastasis. We tested the hypothesis using an in vivo xenograft model utilizing tail vein injection. PANC-1 cells were chosen for the xenograft assay because of their high ITCH expression and metastatic potential, compared to the BxPC-3 cells that has low ITCH expression and are non-metastatic. If ITCH really has an effect on metastasis, its inhibition would inhibit or attenuate metastatic potential of the parental PANC-1 cells. We first generated PANC-1 cells stably expressing Firefly luciferase (FF+) to make them amenable to in vivo live imaging. FF+ PANC-1 cells were transduced with a shRNA targeting Renilla luciferase or 6 different shRNAs targeting ITCH. Successful knockdown was achieved using ITCH shRNA 2 and 6 as verified by immunoblotting (Figure 3A). 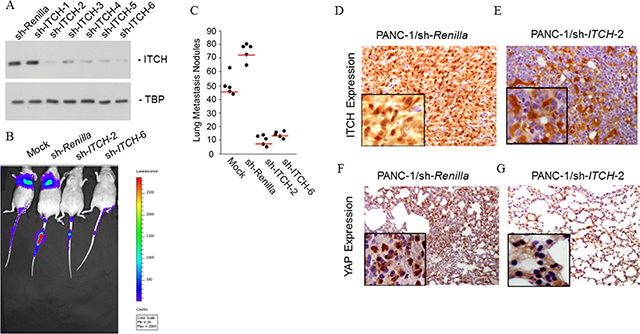 ITCH is a target of miR-106b in pancreatic cancer

We next wanted to determine what dictates ITCH overexpression in pancreatic cancer tissues. It has been previously indicated [19] that ITCH mRNA may be targeted by hsa-miR-106b (Figure 4A) in chronic lymphocytic leukemia patients. We hypothesized that if this is the case then miR-106b and ITCH expression should be inversely correlated. Steady state expression of hsa-miR-106b, a non-related microRNA (miRNA) hsa-miR-130, and endogenous control (RNU6B) were determined in BxPC-3 and PANC-1 cells. Data was normalized and expressed relative to RNU6B. Whereas there was no detectable difference in hsa-miR-130 expression between the two cell lines, hsa-miR-106b was expressed almost 30 folds higher in BxPC-3 compared to the PANC-1 cell line (P < 0.001) (Figure 4B). 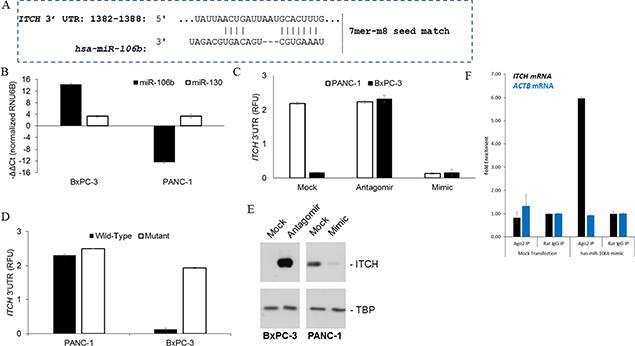 Given that our experiments indicated a role of ITCH in in vivo tumorigenesis and metastatic progression and hsa-miR-106b mediated regulation of ITCH, we hypothesized that suppression of hsa-miR-106b expression might be an underlying feature of human pancreatic cancer. To explore the expression of miR-106b and ITCH in human pancreatic cancer, we determined miR-106b expression in 20 pancreatic cancer patients, 10 with high ITCH and 10 with low ITCH expression. Our results indicated an inverse correlation between down-regulation in the levels of hsa-miR-106b and the observed increase in the levels of ITCH (Figure 5A) (P < .005, Pearson correlation r = −0.813).

Pancreatic cancer is a heterogeneous disease that widely differ in their pathological characteristics and clinical behavior. Despite treatment advances, almost 60–80% of patients with pancreatic cancer are metastatic at diagnosis [21]. The risk of recurrence is affected by stage at initial presentation and the underlying biology of the tumor. Thus it is imperative to have prognostic and diagnostic markers of human pancreatic cancer that would aid initial detection and also in clinical decision making about treatment modality.

MicroRNAs (miRNAs) are a new class of evolutionarily conserved small RNAs that regulate gene expression at a posttranscriptional level by blocking translation or degrading target messenger RNAs (mRNAs). Growing evidence indicates that microRNAs (miRNAs), a type of endogenous, small noncoding RNAs, participate in diverse cellular processes. Through specifically binding and cleaving mRNAs or inhibiting their translation [22], miRNAs function as either oncogenes or tumor suppressors [23]. Previous studies have indicated that miRNAs are key players in gene regulatory processes and can influence both normal and transformed cellular functionality [21–24]. In fact, miRNAs are reportedly associated with metastatic cancer progression [21, 24]. However, little information regarding the underlying mechanism of miRNAs in pancreatic cancer pathogenesis is available [21]. In that perspective our current finding of miR-160b functioning as a metastatic suppressor by inhibiting ITCH protein expression and regulating Hippo signaling is of paramount significance in advancing the knowledge base (Figure 5B).

Our findings also give certain clues with respect to miRNAs-targeted cancer treatment. Previous studies revealed that some specific miRNAs were often overexpressed in tumors, while most miRNAs were down regulated [25, 26]. Global miRNA suppression was found to boost carcinogenesis in both in vitro and in vivo models [27], highlighting the pro tumorigenic effects following miRNA loss-of-function. Liang et al. observed a sensitizing role of miRNA-302 replacement therapy in breast cancer cells to ionizing radiation [28]. Another recent study reported that viral delivery of let-7 miRNA could inhibit tumor growth in a mouse lung adenocarcinoma model [29]. Likewise, our results shows the inhibitory effect of hsa-miR-106b in pancreatic cancer cells. Taken together, these studies suggest that overexpression of even a single miRNA in cancer cells might confer substantial therapeutic benefit.

Fresh-frozen and paraffin-embedded pancreatic cancer tissues and corresponding adjacent non-tumorous pancreatic tissue samples were obtained from 30 Chinese patients at Chengdu Military General Hospital between 2008 and 2010. All cases were included post review by pathologist and histological confirmation as pancreatic cancer and only where complete clinical pathology and follow-up data was available. None of the 30 included patients underwent pre-operative local or systemic treatment. The study protocol was approved by the Institutional Review Board of the Chengdu Military General Hospital, China. Freshly harvested samples were immersed in RNAlater (Life Technologies, Gaithersburg, MD, USA) before snap freezing within 30 minutes post-surgery. All tissue samples were stored in liquid nitrogen until further use.

BxPC-3 and PANC-1 cell lines were obtained from the Cell Bank of Shanghai Institute of Biochemistry & Cell Biology, Chinese Academy of Sciences (Shanghai, China) (in October 2013). Cell lines were characterized in the parent bank by the STR method (in July 2013) and fresh vials were used every six months post-resuscitation. All cell lines were routinely tested for mycoplasma contamination and verified to be Mycoplasma free (last control November 2014). BxPC-3 cells were grown in RPMI 1640 with 10% fetal bovine serum (FBS) (Sigma Aldrich, St. Louis., MO, USA). PANC-1 cells were grown as a monolayer cell culture in DMEM containing 4.5 mg/mL D-glucose and L-glutamine (Life Technologies, Gaithersburg, MD, USA) supplemented with 10% FBS. Cells were kept at 37°C under a humidified atmosphere of 5% carbon dioxide.

According to the manufacturer’s instructions, miRNA from tissues and cells was extracted using the mirVana miRNA isolation kit (Life Technologies, Gaithersburg, MD, USA), and the expression levels of miRNA-16ba and miR-130 were detected by TaqMan miRNA assays (Life Technologies, Gaithersburg, MD, USA), using U6 small nuclear RNA as an internal control.

The ITCH 3′UTR reporter was constructed by amplifying the endogenous ITCH 3′UTR from Hela cell genomic DNA using primers described earlier [19]. XhoI and ApaI sites were added to the 5′ and 3′ ends of the fragment during the preceding PCR reaction and cloned into the XhoI and ApaI site on the Rr-luc-6XCXCR4 (Addgene plasmid 11308) Renilla luciferase vector. To make the ITCH 3′UTR mutant construct, site-directed mutagenesis was used to delete 1382–1388 region, corresponding to the has-miR-106b binding site. A firefly luciferase vector was used as transfection and normalization control in all luciferase assays. Constructs were sequence verified to UCSC human genome reference version hg19.

BxPc-3 cells were mock transfected or transfected with biotinylated has-miR-106b mimic. Forty-eight hours post-transfection, cells were placed on ice, irradiated once with 150 mJ/cm2 at 254 nm using a UV Crosslinker (Spectroline, Westbury, NY) and lysed for 15 minutes on ice in lysis buffer. Five mg of of post-nuclear extracts were subjected to immunoprecipitation using 10 μg of Ago2 antibody (clone 11A9, EMD Millipore, Billerica, MA, USA) or 10 μg of rat IgG using Pierce Crosslink IP Kit (Thermo Scientific, Pittsburgh, PA). The rest of the immunoprecipitated complex was digested with 30 μg of proteinase K to release the ribonucleoprotein complex and a second round of immunoprecipitation was performed using anti-streptavidin antibody (EMD Millipore). RNA extraction and qRT-PCR was done as described above. Relative enrichment was calculated from the qRT-PCR data.

This work was supported by Medical Scientific Research Foundation of Sichuan Provincial Health Department (No. 110479) and Research Fund of Chengdu Military General Hospital (No. 2011YG-A12), granted to Zhu-lin Luo.