Tuberculosis (TB), one of the oldest infectious diseases associated with humans, is a chronic disease caused by infection with Mycobacterium tuberculosis [1, 2]. The incidence of TB has increased during the past 20 years for reasons such as insufficient prevention efforts, incorrectly prescribed medication, the emergence of drug-resistant strains of M. tuberculosis and the prevalence of human immunodeficiency virus (HIV) infection [3, 4]. In 2011, there were an estimated 8.7 million new cases of TB, and the disease was responsible for roughly 1.4 million deaths [5].

Human natural killer T (NKT) cells are a rare subset of T lymphocytes and are characterized by their restricted expression of an invariant Vα24-Jα18 T cell receptor (TCR) chain paired with the Vβ11 TCR chain. This pair of TCR chains recognizes glycolipid antigens, such as α-galactosylceramide (α-GalCer), presented by the major histocompatibility complex (MHC) class I-like molecule CD1d [6]. NKT cells can rapidly produce very large amounts of cytokines, including interferon-γ (IFNγ), interleukin-4 (IL-4), IL-10, IL-13, IL-17, IL-21 and tumour necrosis factor (TNF) following stimulation, and they are able to either promote or suppress cell-mediated immunity without the need for clonal expansion [7, 8]. Quantitative and qualitative defects in the NKT cell pool, NKT cells inappropriately reactive with self (or non-self) glycolipid antigens, and NKT-derived cytokines have been associated with occurrence of diseases.

IL-21 is predominantly produced by activated CD4+ T cells and natural killer (NK) T cells [9-11]. IL-21 exerts many biological actions. IL-21 can induce the activation, proliferation and differentiation of T cells, NK cells and NKT cells, and promotes proliferation and differentiation of the macrophage and granulocyte lineages [12]. IL-21 has potent anti-tumor activity by activating CD8+ T cells and NKT cells [13]. Several studies reported the role of IL-21 in the pathogenesis of systemic lupus erythematosus (SLE) and rheumatoid arthritis (RA) [14-17]. A report describing novel sequence variants in genes encoding IL-21 and the IL-21R indicates that polymorphisms within IL-21 and the IL-21 receptor are positively associated with type 1 diabetes in humans [18].

Emerging evidence has shown that murine and human NKT cells may mediate protection against M. tuberculosis [19-23]. For example, it was demonstrated in a recent study that α-GalCer administration, alone or in combination with classic chemotherapy, can improve the clinical outcomes of M. tuberculosis infection in mice [22]. It has also been shown that α-GalCer incorporation into bacillus Calmette-Guérin (BCG) vaccine enhances the host immune response by modulating T cell priming via murine NKT cell activation [23]. Although a numerical deficiency of NKT cells has been found in the patients with pulmonary TB [24-26], much less is known about the frequency of human NKT cells and their functions in patients with M. tuberculosis infection. It has been recently reported that NKT cells produce very high levels of IL-21 following BCG immunization in mice and humans [27]. Children with active TB, compared with healthy controls, showed markedly diminished production of type 1 (IFN-γ and TNF-α), 2 (IL-4 and IL-13), and 17 (IL-17A, IL-21, and IL-23)-associated cytokines [28, 29].

In this study, we demonstrate for the first time that NKT cells isolated from pleural fluid mononuclear cells (PFMCs) from TB patients produce IL-21 following stimulation with M. tuberculosis (Mtb)-specific antigens and that IL-21 is able to induce the production of IgG and IgA by B cells, which might influence the local immune response to M. tuberculosis in TB patients. 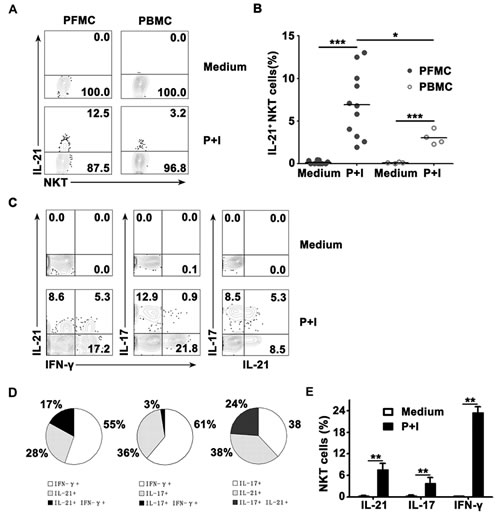 Figure 1: The frequency of IL-21- expressing TCRvβ11+ NKT cells in PFMCs and PBMCs, and the expression of IL-21 with IFN-γ and IL-17 in CD3+TCRvβ11+ NKT cells. Freshly isolated PFMCs and PBMCs were stimulated for 6 hrs with or without PMA plus Ionomycin and stained with anti-CD3 and anti-TCRvβ11 for the analysis of the expression of IL-21, IFN-γ and IL-17. A. Expression of IL-21 by NKT cells was detected by FACS. B. Statistical results of the frequency of IL-21+ NKT cells in PFMCs and PBMCs. C. Representative data are shown for the relationships between IL-21, IFN-γ and IL-17 expression. D. The percentages of IL-21, IL-17 and IFN-γ- expressing NKT cells. E. Statistical results for the frequency of cytokine-producing NKT cells following stimulation with PMA plus Ionomycin, as compared to unstimulated NKT cells. *, P,< 0.05; **, P < 0.01; ***, P < 0.001. 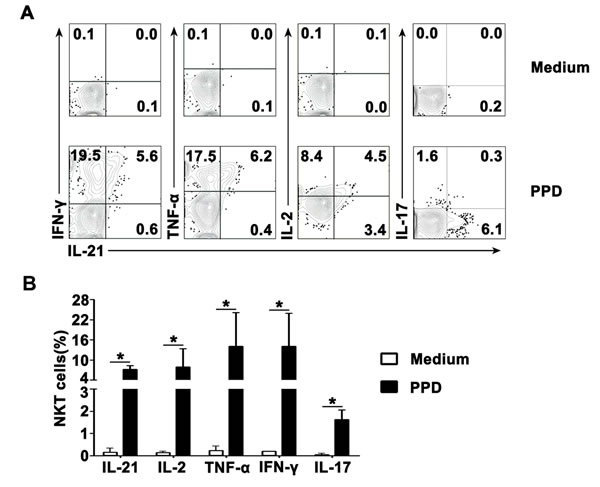 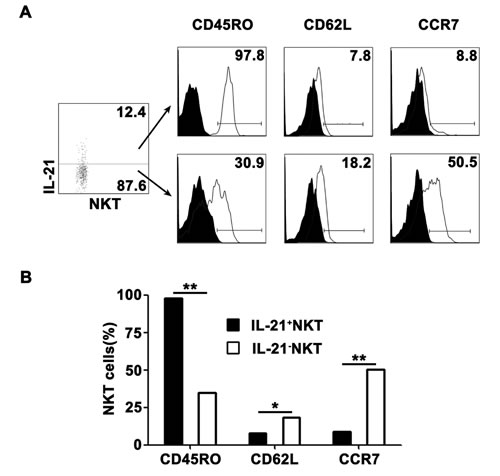 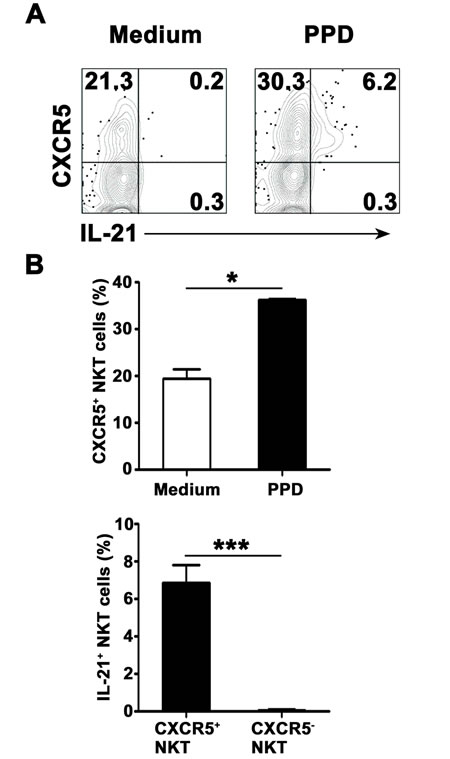 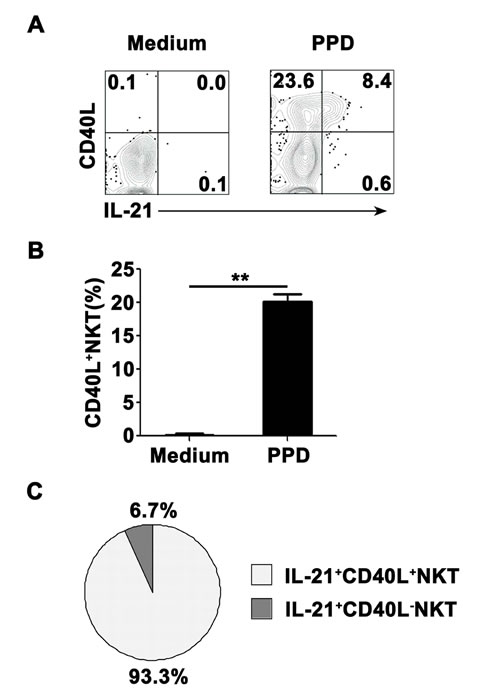 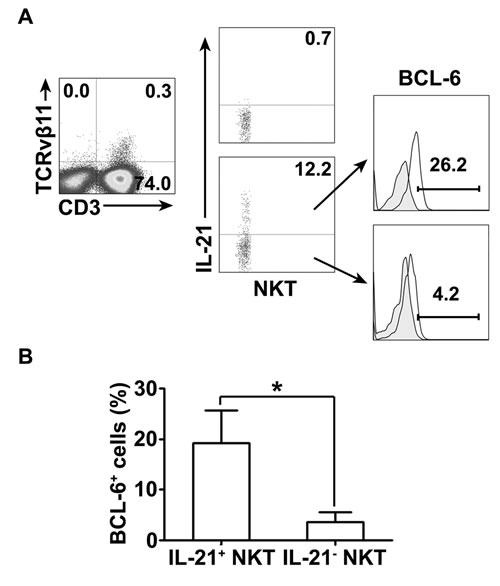 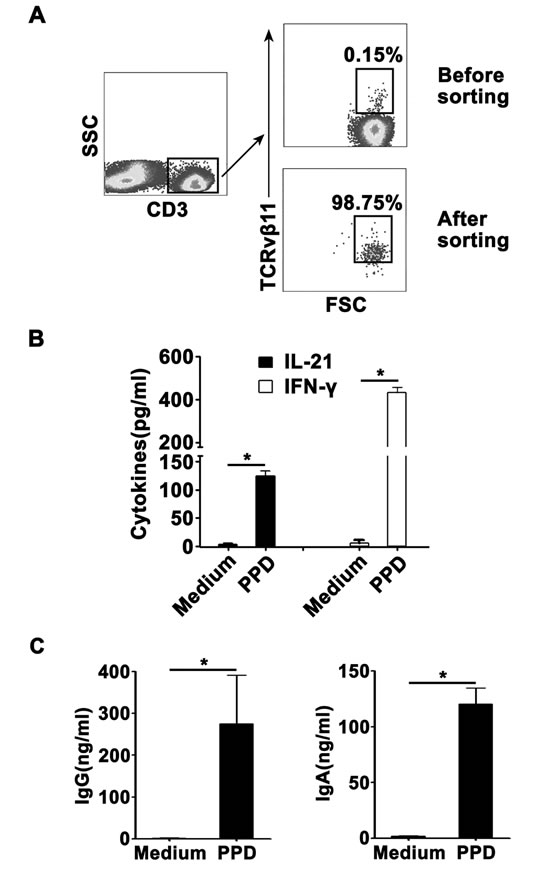 Natural killer T (NKT) cells are a small population of thymus-derived T cells that are found in mice and humans and are restricted by non-classical MHC-I molecule CD1d. The term NKT cell initially referred to any T cell that expresses cell surface antigens associated with the NK cell lineage, but the classification of NKT cells is problematic because it does not define a T cell lineage with unique phenotypical or functional attributes. Even among CD1d-restricted T cells, distinct lineages that can express NK cell antigens include type 1 NKT cells (also known as invariant NKT (iNKT) cells), which express the invariant Vα24-Jα18 TCR α-chain, and type 2 NKT cells, which have a more diverse TCR repertoire. NKT cells express a semi-invariant TCR which confers a specificity for glycolipid antigens that are mainly conserved between mice and humans. It is known that after stimulation, NKT cells can produce large amounts of cytokines that can alter the strength and character of immune responses through crosstalk with dendritic cells, neutrophils, lymphocytes and myeloid-derived suppressor cells, and by shifting cytokine responses to (or from) T helper 1 (TH1), TH2 or TH17 cell type profiles. Expression of various kinds of cytokines exerts NKT cell immunoregulatory potential.

NKT cells are different from functionally differentiated conventional T cells in that they are autoreactive and produce both Th1 and Th2 cytokines, including IL-4, IL-10, and IFN-γ, upon stimulation with their ligands. Pediatric TB was associated with elevated plasma transforming growth factor β (TGF-β), IL-21, and IL-23 levels, which suggested that these responses might play a crucial role in the pathogenesis of tuberculosis. It was demonstrated that mycobacterium-specific Th17 cells formed a T cell subset that was distinct from cells producing the Th1 cytokines. Previous reports from our lab illustrated that ESAT-6-, CFP-10- or BCG-specific Th22 and Th17 cells were distinct from each other and from Th1 cells [30]. Our results showed that NKT cells from PBMCs and PFMCs produced IL-21, IFN-γ and IL-17, and that NKT cells from PFMCs produced IFN-γ, TNF-α, IL-2 and IL-17 in response to PPD and TB antigens (data not shown). Therefore, we draw the conclusion that NKT cells played a role in the immune responses against M. tuberculosis infection through production of those cytokines.

It is known that Ag-cognate interactions occur between a particular subset of CD4+ Th cells, defined as T follicular helper (TFH) cells, and B cells and depend upon the engagement between CD40L (CD154) on TFH cells and CD40 on B cells and upon the local cytokine environment created by the activated TFH cells [33]. The expression of CXCR5 and production of IL-21 enable TFH cells to migrate to B cell follicles, engage with Ag-activated B cells, and support their proliferation and differentiation into germinal centers (GCs). Our results demonstrated that nearly all of IL-21-producing NKT cells expressed CD40L and CXCR5, which is partially consistent with previous reports and may enable interactions between NKT cells and B cells.

We hypothesize that NKT cells play a role in bridging the innate and adaptive immune responses via their production of IL-21. Although IL-21 can enhance NK cell function, it also increases the death of NK cells [34, 35], increases inhibitory NK receptor expression on both NK [35] and NKT cells (data not shown), and down-regulates costimulatory molecule expression on dendritic cells (DC) [36, 37]. Conversely, because IL-21 enhances Ag specific Ab production [38, 39], CTL responses [34, 40] and the generation of central and effector memory T cells [41, 42]. Thus, NKT cell-derived IL-21 is an important factor underlying the well-established ability of NKT cells to enhance Ag-specific Ab production and CTL responses [43-45]. Our findings demonstrated NKT cells from the pleural fluid of TB patients produced IL-21 after stimulation with PPD and IL-21 helped B cells to secrete IgG and IgA. These results suggest that, in addition to producing Th1 and Th2 cytokines, NKT cells also induce B cells to secrete Igs through an IL-21-dependent mechanism and can participate in local immune responses against M. tuberculosis infection.

In summary, we found that M. tuberculosis-specific antigens induced production of IL-21 in addition to IFN-γ, TNF-α, IL-2 and IL-17 by NKT cells in pleural fluids from TB patients. IL-21-expressing NKT cells expressed phenotypes of effector memory cells and co-expressed CXCR5 and CD40L. Furthermore, IL-21 produced by NKT cells promoted B cells to secrete IgG and IgA. Our data deepen information on local immune responses against M. tuberculosis infection and provide a further rationale for the evaluation of NKT cells in host defense against tuberculosis.

Twenty patients with tuberculous pleurisy (10 females and 10 males, 23-71 years old) were recruited from the Chest Hospital of Guangzhou, China. The diagnosis of pleural effusion from TB etiology was based on the following criteria: (i) M. tuberculosis on a pleural fluid smear (by Ziehl-Neelsen method); (ii) pleural fluid or pleural biopsy specimens growing M. tuberculosis on Lowenstein-Jensen medium; (iii) histological evidence of caseating granuloma on biopsy specimens of pleural tissue with positive staining for M. tuberculosis. Patients with HIV, HBV, HCV or a history of autoimmune diseases were excluded from the study. Twenty healthy volunteers (10 females and 10 males, 23-60 years old) were recruited from Sun Yat-sen University. Written informed consent was obtained from all patients and healthy donors. Ethics approval for the present study was obtained from the ethics committee of the Zhongshan School of Medicine, Sun Yat-sen University (Guangzhou, China) and the Chest Hospital of Guangzhou (Guangzhou, China).

Preparation of PFMCs and PBMCs

Isolation of monocytes and T cells

Purified T cells from PFMCs were stained with FITC-labelled anti-TCRvβ11 mAb, and non-T cells were stained with PE-labelled anti-CD19 mAb for 30 min at 4°C in the dark and washed twice with the buffer as described above. The cells were suspended in the buffer and sorted using a FACS Aria Ⅱ flow cytometer (Becton Dickinson, San Jose, CA) for TCRvβ11+ cells and B cells from PFMCs. The purity of TCRvβ11+ cells was > 98%, and of the B cells was > 99%.

The cells were washed twice with PBS buffer containing 0.1% BSA and 0.05% sodium azide. For surface staining, cells were incubated with the respective mAbs at 4°C in the dark for 30 min. Cells were washed twice and fixed in 0.5% paraformaldehyde before acquisition. For the detection of intracellular cytokines, cells were incubated with PPD or Mtb-HAg plus anti-CD28 mAb for 6-8 hrs in the presence of brefeldin A (10 μg/mL; Sigma-Aldrich, St Louis, MO). After stimulation, cells were washed twice with PBS and fixed in 4% paraformaldehyde, followed by permeabilization, and stained for the intracellular cytokines and molecules in PBS buffer containing 0.1% saponin. Lymphocytes were gated on forward- and side-scatter profiles. Flow cytometry was performed using a BD FACS Calibur (Becton Dickinson, San Jose, CA) and analyzed using FlowJo software (TreeStar, San Carlos, CA).

All statistical tests were performed with GraphPad Prism 5 (GraphPad Software Inc, San Diego, CA, USA). Differences between groups were assessed by the Kruskal-Wallis test with Dunn’s multiple comparison test. A value of P < 0.05 was considered significant.

This study was supported by National Basic Research Program of China Grant 2013CB531500 (973), Natural Science Foundation of China (81072403) and the introduction of innovative R&D team program of Guangdong Province (No. 2009010058). We would like to thank Dr. Maurice Gately in USA for the editing of the manuscript.