Colorectal cancer is one of the most common cancers in the western world and preoperative chemoradiotherapy (CRT) followed by total mesorectal excision is the standard of care for patients with locally advanced rectal cancer [1–5]. Park et al. revealed that treatment response to neoadjuvant chemoradiotherapy was an early surrogate marker and tumor response was associated with 5-year recurrence free survival [6]. Although it is well known that complete pathologic response to chemoradiation is associated with excellent prognosis, there are few studies evaluating the oncologic outcome of patients with ypT1-2N0 rectal cancer who underwent preoperative chemoradiation.

Actually, pathologic T1-2N0 rectal cancer shows an excellent prognosis without preoperative or postoperative chemoradiation. However, oncologic outcome of ypT1-2N0 remains unclear and undetermined. Thus, the aim of this study was to compare the cancer specific survival of ypT1-2 and pT1-2 rectal cancer patients after radical resection and identify risk factors of ypT1-2 rectal cancer.

Clinicopathological differences between the two groups 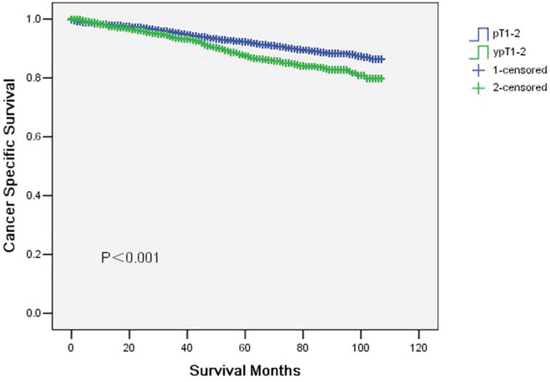 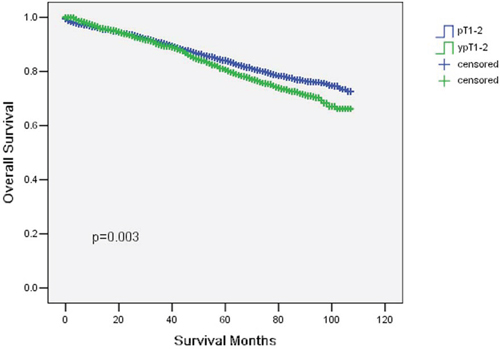 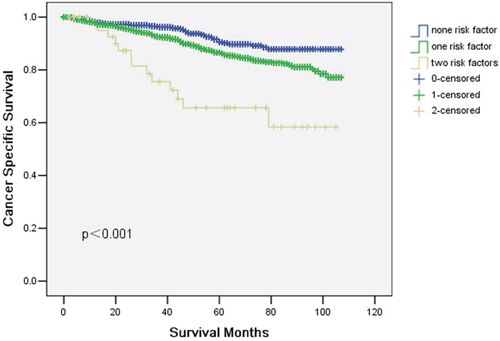 Two retrospective studies investigated the oncologic outcomes in patients with ypT1-2N0 rectal cancer who underwent CRT and radical surgery and compare with those who did not receive preoperative CRT [10–11]. They found similar results that no significant difference was observed in the 5-year local recurrence rate and overall survival for two groups. However, the number of patients in these two studies is too small to provide adequate power for drawing any definitive conclusions regarding oncologic outcomes.

In the present study, we identified 8,433 patients in pT1-2 and 2,240 patients in ypT1-2. The 5-year CSS was 92.2% in pT1-2 and 87.5% in ypT1-2 (P < 0.001). Thus, ypT1-2N0 rectal cancer after neoadjuvant chemoradiation has lower survival compared with pT1-2N0 rectal cancer. The standard treatment for T1-2N0 disease is surgery alone without preoperative or postoperative CRT. Actually, pathologic T1-2N0 rectal cancer shows an excellent prognosis without postoperative chemoradiation. In contrast, clinical practice guideline of adjuvant chemotherapy of ypT1-2 rectal cancer is not based on solid evidence and the level of scientific evidence for sufficient benefit is much lower than colon cancer [12–15].

The recently reported meta-analysis of 21 RCTs showed that a significant reduction in the risk of death (17%) and in the risk of disease recurrence (25%) among patients with rectal cancer undergoing adjuvant chemotherapy as compared to those undergoing observation [16]. However, only one of these 21 RCTs contained patients treated with preoperative chemoradiotherapy and almost all of these patients underwent curative resection of rectal cancer without preoperative treatment. However, things are more complicated in the era of the wide use of neoadjuvant chemoradiation for patients with locally advanced rectal cancer.

The European Organization for Research and Treatment of Cancer (EORTC) 22921 trial did not confirm a significant disease-free or overall survival benefit for adjuvant FU-based chemotherapy for locally advanced rectal cancer [17]. A second analysis of the EORTC 22921 trial was performed to find whether there is a subset of patients who, after preoperative radiotherapy or chemoradiotherapy and surgery, may benefit from adjuvant postoperative FU/leucovorin chemotherapy. Exploratory analyses suggest that only good-prognosis patients (ypT0–2) benefit from adjuvant chemotherapy [18].

However, two retrospective studies did not find patients with ypT1-2 benefit from postoperative adjuvant chemotherapy [19–20]. Fietkau et al. showed that 3-year disease free survival (DFS) for patients without lymph node metastases (ypN0) was excellent, independent of whether they had received postoperative chemotherapy (87.5 ± 6.0 percent) or not (87.7 ± 6.7 percent). In addition, SEER-Medicare-linked database showed that patients who had already received 5-FU-based neoadjuvant chemoradiotherapy, postoperative 5-FU-based chemotherapy did not prolong cancer-specific survival (CSS) in ypT1-2 (P = 0.960).

Thus, Up to date, no general agreement has been reached on the indications of adjuvant chemotherapy for ypT1-2 patients. In our study, we identified histological type and No. of LNs dissected as two significant risk factors for survival on univariate and multivariate analysis. Thus, ypT1-2 patients with one or two risk factors may benefit from postoperative adjuvant chemotherapy.

Cases of rectal cancer (C20.9 Rectum, NOS) from 2004 to 2012 were extracted from the SEER database (SEER*Stat 8.2.1) according to the Site Recode classifications with limitation to radiation prior to surgery and radiation preoperatively and post-surgery. Histological type were limited to adenocarcinoma (ICD-03, 8140/3, 8210/3, 8261/3, 8263/3), mucinous adenocarcinoma (ICD-03, 8480/3), and signet ring cell carcinoma (ICD-03, 8490/3). We selected this range because American Joint Committee on Cancer (AJCC) TMN stage was available since 2004 and chemoradiation has become the standard treatment since the landmark German CAO/ARO/AIO-94 trial using preoperative chemoradiation which was published in 2004. Other exclusion criteria were as follows: more than one primary cancer but the rectal cancer wasn’t the first one, synchronous distance metastases, and patients with unknown TNM stage.

Gender, race, pathological grading, histological type, stage, No. of lymph nodes (LNs) dissected and cancer specific survival (CSS) were extracted from SEER database. CSS was calculated from the date of diagnosis to the date of cancer specific death. Deaths attributed to the rectal cancer were treated as events and deaths from other causes were treated as censored observations. The Kaplan-Meier method was used to estimate the CSS [7]. The association between each of the potential prognostic factors and the estimated CSS was tested with the log–rank test [8]. Multivariate analysis was performed using the Cox regression model [9]. The statistical test was two sided and P < 0.05 was considered statistically significant. PASW Statistics 13 (SPSS Inc., Chicago, USA) was used for the statistical analysis.