Histidine-rich glycoprotein function in hepatocellular carcinoma depends on its N-glycosylation status, and it regulates cell proliferation by inhibiting Erk1/2 phosphorylation

Hepatocellular carcinoma (HCC) is the third most common cause of cancer mortality. Significantly downregulated histidine-rich glycoprotein (HRG) during the dynamic stages (WB, WB7, and WB11) of neoplastic transformation of WB F344 hepatic oval-like cells was screened out by iTRAQ labeling followed by 2DLC-ESI-MS/MS analysis. HRG expression was significantly lower in HCC tissues. HRG overexpression in Huh7 and MHCC-97H hepatoma cell lines led to decreased cell proliferation, colony-forming ability, and tumor growth, and increased cell apoptosis. HRG could inhibit cell proliferation via the FGF-Erk1/2 signaling pathway by reducing Erk1/2 phosphorylation. On the other hand, the functional expression of HRG was also dependent on the glycosylation status at its N-terminal, especially at the glycosylation site Asn 125. The glycosylation of HRG may play a key competitive role in the interaction between HRG and heparin sulfate for binding bFGF and activating the FGF receptor. These findings provide novel insights into the molecular mechanism of HRG in HCC.

Hepatocellular carcinoma (HCC) is the main subtype among all primary liver cancers, accounting for 70–85% of the known liver cancers worldwide [1]. Nevertheless, the mechanism of the carcinogenesis of HCC remains unclear. The cellular origin of cancer has been hypothesized to be from stem cells due to maturation arrest [2]. Hepatic oval cells (HOCs) have been described as multipotent progenitor cells that can differentiate into both hepatocytes and biliary epithelial cells [3]. Many studies suggest that bipotential HOCs in the adult liver are more likely to become the target cells of carcinogens [4, 5]. Furthermore, HOCs are activated and proliferate in chronic inflammation and are involved in hepatocarcinogenesis [6]. Some HCCs might originate due to the differentiation arrest of oval cells [7]. Therefore, the WB-F344 cell line is deemed to be an in vitro model of HOCs, and it has been widely used in HCC development research [8, 9].

Histidine-rich glycoprotein (HRG) is a 75-kDa glycoprotein synthesized by liver parenchymal cells that circulate in plasma at relatively high concentrations (100–200 μg/ml) [10, 11]. The protein has two cystatin-like domains at the N-terminus: a histidine-rich region (HRR) and a C-terminal domain [11, 12]. HRG is known to bind a variety of ligands, including heme, divalent cations such as Zn2+, tropomyosin, plasminogen, plasmin, fibrinogen, thrombospondin, IgG, FcγR, C1q, heparin, and heparan sulfate (HS) [11]. HRG, as an adapter protein, is implicated in regulating many processes such as angiogenesis, coagulation, fibrinolysis, cell chemotaxis, immune response, apoptotic process, cell adhesion, cell migration, cell growth, and cell proliferation [13–17]. Interestingly, HRG has been found to be downregulated in endometrial carcinoma [18] and ovarian cancer [19]. Furthermore, HRG has also been found to be reduced in the serum of AFP-negative HBV-related hepatocellular carcinoma [20]. In this study, we showed that HRG was downregulated in the process of neoplastic transformation of HOCs (WB-F344 cells).

Glycosylation is one of the most prominent protein posttranslational modifications that can regulate protein function. There are 3 N-glycosylation sites identified on HRG protein, namely, Asn 63, Asn 125, and Asn 344 [21, 22]. Asn 63 and Asn 125 are at HRG N-terminal regions, which interact with heparin sulfate (HS) [11, 23, 24]. This interaction with HS plays a role in regulating cell proliferation [25]. However, it remains unknown whether the glycosylation of the HRG N-terminal domain can influence protein function.

In this study, by quantitative proteomic analysis, we identified and validated the differential expression of HRG in neoplastic transformation of WB-F344 cells. Overexpressed HRG inhibited HCC cell proliferation through the FGF-Erk1/2 pathway, and the glycosylated status of N-terminal domains of HRG was essential for its protein function. This finding implied that HRG might be a tumor suppressor, providing a new insight into the relation between HRG and HCC.

Validation of downregulated HRG in a transformed model and HCC tissues

HRG was chosen for further study. We identified 3 matched peptide sequences of HRG as indicated in Fig. 1A. The relative level of HRG was significantly and dynamically downregulated during the transformation processes (WB:WB7:WB11 = 1:0.751:0.586). First, we validated that HRG was downregulated in a transformation model by western blot analysis and quantitative real-time PCR (qPCR) (Fig. 1B and 1C), as well as in 31 paired human HCC tissues and tumor surrounding liver tissues by western blotting. The data showed that HRG was downregulated in 28/31 (90.32%) of the HCC tissue samples (Fig. 1D). Furthermore, we evaluated the HRG levels in additional 75 paired HCC tissues by immunohistochemical staining. The data also showed that HRG was significantly decreased in 70 of 75 (93.33%) HCC tissue samples compared with that of the corresponding adjacent healthy liver tissues (Fig. 1E). These data indicated that HRG was frequently downregulated in HCC samples.

To assess the role of HRG in HCC, we established HRG-transfected Huh7 and MHCC-97H cells by a lentiviral system with puromycin selection. After puromycin selection, HRG expression in Huh7 and MHCC-97H cells was measured by western blot analysis and immunofluorescence microscopy (Fig. 2A–2D). HRG overexpression inhibited the cell viability of Huh7 and MHCC-97H as compared to that of the empty vector control (Fig. 2E and 2F), and on the contrary, promoted cell apoptosis (Fig. 2G and 2H). We performed an anchorage-independent colony formation assay in soft agar to evaluate the effect of HRG on malignant behavior. The result showed that overexpressed HRG significantly inhibited the anchorage-independent growth of Huh7 and MHCC-97H cells in soft agar (Fig. 2I and 2J). We also examined the effect of HRG on tumorigenicity in vivo using an orthotopic liver tumor model in nude mice. Compared to the control group, HRG overexpression resulted in significant inhibition of tumor growth (Fig. 2K). 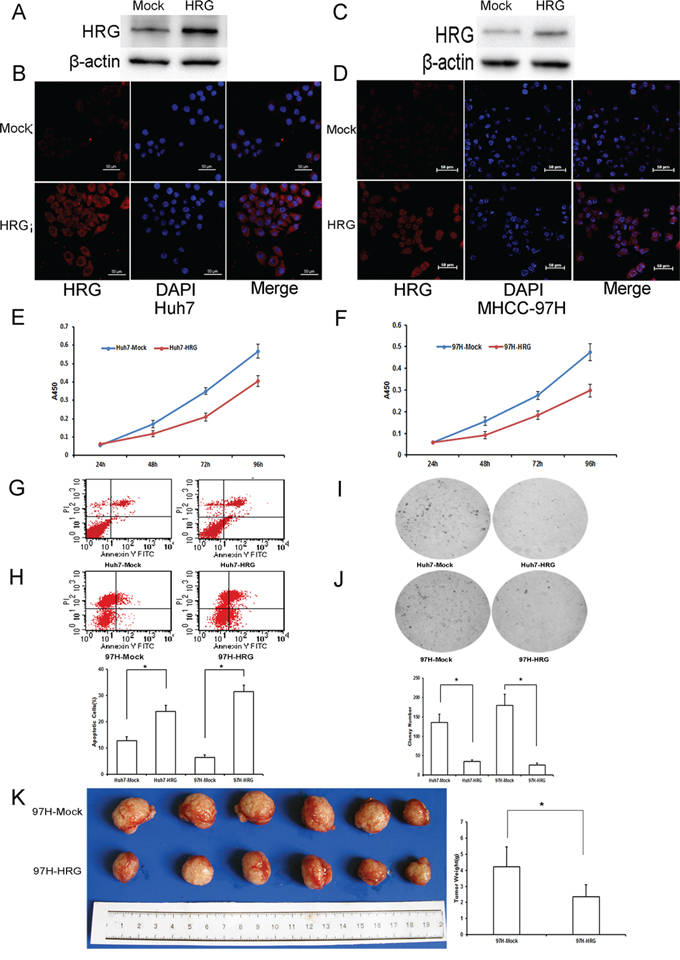 To determine the molecular mechanism of how HRG inhibits proliferation, we focused on the FGF-MAPK signaling pathway, which is known to play a major role in HCC cell proliferation [26]. Overexpressed HRG could reduce the phosphorylation of Erk1/2 but not of P38 and JNK (Fig. 3A and 3B). Meanwhile, Erk1/2 phosphorylation could be elevated by silencing HRG expression with siRNA (Fig. 3C and 3D). 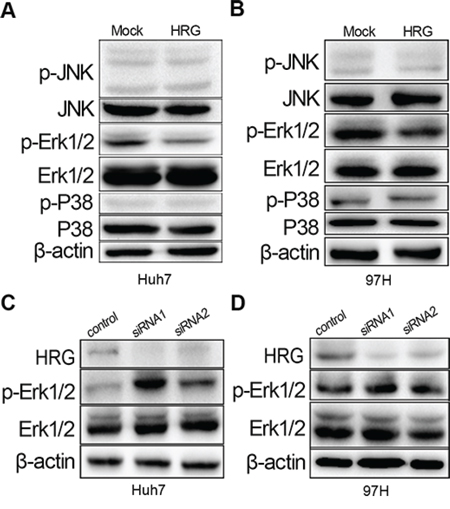 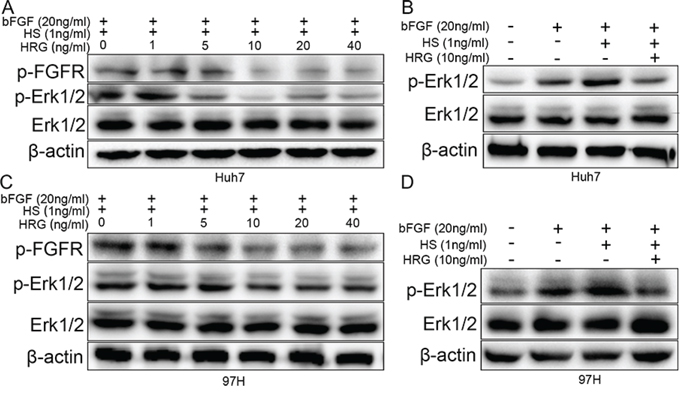 To illustrate the role of glycosylation of HRG in its protein function, we added prokaryotic-expressed recombinant HRG, bFGF, and HS to Huh7 and MHCC-97H cells. The HRG without glycosylation could not inhibit Erk1/2 phosphorylation (Fig. 5A and 5B). A series of previous research has shown that HRG N-terminal regions at Asn 63 and Asn 125 glycosylation sites interact with HS [11, 23, 24]. We mutated HRG Asn 63 to Gln63 (termed as HRGm1), Asn 125 to Gln125 (HRGm2), and both sites (HRGm1,2). HRGm1, HRGm2, or HRGm1,2 were then transfected into Huh7 and MHCC-97H cells by a lentivirus system. The result showed that overexpressing HRGm1 could still inhibit Erk1/2 phosphorylation as wild-type (WT) HRG, while partial inhibition by HRGm2 and no inhibition effect by HRGm1,2 (Fig. 5C and 5D). These data suggested that the glycosylation modification on Asn125 in the HRG N-terminal domain played an essential role in interacting with HS and then regulating FGF-Erk1/2 signaling. 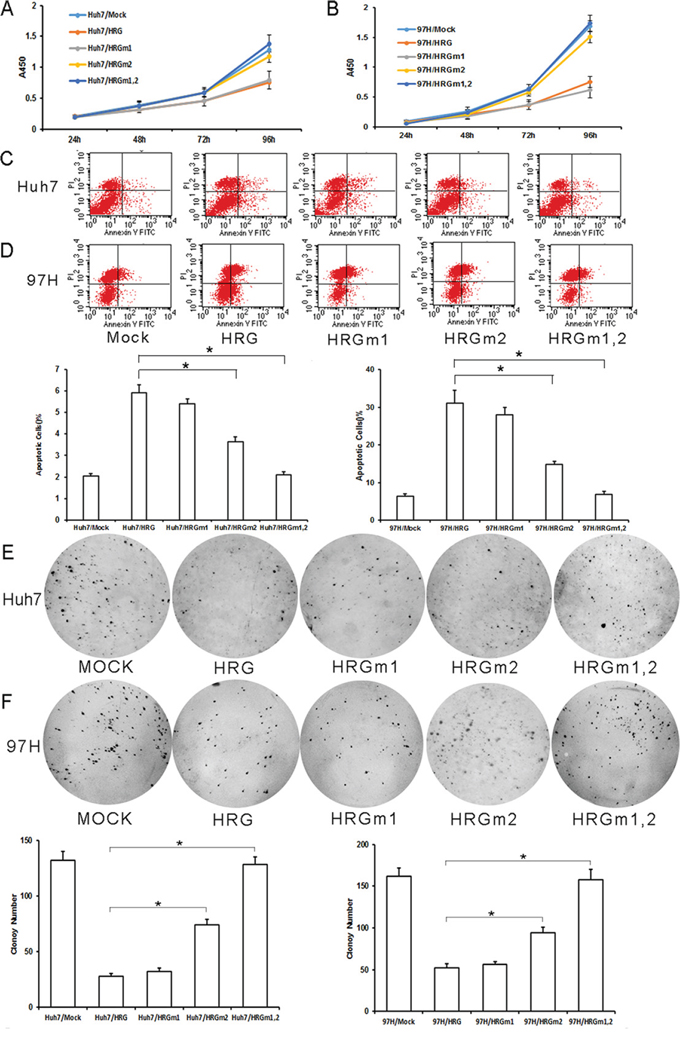 Proteomic profiling was compared between normal WB, pre-cancer status WB7, and early-cancer WB11. All the identified 87 differential expressed proteins were related to cell developmental disorder, organismal injury, immunological disease, hereditary disorder, or cancer. HRG is an abundant plasma protein with functional diversity. Many of these functions are involved in tumor progression and antitumor response. Recent research has found HRG to be at low levels in various types of cancers, such as endometrial carcinoma [18], ovarian cancer [19], and hepatocellular carcinoma [20]. HRG treatment can increase apoptosis and reduce proliferation in fibrosarcoma and suppress endothelial cell migration [28]. Elevated tumor-growing ability of fibrosarcoma and pancreatic carcinomas was observed in HRG-deficient mice than normal mice [29, 30]. In our research, HRG decreased continuously in the process of neoplastic transformation of HOCs, and this trend was validated in HCC tissues by western blot analysis and immunohistochemistry. We performed a series of experiments to evaluate the role of HRG in HCC. The results showed that HRG overexpression in Huh7 and MHCC-97H cells induced marked reductions in cell proliferation, colony formation, and tumor growth, and promoted cell apoptosis. These results suggested that HRG might be an antitumor factor in HCC cells.

HRG can bind multiple ligands such as tropomyosin, plasminogen, plasmin, fibrinogen, thrombospondin, IgG, FcγR, C1q, heparin, and HS [11], thereby modulating immunity, cell adhesion, angiogenesis, thrombosis, apoptotic process, cell adhesion, cell migration, cell growth, and cell proliferation [31]. HCC cell proliferation was mediated by the FGF-MAPK pathway [26, 32]. FGF protein domains include FGF receptor (FGFR)-binding domains and HS-binding domains, which contribute to receptor dimerization [26]. Almost all FGFs require HS as a cofactor to activate FGFR [33, 34]. We hypothesized that HRG might play a role in the FGF-MAPK pathway. Our experimental results were consistent with the hypothesis that HRG overexpression could suppress Erk1/2 activation and HRG silencing could promote Erk1/2 activation. Moreover, HRG competitively bound to the ligand HS rather than bFGF, leading to a decrease in Erk1/2 phosphorylation and FGFR phosphorylation. HRG has been shown to compete with both acidic and basic bFGF for binding to BALBk 3T3 cell-surface HS proteoglycans, and to significantly inhibit FGF-stimulated DNA synthesis [25]. This finding suggests an important role of HRG in inhibiting the FGF-Erk1/2 pathway in HCC cell proliferation.

In summary, HRG was found to be significantly decreased in HCC during neoplastic transformation of WB-F344 cells. We demonstrated that HRG was probably a negative regulator of HCC carcinogenesis, and HRG regulated cell proliferation via the Erk1/2 signaling pathway. Our data also indicated that glycosylation of HRG played a key role in the interaction between HRG and HS. These findings provided novel insights into the molecular mechanism of HRG in the regulation of HCC.

The method of transformation was based on a protocol described previously [9]. Briefly, cell populations were exposed to N-methyl-N′-nitro-N-nitrosoguanidine (MNNG; Tokyo Kasei Kogyo, Tokyo, Japan) during logarithmic growth for 24 h at a final concentration of 5 μg/ml culture medium. Following each exposure, treated populations were allowed to recover from MNNG-induced toxicity and to reach confluence, following which they were split as noted above. One dish was re-treated when it entered logarithmic growth, and the other dishes were used to generate populations for immediate phenotypic analysis and for freezing for future studies. Cells exposed to MNNG 7 or 11 times generated cells called WB7 (pre-cancer stage) and WB 11 (early cancer), respectively.

The methods for sample preparation, iTRAQ labeling, LC–MS/MS analysis, and immunohistochemical staining are provided in the supplementary materials and methods.

Three pairs of siRNAs against HRG were designed. Sequences of siRNA is listed in Supporting Table 1. More detail is provided in the supplementary materials and methods.

Puromycin (Sigma) was employed to select the transfected HCC cells. More detail is provided in the supplementary materials and methods.