Background: Several recent randomized clinical trials have preliminarily demonstrated that initial targeted therapy with combined BRAF and MEK inhibition is more effective in metastatic melanoma (MM) than single agent. To guide therapeutic decisions, we did a comprehensive network meta-analysis to identify evidence to robustly support whether combined BRAF and MEK inhibition is the best initial targeted therapeutic strategy for patients with MM.

Conclusions: This study indicates that concurrent inhibition of BRAF and MEK improved the most effective therapeutic modality as compared as single BRAF or MEK inhibition for patients with MM.

Metastatic melanoma (MM) used to be a fatal disease with an average survival of 7 months after diagnosis, since treatment options were limited. The discovery of driver oncogenic mutations of BRAF (eg.V600E, V600K) opens a new era in targeted therapy for MM. Indeed, the potent and specific BRAF (eg. dabrafenib, vemurafenib and sorafenib) inhibition, as compared with chemotherapy, have provided considerable clinical benefits including progression-free survival (PFS), overall survival (OS) and objective response rate (ORR) in patients with MM [1, 2]. However, most patients relapsed about 7 months after targeted therapy and approximately 14-26% of patients have development of secondary cutaneous squamous cell carcinoma and hyperkeratotic lesions within the first 2-3 months after BRAF inhibition [3]. Mechanism of acquired resistance commonly involves reactive MAPK pathway through mutant BRAF amplification and mutations activating RAS and MEK [4]. Therefore, downstream MAPK inhibition, such as MEK inhibition, was recognized as a promising target option. In fact, MEK inhibition (eg. trametinib) improved overall survival of MM patients with BRAF V600 mutation and not previously treated with BRAF inhibitors compared with chemotherapy [5]. In addition, the cutaneous adverse effects, such as cutaneous squamous cell carcinoma resulted by BRAF-inhibitor–induced paradoxical activation of the MAPK pathway in keratinocytes with upstream activation of signaling by preexisting RAS mutations [6, 7] , which can be blocked with the addition of a MEK inhibition. Thus, combinative targeting the MAPK pathway via BRAF and MEK seem to provide greater clinical efficacy and reduce the adverse effects compared with BRAF inhibition alone.

Concurrent targeting BRAF and MEK has been considered the possibility to enhance tumor growth inhibition, delay acquired resistance, and abrogate paradoxical activation of the MAPK pathway in preclinical models of melanoma [6]. Recently several randomized controlled trials are on the way to evaluate efficacy of combined BRAF and MEK inhibition, such as the BRAF inhibitor dabrafenib and the MEK inhibition trametinib, have demonstrated superior response rate and prolonged survival [8-11]. However, the optimum treatment remains controversial and the feedback is not encouraged in term of the modestly enhanced, therapeutic efficacy [12]. In other way, it is difficult to integrate information on the relative efficacy compared with other combination treatments such as BRAF-chemotherapy, MEK-chemotherapy, and MEK alone. To establish the optimum treatment for MM, we did a random-effects network meta-analysis to compare combined BRAF and MEK inhibition in term of PFS, OS and ORR, respectively.

We identified 451 relevant references for review title and abstract. After initial screening, we retrieved the full text of 32 potentially eligible clinical trials for detailed assessment. Of these, 22 randomized controlled trials were evaluated in more detail, and 18 randomized controlled trials with phase II or III were found that met the eligibility criteria for this study. Finally, 16 eligible trials reporting randomized controlled trials were included for meta-analysis, with a total of 5976 patients randomized to receive two of the six treatment strategies [1, 2, 5, 8-11, 13-21]. Figure 1 depicted the flow diagram of the systematic literature search and selection of random control trials. The characteristics of the 16 included trials were summarized in the Table 1. Six strategies were included: combined BRAF and MEK inhibition, combined BRAF inhibition and chemotherapy, combined MEK inhibition and chemotherapy, BRAF inhibition alone, MEK inhibition alone and chemotherapy alone. Figure 2 showed all the comparisons analyzed within the network. Across the 16 trials, BRAF mutant patients accounted for 64.45% (3851/5976).

Table 1: Characteristics of the eligible trials 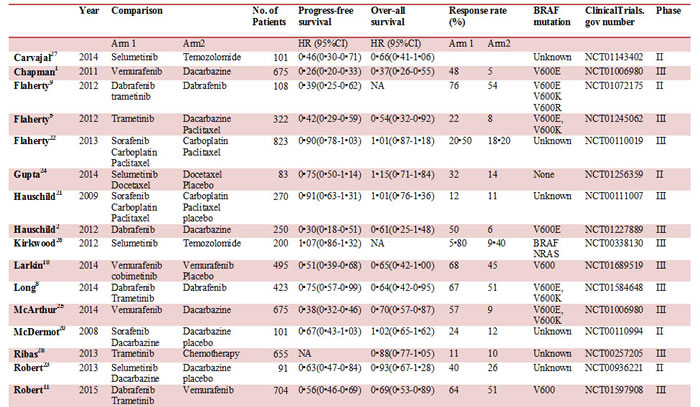 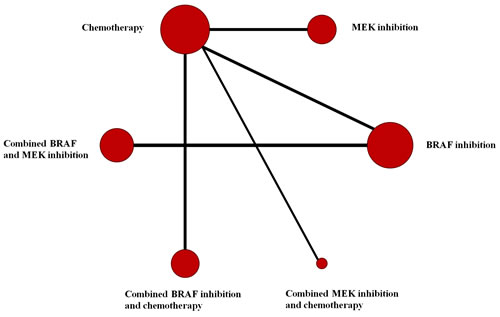 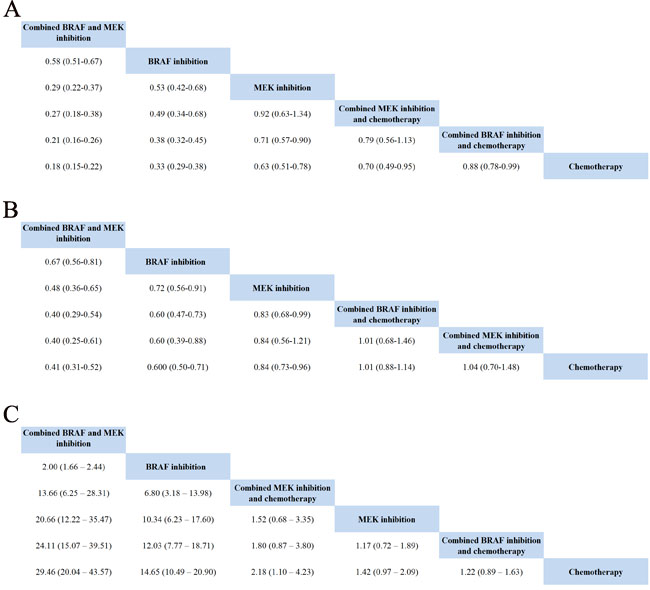 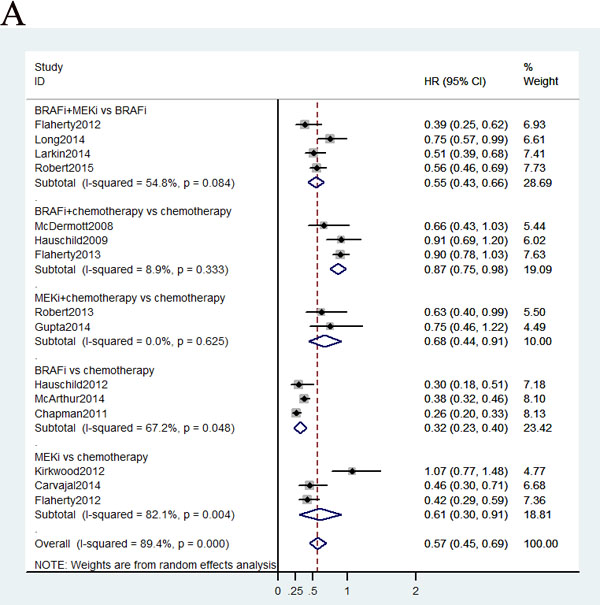 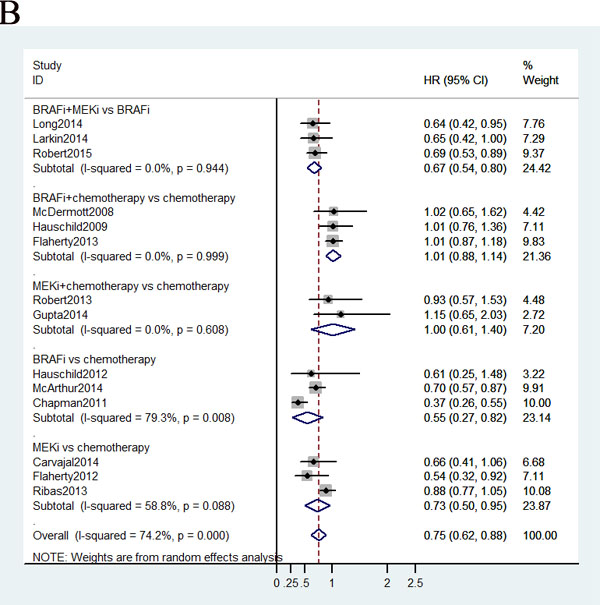 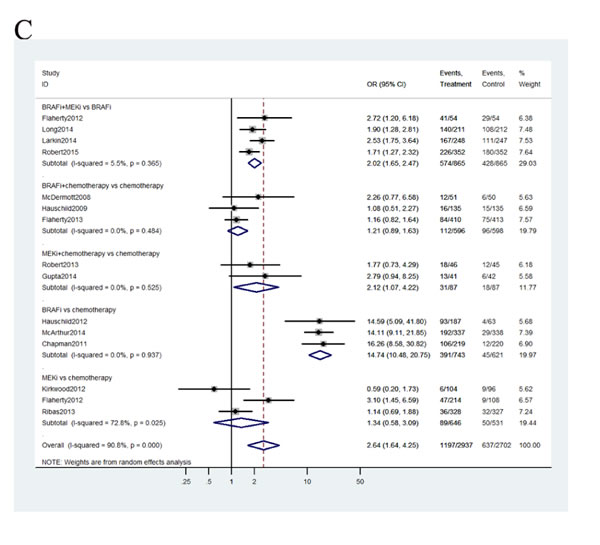 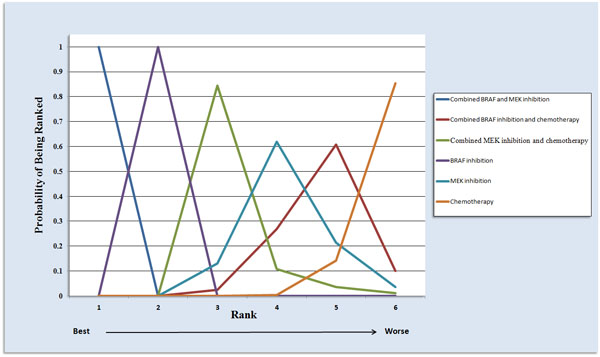 Figure 5: Ranking of treatments in terms of objective response rate by values of surface under the cumulative ranking probability curve.

This study provides insight into the concurrent inhibition of BRAF and MEK for MM; however, it does have some limitations. First, 5 trials with irrespective of the BRAF mutation were included in this present meta-analysis. However, BRAF mutation status has been hypothesized to predict disease recurrence and response to chemotherapy in melanoma patients [29]. Identification and stratification of constitutively activating BRAF mutations in MM has led to observe homogeneous efficacy for different therapeutic strategies. Second, combined dabrafenib and trametinib was the first combined BRAF and MEK inhibition tested in clinical trials [9]. In our analysis, the combined BRAF and MEK inhibition was mixed by dabrafenib-trametinib and vemurafenib-cobimetinib combination. In the future, the characteristics of each combination, and comparison between different combination should be evaluated to identify best combinative inhibition [30]. Furthermore, studies evaluating the combination of BRAF/MEK inhibition with other inhibition such as PI3K/mTOR should be considered. Finally, an important consideration is that this study only analyzes efficacy for combined BRAF and MEK inhibition, in future study toxic effects should be evaluated when comparing those targeted therapies, such as the incidence of pyrexia [31], panniculitis [32], gastrointestinal or ocular toxicity cutaneous adverse events [33].

We searched database of PubMed, the Cochrane Collaboration Central Register of Controlled Clinical Trials, Cochrane Systematic Reviews, and ClinicalTrials.gov for randomized controlled study without year and language restrictions, using the following search algorithm: combined targeted therapy AND melanoma. After the combinations of dabrafenib–trametinib or vemurafenib–cobimetinib have been identified, the keywords of individual inhibition of BRAF (dabrafenib, vemurafenib, sorafenib) and MEK (trametinib, cobimetinib, selumetinib), trial and melanoma were used to search relevant studies according to our previous MAPK therapy review [34].

First, the titles and abstracts of study reports have been identified by the search strategies for eligibility, and then full-text versions of all eligible studies were obtained for data synthesis. All randomized controlled trials that compared at least two arms of different treatment regimens involving targeted therapy were obtained. We required trials to include data for hazard ratio (HR) for PFS and OS, and conformed to the convention of reporting HR showing benefit of experimental drug versus control (HR < 1 favouring the experimental group and > 1 favouring the control group). The ORR defined as complete (CR) or partial response (PR) was according to Response Evaluation Criteria in Solid Tumors (RECIST).

Three investigators (Mai RQ, Zhou SX and Zhong WX) independently reviewed the full article of eligible trials and extracted information into an electronic database. From each eligible trial, the first author, year of publication, sample size, BRAF mutation, Clinical Trials.gov number, randomized phase and treatments of experimental and control group were recorded. Primary and secondary endpoints were also recorded. The primary end point was PFS. Secondary end points included OS and ORR, which were measured according to the Response Evaluation Criteria in Solid Tumors (RECIST) [35]. The reported HR was our preferred end point because HR account for censoring, provide time-to-event information [36]. When HR were not reported we estimated them from summary statistics with the method described by Tierney et al. [37]. We extracted the data for HR and corresponding 95% credibility intervals (CI) for PFS and OS analysis.

The traditional pair-wise meta-analysis has been performed by Stata 12 (StataCorp, College Station, TX, USA) for PFS, OS and ORR, respectively. For network meta-analysis, the model applied to analyze the HR of PFS and OS was a Bayesian consistency model as described in Woods et al. [24], with 240000 iterations to obtain the posterior distributions of model parameters and 40000 burn-ins. The LnHR and SE were generated according to the HR and corresponding CI value described by Tierney et al. [37]. HR below one indicated a benefit of the experimental intervention. We compared ORR with odds ratio (OR) with 95% CI using NetMetaXL, which provides an interface for conducting a Bayesian network meta-analysis using WinBUGS 1.4.3 (MRC Biostatistics Unit, Cambridge, UK) from within Microsoft Excel [38]. To assess whether there was inconsistency between direct and indirect comparisons, the pooled HR from the network meta-analysis have been compared with corresponding HR from traditional pair-wise random-effects meta-analysis of direct comparisons as previous described by Liao [36]. Each analysis was based on non-informative uniform with random-effect model accounting heterogeneity among studies. We estimated 95% CI from the 2.5th and 97.5th percentiles of the posterior distribution. The P value from the 95% confidence interval has been evaluated according to the method described by Altman DG [39]. We did sensitivity analyses by repeating the main computations using a fixed-effect method. The reporting of this meta-analysis is based on the Preferred Reporting Items for Systematic Reviews and Meta-Analyses (PRISMA) guidelines [40].

The authors acknowledge the assistance of Fan Mo (University of British Columbia) for assistance with the literature search.

This work was supported by grants from the National Natural Science Foundation of China (81402616).

12. Chapman PB, Solit DB and Rosen N. Combination of RAF and MEK inhibition for the treatment of BRAF-mutated melanoma: feedback is not encouraged. Cancer Cell. 2014; 26:603-604.