Peritoneal disseminated cancer is highly treatment resistant. We here report the efficacy of intraperitoneal (i.p.) administration of tumor-targeting Salmonella typhimurium A1-R in a nude mouse model of disseminated human ovarian cancer. The mouse model was established by intraperitoneal injection of the human ovarian cancer cell line SKOV3-GFP. Seven days after implantation, mice were treated with S. typhimurium A1-R via intravenous (i.v.) or i.p. administration at the same dose, 5×107 CFU, once per week. Both i.v. and i.p. treatments effected prolonged survival compared with the untreated control group (P=0.025 and P<0.001, respectively). However, i.p. treatment was less toxic than i.v. treatment. Tumor-specific targeting of S. typhimurium A1-R was confirmed with bacterial culture from tumors and various organs and tumor or organ colony formation after i.v. or i.p. injection. Selective tumor targeting was most effective with i.p. administration. The results of the present study show S. typhimurium A1-R has promising clinical potential for disseminated ovarian cancer, especially via i.p. administration.

Ovarian cancer is a leading cause of cancer-related death among women in the U.S. with 22,000 being diagnosed and 14,000 deaths each year [1]. If the cancer has distantly spread from the ovary, the 5-year survival rate is 27% [2, 3] since platinum-based chemotherapy, which is first-line, for ovarian cancer with peritoneal dissemination [4], has low efficacy.

For more than 200 years cancers have been observed to regress following acute bacterial infections, mostly streptococcal [5]. In the late 19th and early 20th centuries. Coley infected cancer patients with Streptococcus pyrogenes and later treated the patients with extracts of the bacteria, which became known as Coley’s toxins. Coley often had very good results with both the bacteria and the toxins [6].

Recently, there has been intense interest to develop bacterial therapy of cancer [6, 7]. The barriers in tumors for standard therapy such as hypoxia, acidic pH, disorganized vascular architecture, are beneficial for bacteria to target cancer [7].

One approach to bacterial therapy of cancer is to use anaerobic bacteria such as Bifidobacterium [8] and Clostridium [9] which replicate in necrotic areas of tumors. Anaerobic bacteria cannot grow in oxic viable tumor tissue, which restricts their efficacy. In addition, obligate anaerobic bacteria may be limited to intratumor (i.t.) injection which would preclude their use for metastatic cancer.

Recently a human patient with metastatic leiomyosarcoma was treated by i.t. injection of Clostridium novyi (C. novyi)-NT spores which reduced the tumor within and surrounding the bone [10].

Salmonella typhimurium, which is a facultative anaerobe, was previously attenuated with purine and other auxotrophic mutations, as well as lipid A-modified (msbB), and termed VNP20009 [11], VNP20009 was tested in a Phase I clinical trial on patients with metastatic melanoma and renal cell carcinoma [12].

Another strain of S. typhimurium, A1-R, has been developed by our laboratory and has increased antitumor efficacy compared to VNP20009 [13]. S. typhimurium A1-R is auxotrophic for Leu-Arg which prevents it from mounting a continuous infection in normal tissues. A1-R has no other attenuating mutations as does VNP20009 and, therefore, has higher tumor virulence. A1-R was able to eradicate primary and metastatic tumors in monotherapy in nude mouse models of prostate, breast, lung and pancreatic cancer, as well as sarcoma and glioma [14-22]. Tumors with a high degree of vascularity were more sensitive to A1-R, and vascular destruction appears to play a role in A1-R antitumor efficacy [23, 24].

In a recent study, we demonstrate that A1-R inhibits tumor growth, dissemination, and metastasis and extends survival in mouse models of aggressive human ovarian cancer [27]. 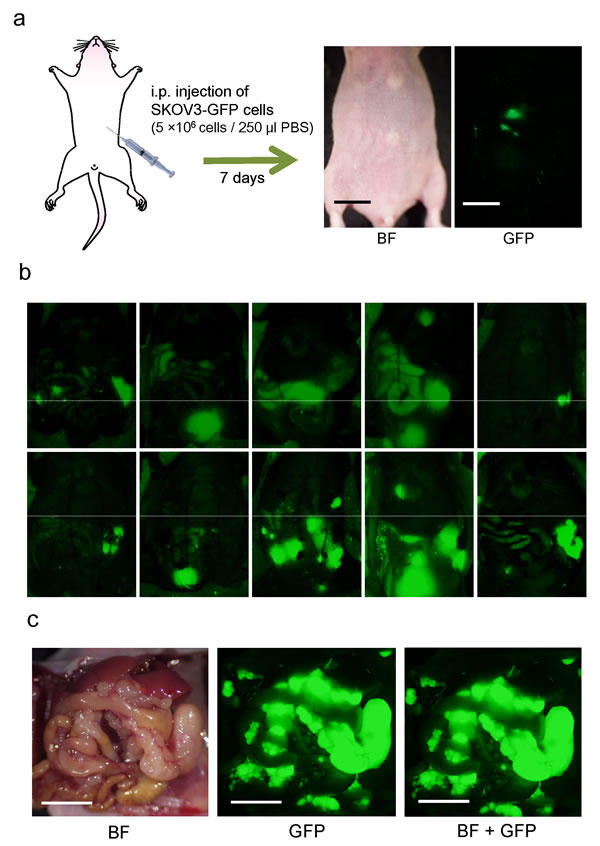 Two weeks after i.p. implantation of SKOV3-GFP cells (5×106), tumor dissemination was confirmed in all 10 mice on the peritoneum visualized with GFP imaging (Fig. 2). Tumors were confirmed at sacrifice and laparotomy. Disseminated tumors growing in the abdominal cavity led to animal death at approximately 40 days (Fig. 2). 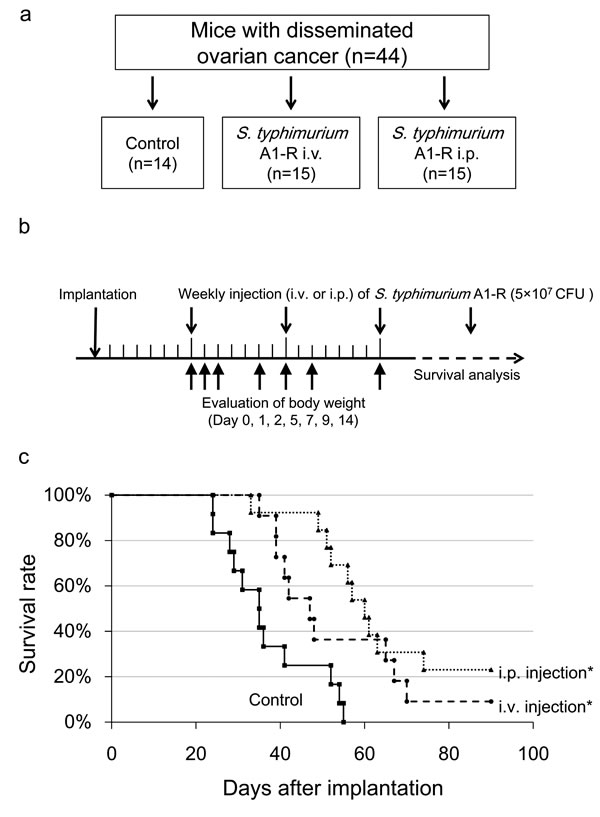 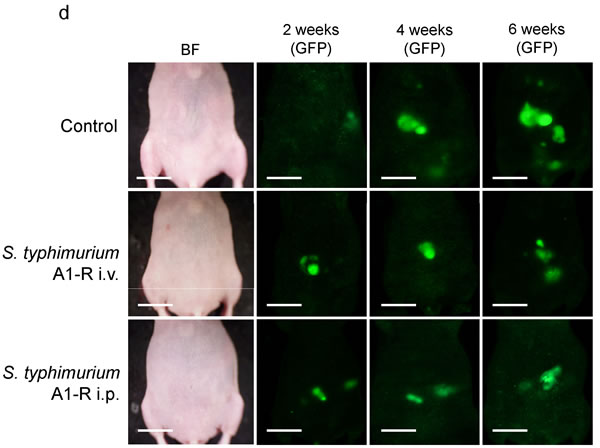 Figure 3: S. typhimurium A1-R treatment of disseminated ovarian cancer. a. Study design for comparing the route of administration of S. typhimurium A1-R. b. Treatment schedule. On day 0, SKOV3-GFP cells were (5×106 ) injected into the peritoneal cavity in 45 nude mice. On day 7, tumor formation was confirmed in 44 mice. Mice were divided into three groups. S. typhimurium A1-R (5×107 CFU) was injected i.v. or i.p. once a week starting from day 7. To assess the toxicity of A1-R treatment, the body weight of all mice was measured on days 0, 1, 2, 5, 7, 9, 14. c. Survival curves of treated and control groups of mice. The survival period of the treated mice was significantly prolonged compared with the untreated control group (P = 0.025 in i.v. group; P < 0.001 in i.p. group). d. Representative time-course images of treated and control mice (bright-field [BF] and GFP imaging, Bar: 1 cm).

The tumor-targeting of disseminated ovarian cancer strategy developed in the present report could also be used with previously-developed tumor targeting strategies [28-35]. 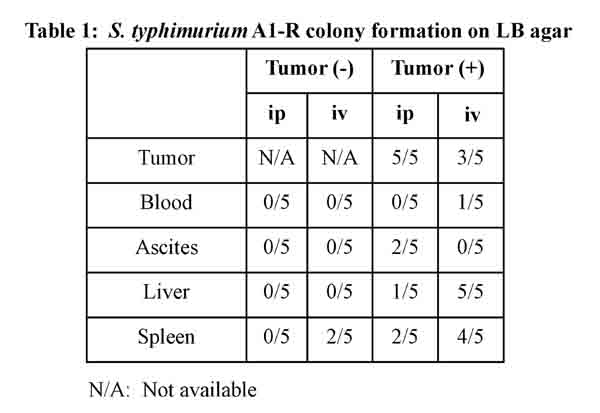 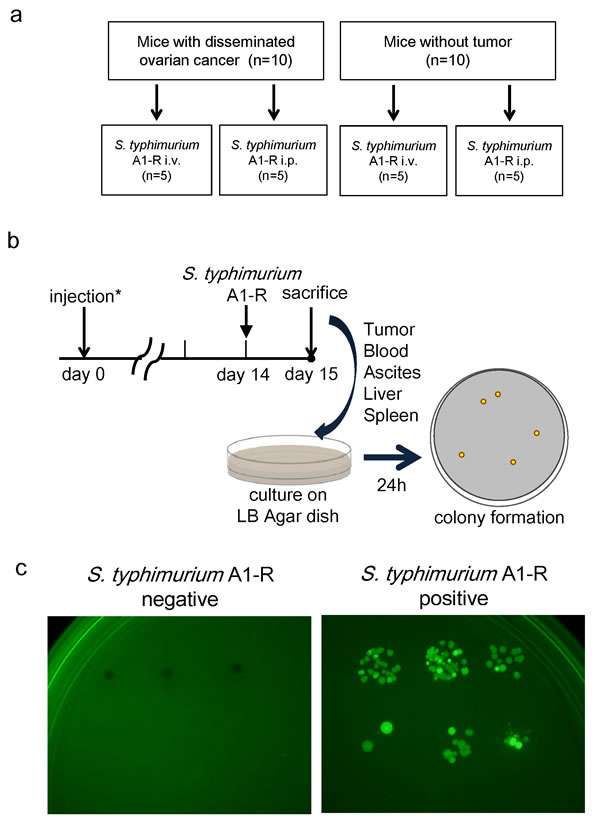 The SKOV3-GFP [36] human ovarian cancer cell line (AntiCancer, Inc., San Diego, CA) was used for this study. Cells were maintained in Dulbecco’s modified Eagle’s medium supplemented with 10% fetal bovine serum (Sigma-Aldrich). All media were supplemented with penicillin and streptomycin (Gibco-BRL). Cells were cultured at 37°C with 95% air and 5% CO2.

Athymic nude mice (nu/nu) (AntiCancer, Inc.), 7 weeks, were used. Mice were kept in a barrier facility under HEPA filtration. Mice were fed with autoclaved laboratory rodent diet. All animal studies were conducted in accordance with the principles and procedures outlined in the NIH guide for the Care and Use of Laboratory Animals under assurance number A3873-1.

SKOV3-GFP cells were grown in 6-well plates to a density of approximately 1×103 cells/well. S. typhimurium A1-R GFP were diluted in cell culture medium and added to the cancer cells at either 1×107, 1×108 or 1×109 CFU/ml and incubated for 60 min at 37°C. The cells were rinsed and cultured in medium containing gentamycin sulfate (20 μg/ml) to kill external, but not internal, bacteria. After seven days culture, cancer-cell colonies were fixed with ethanol and then stained with crystal violet. The number of colonies and the ratio of colony areas were assessed by ImageJ (National Institutes of Health, Bethesda, MD).

To establish a mouse model of ovarian cancer dissemination in the peritoneal cavity, SKOV3-GFP cells (5×106) suspended in 250 μl PBS were injected into the peritoneal cavity in nude mice. Two weeks after implantation, tumor formation were assessed with fluorescence imaging and laparotomy. The Olympus OV100 Small Animal Imaging System (Olympus, Tokyo, Japan) was used for whole body imaging in live mice [37].

Seven days after the implantation of SKOV3-GFP cells as described above, intra-abdominal tumor formation was confirmed with fluorescence imaging in 44 mice. The 44 mice were divided into three groups (Fig. 3a):

The overall survival time of each group was determined. The body weight of all mice was measured at day 0, 1, 2, 5, 7, 9, 14 in order to assess toxicity of S. typhimurium A1-R therapy.

Data comparisons between two groups were assessed using the Student’s t-test. When more than two groups were assessed, analysis of variance (ANOVA) was used. The Kaplan-Meier method was used for survival analysis. The log-rank test was used for statistical significance of the difference between the two groups. Differences were considered significant when P < 0.05. Data are expressed as mean ± standard error (SE). Statistical analyses were performed with EZR (Saitama Medical Center, Jichi Medical University).