Mutations in 16 targetable oncogenic genes were examined using reverse transcription polymerase chain reaction (RT-PCR) and direct sequencing in 285 Chinese cervical cancers. Their clinicopathological relevance and prognostic significance was assessed. Ninety-two nonsynonymous somatic mutations were identified in 29.8% of the cancers. The mutation rates were as follows: PIK3CA (12.3%), KRAS (5.3%), HER2 (4.2%), FGFR3-TACC3 fusions (3.9%), PTEN (2.8%), FGFR2 (1.8%), FGFR3 (0.7%), NRAS (0.7%), HRAS (0.4%) and EGFR (0.4%). No mutations were detected in AKT1 or BRAF, and the fusions FGFR1-TACC1, EML4-ALK, CCDC6-RET and KIF5B-RET were not found in any of the cancers. RTK and RAS mutations were more common in non-squamous carcinomas than in squamous carcinomas (P=0.043 and P=0.042, respectively). RAS mutations were more common in young patients (<45 years) (13.7% vs. 7.7%, P=0.027). RTK mutations tended to be more common in young patients, whereas PIK3CA/PTEN/AKT mutations tended to be more common in old patients. RAS mutations were significantly associated with disease relapse. To our knowledge, this is the first comprehensive analysis of major targetable oncogenic mutations in a large cohort of cervical cancer cases. Our data reveal that a considerable proportion of patients with cervical cancers harbor known druggable mutations and might benefit from targeted therapy.

Cervical cancer is the seventh most common and the eighth deadliest cancer in Chinese women. In 2010, it affected approximately 77,000 women and killed over 21,000 women in China [1]. Current treatment protocols for invasive cervical cancer are mostly based on surgery and chemoradiotherapy. Despite improved multidisciplinary treatment, the prognosis of advanced/recurrent cervical cancer is still poor, with a median overall survival (OS) ranging between 10 and 13 months [2].

A detailed understanding of somatic mutations in genes that encode signaling proteins with crucial roles in cellular proliferation and survival has led to the development of highly specific inhibitors that target key oncogenic pathways. Recently, molecularly targeted therapies have dramatically improved the treatment outcomes in patients whose tumors harbor activated mutant kinases such as mutant EGFR, BRAF and HER2 or translocated ALK [3-7]. The identification of such “druggable” mutant kinases in human cancer is becoming increasingly important. However, the question of whether cervical cancers harbor identifiable driver oncogenic mutations and benefit from targeted therapy has remained largely unanswered. Neither the prevalence of activating mutations nor the relevant clinicopathological characteristics are well established, and these factors are of paramount importance in the design of clinical trials for advanced or recurrent cervical cancers.

Tumors from 285 Chinese patients with cervical cancer were examined, including 179 patients with SCCs, 62 with ACs, 34 with ASCs, and 10 with other rare histopathological types. More extensive patient data are available in Supplementary Table S2.

A total of 92 nonsynonymous somatic mutations were identified in the 285 cervical cancers by Sanger sequencing, including 77 missense substitutions, 1 nonsense substitution, 2 in-frame deletions, 1 frameshift deletion and 11 in-frame fusions (Fig. 1, Supplementary Fig.S1 and Supplementary Table S3). The mutation rates of the tested genes were 27.4% (49 of 179) in SCC, 33.9% (21 of 62) in AC, 26.5% (9 of 34) in ASC and 60% (6 of 10) in the other rare histological subtypes. The mutation rates in AC and the other rare histological types were higher than that in SCC; however, these differences were not statistically significant (P=0.335 and P=0.066, respectively).

Figure 1: Distribution of mutations of the 16 tested genes in the 285 Chinese cervical cancers.

Eleven (3.9%) cancers were found to harbor FGFR3-TACC3 fusions. Four variants were identified (Fig. 3). The FGFR1-TACC1, EML4-ALK, CCDC6-RET and KIF5B-RET fusions were not found in any of the cancers. 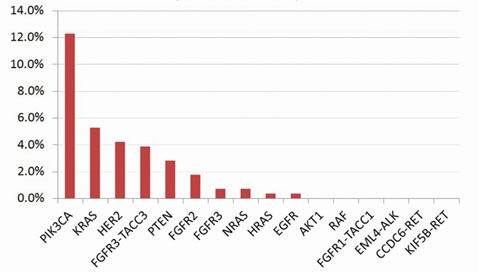 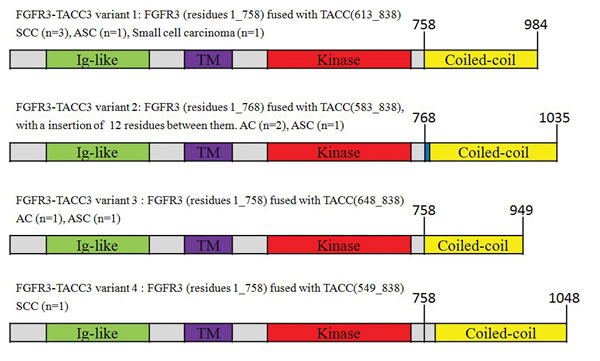 Clinicopathological characteristics of the patients with mutations 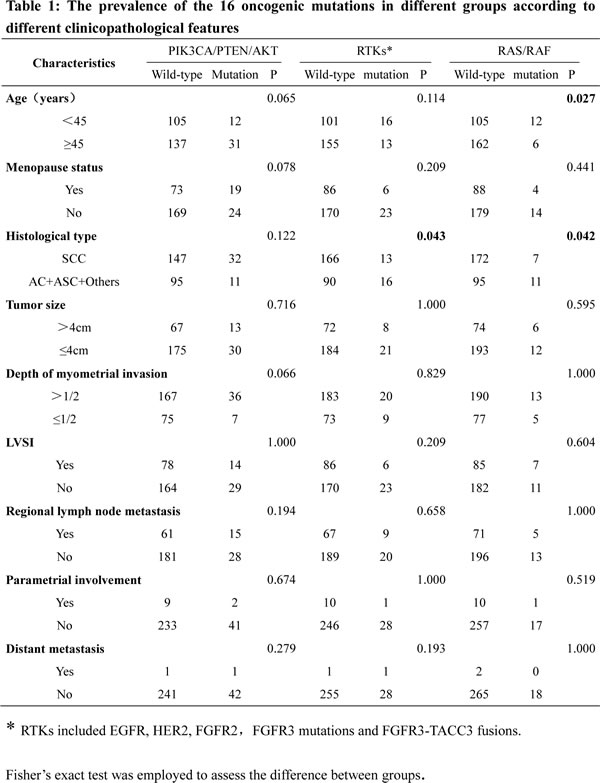 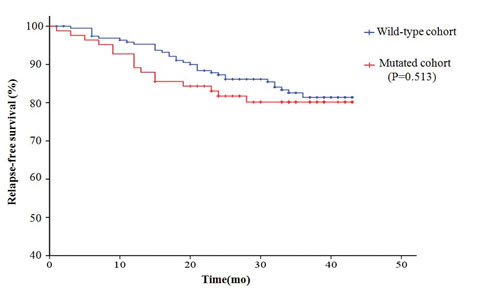 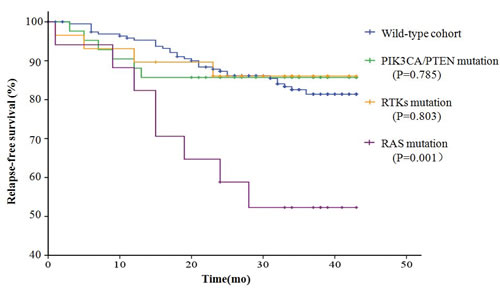 Recently, the development of targeted therapeutics has made it both necessary and valuable to evaluate genetic alterations in various cancers and to subdivide tumors based on the results of molecular genotyping. Currently, drugs that target mutant EGFR, RAF, HER2, ALK, RET and FGFRs are clinically available [3-7, 9, 10]. To date, inhibitors of RAS, PIK3CA, PTEN or AKT1 have not been approved by US Food and Drug Administration (FDA); however, inhibitors of downstream targets such as mTOR and MEK have shown therapeutic efficacy in a wide variety of tumors [11-14]. Furthermore, small molecules that irreversibly bind to mutant KRAS (G12C) have been developed and have shown promising antitumor activity in vitro [15]. According to the Catalogue of Somatic Mutations in Cancer (COSMIC) database, the mutation profiles of these genes and their clinicopathological characteristics in cervical cancer are not well established. Oncogenic mutations were examined in samples that were very limited in size (typically less than 100 cases), and the gene mutation status was not concomitantly investigated [16-19]. In addition, it has remained unclear whether patients with cervical cancer harbor gene translocations. To the best of our knowledge, the present study is the first comprehensive and concurrent large-scale analysis of oncogenic mutations in Chinese patients with cervical cancer.

The main findings of this study were that 29.8% of the patients with cervical cancer harbored oncogenic mutations in the 16 genes assessed, and the mutation rates of PIK3CA/PTEN, RTK and RAS were 15.1%, 10.2%, and 6.3%, respectively. RTK and RAS mutations have been found to be more common in histological subtypes of non-SCCs that are resistant to radiation and chemotherapy and are associated with poor survival [20-22]. Approximately one third of the patients with recurrent disease harbored those targetable mutations. Thus, our data provide a clear rationale for clinical trials of targeted inhibitors in patients with cervical cancer especially those advanced and recurrent cases.

In addition, our results confirm and extend previous findings reported in the literature. The KRAS mutation rate in this study (5.3%) was lower than that described in previous studies (6.3-13.9%) (19, 28, 29), which might be a result of the different distribution of histological subtypes or different populations. BRAF mutations in cervical cancer were not observed in this study, as previously reported in a study by Pappa et al. [28]. The frequency of PIK3CA mutations was 12.3% in this study, which was consistent with COSMIC data and the outcomes of a recent next-generation sequencing study [30]. In the present series of patients who underwent surgery-based multimodality therapy, patients harboring PIK3CA mutations did not have a survival disadvantage. However, McIntyre et al. reported that PIK3CA mutation was strongly associated with worse overall survival in early-stage cervical cancer patients treated with radical chemoradiotherapy [31]. Further investigations are warranted to confirm whether PI3K pathway inhibitors could improve radiotherapy efficacy in cervical cancer patients who have PIK3CA or PTEN mutations. Recurrent HER2 mutations in cervical cancer were first discovered by Ojesina et al. [30], and our findings confirmed that HER2 mutations were not unusual among cervical malignancies. HER2 in-frame deletions in small-cell neuroendocrine carcinomas warranted further investigation and functional validation. Our study suggested that somatic mutations in EGFR, FGFR2, and FGFR3 are rare in cervical cancers; this result was similar to the findings of previous studies [16, 17, 32].

Although many oncogenic gene mutations were analyzed in this study, there were some limitations. First, protein expression and gene copy number changes were not examined in this study, which might have prevented us from identifying patients who would be suitable for targeted therapy, such as those with HER2 or EGFR overexpression. Second, not all mutations were located in well-known hotspots; thus, some of the mutations identified in this study might serve as ‘passenger mutations’. Third, the primers used for the translocation tests did not cover all isoforms of the tested genes. We could therefore not exclude the possibility that some gene fusions might have been missed.

This research was approved by the Institutional Review Board of Fudan University Shanghai Cancer Center (FUSCC). All patients provided written informed consent. A total of 285 Chinese women were included in this study after it was determined that they met the following criteria: pathologically confirmed primary cervical squamous cell carcinoma (SCC), adenocarcinoma (AC), adenosquamous carcinoma (ASC) or small cell carcinoma; stage IB1-IIA2 disease according to the International Federation of Gynecology and Obstetrics (FIGO) staging system; no neoadjuvant chemotherapy or radiation; and no history of pre-operative cone biopsies. Cervical tumor specimens were collected during radical hysterectomy procedures from January 2011 to December 2012. Each specimen was cut into two blocks. One was fixed in formalin, embedded in paraffin, sectioned and stained with Hematoxylin & Eosin for histological examination. The other was stored in RNAlater solution (Ambion) at -80°C for mutational analysis. Only specimens in which tumor cells accounted for more than 50% of the whole tissue were processed to mutational analysis. Histopathological characteristics and tumor contents were confirmed by two pathologists (X Shen and W Yang). Clinical and pathological data were prospectively collected and included the following: age, menopause status, histological subtype, FIGO stage, tumor size, depth of invasion, lymphovascular space involvement (LVSI), lymph node status, distant metastasis, parametrial involvement and tumor differentiation. The patients were followed up in the clinic or by telephone to determine disease recurrence.

RNA and genomic DNA were extracted from the tumor tissues according to the standard protocols provided with the DNA/RNA Isolation Kit (Tiangen Biotech); 2 µg of total RNA was reverse-transcribed into single-stranded cDNA using an M-MLV Reverse Transcriptase Kit(Invitrogen). The presence of mutations was determined in NRAS (exons 1-3), KRAS (all exons), HRAS (exons 1-3), BRAF (exons 13-16), PIK3CA (exons 8-11,18-20), PTEN (exons 5-9), AKT1 (exons 1-3), HER2 (exons 5-12, 16-25), EGFR (exons 18-22), FGFR2(exons 5-9,10-15) and FGFR3 (exons 5-9) as well as in FGFR3-TACC3, FGFR1-TACC1, EML4-ALK, CCDC6-RET and KIF5B-RET fusions. cDNA was PCR amplified with KOD plus neo DNA polymerase (Toyobo). The PCR products were sequenced from both ends using Sanger sequencing. All mutations were confirmed by an additional independent PCR. The primers and the detailed PCR protocol are provided in Supplementary Table S1. Germline mutations were excluded by sequencing the DNA extracted from paired peripheral blood cells or corresponding formalin-fixed and paraffin-embedded normal uterus corpus tissues . Paraffin embedded tissues were retrieved from archival specimens stored in pathology department and reviewed by the two pathologists to exclude tumor involvements.

The association between mutations and clinicopathological characteristics was analyzed by Fisher’s exact test. Relapse-free survival (RFS) was calculated using the Kaplan–Meier method, and the differences between the groups were determined using the log-rank test. The 2-sided significance level was set at P<0.05. The data were analyzed using IBM SPSS Statistics 19 (IBM Inc.).

The authors indicate no conflict of interest.