8The Institute of Medical Science, The University of Tokyo, Tokyo, Japan

Pancreatic cancer is a highly aggressive malignancy, with < 50% patients surviving past 6 months after the diagnosis. Because chemotherapeutic options only marginally prolong life, the current mortality of patients with pancreatic cancer is nearly identical to its incidence [1–13]. Therefore, future studies are expected to elucidate the pathogenesis of pancreatic cancer and explore new possibilities for diagnostic and therapeutic approaches to the disease.

Recently, bacterial infection causing periodontal disease has attracted considerable attention as a risk factor for pancreatic cancer [3, 6, 7, 10, 14]. Individuals with periodontal disease have increased levels of markers of systemic inflammation, and oral bacteria can spread to the bloodstream [3, 6, 7, 15], gastrointestinal tract [16–19], liver [20, 21], or pancreas [22] and can even reach the brain [23]. Thus, oral bacteria may reach the pancreas too through the circulation or transductal transmission from the biliary tract and can contribute to pancreatic carcinogenesis by acting jointly with other pancreatic cancer risk factors that modulate inflammation and the immune response, e.g., obesity, smoking, and the ABO genetic variant [4, 6, 7].

The association between tumor Fusobacterium species and clinical, pathological and molecular characteristics in pancreatic cancers

During the follow-up of the 283 patients with pancreatic cancer, 109 patients died (all deaths were confirmed to be attributable to pancreatic cancer). The median follow-up period for cancer-specific survival was 30.3 months. In the Kaplan–Meier analysis, significantly shorter survival was observed in the Fusobacterium species-positive group [median cancer-specific survival (months): 17.2 versus 32.5; log-rank p = 0.021; Figure 2].

The association of molecular alterations with patient survival in pancreatic cancer 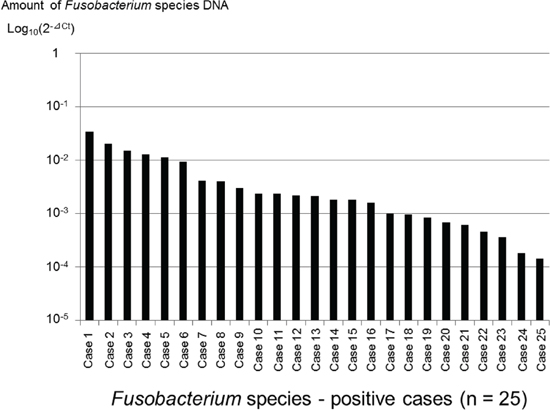 Table 1: Clinical or molecular features of pancreatic cancers according to tumor Fusobacterium status

Percentages (%) indicate the proportion of cases with a specific clinical, pathological, or molecular feature within a given dichotomous category of tumor Fusobacterium species status. The p values were calculated using t-test for age and χ2 test for gender; tumor location in pancreas; tumor size; lymph node invasion; year of diagnosis; KRAS mutation; expressions of microRNA-21, microRNA-31, and microRNA-143; MLH1 methylation and CIMP status or Fisher's exact test for disease stage. 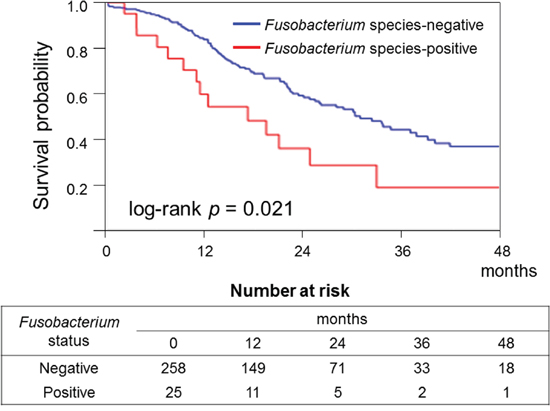 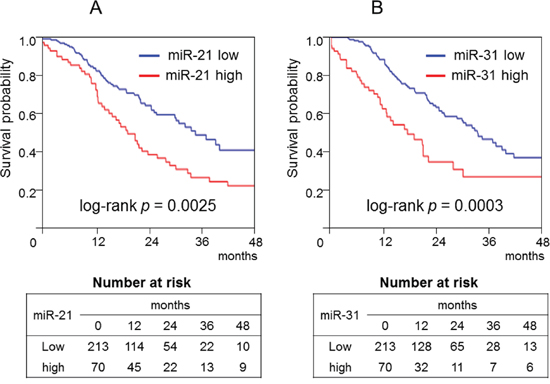 Aside from periodontal disease, the genus Fusobacterium species is associated with inflammatory disorders of the gastrointestinal tract [16–19], with pancreatic abscesses [22, 25], hepatic abscesses [20, 21], cerebral abscesses [23] and Lemierre's syndrome [32]. These data suggest that oral Fusobacterium species may reach the pancreas through the circulation (i.e., blood or lymphatic vessels). Furthermore, multiple studies have shown that the oral microbiota overlaps with the gastrointestinal tract microbiota; these data suggest that there are multiple avenues for the dissemination of oral bacteria within the body [7, 33, 34]. Transductal transmission from the biliary tract (either ascending or descending) has also been considered [31, 35]. Further research is needed to identify the route of Fusobacterium species' spread to the pancreas. 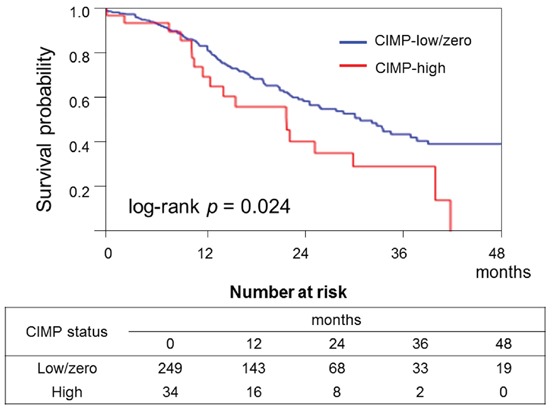 Table 2: The association between tumor Fusobacterium species status and mortality of patients with pancreatic cancer

The multivariate, stage-stratified Cox model included the Fusobacterium species variable adjusted by gender; age at diagnosis; tumor size; tumor location; year of diagnosis; KRAS mutation status; CIMP status and expression levels of microRNA-21, microRNA-31, and microRNA-143. A backward stepwise elimination with a threshold of p = 0.10 was used to select variables in the final model. Of the variables, Fusobacterium species, CIMP status, and expression level of microRNA-31 were included in the final model.

Our study has some limitations because of its cross-sectional (observational) design and the risk that an unknown bias (e.g., the selection bias) may confound the results. Furthermore, our analysis does not include treatment data; thus, another unknown bias, e.g., differential treatment assignment, may skew the results. In addition, we excluded cases without available tumor tissue: another possible bias. Nevertheless, the results of our regression analyses are adjusted for potential confounders, including disease stage, year of diagnosis, CIMP status, and miR-21 and miR-31 expression levels.

The term “CIMP” has been repeatedly used over the past decade to describe CpG island promoter methylation in various human malignancies, including pancreatic cancer [12, 28, 37–39]. In contrast to colorectal cancer research, in the field of pancreatic research, CIMP is an unfamiliar term. One study showed that CIMP-high status is observed in five of 36 (14%) pancreatic cancers; however, there is no significant association between the CIMP status and the prognosis [12]. In contrast, our present data show that CIMP-high status (according to methylated promoters that are widely used in colorectal cancer research), and MLH1 methylation are detected in 12% and 3.9% of pancreatic cancers. Although neither CIMP status nor MLH1 methylation correlate with tumor Fusobacterium species status, our results show that the CIMP-high status is associated with an unfavorable prognosis of pancreatic cancer. CIMP is believed to be useful not only for molecular characterization but also for the assessment of a response to treatment in a variety of human cancers [37]. Therefore, further research is needed to clarify the role of epigenetic alterations in pancreatic cancer.

MicroRNAs constitute a class of small non-coding RNA molecules that function as post-transcriptional gene regulators and have been increasingly recognised as biomarkers of various human cancers [2, 5, 8, 9, 40–42]. Certain microRNAs are induced during the macrophage inflammatory response and have the ability to regulate host-cell responses to pathogens [43]. In addition, pathogens themselves may regulate microRNA expression [44]. MicroRNAs influence networks that control innate and adaptive immunity and apoptosis by regulating signaling pathways [43]. Previous studies suggest that cells can secrete microRNAs that can be delivered into recipient cells where they can change gene expression [45, 46]. Accordingly, it is possible that immune system-related microRNAs can travel to the pancreas, even if the pathogens are located elsewhere. Nevertheless, no previous studies have reported an association between microbiota and microRNA expression in gastrointestinal cancer.

We collected FFPE tissue specimens of 302 pancreatic cancers [pancreatic ductal adenocarcinomas (PDACs)] of patients who underwent surgical treatment at Sapporo Medical University Hospital, Teine Keijinkai Hospital or Otaru Municipal Hospital between 2003 and 2013. To avoid the selection bias as much as possible, we collected the consecutive FFPE cancer tissue specimens. To clarify the association between Fusobacterium and survival in patients with pancreatic cancer, we limited the patients who received adjuvant chemotherapy to those treated with gemcitabine or 5-FU (including S-1). Patients who were treated with chemotherapy or radiotherapy prior to resection were excluded.

Histological data on pancreatic cancer tissue specimens were evaluated by pathologists (T.S. and T.H.) who were blinded to the clinical and molecular information. Cancer-specific survival was defined as the period from the surgical treatment of pancreatic cancer to death or last follow up. The patients were followed until death or until July 2014, whichever came first. Informed consent was obtained from all the patients before specimen collection. This study was approved by the institutional review boards of the three participating institutions and complied with the tenets of the Helsinki Declaration. Our analysis of the pancreatic cancer tissue specimens is fully compliant with the REMARK guidelines [48].

Pyrosequencing of KRAS, NRAS, BRAF, and PIK3CA and analysis of MSI

The Kaplan–Meier method and log-rank test were performed to assess the association between Fusobacterium species status of pancreatic cancer and patient mortality. In the analysis of cancer-specific mortality, deaths from causes other than pancreatic cancer were censored. To adjust the results for confounders, we used multivariate Cox proportional hazards regression models to calculate HR according to tumor Fusobacterium species status of pancreatic cancer. We included disease stages (I, II, III, IV, or unknown) as a stratifying variable using the “strata” option in the SAS “proc phreg” command. The multivariate model initially included gender (male versus female), age at diagnosis (continuous variable), tumor size (<2, 2–4, 4–6, or ≥6 cm), tumor location in the pancreas (head, body or tail), year of diagnosis (continuous variable), KRAS mutation status (in codon 12/13/61/146; present versus absent), CIMP status (CIMP-high versus CIMP-low/zero), and miR-21, miR-31, and miR-143 expression levels (high versus low expression levels). To avoid overfitting, variables in the final model were selected using backward stepwise elimination with a threshold of p = 0.10.

Drafting of the manuscript; K.M., K.N.

Final approval of manuscript; All authors