We report that the IgH 3’ regulatory region (3’RR) has no role on μ chain transcription and pre-BCR expression in B cell progenitors. In contrast, analysis of heterozygous IgH aΔ3’RR/bwt mice indicated that the 3’RR controls μ chain transcripts in mature splenocytes and impacts membrane IgM density without obvious effect on BCR signals (colocalisation with lipid rafts and phosphorylation of Erk and Akt after BCR crosslinking). Deletion of the 3’RR modulates the B cell fate to less marginal zone B cells. In conclusion, the 3’RR is dispensable for pre-BCR expression and necessary for optimal commitments toward the marginal zone B cell fate. These results reinforce the concept of a dual regulation of the IgH locus transcription and accessibility by 5’ elements at immature B cell stages, and by the 3’RR as early as the resting mature B cell stage and then along further activation and differentiation.

Lymphopoiesis is coupled with programmed accessibility of Ig genes to transcription and to several major transcription-dependent DNA remodelling events [1, 2]. While 5′ cis-regulatory elements (Eμ and IGCR1) control V(D)J recombination [2–4], the IgH 3′ regulatory region (3′RR) controls class switch recombination (CSR) [2, 5] and IgH somatic hypermutation (SHM) [6]. B cells are continuously instructed by B cell receptor (BCR) signals to make crucial cell fate decisions at several checkpoints during their development [7, 8]. Such an important choice made by immature B cells is to become either a follicular (FO) or a marginal zone (MZ) B cell. Influence of the BCR strength on B cell fate has been investigated by various experimental approaches (such as mutations affecting BCR components and proteins implicated in BCR signalling) both affecting pre-BCR and BCR signals and thus resulting in multiple anomalies at various stages of B cell maturation [7, 8]. The commonly accepted hypothesis is that the BCR strength controls B cell fate with weak BCR signalling inducing MZ B cell development while strong BCR signalling favours the development of FO B cells [7, 8]. We studied heterozygous IgH aΔ3′RR/bwt mice. We report that the 3′RR has no role on the pre-BCR expression but governs μ gene transcription and thus BCR expression specifically in mature B cells where its deletion affects the B cell fate toward less MZ B cells.

Mouse substrains have dissimilar differentiation programs culminating in different B cell fate and BCR expression [9] (Figure 1). To assess B cell differentiation issues linked to genetic background, our study was carried out in heterozygous IgH aΔ3′RR/bwt mice, compared to wt F1 IgH awt/bwt mice. Analysis of bone marrow B cells with IgM-allotype specific antibodies indicated similar percentages and numbers of B cells expressing either a or b allotype in aΔ3′RR/bwt and awt/bwt mice; as a negative control IgMa-expressing B cells were not detected in mice carrying heterozygous deletion of the Eμ region (aΔEμ/bwt) [10] (Figure 2A and 2B). The mean membrane IgMa (but not IgMb) density was reduced in heterozygous aΔ3′RR/bwt compared to awt/bwt mice (Figure 2C). Analysis of immature B220+AA4.1+ B cells indicated a slight increase of the percentage (but not the numbers) of cells expressing the a allotype in heterozygous aΔ3′RR/bwt mice (Figure 2D). A decreased membrane IgMa (but not IgMb) density was found in heterozygous aΔ3′RR/bwt mice compared to awt/bwt mice (Figure 2E). Finally, real time PCR analysis indicated a reduced transcription of the a allele (but not b) in B220+AA4.1+ sorted B cells from aΔ3′RR/bwt mice compared to awt/bwt mice (Figure 2F). Taken altogether these results are indications that the 3′RR-deficient allele underwent V(D)J recombination at a rate and a timeframe similar to the wt allele. Indeed any delay in IgH chain expression from the mutated allele would be expected to result in unbalanced expression of IgH alleles in immature B cells from heterozygous mice (as found with the aΔEμ allele) [10]. Bone marrow IgMaΔ3′RR B cells had a lower IgH transcription and membrane IgM expression confirming an early 3′RR transcriptional control immediately after the pre-B cell stage [11]. The slight accumulation of newly formed IgMaΔ3′RR B cells may imply a B cell fate decision defect. 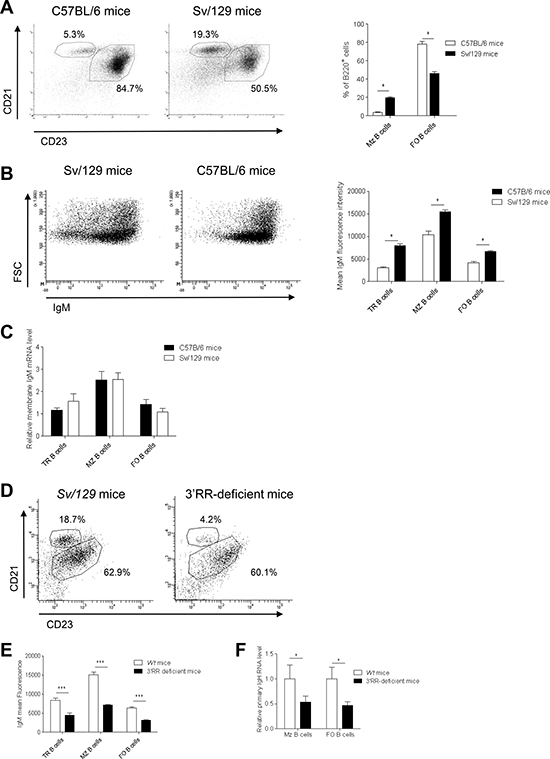 Expression of a 3′RR-deleted allele in peripheral B cells

In contrast to bone marrow B-lineage cells, a strong disadvantage of the mutated a allotype finally manifested in mature splenic B cells of IgH aΔ3′RR/bwt mice (Figure 3A–3C). This precisely identified the transition from immature to mature B cells as the time point where the 3′RR-deficiency altered B cell differentiation and introduced a biased representation of the mutant IgH allele. In aΔ3′RR/bwt mice, proportion (but not numbers) of splenic IgMaAA4.1+ transitional (TR) B cells was increased when compared to awt/bwt mice (Figure 3D, left part). Deletion of the 3′RR had no effect on FO B cells (B220+CD21lowCD23high) (Figure 3D, middle part) while a marked reduction of MZ B cells (B220+CD21highCD23low) was found (Figure 3E, right part). The mean IgMa (but not IgMb) intensity was significantly reduced in aΔ3′RR/bwt compared to awt/bwt mice in TR, FO and MZ B cells (Figure 3E). Real time PCR analysis showed a reduced IgMa (but not IgMb) transcription in sorted TR, FO and MZ B cells from aΔ3′RR/bwt (Figure 3F). Thus, deletion of the 3′RR affected membrane IgM expression in mature B cell and the B cell fate toward the MZ phenotype. These results markedly contrast with the lower FO phenotype resulting from hypomorphic expression of either Igα or of an IgH-chain allele, both affecting pre-BCR and BCR expression and resulting in multiple anomalies at various stages of B cell maturation [12, 13]. The cell fate decision made by immature B cells to become a FO or a MZ B cell is controlled by the BCR strength [7, 8]. We investigated BCR signalling in homozygous aΔ3′RR/aΔ3′RR mice that had lower levels of MZ B cells and IgM density than in awt/awt Sv/129 mice (Figure 1). Engagement of BCR with anti-IgM stimulation efficiently induced the co-localisation between BCR and lipid rafts in 3′RR-deficient splenocytes (Figure 4) that is a prerequisite for an efficient BCR signalling [14, 15]. We show that surface Ig cross-linking induces amounts of BCR signalling (Erk and Akt phosphorylations) in 3′RR-deficient B cells without obvious differences to wt mice (Figure 4).

Deletion of the 3′RR had no impact on bone marrow B cell populations on the use of a 3′RR-deficient allele in competition with a wt allele. This reinforced studies highlighting the key role of 5′ IgH locus regulatory elements in recombination and transcription at immature stages leading to pre-BCR expression [2, 3, 10, 16]. In contrast, a late developmental defect appears in peripheral B lymphocytes with an impact of the 3′RR deletion on IgH chain expression. Whether several models reported that lowered tonic BCR signalling alters B cell fate by favouring the development of MZ B cells in the detriment of FO B cells [7, 8], other studies do not [17, 18]. We show that deletion of the 3′RR lowered IgH transcription, BCR density, and BCR signalling with consequences on B cell fate, disadvantaging MZ subset in favour to FO B cells. This suggests that B cell fate might not be only governed by the BCR tonic signal but relies on fine IgH chain tuning, by multiple regulatory elements including the 3′RR, at specific stages of B cell development. While 5′ IgH elements solely control IgH (and thus pre-BCR) expression at immature stages, the 3′RR comes into IgH (and thus BCR) transcriptional control in mature B cells.

Our research has been approved by our local ethics committee review board (Comité Régional d’Ethique sur l’Expérimentation Animale du Limousin, Limoges, France) and carried according the European guidelines for animal experimentation. The disruption of the 3′RR was carried out in a Sv/129 embryonic stem cell line [5]. Mice were bred and maintained under specific pathogen-free conditions. Age-matched littermates (8 weeks old) were used in all experiments. 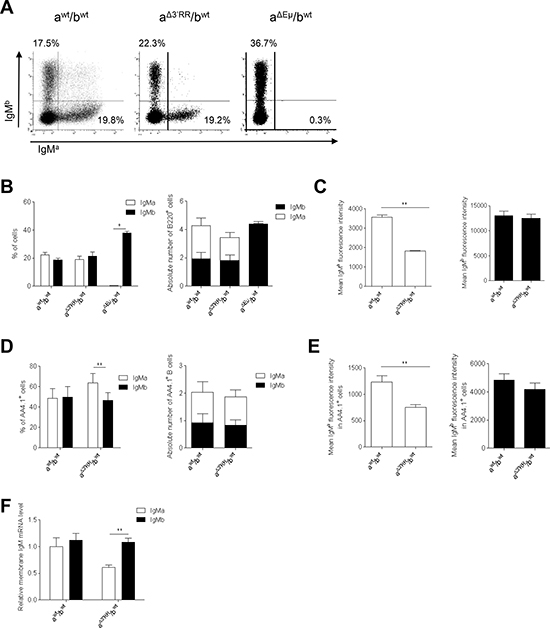 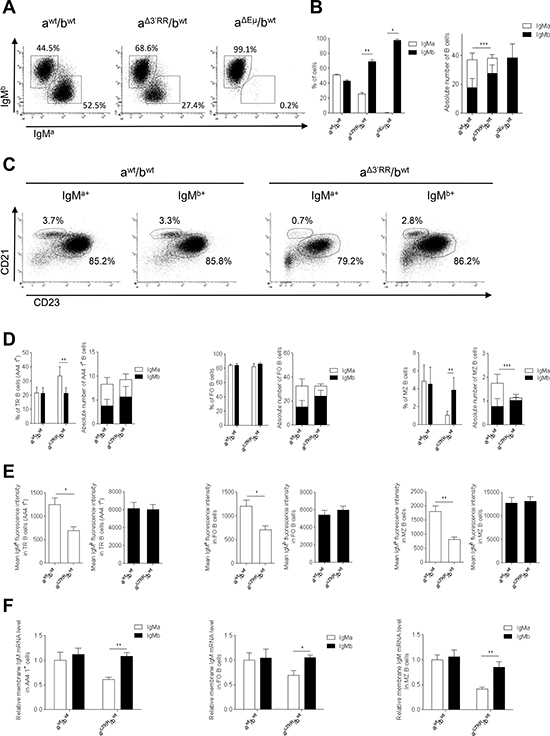 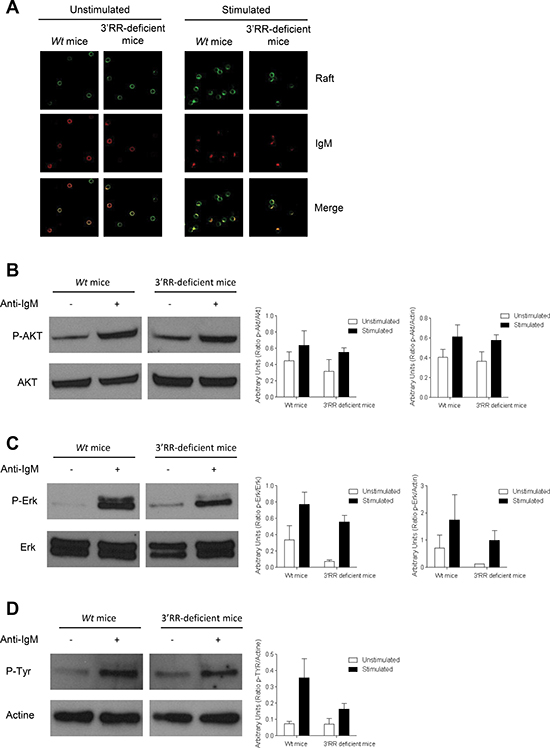 Figure 4: BCR signalling response in 3′RR-deficient B splenocytes. (A) BCR and lipid rafts colocalization experiments. 3′RR deficient mice (aΔ3′RR/aΔ3′RR) and Sv/129 wt mice (awt/awt) were investigated. CD43− B cells were stained with cholera toxin Alexa 488 followed by stimulation with anti-IgM Alexa 594 labelled antibodies. Arrows point to areas where lipid rafts colocalise with membrane BCR. One representative experiment out of four is shown. (B) BCR signalling in 3′RR-deficient mice. CD43− splenic B cells (3 × 106 cells/ml) from wt Sv/129 mice (awt/awt) and 3′RR-deficient mice (aΔ3′RR/aΔ3′RR) (were stimulated with 15 μg/ml of anti-IgM at 37°C for 10 min. Western Blot experiments were performed with 30 μg of proteins. Actin was used as an internal loading control. phosphor-Akt and Akt were investigated with specific anti-phosphor-Akt and anti-Akt antibodies, respectively. One representative experiments out of 3. Relative intensity of phosphor-Akt bands were related to Akt and actin bands (located in D). (C) phosphor-Erk and Erk were investigated with specific anti-phosphor-Erk and anti-Erk antibodies, respectively. One representative experiments out of 3. Relative intensity of phosphor-Erk bands were related to Erk and actin bands (located in D). (D) Total phosphor-Tyr was investigated with specific anti-phosphor-Tyr antibodies. One representative experiments out of 3. Relative intensity of phosphor-Tyr bands were related to actin bands. No significant differences for p-Akt, Akt, p-Erk, Erk and p-Tyr between 3′RR-deficient mice and wt mice (Mann-Whitney U-test).

For BCR and lipid raft colocalization experiments, splenic B cells were purified by hypotonic lysis of red blood cells followed by incubation with anti-CD43-coated MicroBeads (Miltenyi Biotec), which bind to all splenic cells except resting mature B cells. B cells were obtained by passing the cells through a negative depletion column attached to an OctoMACS magnet (Miltenyi Biotec). 1 × 106 CD43− B splenocytes (100 μl) were stained with 80 ng of cholera toxin B, a marker of lipid rafts, conjugated to Alexa 488 and 20 μg of goat anti-mouse IgM conjugated to Alexa 594 (Molecular Probes) for 30 min on ice then 5 min at 37°C for the stimulated conditions. Cells were then fixed with 4% PFA. For non stimulated conditions cells were incubated 30 min with an anti-IgM-PE on ice and analysed with a Zeiss LSM 510 META confocal microscope. Homozygous IgH aΔ3′RR/aΔ3′RR and Sv/129 mice (IgH awt/awt) were used for experiments.

17. Liu X, Manser T. Antinuclear antigen B cells that down-regulate sueface B cell receptor during development to mature, follicular phenotype do not display features of anergy in vitro. J Immunol. 2005; 174:4505–4515.