In another previous study, LQ significantly inhibited pancreatic cancer tumor growth and metastasis in orthotopic models with no overt toxicity. LQ also increased survival of tumor‐bearing mice. The antitumor efficacy of LQ was comparable with gemcitabine (GEM), but with less toxicity than GEM [2].

The present report uses FUCCI imaging to demonstrate the effect of LQ on the cell cycle arrest of HeLa cells.

Untreated control HeLa-FUCCI cells exhibited a combination of orange-red and yellow-green nuclei. Approximately 60% of the cells were in S/G2/M and 40% in G0/G1. The cultures were approaching confluence. After treatment with LQ (9 mg/ml) for 72 hours, the HeLa-FUCCI cells were almost all arrested in G0/G1. Only approximately 5% were in S/G2/M phases and the remainder in G0/G1. After treatment with paclitaxel (0.01 μM), for 72 hours, approximately 5% of the cells were in G0/G1 with the rest of the cells arrested in S/G2/M. Almost all the paclitaxel-treated cells fluoresced yellow-green, in contrast to LQ-treated cells, which almost all fluoresced orange-red (Figure 1).

Effect of LQ or paclitaxel on the cell-cycle phase distribution of FUCCI-HeLa cells growing in 2.5D Matrigel culture

Control cells in Gelfoam® histoculture exhibited a combination of orange-red and yellow-green nuclei. Approximately 60% of the cells were in S/G2/M with almost 20% in M, a surprisingly large percentage. Treatment with LQ (9 mg/M) for 72 hours resulted in over 80% of the cells being arrested in G0/G1, similar to 2 D plastic culture and 2.5 D Matrigel culture. Paclitaxel (0.01 μM) resulted in 90% of the cells arrested in S/G2/M, as in 2D and 2.5D culture, after 72 hours treatment (Figure 3).

Methionine deprivation, either by nutritional means or recombinant methioninase (rMETase) treatment, selectively trapped cancer cells in S/G2 [6, 7]. Excess thymidine, or its analogs, arrested cancer cells in S-phase [8–10]. The calcium-channel blocker mibefradil arrested glioblastoma cells at the G1/S checkpoint [11]. Statins, such as Lovastatin, can arrest cancer cells in G0/G1 [12, 13]. PDO332991, a pyridopyrimidine-selective inhibitor of cyclin-dependent kinases 4 and 6, induced early-G0/G1 arrest in various cancer cell types, including melanoma and breast cancer in vitro, and in cancer xenograft models. RO-3306, also a cyclin-dependent kinase inhibitor, reversibly arrested 95% of treated cells in G2 phase [14–17]. Since LQ has been shown to be non-toxic, it has potential to maintain cancers in a quiescent state for long periods of time.

Previously-developed concepts and strategies of highly-selective tumor targeting [18–29] can take advantage of cell-cycle imaging of cancer cells and G0/G1 blockage by LQ, described in the present report.

Matrigel (100 μl/chamber well) was pipetted into the center of the well and then allowed to spread evenly for 15–30 minutes at 37°C in order for the Matrigel to solidify. FUCCI-expressing HeLa cells (4 × 104) were grown for 4 days in Matrigel and DMEM supplemented with 10% fetal bovine serum.

Sterilized Gelfoam® was cut and placed in wells. The Gelfoam® was hydrated in DMEM medium for 24 hours. A pellet of HeLa-FUCCI cells (106) in 20~30 μl DMEM supplemented with 10% fetal bovine serum, was gently placed on top of the Gelfoam®. Medium was added to the same height as the Gelfoam®. 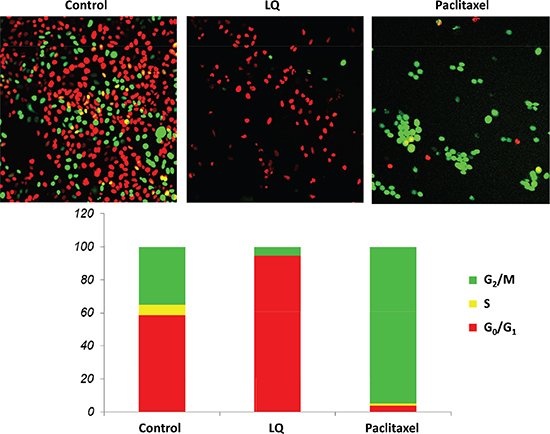 Figure 1: LQ or paclitaxel treatment of FUCCI-HeLa cells growing in 2D culture. G0/G1 arrest of HeLa FUCCI cells was observed with LQ (9 mg/ml) treatment. Untreated control cells were distributed throughout the cell cycle. Paclitaxel was used as the positive control and resulted in an S/G2/M block. Bar graphs show the distribution of the cell-cycle phases with each treatment or control. See Materials and Methods for details.

LQ consists of a mixture of the following Chinese medicinal herbs: Sinapis alba, Atractylodes macrocephala, Coix lacryma-jobi, and Polyporus adusta (School of Pharmacy, Nanjing University of Traditional Chinese Medicine, Nanjing, China) as previously reported [30]. The ratio of the herbs used was (2:3:4:3). Dried plant parts used were: Sinapis albe, seed; Atractylodes macrocephala, root; Coix lacryma-jobi, kernel; Polyporus adusta, whole mushroom. Each herb was extracted in boiling water for 20 mins, the solution was filtered and the residue extracted with 75% ethanol when filtered. The water extract and ethanolic extract were combined and concentrated by lyophilization. The lyophilized powder was suspended in PBS and the mixture was vortexed for 1 min and incubated at 80°c for 30 min., cooled to room temperature, and was then centrifuged at 2000 rpm for 10 min. The supernatant was collected at a final concentration to 90 mg/ml and diluted and filtered through a 0.2 mm membrane for in vitro use [31].

Paclitaxel (Taxol) (Bedford Laboratories, Bedford, OH) was prepared by diluting to 0.2 μM as a stock solution. 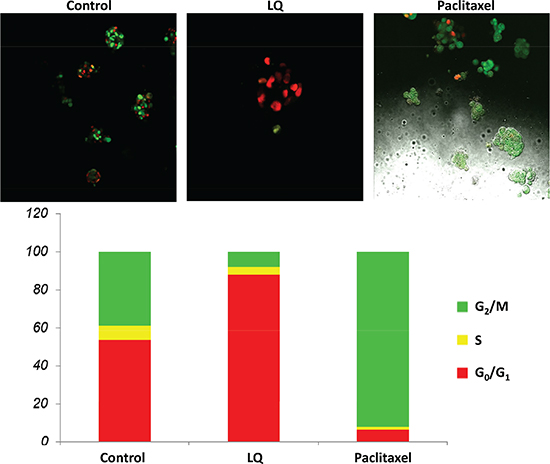 Figure 2: LQ or paclitaxel treatment of FUCCI-HeLa cells growing in 2.5D Matrigel culture. G0/G1 arrest of HeLa-FUCCI cells was observed with LQ (9 mg/ml) treatment. Untreated control cells were distributed throughout the cell cycle. Paclitaxel was used as the positive control and resulted in an S/G2/M block. Bar graphs show the distribution of the cell-cycle phases. See Materials and Methods for details. 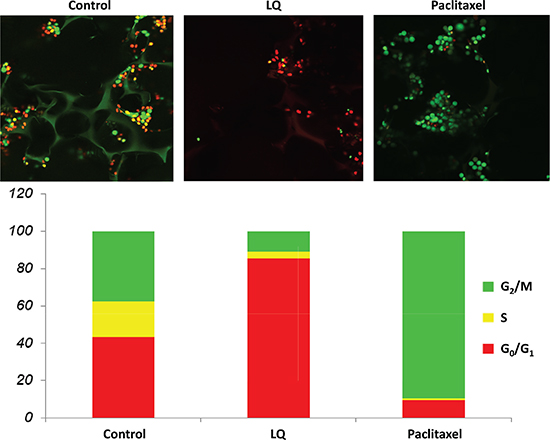 Figure 3: LQ or paclitaxel treatment of FUCCI-HeLa cells growing in Gelfoam® histoculture. G0/G1 arrest of HeLa-FUCCI cells was observed with LQ (9 mg/ml) treatment. Untreated control cells were distributed throughout the cell cycle. Paclitaxel was used as the positive control and resulted in an S/G2/M block. Bar graphs show the distribution of the cell-cycle phases. See Materials and Methods for details.

This paper is dedicated to the memory of A. R. Moossa, M.D.

This study was supported in part by National Cancer Institute grant CA132971.

9. Chandrasekaran B, Kute TE, Duch DS. Synchronization of cells in the S phase of the cell cycle by 3’-azido-3’-deoxythymidine: implications for cell cytotoxicity. Cancer Chemother Pharmacol. 1995; 35:489–495.