* These authors contributed equally to this work as co-first authors

To investigate the frequency and the prognostic impact of fibroblast growth factor receptor 1 (FGFR1) gene amplification in 526 curatively resected esophageal squamous cell carcinoma (ESCC). Using fluorescent in situ hybridization, high amplification was defined by an FGFR1/centromer 8 ratio is ≥ 2.0, or average number of FGFR1 signals/tumor cell nucleus ≥ 6.0, or percentage of tumor cells containing ≥ 15 FGFR1 signals or large cluster in ≥ 10%. Low amplification was defined by ≥ 5 FGFR1 signals in ≥ 50%. FGFR2 and FGFR3 mutations were assessed by direct sequencing in 388 cases and no mutation was detected. High and low amplification were detected in 8.6% and 1.1%, respectively. High FGFR1 amplification had significantly shorter disease-free survival (34.0 vs 158.5 months P=0.019) and overall survival (52.2 vs not reached P=0.022) than low/no amplification group. After adjusting for sex, smoking, stage, histology, and adjuvant treatment, high FGFR1 amplification had a greater risk of recurrence (adjusted hazard ratio [AHR], 1.6; P=0.029) and death (AHR, 1.53; P=0.050). High amplification was significantly higher in current smokers than former and never-smokers (Ptrend<0.001) and increased proportional to smoking dosage. High FGFR1 amplification is a frequent oncogenic alteration and an independent poor prognostic factor in resected ESCC.

Esophageal cancer (EC) is the sixth most common cause of cancer death worldwide [1]. Despite the improvement of surgical technique and medical treatment, prognosis remains poor, with 5-year survival rate of less than 40%.[2] EC consists of two major histologic subtypes; esophageal squamous cell carcinoma (ESCC) and adenocarcinoma (EAC). Both histologic subtypes have different risk factors and epidemiology. ESCC continues to be the major subtype of EC in Asia, and the main risk factors include smoking and alcohol abuse.[3] In contrast, EAC predominately affects the Caucasian, and is closely associated with gastroesophageal reflux disease, Barrett’s esophagus, and obesity. [4-7] Compared with ESCC, EAC shows younger age onset, male predominance and frequent occurrence in distal third of the esophagus.[8] Given widely different epidemiological and clinical features, EAC and ESCC may represent distinct disease entities which may benefit from different therapeutic approaches.

Amplification and overexpression of human epidermal growth factor receptor 2 (HER2; also known as ERBB2) was more frequent in EAC than ESCC and there was a strong concordance of HER2 status in primary and metastatic cancer.[9] Therefore, various clinical trials evaluating the efficacy of HER2 targeting agents were reported for the patients with advanced esophageal and esophagogastric junction (EGJ) adenocarcinoma.8-10 In the phase II trials for HER2 amplified EGJ adenocarcinoma, lapatinib, a dual tyrosine kinase inhibitor of ERBB1 and HER2 demonstrated modest response.[10, 11] The therapeutic implication of HER2 protein overexpression or gene amplification has been demonstrated in the Trastuzumab for Gastric Cancer (ToGA) trial [12]. In this trial, addition of trastuzumab (anti-HER2 antibody) to standard chemotherapy significantly improved response rate, progression-free survival and overall survival compared with chemotherapy alone in HER2-positive advanced gastric and EGJ adenocarcinoma. Based on the results of the ToGA trial, HER2 testing is routinely recommended for all patients with metastatic gastric or EGJ adenocarcinoma, and trastuzumab should be considered for HER2-positive cases.

Despite a rapid and enthusiastic development of targeted therapies in gastric or EGJ adenocarcinoma, no therapeutically tractable target has been identified for ESCC. Recently, comparative genomic analysis showed different DNA copy number alterations between EAC and ESCC.[13, 14] Among those, high copy number gains of cancer-associated genes, such as SOX2, PIK3CA, CCND1, and FGFR1, were more frequently observed in ESCC than in EAC, suggesting that genomic gain of these oncogenes may be therapeutic targets for ESCC.

Fibroblast growth factor receptor 1 (FGFR1) is a member of family of receptor tyrosine kinases (FGFR1-4), and its activation by amplification, mutation, or translocation leads to tumor cell proliferation and survival in many cancers.[15, 16] Potentially actionable FGFR rearrangements were identified in diverse solid tumors including lung cancer, oral cancer, and breast cancer. [17-19] FGFR1 amplification has been frequently reported in lung squamous cell carcinoma (SqCC), small cell lung cancer, and SqCC of head and neck (SCCHN), for which smoking is a clear and dominant risk factor.[15, 16, 20-28] Overall, the frequency of FGFR1 amplification was reported to be 5.6%-24.8% in lung SqCC and 15%-17.4% in SCCHN, suggesting that this genetic alteration mainly target squamous cell histology.[16, 20-25, 27, 28] Furthermore, FGFR1 amplification has been associated with poor prognosis or unfavorable clinicopathologic parameters in lung SqCC and SCCHN. Because ESCC has risk factors in common with lung SqCC and SCCHN, we hypothesized that FGFR1 amplifications is associated with pathogenesis and poor prognosis in ESCC.

In this study, we sought to determine the frequency, prognostic impact and association with smoking dosage of FGFR1 amplification in surgically resected ESCC. Furthermore, we also evaluated the frequency of FGFR2 and FGFR3 mutations in ESCC.

A total of 526 Korean patients who underwent curative esophagectomy were analyzed. The clinical characteristics of the enrolled patients are presented in Table 1. There were 489 male and 37 female with a median age of 66 years (range 35-98). Median tumor size was 3 cm and approximately half of tumors had pT3 or pN0. Pathologic stages were I in 22.4%, II in 42.8%, and III in 34.8%. Two thirds (60.3%) were located in the lower esophagus, and more than half of patients had moderately differentiated SqCCs. The majority of patients were current (39.0%) or former smokers (38.6%), and median smoking dosage was 30.0 pack-years (range 0-150). Adjuvant treatment was given in 140 patients (26.6%), and 87 of those (62.1%) were treated by concurrent chemoradiotherapy. The proportions of adjuvant therapy according to stage were 5.9% in stage I, 21.8% in stage II, and 45.9% in stage III.

‡Pathologic stage at the time of surgical resection was determined according to the American Joint Committee on Cancer (seventh edition) guidelines.

§ FGFR1 numbers are average numbers of FGFR1 signals per nucleus, and ratios are FGFR1/CEN8 ratios. 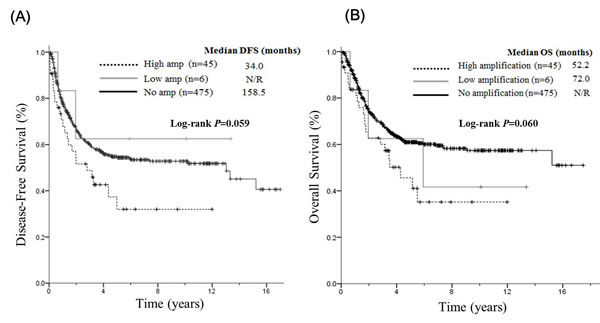 Survival Outcomes According to FGFR1 Amplification

* Clinical stage at the time of initial diagnosis was determined according to the American Joint Committee on Cancer (seventh edition) guidelines. 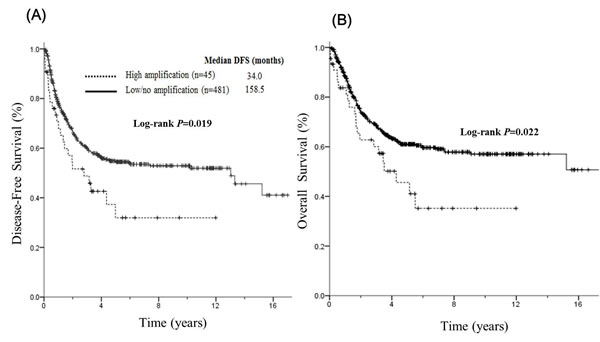 FGFR2 and FGFR3 mutations were assessed by direct sequencing in 388 cases with FFPE tissues available and no FGFR2 or FGFR3 mutation was detected.

Association between FGFR1 amplification and smoking 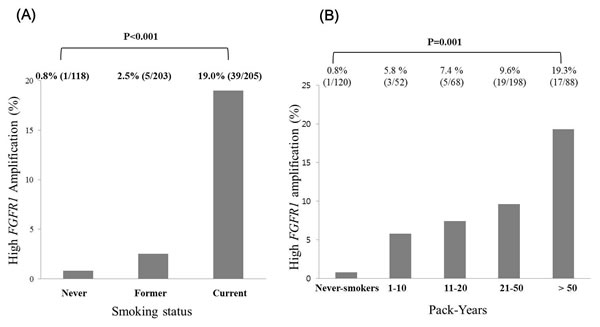 Unfortunately, FISH criteria for FGFR1 amplification has not yet been standardized. Indeed, definition of FGFR1 amplification by FISH technique has been highly variable in the previous studies in lung cancer and breast cancer.[16, 24, 25, 28, 33, 34] Unlike breast cancer, lung SqCC exhibits small-clusters and co-amplifications of FGFR1 and CEN8.[25] Therefore, FGFR1 FISH assay needs to differentiate between true amplification and polysomy. In a large cohort study, Schildhause et al [25] proposed a more sophisticated FGFR1 FISH criteria using average gene copy number per nucleus, FGFR1/CEN8 ratio, and percentage of gene clusters at the same time. By the addition of FGFR1/CEN8 ratio, 8 out of 47 cases (17.0%) were newly classified as high amplification in this study.(25) Similarly, in our study, 12 out of 45 high amplification group (26.7%) might have been misclassified as low/no amplification group if the criterion for FGFR1/CEN8 ratio was not included. Considering clinical benefit appeared in patients with high FGFR1/CEN8 ratio in clinical trials with FGFR inhibitors,[31, 32] this scoring system might serve as a standardized screening tool to select patients who gain greater benefit from treatment with FGFR inhibitors. Our criteria need further validation in the future clinical trials with FGFR inhibitors in ESCC patients.

Somatic mutations of FGFR2 and FGFR3 were reported in 12% and 30% of endometrial and urothelial cell carcinomas, respectively.[35, 36] Inhibitor–sensitive 5 mutation loci for FGFR2 and 6 mutation loci for FGFR3 were noticed in 3% of lung SqCC samples.[37]Here, we show no FGFR2 and FGFR3 mutations in our 388 ESCC patients. This may be explained by the limited sensitivity of the Sanger sequencing, tumor heterogeneity or molecular difference of ESCC from lung SqCC.

The main limitation of our study include its retrospective nature and patient selection. Therefore, our findings should be validated in an independent cohort and response data to FGFR-targeted therapies in the future clinical trials.

This study was conducted in a cohort of patients with ESCC who underwent radical esophagectomy at Severance Hospital and Samsung Medical Center, Seoul, Korea, between 2002 and 2010. The criteria used for patient selection included (1) surgically resected SqCC of the thoracic esophagus (R0 resection), (2) availability of primary tumor tissue, (3) no distant metastasis, and (4) no preoperative treatment. The tumor samples of 664 patients were available for examination of FGFR1 amplification. We excluded 115 cases (17.3%) who received neoadjuvant treatment. Twenty-three patients (3.5%) were excluded because of incomplete survival follow-up and/or smoking data. All diagnosis were reviewed by two experienced pathologist (Y.L.C. and H.K.K) and confirmed by hematoxylin and eosin staining. Three representative cores measuring in 2-mm-diameter for each paraffin-embedded primary tumor were assembled into tissue microarray blocks.

Patients’ information was collected by reviewing the medical records for evaluation of clinicopathologic characteristics and survival outcome. Staging was determined using the 7th edition American Joint Committee on Cancer guideline of tumor, node, and metastasis (TNM) classification. Smoking status such as never-smoker, former smoker, and current smoker were defined as previous studies.[38] The study was approved by the institutional review board of Severance Hospital and Samsung Medical Center.

Disclosure of Potential Conflicts of Interest

This study was supported by a grant from the Korea Health Technology R&D Project, Ministry of Health & Welfare, Republic of Korea (HI12C1440, B. C. Cho) and by a faculty research grant of Yonsei University College of Medicine for 2012(6-2012-0044, H. Kim) and by the R&D Program for Society of the National Research Foundation (NRF) funded by the Ministry of Science, ICT & Future Planning (NRF-2013M3C8A1078501, Y. L. Choi).