MicroRNA-630 (miR-630) plays dual roles in tumor progression in various human cancers. However, the role of miR-630 in chemoresistance and prognosis in non-small cell lung cancer (NSCLC) remains to be elucidated. This retrospective study enrolled 114 surgically resected patients with NSCLC who experienced tumor relapse and underwent cisplatin-based chemotherapy. The aim was to examine the possible association between miR-630 (and its targeting of Bcl-2 expression) and the response to cisplatin-based chemotherapy. Patients with tumors expressing low miR-630, high Bcl-2, and a combination of both were more likely than their counterparts to show unfavorable responses to cisplatin-based chemotherapy. Kaplan–Meier and Cox regression analysis indicated that low miR-630, high Bcl-2, and a combination of both may independently predict poor overall survival and short relapse-free survival in patients with NSCLC. Six types of NSCLC cells were collected to determine the inhibitory concentration of cisplatin yielding 50% viability (IC50) by the MTT assay. The IC50 value for cisplatin was negatively correlated with miR-630 expression levels among these cell types, except for A549 cells. Mechanistically, low miR-630 expression conferred cisplatin resistance and colony formation by de-targeting Bcl-2 in NSCLC cells. We therefore suggest that low miR-630, high Bcl-2, and a combination of both may potentially predict an unfavorable chemotherapeutic response and poor outcome in patients with NSCLC.

Chemotherapy remains an essential element of personalized care for patients with non-small cell lung cancer (NSCLC), despite the improvements in molecularly targeted and immunologically based therapies over the past two decades [1]. However, resistance to chemotherapy and tumor relapse have severe adverse impacts on patient outcomes. Therefore, treatments that can increase chemosensitivity are urgently needed for improving outcomes and the quality of life in patients with NSCLC.

One promising approach involves the use of microRNAs (miRs), which are biomarkers showing diagnostic and therapeutic potential in various human cancers, including NSCLC [2, 3] . One specific form, microRNA-630 (miR-630), is confirmed to play dual roles in tumor progression in a number of human cancers. For example, miR-630 acts as an oncogene, promoting tumor progression and consequently resulting in poor prognosis in colorectal, renal cell, gastric, and ovarian cancers [4–9]. Conversely, miR-630 has a tumor suppressor role, inhibiting tumor progression and metastasis in esophageal squamous cell, breast, and lung cancer [10–12]. Therefore, we suspected that the oncogenic and tumor suppressor roles of miR-630 in different types of cancers might dictate chemoresistance and chemosensitivity.

Surprisingly, miR-630 can reduce cell proliferation of A549 lung cancer cells and confer cisplatin resistance by increasing p27 expression [13]. However, in the same A549 cells, although miR-630 may inhibit cell proliferation by targeting CDC7 kinase, it may also maintain the apoptotic balance by targeting multiple modulators, such as PARP3, DDIT4, EP300, and p53 [14]. Upregulation of miR-630, which may target Bcl-2, and Bcl2l2 to modulate the apoptotic pathway, can occur following exposure of head and neck squamous cell carcinoma cells to cisplatin, which promotes the ATM-dependent phosphorylation of ΔNp63α [15]. Unfortunately, patients with NSCLC showed no cisplatin-based chemotherapeutic response to support findings of cisplatin sensitivity mediated by miR-630.

The present retrospective study collected 114 tumors that were surgically resected from NSCLC patients who had experienced tumor recurrence and had also received cisplatin-based chemotherapy. The aim was to evaluate expression of miR-630 and its targeting Bcl-2 by the real-time polymerase chain reaction (PCR) and immunohistochemistry and to analyze statistically the association of the expression of both molecules with the observed chemotherapeutic response. The prognostic value of miR-630 and Bcl-2 expression on overall survival and relapse free survival was assessed by Kaplan–Meier and Cox regression models. The miR-630 expression levels were also evaluated in a panel of lung cancer cells to select cells that showed high and a low expression of miR-630 for miR-630 manipulation and to verify whether miR-630 might modulate cisplatin sensitivity by targeting Bcl-2.

Low miR-630 expression, high Bcl-2 expression, or a combination of both are associated with poor outcome in patients with NSCLC 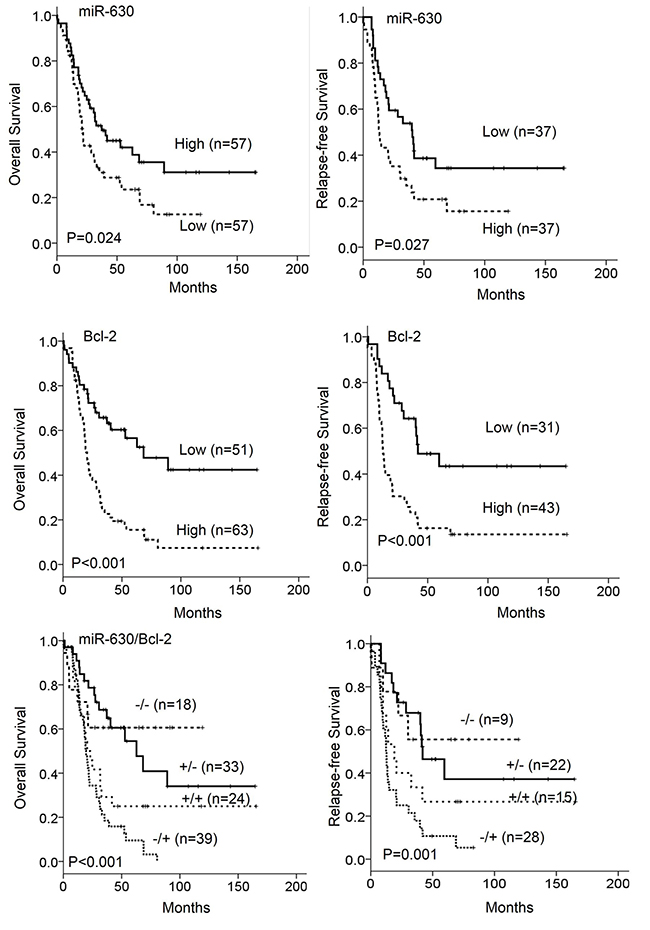 Table 2: Cox regression analysis for the prognostic value of miR-630 and Bcl-2 expression levels on OS and RFS in lung cancer patients

*HR for all cases was adjusted by age, gender, smoking status, tumor type and stage.

Table 3: The association of miR-630 and Bcl-2 expression levels with the response to cisplatin-based therapy in lung cancer patients 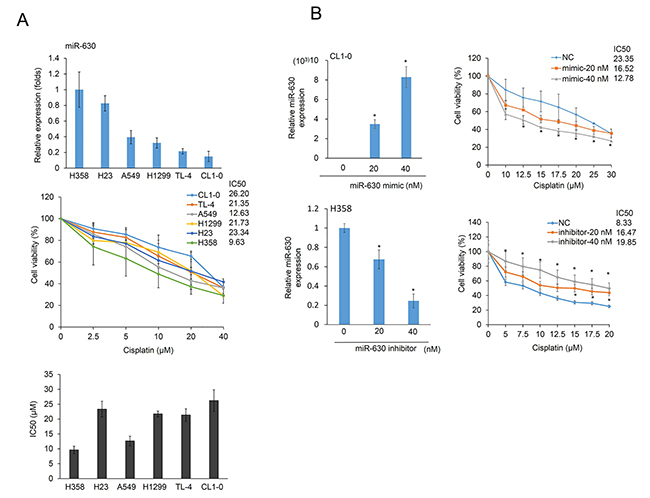 Figure 2: MiR-630 expression levels are associated with cisplatin resistance. (A) Six lung adenocarcinoma cells were treated with five concentrations of cisplatin. After 48 h, the dose-response curves, determined by the MTT assay, were used to calculate the IC50 values of these cells. MiR-630 expression of these cells was evaluated by real-time PCR. (B) A miR-630 inhibitor was transfected into H358 cells. MiR-630 mimics were transfected into low miR-630 expressing CL1-0 cells. After 24 h, the cells were treated with various concentrations of cisplatin to calculate the IC50 values. NC: nonspecific control. P value was calculated by the Student’s t-test. The significant differences in experimental groups were compared to vehicle or indicated treatment (*P < 0.05). N.s.: Non-significant.

Representative profiles of Annexin-V/PI staining are presented in Figure 3A (left panel). Transfection with a miR-630 mimic markedly increased the percentage of apoptotic cells induced by cisplatin in CL1-0 cells (Figure 3A middle panel). By contrast, the induction of apoptotic cells by cisplatin was almost completely eliminated in H358 cells transfected with a miR-630 inhibitor when compared with control cells (Figure 3A right panel). Representative cisplatin-induced colony formation in both cell types following miR-630 mimic and inhibitor treatments are presented in Figure 3B (upper panel). The findings of Annexin-V/PI staining and suggested that miR-630 may trigger cisplatin-induced apoptosis and reduction in colony formation. 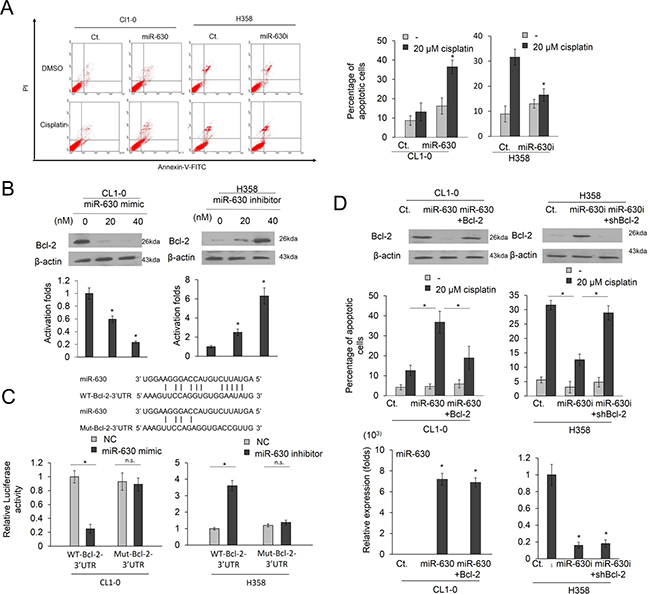 In cell model experiments, low miR-630 expression may promote colony formation and cisplatin resistance by a de-targeting of Bcl-2. This result was consistent with previous studies indicating that miR-630 may suppress cell proliferation and induce apoptosis by targeting Bcl-2 [15, 17]. However, a contradictory finding of cisplatin sensitivity mediated by miR-630 was reported in A549 lung cancer cells [13, 14].

Cao et al. (2014) showed that miR-630 played dual roles in A549 cell apoptosis as it targets the cell proliferation regulator CDC7 kinase and the apoptotic modulator EP300 to promote p53 protein instability [14]. However, the IC50 value for cisplatin in p53 wild-type A549 cells was markedly elevated following transfection with a miR-630 mimic and reduced following transfection with an inhibitor (Supplementary Figure 1), which supported the findings of Kroemer’s group [13]. This finding indicates that miR-630 may confer cisplatin resistance in A549 cells. These results showed that the effects of miR-630 on cisplatin resistance differed in A549 cells when compared to CL1-0 and H358 cells. As shown in Figure 1A, miR-630 expression levels were relatively lower in p53-WT TL-4 cells than in p53-WT A549 cells. As expected, the IC50 value of TL-4 cells was greater than that of A549 cells (21.35 vs. 12.63). Real-time PCR analysis indicated that the expression of Bcl-2 was relatively higher in TL-4 cells than in A549 cells (Supplementary Figure 2). Mechanistic studies further confirmed that low miR-630 conferred cisplatin resistance in TL-4 cells via de-targeting Bcl-2 (Supplementary Figure 3). These results obtained from p53-WT cells were similar with the observations of p53-mutated cells (Figures 2 and 3). These results strongly suggested that low miR-630 may confer cisplatin resistance in p53-WT and -mutated lung cancer cells via de-targeting Bcl-2.

The study included 114 patients who underwent resected at the Department of Chest Surgery, Taichung Veteran General Hospital, Taichung, Taiwan, between June 1994 and December 2006. The tumor type and stage of each specimen was histologically determined according to the World Health Organization’s (WHO) classification system. The median follow-up time was 24.3 months (range from 1 to 165.3 months) and the end of the follow-up period was Dec. 2007. Seventy-four of 114 patients were received adjuvant cisplatin-based chemotherapy. As shown in the Supplementary Table 1, two patients received single-agent cisplatin, but 74 patients received cisplatin plus etoposide, gemzar, taxol, or taxotere. The IRB protocol 201305020 was approved by Taipei Medical University.

The lung cancer cells were obtained from the American Type Culture Collection (ATCC) and cultured as described.

MTT cytotoxicity assay and Annexin V/PI staining were performed as described in a previous report [18].

Bcl-2 immunohistochemical staining scores were defined as described previously [16] and the intensities of signals were evaluated independently by three observers. Immunostaining scores were defined as the cell staining intensity (0 = nil; 1 = weak; 2 =moderate; and 3 = strong) multiplied by the percentage of labelled cells (0–100%), leading to scores from 0 to 300. A score of over 150 was rated as “high” immunostaining, while a score of less than 150 was rated as “low”.

Western blotting was performed as described in a previous report [19].

DWW and HL contributed to the study concept and design. MJC, CYC, and YCW collected the clinical samples. DWW, MJC, and GCW contributed to the acquisition of data. DWW and GCW analyzed and interpreted the data. DWW made statistical analyses. HL drafted the manuscript. HL provided administrative, technical or material support. All authors discussed the results and commented on the manuscript.