Methods: In this retrospective study, tissue collected from 471 various tumors, including 397 lung cancers, was tested for MET amplification by FISH with a MET/centromere probe. PD-L1 expression was evaluated using clone SP142 and standard immunohistochemistry, and TP53, KRAS, and EGFR mutations were tested using next generation sequencing.

Conclusions: This data suggests that in lung cancer both MET and TP53 play direct roles in regulating PD-L1 opposing EGFR. Moreover, KRAS and TP53 co-mutation may cooperate to drive PD-L1 expression in lung cancer. Adding MET or TP53 inhibitors to checkpoint inhibitors may be an attractive combination therapy in patients with lung cancer and MET amplification.

In 2017, there will be approximately 220,000 new cases of lung cancer in the United States with approximately 160,000 deaths [1]. Platinum-based chemotherapy delivers a response rate of 20–35% and a median overall survival (OS) of 8–12 months in non-small cell lung cancer (NSCLC) [2, 3]. Improved understanding of the molecular signatures of NSCLC has led to the development of targeted therapeutics against epidermal growth factor receptor (EGFR), Kirsten rat sarcoma viral oncogene homolog (KRAS), or anaplastic lymphoma kinase (ALK) alterations which can result in significant response and extended OS. However, a significant percentage of NSCLC patients do not have a targetable mutation. Moreover, the 5 year OS for NSCLC, even with targeted therapeutics, is 15% [4].

The blockade of immune checkpoints, through inhibition, such as programmed cell death (PD-1)/programmed cell death ligand (PD-L1) targeting, has shown remarkable response in some patients with NSCLC [5]. Pembrolizumab, a PD-1 inhibitor, is approved for first and second line PD-L1 expressing NSCLC, after demonstrating its association with significantly improved OS compared to docetaxel [6]. Nivolumab, another PD-1 inhibitor, and atezolizumab, a PD-L1 inhibitor, are approved to treat ALK/EGFR WT and mutant metastatic NSCLC [7, 8]. Higher PD-L1 expression is associated with better efficacy of PD-1/PD-L1 therapeutics and improved response in NSCLC, [9, 10] however PD-L1 expression is not the sole determinant of response to PD-1/PD-L1 therapy and some patients who do not express PD-L1 have been shown to respond to PD-1/PD-L1 inhibition [11, 12]. While PD-1/PD-L1 inhibitors can be remarkably effective in some patients producing durable responses, only a subset of patients will benefit (e.g. 10-40% of NSCLC) [7, 13].

Attempts have been made to establish a correlation between PD-1/PD-L1 expression and NSCLC driver dysregulation [4, 14, 15]. About 50–65% of patients with EGFR-mutated NSCLC respond to EGFR tyrosine kinase inhibitors (TKIs), [16] but most patients become resistant to these treatments by acquiring a secondary point mutation in EGFR or activation of additional signaling pathways, including mesenchymal-epithelial transition factor (MET) and KRAS [17, 18]. Dysregulation of MET signaling has been shown to drive tumorigenesis in NSCLC [19]. Inhibition of MET signaling in EGFR TKI-resistant cells may restore sensitivity to EGFR inhibitors [20, 21]. Additionally, anti-tumor activity of agents targeting MET has been observed in MET-amplified EGFR WT patients [22]. The correlation between MET amplification and PD-L1 expression, particularly for EGFR WT NSCLC patients is important for therapy and has not been fully explored.

To improve on the success of checkpoint inhibitors as monotherapy, combination therapy is being considered. Conventional chemotherapy and targeted therapy are currently being considered in combination with checkpoint inhibitors [23]. Theoretically, direct correlation between two molecular abnormalities suggests collaboration and selection between these two abnormalities and targeting both drivers may be more effective as a therapeutic approach. Toward this end, we explored the correlation between PD-L1 expression and KRAS, EGFR, TP53, and MET alterations in this study.

MET is a receptor protein-tyrosine kinase for hepatocyte growth factor, which induces the RAS-ERK/MAPKs cascades through the activation of Grb2-associated binding protein 1 (Gab1) [24]. Similarly, the EGFR is a receptor tyrosine kinase that induces RAS-ERK/MAPK and AKT-PI3K-mTOR [25]. Furthermore, inactivation of the TP53 gene is well documented to cooperate with activated RAS to induce tumorigenesis [26]. 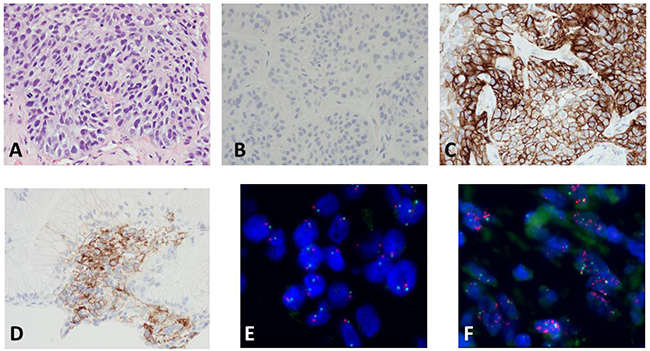 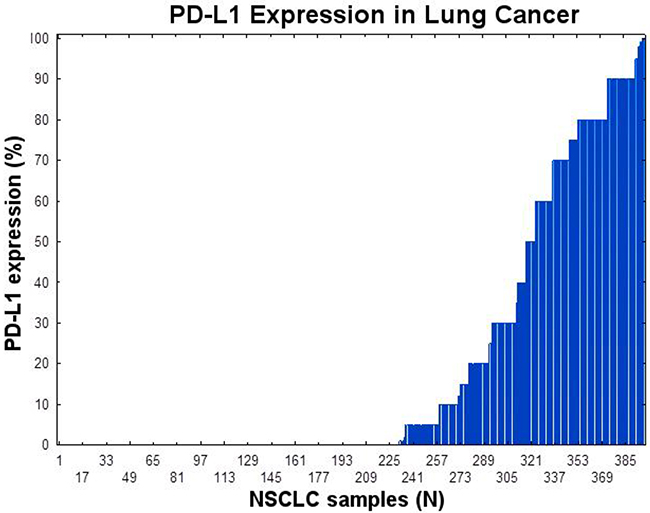 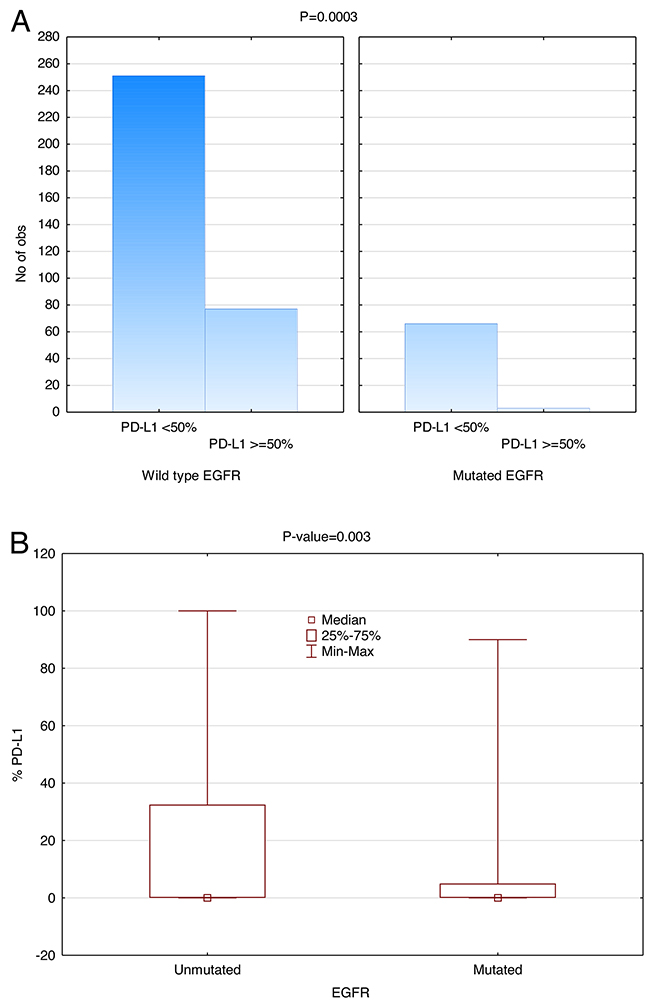 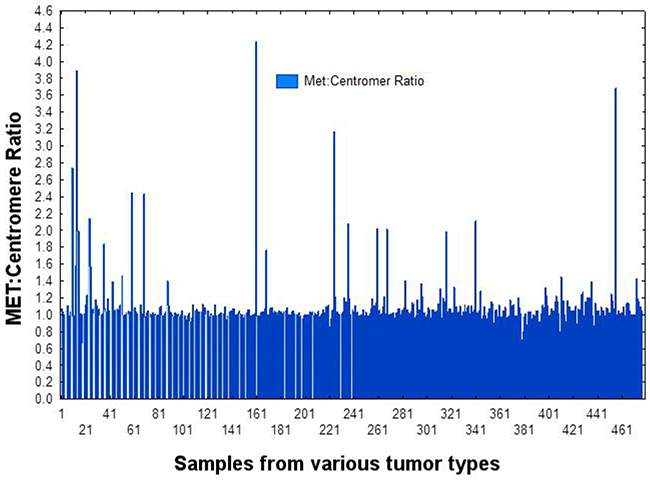 Figure 4: Establishing a cut-off point for MET Amplification by FISH (MET:centromere ratio of 1.5). Based on the signal to noise pattern show in this graph, a ratio ≥1.5 was determined to reflect amplification. 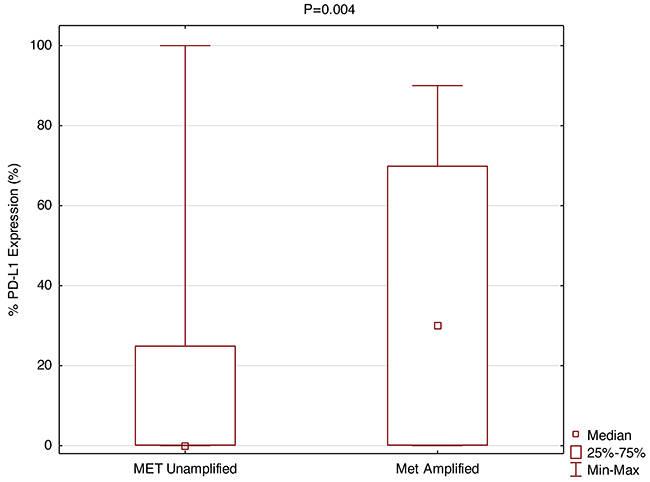 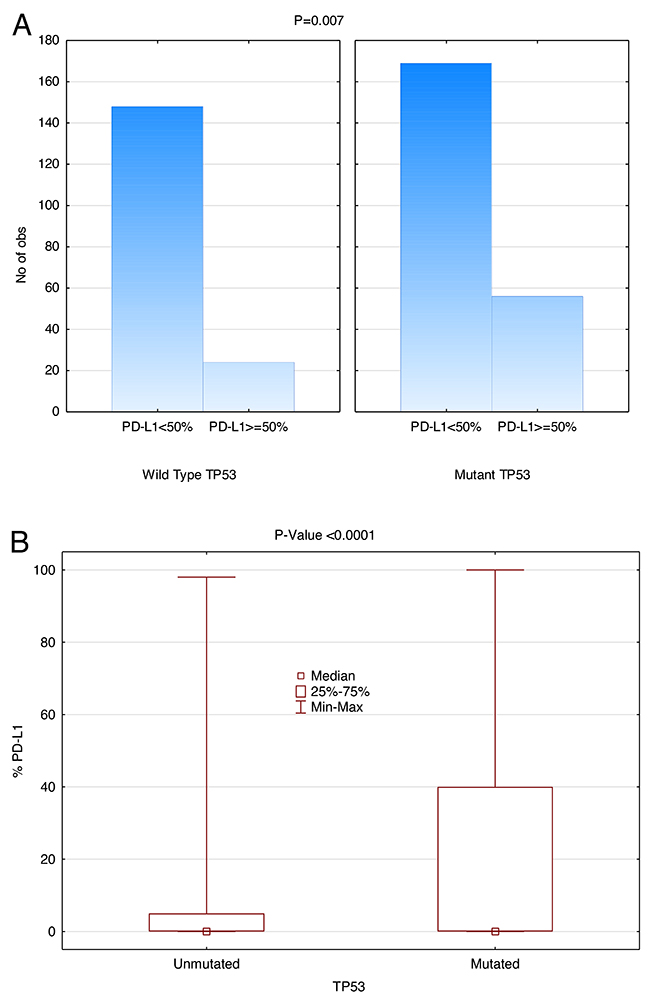 No correlation between KRAS mutation and PD-L1 expression

In this study we found that PD-L1 expressing EGFR WT NSCLC patients are statistically more likely to also overexpress MET than those who do not express PD-L1. Although measuring MET amplification in NSCLC is valuable for treatment decisions, it is difficult to quantify, with a limited number of putative MET-amplified patients. MET amplification occurs in approximately 2-4% of patients with lung adenocarcinoma, higher in other histologic types of lung cancer, and up to 22% of patients with acquired resistance to EGFR inhibition therapy [27–29]. We were able to establish that a cut-off point (CO) of 1.5% is appropriate for determining MET amplification, which compares favorably with earlier studies [29]. In our study, MET was amplified in 4.1% of NSCLC patients, and patients with MET amplification had significantly (P=0.004) more PD-L1 expression.

Our results indicate that EGFR mutation is inversely correlated with PD-L1 expression in NSCLC. EGFR WT patients included 23.5% that expressed high PD-L1, while EGFR mutated patients included only 4.4% that expressed high PD-L1. Some earlier studies also found this result: PD-L1 expression is higher in EGFR WT [30, 31]. Moreover, activation of the EGFR pathway has been shown to induce PD-L1 expression, [7, 32] while inhibition of EGFR has been shown to down-regulate expression of PD-L1 in EGFR mutated NSCLC cells, but not in the EGFR WT cells [12, 32]. This regulatory role of EGFR on PD-L1 expression, may explain the lack of PD-L1 expression by EGFR-mutant lung tumors and the lack of response rates reported for these patients [31]. Some previous studies reported the opposite findings: PD-L1 expression was higher in EGFR-mutant NSCLC [4, 11, 15, 33, 34]. Most of these studies included an EGFR-mutant patient cohort consisting predominately of patients who have received at least one cycle of EGFR tyrosine kinase inhibitor (TKI). This prior treatment may provide a rationale for the discrepancy, as a significant percentage of these patients may reasonably have acquired MET amplification after treatment, thereby driving PD-L1 expression secondarily. For EGFR WT patients, the relationship between MET amplification and PD-L1 expression may be critical for personalized cancer treatment that downregulates the RAS/MAPK pathway and where PD-L1 inhibitors are likely to be effective given the over-expression of PD-L1 seen in this patient population. A combination of MET targeting and checkpoint inhibitors may be particularly effective for EGFR WT patients, for whom other treatments are lacking.

The PD-1/PD-L1 pathway is a critical therapeutic target for advanced NSCLC, particularly in earlier disease settings. Although different anti-PD-L1 antibody clones are currently used in evaluating PD-L1 expression by immunohistochemistry (IHC), there is a concordance between antibodies for tumor cell scoring, but significant differences in the expression of PD-L1 and staining among 28-8, 22c3, SP142, and E1L3N, with SP142 producing the least stain [35, 36]. Various levels of PD-L1 expression have been noted in NSCLC studies depending on cut-off and clone [10]. Several investigators have suggested reporting both PD-L1 expression at any level in addition to expression ≥ 50% TPS by IHC staining [9]. However, the PD-L1 expression observed in this study using the SP142 clone was 41.8% (cut-off ≥ 1%) and 18.6% (cut-off ≥ 50%), and compares favorably with other studies that show similar results (e.g. 42.5% at any level and 18.4% with a PD-L1 expression level cut-off of ≥ 50%) [37, 38].

MET amplification drives constitutive activation of the RAF/MAPK pathway, as do KRAS and EGFR mutations. Not surprisingly, except for two patients in our study, all samples with KRAS mutation were EGFR WT. TP53 mutation, on the other hand, was correlated to both EGFR WT patient status and PD-L1 expression. Moreover, TP53 is more common in EGFR WT cases, and together these data point to TP53 being a driver of PD-L1 expression. In this study, EGFR mutant NSCLCs have significantly lower PD-L1 expression, but those without EGFR mutation have higher levels of PD-L1, TP53 mutation, and MET activation; patients with EGFR WT NSCLC who overexpress PD-L1 are statistically more likely to also overexpress MET and have mutated TP53.

Our data suggests that in NSCLC, both MET and TP53 genes play a direct role in up-regulating PD-L1 expression. TP53 mutation may play a role in metastasis early in the disease, suggesting patients without EGFR, ALK, or ROS1 mutations, but harboring a TP53 mutation, belong to a unique population subset that may benefit from combination therapy. Using PD-L1 or other immuno-oncology approaches in early stage NSCLCs, particularly those with TP53 mutations, may delay metastasis, and allow conventional treatment to be more effective. Additionally, combination therapy targeting MET with checkpoint inhibition or TP53 with checkpoint inhibition should be considered in treating EGFR WT, TP53 and/or MET amplified NSCLC.

In this retrospective study, tissue samples were collected from 471 patients with various tumors, including 397 lung cancers. The median age of the females was 66 and 68 for males (P=0.04). There were 389 patients with available data on both MET amplification and PD-L1 expression. NSCLC patients in this retrospective study had TP53 mutations (57%), KRAS mutations (46.7%), PD-L1 overexpression (41.8%), EGFR mutations (17.4%), and MET amplifications (4%). A summary of correlations uncovered in this study are summarized in Table 1. The present studies were reviewed and approved by the institutional review board and all were performed in accordance with relevant guidelines and regulations. The histological subtype of tumors was confirmed by a board-certified pathologist with expertise in thoracic malignancies.

*P-value after adjusting for multiple testing.

Formalin 7μm fixed paraffin embedded sections were examined by a US-certified pathologist for tumor content, and circled for each patient. One slide was used for FISH testing. Four to six consecutive sections were scrapped by a trained licensed clinical technologist for DNA extraction. Only samples with > 20% tumor were used for testing.

Lung cancer samples from 397 patients were also sequenced using next generation sequencing (NGS) for mutations in TP53, KRAS, and EGFR. DNA was sequenced using Illumina NGS protocols, including Illumina TruSeq library preparation, Illumina sample indexing, and Illumina synthesis by sequencing (SBS) protocols as recommended by the Illumina (San Diego, CA, USA). In brief, tumor DNA was amplified using either TruSeq kit or custom primers, and amplification products were confirmed with gel electrophoresis using a 2% agarose E-gel (Thermofisher, Carlsbad, CA, USA). Samples were indexed and pooled. Libraries were then loaded on to an Illumina MiSeq (Illumina, San Diego, CA, USA) or Nextseq Instrument for SBS using 150 bp Illumina sequencing kit with Illumina midoutput flow cells. An experiment sheet was generated using Illumina Experiment Manager for each sequencing run. MiSeq Reporter was used for alignment and variant calling using the proper panel bed/manifest file. Exons 2, 3, and 4 of KRAS were sequenced. For EGFR, we sequenced exons 3, 7, 15, and 18–21. Exons 1 and 3-7 of TP53 were sequenced. The primers for targeted sequencing covered approximately 50 nucleotides from each side of each exon. Sequencing and library quality were assessed for every run using MiSeq reporter, which calculates amplicon read coverage per sample and uniformity of coverage. Positive and negative control samples were also sequenced in parallel with each run to confirm the sensitivity and specificity of each run. Overall sequencing quality was also assessed with MiSeq Reporter software. The average sequencing coverage across the entire coding regions was 10,000 in 94% of the sequenced amplicons. Only clinically significant and biologically relevant mutations were considered. Mutations of unknown significance were not considered.

In this retrospective study, tissue sampled collected from 471 patients with various tumors, including 397 lung cancers, were tested for MET gene amplification by FISH by using a MET (7q31) probe and centromere 7 as a control (Agilent, Santa Clara, CA). Signals were quantified and ratios were calculated.

Standard statistical tests were used to evaluate correlations between variables including: Chi-square and Kruskal-Wallis test.

All funding was provided by NeoGenomics Laboratories.