Cancer is one of the major causes of death in the world and an estimated 12.7 million new cancer cases occur annually, of which approximately 271,000 is new cases of kidney cancer [1]. Renal cell carcinoma (RCC), accounting for 2%-3% of all adult malignancies, is the most common kidney malignancy [2]. In many countries, RCC is increasingly diagnosed at an early stage, however, nearly 50% of RCC patients die within 5 years after diagnosis [3]. Obesity, hypertension and smoking are known risk factors of RCC [4–10]. Increased BMI was reported to be associated with high RCC incidence [11–13] both in men and women [14], however, extreme obesity didn’t predict poor cancer outcomes after surgery in RCC patients [15], which indicated that the association between BMI and RCC prognosis is controversial. Therefore, we performed a meta-analysis to explore the relationship between BMI and RCC mortality as well as postoperative survival.

We conducted a literature search of PubMed and Embase database as well as hand-searching to 2017/07/30 for studies evaluating the effect of BMI on the risk of RCC mortality and postoperative survival. The studies were searched using the terms “BMI or body mass index or obesity or overweight” matched “mortality, prognostic or survival” and “renal cell cancer/carcinoma or kidney cancer/carcinoma”. And the publication language was restricted to English. We also searched the reference list of eligible articles. Only the most recent and informative one was included if several articles based on one data.

The criteria of studies included in this meta-analysis were set out as: (i) the exposure of interest should be BMI, weight, obesity or underweight; (ii) the outcome of interest should be mortality or postoperative survival; (iii) articles should report BMI categories and risk estimates with responding 95% CIs, or have sufficient information for us to calculate them.

All the articles were analyzed independently by two investigators. Data extracted by one and checked by two. And discrepancies were discussed by all investigators until consensus was reached. The following information were extracted from each articles included: the first author’s name, publication year, country, mean age or median age and the range, follow-up year, study size, number of cases (Table 1), BMI categories and hazard ratio or relative ratio estimates including 95% CIs and surgical method (Table 2). We extracted RR or HR estimates from multivariate for analysis which were adjusted by most complete confounding factors for studies.

Table 1: Characteristics of the 5 included articles on BMI and mortality of RCC 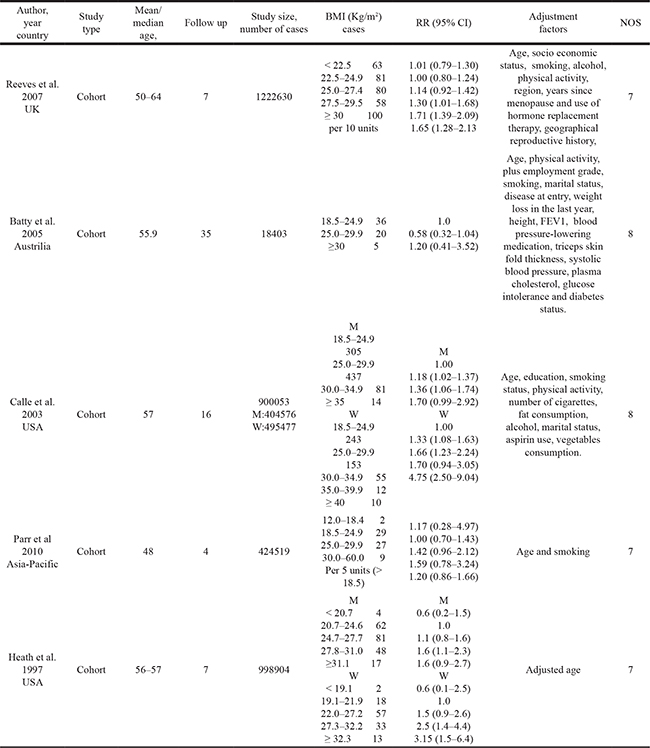 Table 2: Characteristics of the 14 articles on BMI and postoperative survival of RCC 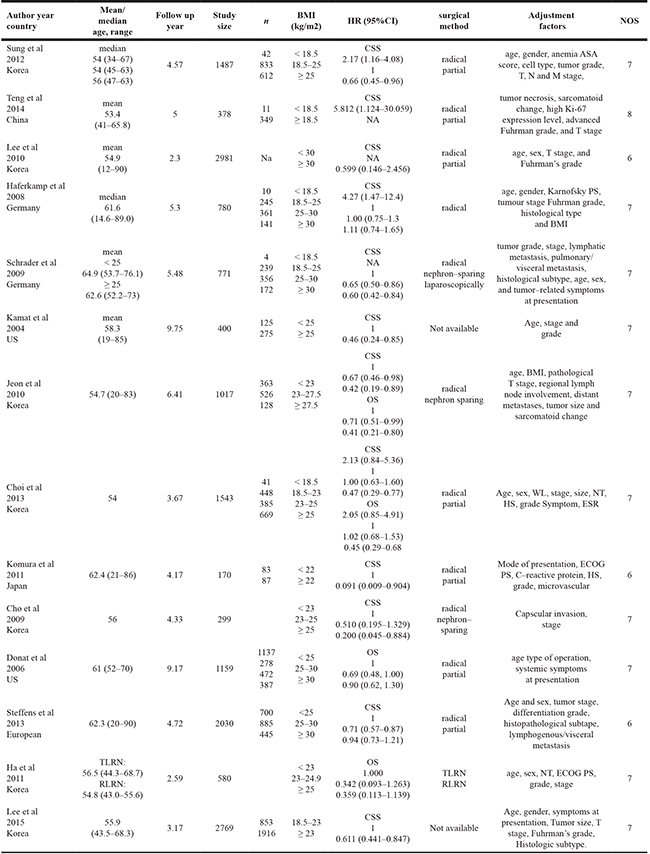 We assessed the methodological quality of the articles included rely on the Newcastle-Ottawa Scale Star (NOS) system [16]. It assesses study quality by 3 classifications including selection, comparability and outcome with a total score of 9 stars. Of these 9 stars, 4 represents for the appropriate selection of exposure and nonexposure cohort participants, 2 represents for the comparability of cohort, and the last 3 describes the assessment of outcome and follow-up. Articles were considered as high quality study if its’ quality score more than or equal to 5 stars.

For dose-response analysis, a two-staged random-effects dose-response meta-analysis [18] was performed to compute the trend from the correlated logHR estimates across levels of BMI, taking into account the between-study heterogeneity. Firstly, a restricted cubic spline model with three knots at percentiles 10, 50 and 90% of the distribution was estimated using generalized least-square regression taking into account the correlation within each set of published RRs/HRs. Then, the GLST command with the generalized least-squares regression was used to carry out the dose-response meta-analysis. The estimated RR/HR and their 95% CI were represented by solid line and the long dash line. Short dash line represents the liner relationship (per 1 kg/m² increment). And a p value for nonlinearity was calculated by testing the null hypothesis that the coefficient of the second spline was equal to zero [19]. And the evidence of publication bias was estimated by visual inspection of funnel plots using Egger’s regression test [20].

All the statistical analysis was performed by using Stata SE 12 for Windows (Stata Corporation, College Station, TX). And all p values were 2-sided. p < 0.05 was regarded as statistically significant.

5244 citations were identified from PUBMED and EMBASE, of which 243 duplicative ones were excluded after reviewed. Figure 1 showed the process of our study selection. As for the remaining 5001 citations, 4949 were excluded by scanning either the titles or abstracts. For the 52 remaining potentially related articles, full-text was reviewed in detail, of which 9 articles not relevant to RCC, 22 without sufficient data reported, 1 for surgery complications and 1 for intergenerational associations were excluded. Totally 19 articles were included for this meta-analysis, of which, 5 for RCC mortality [21–25], and 14 for RCC postoperative survival [26–39]. The follow-up intervals were from 4 to 35 years for RCC mortality, and 2.3 to 9.75 years for RCC postoperative survival. 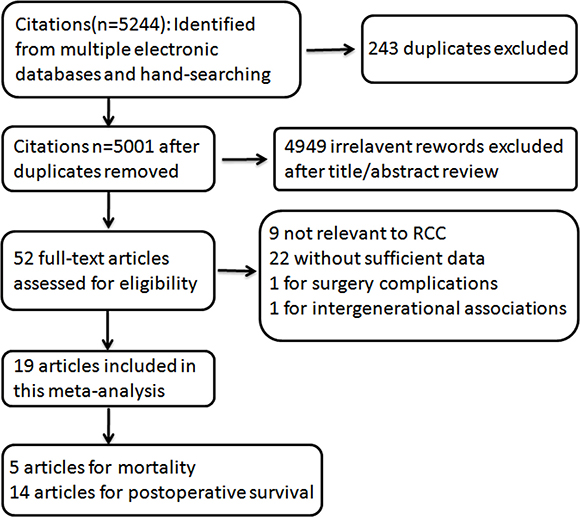 Figure 1: Flowchart of selection of studies for inclusion in this meta–analysis.

The main characteristics of the studies are shown in the Table 1 and Table 2. Newcastle-Ottawa Scale (NOS) was used to assess the quality score of these articles and all these included articles were above 6 stars (Tables 1 and 2).

BMI and mortality in RCC 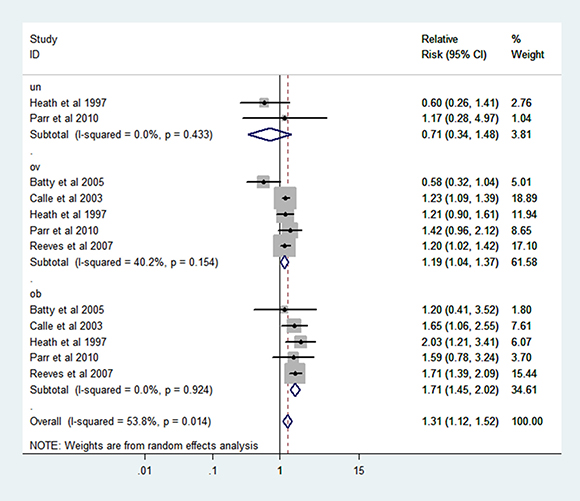 Figure 2: Forest plot of RR of abnormal VS normal weight for BMI with RCC mortality. 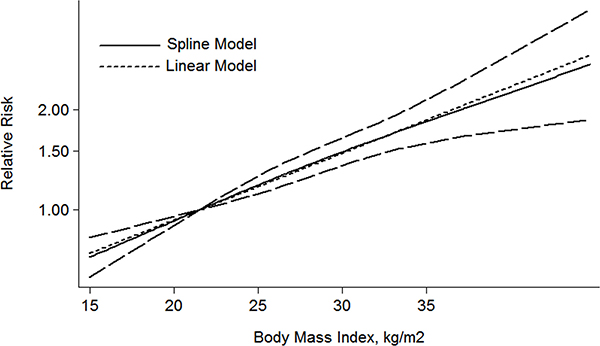 Figure 3: The dose-response analysis between BMI and RCC mortality in studies with restricted cubic spline in a multivariate random-effects dose-response model.

BMI and postoperative survival in RCC 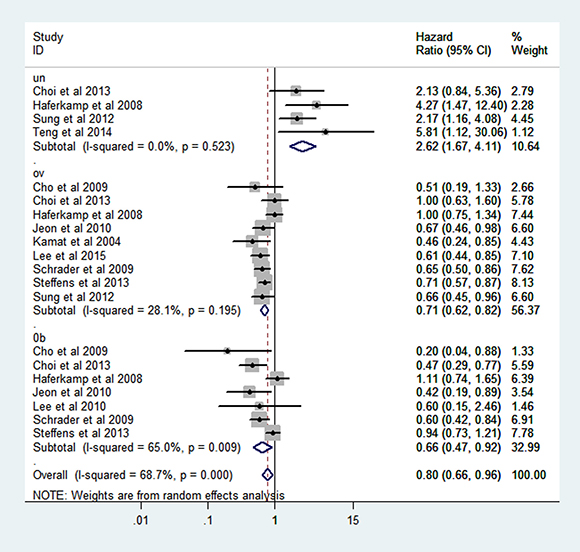 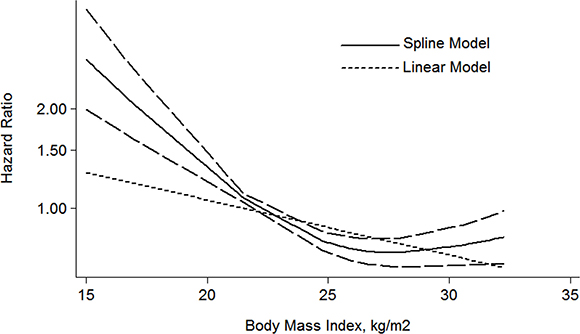 Figure 5: The dose-response analysis between BMI and RCC CSS in studies with restricted cubic spline in a multivariate random-effects dose-response model. 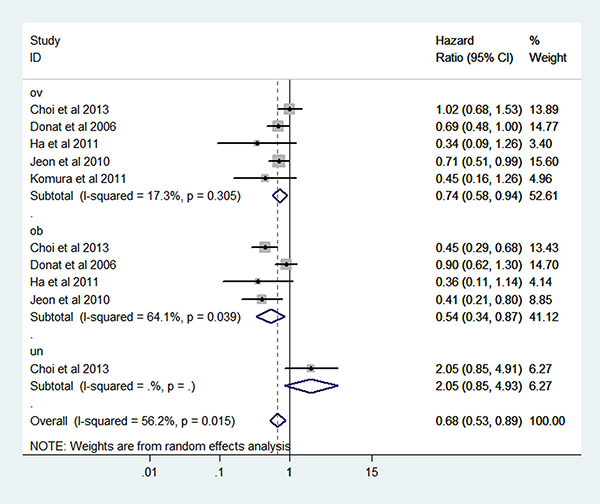 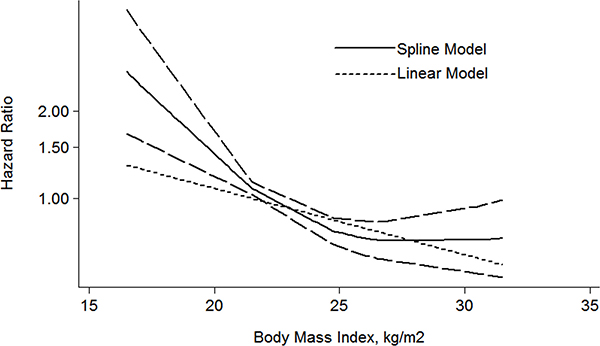 Figure 7: The dose-response analysis between BMI and RCC OS in studies with restricted cubic spline in a multivariate random-effects dose-response model.

Publication bias was assessed by using Egger regression test and Begg funnel plot. And there were no efficient evidence indicating publication bias on the relationship of BMI and RCC mortality and postoperative survival.

RCC mortality is the measure of deaths (in general, or due to a specific cause) in RCC population. The mechanism by which obesity may increase RCC mortality is not well studied [40], although mechanisms linking obesity with RCC incidence have been studied long time. Increasing prevalence of obesity is thought to contribute to the increasing incidence of RCC via several hormonal mechanisms including free estrogen [41], insulin and IGF-1 [42, 43], as well as physical damage mechanisms by lipid peroxidation, higher glomerular filtration rate and renal plasma flow [44, 45]. The RCC progression might share these mechanisms and develop fast in obesity RCC patients. In addition, increased BMI also increase the risk of other chronic disease including cardiovascular and stroke and thus increase the death risk.

On the other hand, it was reported that people without surgery-treatment have a significantly shorter survival time than surgical patients [31, 46, 47] indicating that surgery is a great factor for RCC postoperative survival. Obesity contributes to poor postoperative complications especially wound infection [48–53]. Yet, overweight and obesity might provide more sufficient nutritional reserve and metabolic state to overcome the stress of surgery. On the other hand, underweight are bad in energy use and metabolic excess, which fail to deal with the extreme stress of major surgery as well as remained tumor cells. And a molecular mechanism underlying this phenomenon may be that higher BMI associating with lower serum total adiponectin and thus may inhibit the remaining disseminated RCC cells [54].

There are some limitations in our meta-analysis. Firstly, abnormal weight was associated with unhealthy diet habit, but the studies included were almost not adjusted for it. Secondly, obesity tends to be accompanied with diabetes, which is also associated with RCC [56], but there is no sufficient information to analyze it. Thirdly, lacking of higher obese, such as obese class III, information limit us to evaluate the status of morbidly obese survival. Last, the association between BMI and RCC histological information were lacked which limit us to histological subgroup analysis.

In conclusion, our meta-analysis indicated that obesity may be associated with high risk of mortality in whole RCC patient but a better survival in surgery-treated RCC patients. Individualized weight control might be necessary for RCC patients.

The authors confirm that this article content has no conflicts of interest.