#These authors contributed equally to this work senior authors

Purpose: Human papillomavirus (HPV) is a causative agent for a rising number of head and neck squamous cell carcinomas (HNSCC), which are characterized by distinct tumor biology. Hypoxia inducible-factor (HIF) signaling influences initiation and progression of carcinogenesis and HPV oncoproteins have evolved to highjack cellular pathways for viral reproduction. Therefore, we investigated whether HPV activates HIF-1α expression in HNSCC.

Human Papillomavirus (HPV)-associated head and neck squamous cell carcinoma (HNSCC) are considered to be a distinct tumor entity with clinical, pathological and molecular features that essentially differ from HPV-negative HNSCC [1–3]. Oncogenic activity of the viral proteins E6 and E7 is crucial in HPV-driven carcinogenesis [4]. Viral oncoproteins interact with many pivotal cellular regulators to induce metabolic remodeling “optimized” for viral replication and nutrient synthesis [5]. Interestingly, HPV oncoproteins are able to stabilize HIF-1α in different cell lines [6–8]. The group of hypoxia-inducible factors (HIF), especially HIF-1 plays a major role in supporting tumor metabolism and in cellular adaptation to hypoxic stress [9]. HIF-1 is a heterodimeric transcription factor consisting of an O2-sensitive HIF-1α subunit and a constitutively expressed HIF-1β subunit. The stability of the HIF-α (HIF-1α and HIF-2α) subunits is regulated by oxygen sensors of the prolyl hydroxylase domain (PHD) protein family. PHDs use molecular oxygen to hydroxylate specific prolyl residues within HIF-α, which creates a binding site for the von Hippel-Lindau (VHL) tumor-suppressor protein. The VHL tumor-suppressor protein is part of an E3 ubiquitin ligase complex that promotes rapid HIF-degradation [10]. Three PHDs exist (PHD1, 2 and 3), hydroxylating HIF-α subunits with different preferences, but PHD2 is considered to be the main regulator of HIF-1α setting its low steady-state levels under normoxia [11, 12]. Under hypoxia PHD activity is inhibited and HIF is stabilized.

HIF-1 activates the transcription of numerous downstream genes, regulating processes required for tumor cell survival and progression, such as glucose metabolism, cell proliferation, erythropoiesis, invasion, angiogenesis and apoptosis [9, 13]. E.g. it could be shown that HIF-1α is able to promote tumor progression and to induce epithelial-mesenchymal transition (EMT) of tumor cells to facilitate metastasis. This is characterized by upregulation of transcription effectors (e.g. Snail, Twist, ZEB1 and ZEB2), suppressing E-Cadherin expression [14].

HPV-related HNSCC have favorable outcome compared to HPV-negative forms of the disease, particular after ionizing irradiation [15]. This might be due to a more efficient ionization of oxygen in radiation therapy because of higher pO2 in those tumors. Consequently, a differentially regulated metabolic machinery in HPV-related oropharyngeal cancers could be expected and HPV oncoproteins have been shown to play a role in regulation of the metabolic machinery [5, 16]. Further, HIF-1α is also a crucial metabolic regulator in cancer cells and hypoxia is known to be related to radioresistance. Therefore, we investigated the HIF pathway in HPV-positive and -negative cancer cell lines under normoxia and hypoxia, to provide new insights for potential therapeutic strategies for HPV-associated HNSCC.

Under normoxic conditions, HIF-1α is hydroxylated and rapidly degraded by the proteasome. Therefore, we analyzed its hydroxylated form after PHD inhibition with Dimethyloxalylglycine (DMOG) and blocking proteasomal degradation with MG-132 in two HPV-positive and two HPV-negative cell lines (Figure 3). Dual inhibition with DMOG and MG-132 shows the “steady-state” level of hydroxylated HIF-1α. Notably, both HPV-positive cell lines showed no detectable Hydroxy-HIF-1α protein levels under this condition, while in the HPV-negative HNSCC cells a strong Hydroxy-HIF-1α protein signal was observable. This is in line with the observed HIF-1α stabilization shown in Figure 1. After inhibition of proteasomal HIF-1α degradation, a strong Hydroxy-HIF-1α protein signal was obtained in the HPV-negative HNSCC cells. HPV-positive cell lines show less hydroxylation of HIF-1α indicated by a minor accumulation of protein reacting with Hydroxy- HIF-1α specific antibody.

In addition to low levels of oxygen, treatment with the iron chelating agent deferoxamine (DFO) was also able to induce HIF-1α . Therefore, we tested whether the HIF-1α levels are consistently inducible through DFO over time. On average, all four cell lines showed an increase of HIF-1α signal in response to DFO-treatment after 6 hours (Figure 4A). To visualize HIF-1α expression and localization in HNSCC cell lines, immunofluorescence staining was performed (Figure 4B). HIF-1α protein expression and nuclear localization was observed in the HPV-positive HNSCC cells under normoxic culture conditions by immunofluorescence microscopy. The HPV-negative tumor cells had only faint staining for HIF-1α under normoxic conditions. Remarkably, enhanced HIF-1α signal and nuclear localization after DFO-treatment was shown in the HPV-positive HNSCC cells compared to the HPV-negative tumor cells. 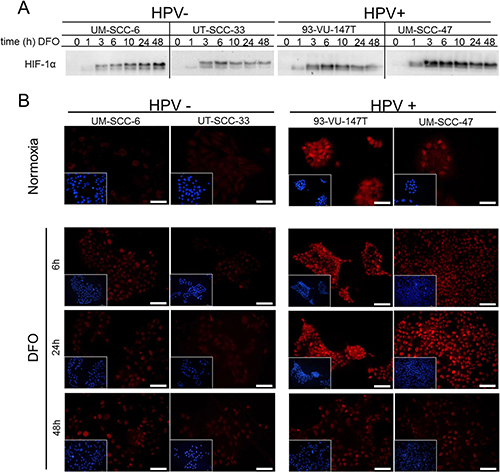 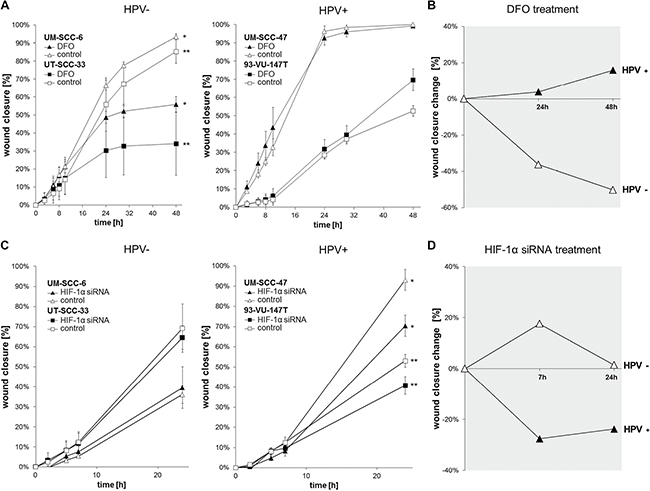 Under normoxia, all cell lines presented with a membranous staining pattern of E-cadherin (Figure 6). Under hypoxia pathway activation by DFO treatment, reduced membranous E-cadherin staining in HPV-positive compared to the HPV-negative tumor cells was observed.

For HNSCC, we showed significantly higher HIF-1α protein levels under normoxia in HPV-positive compared to HPV-negative cell lines. In cervical cancer cell lines and HPV-transfected human foreskin keratinocytes, stabilization of HIF-1α protein levels under normoxia was not reported [8]. In line with our results, HIF-1α protein accumulation under normoxic conditions was found in HPV16 E6 and E7 transfected cell lines. But it could not be shown that HPV16 E6 or E7 effects HIF-1α protein stabilization or mRNA levels, suggesting an altered regulation at the translational level in vitro [17, 18]. Data from clinical samples is contradictory. No association between HPV-status and HIF-1α was shown in Oral Squamous Cell Carcinoma (OSCC) [19, 20]. In line with our results, a significantly positive correlation between HIF-1α and HPV16 E7 labeling indexes in OSCC could be shown [21], suggesting a positive association between HIF-1α and HPV oncoprotein expression. Further, activated hypoxic signaling in HNSCC, especially in HPV-related tumors was suggested because of highly expressed hypoxia-associated proteins [22].

The main regulator of HIF-1α is PHD2. Hydroxylation of HIF-1α by PHD2 and further ubiquitination initiated by binding to VHL-protein causes proteasomal degradation under normoxia. Inhibition of PHD2, but not PHD1 or PHD3 by siRNA is sufficient to upregulate HIF-1α under normoxic conditions, which has been observed in various cancer and primary cell types [12]. We found differences between HPV-positive and -negative cell lines with respect to the regulation of HIF-1α and PHD2 under normoxia and elevated HIF-1α levels might be explained by HPV oncoprotein induced reduction of PHD2-activity. Recent data also suggested an inhibition of HIF-1α hydroxylation via binding of viral proteins to PHDs, preventing proteasomal degradation and resulting in HIF-1α stabilization in EBV-transformed B-cells [23]. In line with this, we observed a reduced steady-state level of HIF-1α hydroxylation in the HPV-positive cell lines by experimental inhibition of PHDs and the proteasome. In conclusion, reduced HIF-1a hydroxylation and degradation by HPV oncoprotein mediated PHD inhibition might explain the elevated HIF-1α protein levels under normoxia in our experiments.

Under hypoxia, we show upregulation of HIF-1α in all HNSCC cell lines, implying a functional hypoxia response pathway. However, the relative hypoxic expression signal and absolute protein increase was higher in the HPV-positive cell lines. Recently, it has been shown that HIF-1α protein accumulates in HPV-positive and -negative HNSCC cell lines under hypoxia [24], but no elevated accumulation of HIF-1α protein levels in the HPV-positive cell lines was detected under normoxic conditions [25]. In accordance with our investigations, earlier studies have shown HIF-1α stabilization by HPV under hypoxic conditions (chemically induced) in HPV E6/E7 oncoprotein transfected cells or cervical cell lines [6, 8, 26].

In line with established regulatory mechanisms [27–33], elevated HIF-1α levels in HPV-positive cell lines were associated with a significant increase of PHD2 levels under hypoxia in our study. We conclude that HPV oncoprotein induced HIF-1α activation under normoxic conditions occurs via inhibition of PHD2 activity and is further enhanced by decreasing oxygen supply.

To determine the functionality of HIF-1α in head and neck cancer cells, we investigated its cellular localization. Nuclear localization implies a functional HIF-1α protein that can activate its target genes [23]. In our study, a more intense fluorescence signal in HIF-1α positive stained nuclei from HPV-positive cell lines compared to HPV-negative cell lines was detected under normoxia. Additionally, an increase of nuclear HIF-1α accumulation under DFO treatment was observable. Both findings suggest a functional HIF-1α in HPV-associated HNSCC. HIF-1α activation could result in a ‘Warburg-like effect’ in HPV-related tumors under normoxia influencing tumor growth and improving cell survival [28]. In addition, HIF-1α can stimulate angiogenesis [33], which could contribute higher radiosensitivity [3, 15] due to improved oxygen supply in HPV-associated tumors.

Both HIF-1α suppression and overexpression highly influence the growth of hypoxic tumors [34–36]. We found different adaptive proliferation and migration abilities under hypoxia pathway activation and HIF-1α inhibition by siRNA in the investigated cell lines, indicating high hypoxic adaptation in the HPV-positive cell lines. This is in concordance with the highly induced HIF-1α levels in those cell lines.

Additionally, we found degradation and a loss of membranous E-cadherin after DFO-treatment in the HPV-positive cell lines. Promoted proliferation, migration and invasion is most likely due to impaired-cadherin mediated cell-cell adhesion or E-cadherin ectodomain shedding [37, 38]. Thus, our results are compatible with HIF-1α mediated E-cadherin shedding in HPV-positive cell lines, which could activate EMT [14, 39]. This and suppressed expression of E-Cadherin might explain the metastasizing phenotype in HPV-associated HNSCC [40].

In conclusion, the impaired HIF-1α hydroxylation and increased HIF-1α levels in HPV-positive HNSCC cell lines we observed could be clinically relevant for those patients with tumors of high metastasizing potential. Re-establishing of HIF-1α degradation by interfering with the HPV-HIF-1α interaction might suppress tumor growth and metastasis.

Migration- and proliferation potential was determined in “scratch” (wound healing) assays. Cells were seeded in 3.5 or 6 cm petri dishes. After reaching 100% confluence, a cross-shaped “scratch” was created using a 10 μl pipette tip. Detached cells were removed by washing tree times with 1xPBS. Cells were cultured in RPMI1640 for 48 hours with or without 150 μM DFO or 10 nM HIF-1α siRNA (s6541, Thermo Fisher Scientific Inc., Waltham, MA USA 02451). Images were taken with an inverse microscope (Leica DMI3000B, Leica Microsystems, Wetzlar, Germany) at time points: 0, 3, 6, 8, 10, 24 and 48 h under DFO treatment or 0, 2, 5, 7, 24 h under siRNA treatment after scratching. Analysis of the wound healing area was done with image processing program (ImageJ 1.49). Each experiment was done three times and six images or three in the case of siRNA experiments were analyzed for each time point.

Under normoxic conditions HIF-1α is usually hydroxylated and degraded very fast by the proteasome, therefore we assayed its hydroxylated form after inhibition of PHDs with Dimethyloxalylglycine (DMOG) (1.5 mM) and blocking proteasomal degradation with MG-132 (40 μM). Cells were grown in 3.5 cm petri dishes until reaching 60–70% confluences. After replacing the culture medium, cells were cultured for 10 hours with the membrane-permeable proteasome inhibitor MG-132 and DMOG, both from Sigma-Aldrich, St. Louis, USA. Protein extraction and western blotting was performed as described above. Untreated cells were used as control.

The authors wish to thank Maike Roth for her excellent technical assistance.

The authors state they have no known conflicts of interest in this work.

38. Reiss K, Ludwig A, Saftig P. Breaking up the tie: disintegrin-like metalloproteinases as regulators of cell migration in inflammation and invasion. Pharmacol Ther. 2006; 111:985–1006.