Preoperative chemoradiotherapy (PCRT) is currently recommended as the standard treatment for locally advanced rectal cancer [1-3]. It is known to decrease local recurrence rates without increasing treatment-associated toxicity compared to postoperative adjuvant chemoradiotherapy [4-7]. In addition, PCRT has been reported to improve sphincter preservation in several studies [2, 5-7], and the introduction of PCRT has led to the greater possibility of sphincter preservation, especially in lower rectal cancer patients.

Many patients with rectal cancer wish to undergo sphincter-preserving surgery (SPS) to preserve quality of life. However, following SPS, defecation disorders such as frequent defecation, urgency, clustering, and fecal incontinence can occur, and cooperation of the rectum and anus is impaired. Therefore, anorectal function is compromised and quality of life is affected [8-11]. It is known that the possibility of SPS increases after PCRT, but there are conflicting opinions over whether SPS after PCRT causes more severe anorectal dysfunction than SPS. Previous studies have reported that patients with SPS after PCRT can develop fecal incontinence [3] due to anorectal functional deterioration [1, 3, 12-14] more frequently than patients who underwent surgery alone, and that PCRT causes damage to the anal sphincter and pudendal nerve [15].

With the above in mind, the objective of the present study was to exclude the effect of SPS in assessing the influence of PCRT on anorectal function by comparing changes after PCRT using anorectal manometry. 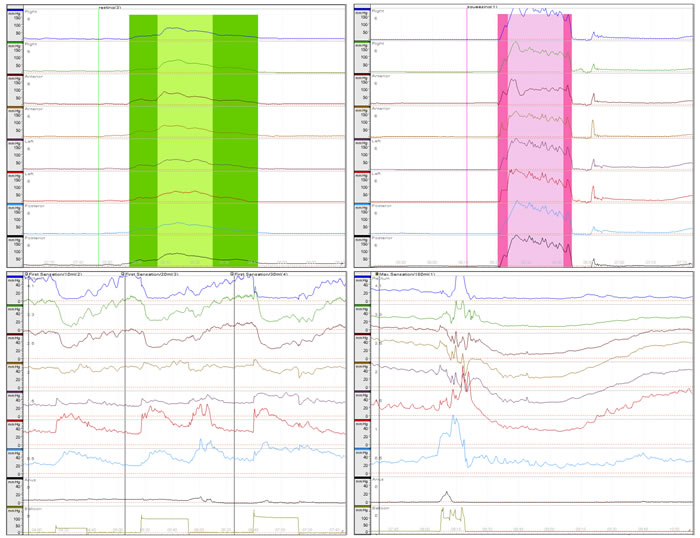 Changes in clinical characteristics between before and after PCRT

Table 2: Clinical characteristics between before and after PCRT

Changes in manometric parameters between before and after PCRT

Table 3: Comparison of manometric parameters between before and after PCRT according to tumor characteristics

Table 4: Comparison of the differences in manometric parameters between before and after PCRT according to tumor response to PCRT

The present study compared the results from before and after PCRT with the objective of assessing the direct influence of PCRT on anorectal function, for which changes in manometric parameters were observed as comparisons of objective indices. In addition, subgroup analysis was conducted to examine whether anorectal function is affected by changes in the clinical features of tumors after PCRT. According to the findings of the present study, anorectal manometry after PCRT revealed significant increases in SL and MRP and decreases in MTV.

With respect to anorectal function after PCRT based on cT stages, significant increases in SL (p < 0.001) and MRP (p < 0.001) and significant decreases in MTV (p = 0.048) were found after PCRT in cT3 rectal cancer cases. However, there were no significant differences in anorectal function after PCRT in cT4 rectal cancer cases. It is believed that such differences may be attributable to the difference in sample size between cT3 (n = 281, 90.6%) and cT4 (n = 29, 9.4%) cases. However, some studies reported that tumor response to PCRT becomes worse in high cT stages [23-25]. Therefore, the possibility of changes in anorectal function based on cT stage being caused by such differences in responsiveness can also be suspected. In fact, among the participants in the present study, total regression was found in 45.2% of cT3 patients, which was higher than the 31.0% noted in cT4 patients. However, because of the difference in sample size between cT3 and cT4 rectal cancer cases, additional studies are needed to generalize the findings.

The changes in the distance of the tumor from the AV and cT stages after PCRT can be used as indirect indicators of tumor response to PCRT. The present study examined whether differences in tumor response to PCRT can cause changes in anorectal function based on indirect indicators. In patients who showed increased distance from the AV to the tumor after PCRT, there were significant increases in MSV and MTV, whereas in patients who showed no change or a decrease in the distance from the AV to the tumor, MSV and MTV decreased after PCRT. The former may be attributed to a decrease in tumor size. In the present study, there was no significant difference in anorectal function after PCRT based on changes in cT stage. Contrary to the findings in the present study, Kye et al. [19] showed significant increases in the length of the high pressure zone (HPZ) and urgent volume in down-staging of cT stage after PCRT. They claimed that such results were not attributable to improved rectal sensation, such as urgent volume, after PCRT in rectal cancer patients with down-staging cT stage, but rather due to exacerbation after PCRT in rectal cancer cases that did not show down-staging of cT stage. Due to the lack of accuracy in the evaluation of cT staging, it is believed that differences between studies may arise from difficulties in assessing actual responses to radiation by changes in cT stages.

We retrospectively reviewed 310 patients with locally advanced rectal cancer who underwent PCRT from January 2012 to May 2015 at Asan Medical Center. The participants were patients who had undergone anorectal manometry before and after PCRT and met the follow inclusion criteria: definitive diagnosis of adenocarcinoma from a biopsy, the tumor was located within 8 cm from the AV, and the tumor invasion level was T3-T4 or lymph-node metastasis was suspected on MRI. Tumor distance from the AV was measured using the curvilinear measurement on MRI by drawing multiple linear lines along the approximate luminal center of the rectum and the anus on the midline sagittal plane as recommended by a national recommendation. We excluded patients who were diagnosed with distant metastasis, had a history of radiotherapy or chemotherapy, could not complete PCRT, and were not available for anorectal manometry before and after PCRT. Rectal cancer was classified as either lower or mid rectal depending on the tumor being located ≤ 5 cm or > 5 cm to ≤ 8 cm from the AV, respectively. Patients received radiotherapy with 1.8-2.0 Gy per fraction at a total dose of 50-50.4 Gy in 25~28 fractions using a 3 or 4-field technique. Concurrent chemotherapy was provided with an intravenous bolus of 5-FU and LV for 3 d after the beginning of radiotherapy and for 3 d before the end of radiotherapy, or with oral capecitabine twice daily during the treatment period.

This study was approved by the Institutional Review Board of the Asan Medical Center (authorization number 2016-0245).

Anorectal manometry was performed before PCRT and 4-8 weeks (mean, 5.96 ± 0.95 weeks) after the completion of PCRT. A hydraulic capillary infusion system (Polygraf ID, Medtronic, Denmark) was used with the pull-through technique, and the perfusion catheter was an 8-channel polyethylene flexible catheter with an outer diameter of 5.5 mm and a total length of 150 cm. A radial perfusion catheter was inserted so that the channel of the catheter would be positioned 6 cm from the AV. Subsequently, the SL, HPZ, MRP, and anal sphincter symmetry index (ASI) were measured while retracting with an automatic puller for 1 min at a constant rate of 1 mm/sec. After three repeated measurements under stable conditions, the catheter was reinserted and MSP was measured while squeezing the anal sphincter as much as possible in the HPZ while the catheter was being retracted continuously. A spiral perfusion catheter with a latex balloon attached at its end was inserted so that the #8 channel would be positioned on the AV. Subsequently, MSV, urgent volume, and MTV were measured as the latex balloon was inflated with a syringe, while at the same time checking for RAIR. The system-embedded software program (Polygram, USA) calculated SL, length of HPZ, MRP, MSP, ASI, and rectal pressure based on the measured pressure values, while rectal compliance was calculated based on the volume of the inflated air and rectal pressure (Figure 1). Anorectal manometry was performed by two nurses with more than 10,000 cases of experience with this procedure.

In Ja Park and Jeong Hye Kim: study design, data collection, and confirmation of the manuscript.