c-Myc is a key oncogenic transcription factor that participates in tumor pathogenesis. In this study, we found that levels of c-Myc mRNA and protein were higher in early ovarian cancer tissues than normal ovary samples. Increased c-Myc levels correlated positively with clinical stage I (Ia+b/Ic) in ovarian cancer patients. Patients with higher nuclear c-Myc expression had shorter overall survival times than patients with low c-Myc expression. Knocking down c-Myc sensitized ovarian cancer cells to 7-difluoromethoxyl-5,4’-di-n-octylgenistein (DFOG), a novel synthetic genistein analogue that suppressed PI3K/AKT signaling in vitro and in vivo. Finally, c-Myc was confirmed to be a direct target of let-7d, and let-7d-induced suppression of c-Myc increased the DFOG-sensitivity of ovarian cancer cells. These results indicate that nuclear c-Myc expression is an unfavorable factor in early ovarian cancer, and that let-7d increases ovarian cancer cell sensitivity to DFOG by suppressing c-Myc and PI3K/AKT signaling.

Ovarian cancer accounts for only about 3% of female malignancies, but causes more deaths than any other reproductive system cancer. The pathogenesis of ovarian cancer is complex and driven by dysregulation and aberrant activity of a variety of genes and signaling pathways [1, 2]. c-Myc encodes an oncogenic transcription factor that promotes cellular proliferation, migration, invasion, differentiation, and tumor stemness. It is a significant contributor to tumor pathogenesis, and elevated c-Myc expression is an unfavorable factor in many tumor types, including gastric [3], colorectal [4], prostate [5], breast [6], and ovarian [7].

Let-7 family miRNAs, including let-7d, reportedly suppress tumor pathogenesis [14-16]. On the other hand, Let-7d has been observed to contribute to the pathogenesis of some tumors. For example, Di et al observed that let-7d exerts both anti-oncogenic and oncogenic effects in osteosarcoma-derived 3AB-OS cancer stem cells [17]. In addition, let-7d reportedly directly targets HMGA2 [18], COL3A1, CCL7 and PBX3 [19-23], and thus suppresses tumor cell growth, migration, invasion, and metastasis. In this report, we describe our finding that elevated c-Myc is an unfavorable factor which promotes ovarian cancer pathogenesis, and that suppression of c-Myc by let-7d markedly sensitizes cancer cells to DFOG by downregulating the PI3K/AKT pathway. 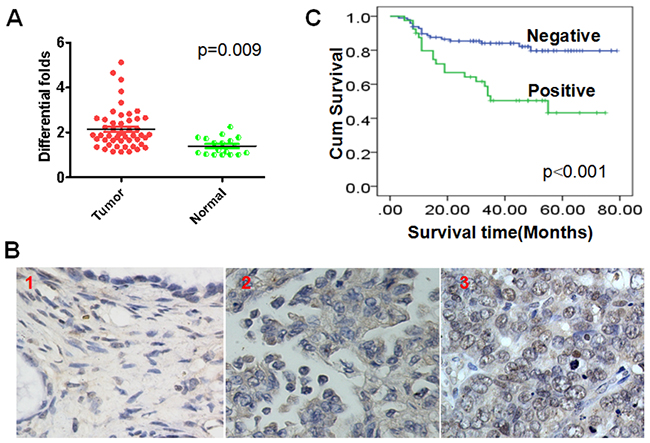 Table 2: The correlation of Nuclear expression of c-Myc with clinical features in ovarian cancer 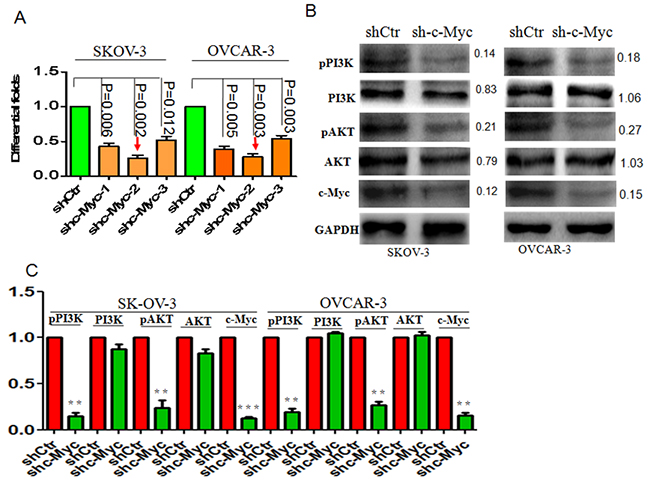 DFOG is a novel synthetic genistein analogue that exerts anti-ovarian cancer effects by suppressing tumor stemness [8-10]. In the present study, we observed that knocking down c-Myc greatly sensitized ovarian cancer cells to DFOG. The IC50 of shMyc-expressing SKOV3 and OVCAR3 cells was significantly lower than that of their respective control parental lines (SKOV3: 1.12 ± 0.06μm vs 6.11 ± 0.20μm, p=0.003; OVCAR3: 1.56 ± 0.09μm vs 5.75 ± 0.29μm, p<0.001) (Figure 3A). This sensitizing effect was then examined in vivo with tumors originating from inoculated SKOV3 cells. Survival times for SKOV3 cell tumor-bearing nude mice were prolonged by DFOG treatment. Also exhibiting longer survival times were mice inoculated with c-Myc knockdown cells. And mice administered both c-Myc knockdown cells and DFOG treatment had the longest survival times (Figure 3B) (P<0.001). The average survival times for mice in control, shMyc, control+DFOG and shMyc+DFOG groups were 25.1, 34, 32.1 and 45.6 days, respectively. 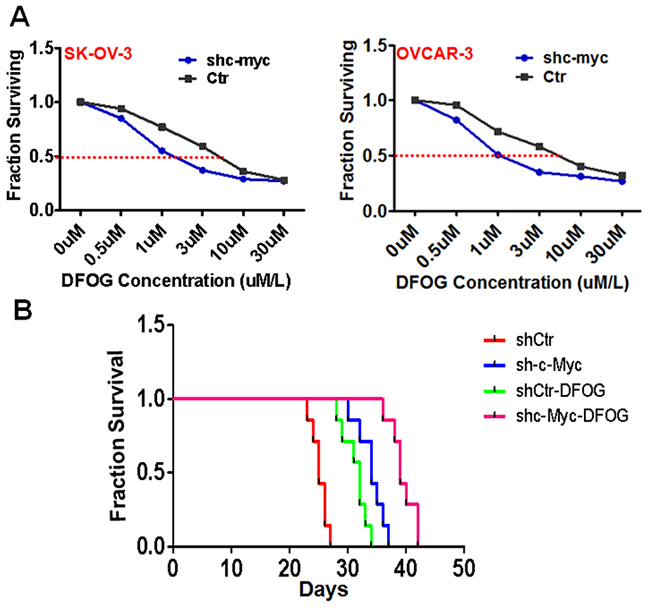 Using DFOG to treat ovarian cells, we observed that levels of pPI3K/AKT pathway components were significantly reduced in parental SKOV3 and OVCAR cells. In addition, c-Myc was downregulated after DFOG treatment (Figure 4A, 4B). 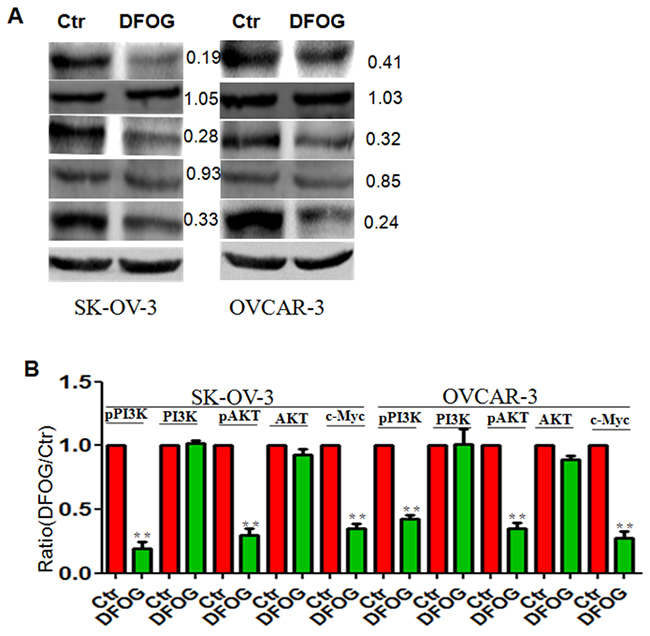 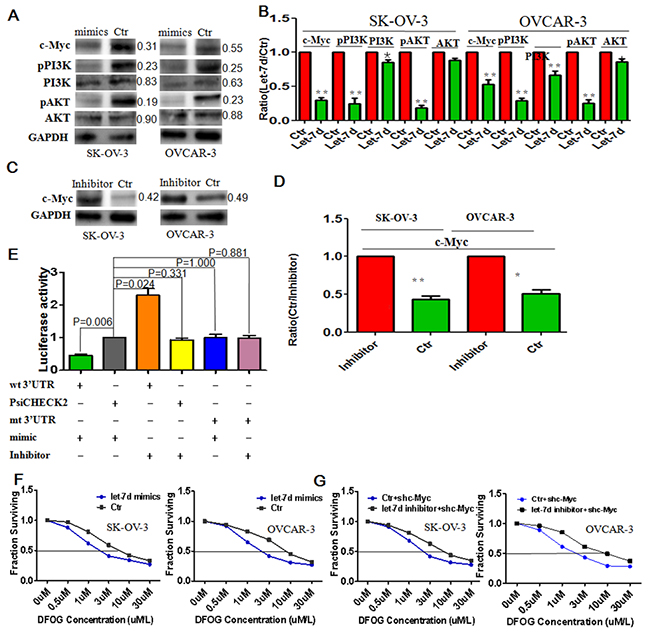 Let-7d is downregulated and negatively correlates with c-Myc expression

c-Myc is a conserved basic helix-loop-helix (HLH) leucine zipper transcription factor that induces cell growth, tumorigenesis, and tumor stemness. In the present study, we firstly observed higher c-Myc mRNA expression in ovarian cancer samples than normal ovarian tissues. This is consistent with an earlier report [7] and is indicative of the importance of c-Myc overexpression in the context of ovarian cancer.

c-Myc activity reportedly leads to dysregulation of numerous genes and thus promotes tumor initiation and progression [24, 25]. When we assessed the differential expression of c-Myc in stage I ovarian cancer and normal ovarian tissue, we found that nuclear expression of c-Myc was markedly higher in the cancer tissue. The finding is consistent with Zeng’s observation in prostate cancer [5], and further suggests that c-Myc participates in ovarian carcinogenesis. We also observed that although increased c-Myc did not correlate with age, pathology classification, or grade degree, it was positively related to clinical stage (Ia+b vs. Ic). This suggests upregulated c-Myc is also involved in early ovarian cancer progression.

Genistein, 5,7,4’-trihydroxylisoflavone, is a major component of soybean products and reportedly possesses anticancer activities. DFOG is a novel synthetic genistein derivative. We recently reported that DFOG suppresses cell growth and tumor stemness, and that it induces cell apoptosis by suppressing FOXM1 and upregulating FOXO3a in ovarian cancer [11-13]. c-Myc promotes chemotherapeutic resistance in tumors, including ovarian cancer [26-30]. Thus, suppression of c-Myc may be a way to elevate the sensitivity of tumor cells to drugs. Interestingly, we observed that knocking down c-Myc not only markedly elevated ovarian cell sensitivity to DFOG in vitro, but also greatly increased the survival time of tumor-bearing mice.

PI3K/AKT is a classical oncogenic signaling pathway, which promotes tumor pathogenesis and induces chemotherapy resistance [31-33]. Yu et al. observed that endoplasmic reticulum stress promotes autophagy and apoptosis and reverses chemoresistance of human small cell lung cancer cells by inhibiting the PI3K/AKT/mTOR signal. Zhao et al. found that miR-181c inhibits chemoresistance by suppressing PI3K/AKT in chronic myelocytic leukemia [34, 35]. In the present study, we observed that knocking down c-Myc expression led to reductions in PI3K/AKT signaling in ovarian cancer cells. This is in contrast to Kaur’s report that c-Myc suppresses PI3K/AKT signal in normal cells [36]. However, that observation has not been documented in the context of carcinogenesis and may reflect an inherent difference between normal and malignant cells. Similar to the effect of c-Myc knockdown, we found that DFOG treatment suppressed PI3K/AKT signaling, but also suppressed c-Myc expression. These results provide evidence that c-Myc suppression sensitizes ovarian cells to DFOG treatment.

Let-7d reportedly acts as a tumor suppressor participating in the pathogenesis of some tumors, including ovarian cancer. In previous documents, Let-7 (let-7b/c) contributed to HuR-mediated repression of c-Myc expression [37]. In the present study, we found that let-7d directly targets c-Myc and induced PI3K/AKT signaling to increase the DFOG sensitivity of ovarian cancer cells. We also observed that let-7d expression correlated negatively with c-Myc mRNA expression in ovarian cancers. These data demonstrate the importance of the let-7d/c-Myc signal in ovarian cancer.

In summary, our study has demonstrated that c-Myc mRNA levels are significantly elevated in ovarian cancer tissues. c-Myc expression correlates positively with clinical progression and is predictive of a poor prognosis in stage I ovarian cancer patients. Our data also demonstrate that c-Myc suppression sensitizes ovarian cancer cells to DFOG by inactivating PI3K/AKT signaling. Finally, c-Myc is a direct target of the tumor suppressor let-7d, and its suppression is associated with let-7d-mediated increases in DFOG-sensitivity in ovarian cancer.

Thirty-microgram aliquots of protein were subjected to 10% SDS-PAGE, after which the separated proteins were transferred to PVDF membranes. The membranes were then incubated first for 1-2 h in blocking solution, then for 1 h with the following primary antibodies: rabbit polyclonal c-Myc, PI3K, pPI3K, AKT, pAKT, and GAPDH (Cell Signaling Technology, Danvers, USA). An HRP-conjugated anti-rabbit IgG antibody was used as the secondary antibody (Zhongshan, Beijing, China). Signals were developed using enhanced chemiluminescence reagents (Pierce, Rockford, IL).

shc-Myc SKOV3 and OVCAR ovarian cancer cells and their respective control cells were seeded into 96-well plates to a density of 5×103 cells/well and then incubated in 100 μl DMEM supplemented with 10% FBS. Once the cells attached, 0, 0.5, 1, 3,10, or 30 μM DFOG was added to the wells, which were then incubated for 48 h at 37°C under 5% CO2. Thereafter, 10 μl of MTT (5 mg/ml) (Sigma, St. Louis, MO, USA) were added to each well, and plates were incubated for an additional 4 h at 37°C. The supernatants were then removed, and 100 μl of DMSO (Sigma) were added to each well. The optical density (OD) of each well at 490 nm was then measured. The calculated rates were then used for curve fitting and for calculating the half-maximal inhibitory concentration (IC50). Experiments were repeated three times.

In vivo experiments in nude mice

In vivo experiments were approved by the Animal Care and Use Committee of Guangzhou Medical University. All mice were provided by the Central Animal Facility of Guangzhou Medical University at 4 weeks of age. Nude mice (BALB/C, nu/nu) were injected intraperitoneally with approximately 6×105 c-Myc-silenced SKOV3 cells or control cells in 0.2 mL of buffered saline. Tumors were allowed to grow for 3 days, after which the animals were randomized into four groups (shCtr; shMyc; shCtr+DFOG; shMyc+DFOG), which were administered normal saline (NS) or DFOG (10 mg/kg) every 4 days. Survival was calculated using Kaplan Meier analysis.

Transfection with let-7d mimics and its inhibitor

let-7d mimic and its inhibitor were purchased from Guangzhou RiboBio (RiboBio Inc, China). Ovarian cancer cells were seeded into a 6-well or 96-well plate (Nest, Biotech, China) to 40% confluence. After incubation for 24 h, the cells were transfected with let-7d mimics or its inhibitor using TurboFectTM siRNA Transfection.

Based on analysis using miRwalk software (University of Heidelberg, Mannheim, Germany), c-Myc was predicted to be a direct target of let-7d. A 256-base fragment of the wild-type c-Myc 3’UTR with a let-7d binding site was amplified and then cloned into psiCHECK-2 vector (WT) containing XhoI and NotI restriction enzyme sites. Site-directed mutagenesis of the let-7d binding site in c-Myc 3’UTR was performed using a GeneTailor System (Invitrogen), and its cloning into psiCHECK-2 yielded the mutant-type vector MT. For reporter assays, WT, MT or control psiCHECK-2 vector were cotransfected into ovarian cancer cells with let-7d mimics or inhibitor. Luciferase activity was measured 48 h after transfection using a Dual-Luciferase Reporter Assay System (Promega Corporation, Madison, WI, USA).

All data were analyzed for statistical significance using SPSS 13.0 software and presented as the mean ± SD. Values of P < 0.05 were considered statistically significant. Student’s t-test was applied to examine differences in c-Myc mRNA expression between normal and ovarian cancer tissues. One-way ANOVA was used to determine the differences in between groups in all in vitro analyses.

YXN, MX, XF, and XL carried out all the experiments. JW and XL participated the study design. JW interpreted the data, drafted the manuscript and gave final approval of the manuscript.