*Indicates equal contribution in this study compared with the first author

Background: Vascular cognitive impairment (VCI) is a spectrum of cognitive impairment caused by various chronic diseases including aging, hypertension, and diabetes mellitus. Oxidative and inflammatory reactions induced by chronic cerebral hypoperfusion (CHP) are believed to cause VCI. Melatonin is reported to possess anti-oxidation and anti-inflammation effects. This study was designed to investigate the effect and mechanisms of melatonin in CHP mice model.

Results: The behavioral function results revealed that CHP mice were significantly impaired when compared with the control. Melatonin improved the cognitive function, but the addition of MT2 receptor antagonist reversed the improvement. The IHC staining showed melatonin significantly improved WM lesions and gliosis in CHP mice. Again, the addition of MT2 receptor antagonist to melatonin worsened the WM lesion and gliosis. Similar results were also found for mRNA and protein expressions of oxidative reaction and inflammatory cytokines.

Vascular cognitive impairment (VCI) is the secondary cause of dementia in the world [1–3]. VCI increases the morbidity, disability, and health care costs in the growing elderly population, and decreases the quality of life and survival rate of patients despite aggressive therapy [1–8]. Aging, chronic hypertension, and diabetes mellitus have been reported associations with the onset of VCI, which is characterized by white matter (WM) lesions [9–11]. These vascular risk factors result in vascular remodeling, which then lead to chronic cerebral hypoperfusion (CHP). CHP, a consequence of chronic hypertension, diabetes mellitus and aging, is a critical factor that leads to the onset of VCI [9–11]. Characterized by blood-brain barrier (BBB) disruption, WM lesions, damage of oligodendrocytes, activated gliosis and cognitive dysfunction, CHP triggers off oxidative reactions and inflammatory processes, resulting in white matter (WM) damage [12–14].

Melatonin is synthesized primarily in the pineal gland, and is involved with the circadian rhythm [15–17]. Several of its actions are mediated via two G-protein-coupled membrane receptors called MT1 and MT2. [15–17] Additionally, melatonin has been shown to be a powerful antioxidant with multifaceted protective capacities against oxidative stress and the organ dysfunction from the enhancement of reactive oxygen species (ROS) generation [15–19]. Previous studies have shown that melatonin therapy remarkably reduces the generation of ROS as well as oxidative stress in animal models of ischemia-reperfusion injury [18, 19]. Based on the anti-oxidative and inflammatory effects of melatonin, the use of melatonin can be projected to offer benefits for CHP-induced vascular-impaired dementia (VID). However, it is unclear whether these effects are caused solely by melatonin, or also partially by the activation of the melatonin MT2 receptor [20–23]. This study was designed to test whether or not melatonin attenuates CHP induced brain damage and MT2 receptors take part in the aforementioned process. 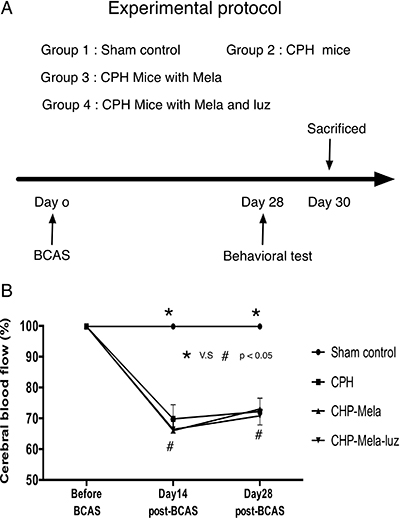 As shown in Figure 2, the Y maze (spontaneous alternation) was performed to discriminate the working memories between the 4 groups. In regards to CHP mice, group 2 showed a significant impairment in comparison with group 1 (P < 0.05). Treatment with melatonin (group 3) significantly improved the spatial working memory when compared with those without additional treatment. However, the positive effect of melatonin was lessened when the MT2 receptor antagonist was added to melatonin (group 4). There was no significant difference between four groups in numbers of arm entries.

Effects of melatonin on WM Lesions, and glial activation in CHP Mice

The severity grade of WM lesion of the corpus callosum was significantly higher in group 2 when compared with that in group 1. The WM lesion was found significantly reduced when melatonin was offered (group 3). However, the addition of MT2 receptor antagonist to melatonin worsened the WM lesion in group 4 mice (Figure 3C). 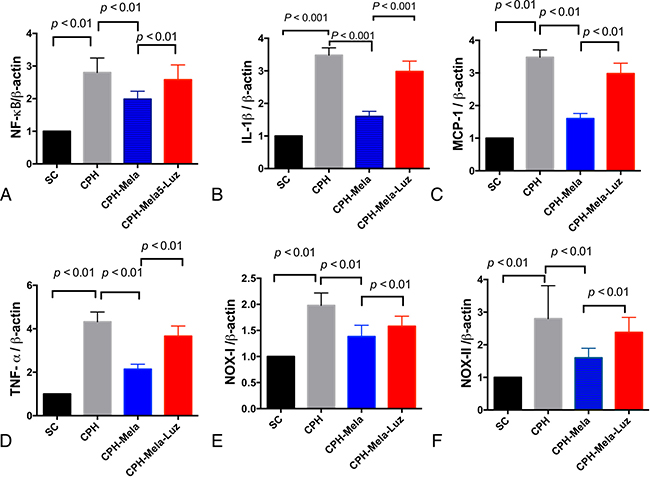 As shown in (Figure 5A–5D), the protein expressions of oxidation markers such as NOX-I and NOX-II induced by CHP were significantly reduced when melatonin was provided. However, this anti-oxidation protective effect of melatonin was reversed when MT2 receptor antagonist was added. The γ-H2A is a marker of DNA damage, which helps to represent the condition of brain damage. The protein expressions of γ-H2A were significantly increased in CHP mice. The addition of MT2 receptor antagonist to melatonin raised the expression of γ-H2A again. 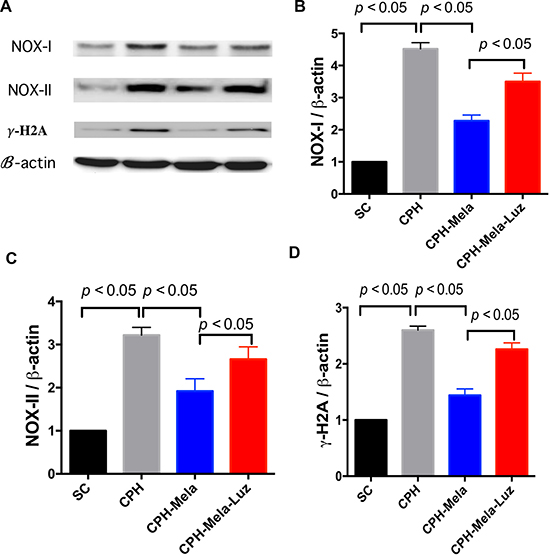 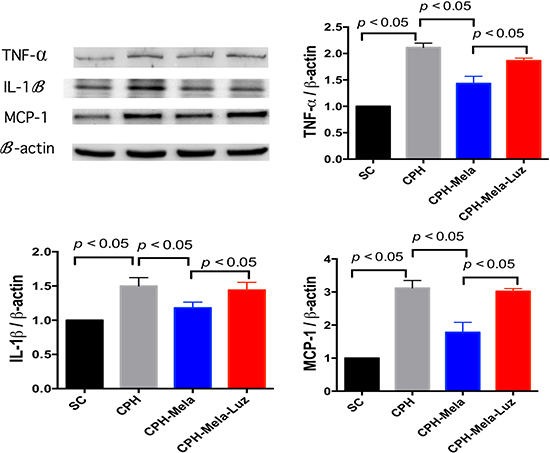 The study aimed to explore the therapeutic effect and action mechanisms of melatonin to improve cognitive impairment in CHP mice models. The WM lesion and glial cells activation were exhibited in the CHP mice model just as they demonstrated in previous studies [13, 14]. Melatonin was showed to both attenuate the WM lesions and glial cells activation and improve cognitive function in our study. Melatonin is found to possess strong anti-oxidative effect by inhibiting the expression of NADPH oxidases (NOX) in many studies [15, 16, 18, 19, 42]. Among the NOXs, NOX-I and NOX-II play major regulating roles in oxidative stress reactions [15, 16, 18, 19, 42]. Brain damage in CHP mice was effectively attenuated by reducing the oxidative stress in previously published studies [43, 44]. Our study demonstrated that melatonin attenuated the expression of oxidative stress in CHP mice, indicating that melatonin possessed with anti-oxidative effect.

Cerebral hypoxia induced by CHP leads to the increase of inflammation reaction, which plays an important role in the pathogenesis of WM lesion, gliosis and cognitive dysfunction [13, 14]. The expression of inflammatory cytokines (i.e. MCP-1, TNF-α, and IL-1β) was found increased in the CHP mice in our study and this was consistent with the findings in previous reports [13, 14] Melatonin was then found to attenuate the expression of inflammatory cytokines in mRNA and protein levels and improved the WM lesion, gliosis and cognitive function in our study. These results were also consistent with the results in previous reports [12–14]. We therefore conclude that melatonin is effective to attenuate the brain damage induced by CHP through inhibiting oxidative stress and inflammation.

Protection against brain damage of melatonin may through MT2 receptor pathway

This study has several limitations. First, this study did not investigate the optimal dosage of melatonin for maximizing the brain-protecting effects in this CHP mice model. However, previous studies have demonstrated that the dose of melatonin (10 mg/kg/day) offer adequate protective effects in mice with ischemic organ dysfunction [23, 54]. We therefore followed the dosage they used in previous studies [23, 54]. It proved in the end to be suitable for our study. Second, we didn’t provide the CCH mice with Luzindole only treatment to investigate whether MT2 antagonist were associated with the effects of endogenous melatonin mediated brain damage. However, recent paper found chronic use of MT2 antagonist were involved in the effects of endogenous melatonin to mediate the hippocampal neurogenic process in C57BL/6 mice [55]. This finding provided that MT2 antagonist has an effect on its own, which was contrasts the improvement due to endogenous melatonin. Third, the age of mice is twelve-week-old with a duration of 30 days for cerebral hypoperfusion in the study. Clinical VCI is a long-term progressive disease found in elderly patients. This study did not evaluate the long-term impact of melatonin treatment; it would not be suitable to directly apply these results to a clinical setting. Forth, although the exploration of the therapeutic effects of melatonin was attempted, the precise signaling pathways through melatonin in protecting brain damage in CHP mice model were not completely elucidated.

In conclusion, melatonin offers a substantial therapeutic advantage of protection against CHP-induced brain damage and cognitive dysfunction in a murine model. The results of this study encourage a prospective clinical trial in order to evaluate the therapeutic potential of melatonin in the clinical setting of VCI.

Under deep anesthesia by inhalational 3.0% isoflurane in a 50:50 mixture of oxygen to room air, mice were placed in a prone position on a warming pad at 37°C. The skin overlying the right skull was reflected. Cerebral blood flow was measured using laser Doppler imaging (MoorLD1- 2l; Moor Instruments, Devon, UK). After equilibration to the experimental setup, laser point was fixed perpendicular to the skull at 1 mm posterior and 2.5 mm lateral to the bregma and local cerebral blood flow was obtained. The baseline CBF recordings were obtained before and on day-14 and day-28 after the BCAS. The CBF values were expressed as a percentage of the baseline value.

After BCAS, the mice were anesthetized by inhalational 3.0% isoflurane and perfused transcardially with 0.01 mol/L PBS (pH 7.4), then with a fixative containing 4% paraformaldehyde and 0.2% picric acid in 0.1mol/L phosphate buffer (pH7.4), and stored in 20% sucrose in 0.1 mol/L PBS (pH 7.4). The brains were embedded in paraffin and sliced into 5 μm-thick coronal sections. Kluver-Barrera (KB) staining was used to determine the demyelination changes in different groups. The severity of the WM lesions was graded as normal (grade 0), disarrangement of the nerve fibers (grade 1), the formation of marked vacuoles (grade 2), and the disappearance of myelinated fibers (grade 3) as described elsewhere. [12] For immunohistochemistry, the rest of the coronal blocks were cut into serial sections (10μm thick) in a cryostat and incubated overnight with a rabbit anti–glial fibrillary acidic protein (GFAP) antibody (diluted 1: 1000; DAKO, Denmark) and goat anti-ionized calcium binding adaptor molecule-1 (Iba-1) antibody (1:200, Abcam). Subsequently, these sections were treated with the appropriate biotinylated secondary antibodies (Santa Cruz Biotechnology) and were visualized with 0.01% diaminobenzidine tetrahydrochloride and 0.005% H2O2 in 50 mmol/L Tris HCl (pH 7.6). The WM lesions were evaluated in corpus callosum. We counted the numerical density of the glial cell nuclei with immunopositive perikarya in a 0.125 mm2 area of corpus callosum in 4 animals from each group. We counted the numerical density of the glial cell nuclei with immunopositive perikarya in the white matter, as described [12].

The mRNA expressions of MCP-1, IL-1β, TNF-α, NF-ϰB, NOX-I and NOX-II in each of the three groups of animals were analyzed with RT-qPCR and compared. RNA was extracted from brain using EuroGold Trifast (EuroClone). Quantitec Reverse Transcription Kit (Qiagen), according to manufacturer’s protocol. Quantitative analysis was performed using SYBR Green 2X PCR Master Mix (Applied Biosystem). Each sample was run in triplicate and normalized to the expression of housekeeping B-actin gene as previously described [12].

Equal amounts (30 μg) of protein extracts from brain of the animals (n = 6, for each group) were loaded and separated by SDS-PAGE using 7% or 12% acrylamide gradients. The membranes were incubated with monoclonal antibodies against NAPH oxidase (NOX)-I (1:1500, Sigma), NOX-II (1:500, Sigma), IL-1β (1:1000, proteintech), r-H2A (1:1000 Abcam), MCP-1 (1:1000, Millipore), TNF-α (1: 1000, Cell Signaling) were used. Signals were detected with horseradish peroxidase (HRP)-conjugated goat anti-mouse, goat anti-rat or goat anti-rabbit IgG. Proteins were transferred to nitrocellulose membranes which were then incubated in the primary antibody solution overnight, followed by a washing procedure carried out three times within 15 minutes. The nitrocellulose membranes were then incubated with the second antibody solution for one hour at room temperature. The washing procedure was repeated three times within 15 minutes. Immunoreactive bands were visualized by enhanced chemiluminescence (ECL; Amersham Biosciences), which was then exposed to Biomax L film (Kodak). For quantification, ECL signals were digitized using Labwork software (UVP).

All data were presented as mean ± SD. Statistical analyses were performed using SPSS 18.0 (SPSS Inc, Chicago, IL) to conduct one-way and two-way analysis of variance (ANOVA), followed by a Bonferroni multiple-comparison post hoc test to compare the physiological parameters. A Mann–Whitney U test was used to compare the severity of WM lesions between the groups. P < 0.05 was considered to be statistically significant.

The authors declare that they have no competing interests of any sort, including commercial association, such as consultancies, stock ownership or other equity interests or patent-licensing arrangements.