CD147 expression was positively linked to aggressiveness and worse prognosis of gastric cancer: a meta and bioinformatics analysis

CD147 (Basigin, M6 and tumor cell-derived collagenase stimulatory factor) was isolated from the surface of LX-1 lung carcinoma cells. Because it might increase cancer invasion by inducing MMP synthesis in neighboring fibroblasts, endothelial and cancer cells, including MT-MMP, MMP-1, MMP-2, and MMP-3, and the endogenous activators of MMP-2, CD147 is also named as EMMPRIN, which indicates its Extracellular Matrix Metalloproteinase Inducer activity [1–2]. It is a glycosylated cell surface transmembrane protein, and has core (approx 27 kDa), highly- (HG, 45–65 kDa) and lowly-glycosylated (LG, 32–44 kDa) forms [3]. Wang et al. [4] found that inhibition of N-glycosylation increased the ubiquitination and degradation of CD147. F-Box protein FBXO22 could mediate the polyubiquitination and degradation of CD147 by interacting with CD147, and CD147 polyubiquitination by FBXO22 reversed cisplatin resistance of tumor cells [5]. Jia et al. [6] reported that CD147 deglycosylation down-regulated MMP-11 expression and the adhesive capability of murine hepatocarcinoma cells. Our previous study showed that HG form was more expressed in ovarian cancer than normal ovary, and metastatic than primary cancers. HG-CD147 expression was positively correlated with FIGO staging and dedifferentiation of ovarian cancer [7]. Its two Ig-like domains in its extracellular portion induce MMP expression, while it is also cleaved by MMPs in tumor environments [8]. Serum or urine CD147 level was higher in transitional cell carcinoma and prostate cancer than healthy control [9, 10].

CD147 has a broad tissue distribution, but its overexpression is also seen in breast cancers, HCC, esophageal and cervical squamous cell carcinoma, genitourinary, gastric, colorectal, prostate and ovarian cancers [1, 2, 17]. Liang et al. [18] found that promoter hypomethylation of CD147 might result in the cancer-related overexpression of CD147 because more Sp1 protein bound to its promoter [18, 19]. Wang et al. [20] showed that CD147 silencing inhibited cell proliferation, invasion and increased chemosensitivity to cisplatin in SGC7901 cells in vitro. In our previous work, CD147 expression was found to positively correlate with tumor size, depth of invasion, lymphatic invasion, expression of ki-67, MMP-2, MMP-9 and VEGF, angiogenesis and unfavorable prognosis of gastric cancer [21]. Here, we performed a meta and bioinformatics analysis to confirm the clinicopathological and prognostic significances of CD147 expression at both protein and mRNA levels.

Figure 1 is a flow diagram of paper selection for our meta-analysis. As shown in Table 1, a total of 22 articles on the relationship between CD147 expression and cancer risk, clinicopathological or prognostic parameters of gastric cancer were retrieved for our meta-analysis by immunohistochemistry in PubMed, Web of Science, BIOSIS, SciFinder and CNKI. Only 20 articles contained the samples of normal gastric mucosa [21–40]. There appeared the comparison between CD147 expression and clinicopathological characteristics of gastric cancer in 22 pieces of paper, including sex, depth of invasion, lymph node metastasis, TNM staging and Lauren’s classification [21–42]. Finally, we discussed the prognostic significance of CD147 expression in 4 articles [21, 24, 27, 32]. 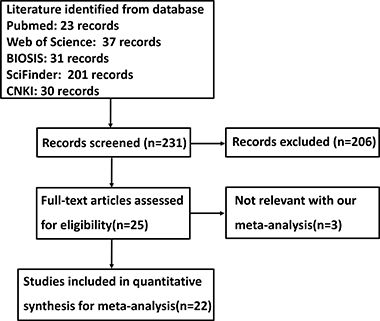 Association between CD147 expression and cancer susceptibility of gastric mucosa

Association between CD147 expression and clinicopathological parameters of gastric cancer

Association between CD147 expression and survival rate of gastric cancer

As indicated in Figure 2I, the pooled result from 4 studies demonstrated a significant association between CD147 expression and unfavorable overall survival in patients with gastric cancer (HR = 0.79, 95% CI:0.65–0.96, p < 0.05). Results showed that CD147 overexpression had an unfavorable prognostic value in gastric cancer patients.

The heterogeneity test was performed as shown in Figure 3. Sensitivity analysis was used to evaluate individual study’s influence on the pooled results by deleting one single study each time from pooled analysis. The T-staging result of CD147 expression in Gao’s study had a significant effect on the pooled OR. When this study was excluded, the heterogeneity test was significantly reduced (data not shown). 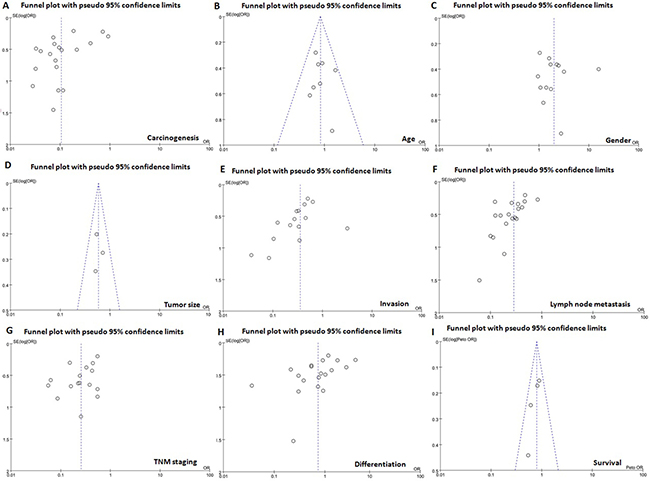 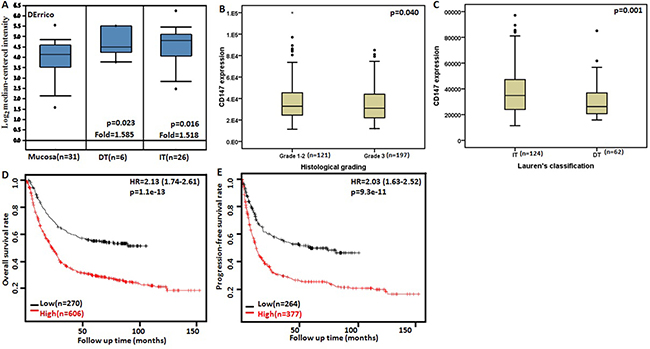 According to Kaplan-Meier plotter, we found that a higher CD147 mRNA expression was negatively correlated with overall and progression-free survival rates of all cancer patients (Figure 4D and 4E, p < 0.05). As shown in Table 2, it was the same for the patients with any gender, stage II-IV, T2–3, N1–3, M0, surgery alone, 5-FU-based adjuvant, intestinal-type and diffuse-type, Her2-positive and -negative carcinomas (p < 0.05).

Table 2: The prognostic significance of CD147 mRNA in gastric cancer

In the present study, CD147 overexpression was found in gastric cancer, and positively correlated with tumor size, depth of invasion, lymph node metastasis, or TNM staging, in line with the results form bladder urothelial carcinoma, laryngeal carcinoma, thyroid cancer, colorectal cancer, ovarian cancer, glioma, and tongue squamous cell carcinoma [53–59]. These findings suggested that its up-regulation contributed to carcinogenesis and subsequent progression, and might be employed as a good marker for carcinogenesis and aggressive behaviors. A higher CD147 mRNA in intestinal-type or G1–2 carcinoma was noted than in diffuse-type or G3 ones respectively, indicating that its distinct expression might underlie the molecular basis of differentiation in gastric cancer. In contrast, Zhu et al. [60] found that higher CD147 expression was correlated with the poor tumor differentiation of HCC. However, a high heterogeneity was seen in the correlation of CD147 expression with carcinogenesis, invasion, lymph node metastasis, TNM staging and differentiation of gastric cancer, which might be due to the various anti-CD147 antibody sources, different populations, sample selection bias, different evaluation and statistical methods, and something else.

Recently, Hu et al. [68] has reported that CD147 overexpression may serve as a promising diagnostic and prognostic marker for gastric cancer using a meta- and immunohistochemical study. The differences between our and Hu’s studies are summarized as follows: 1) We have clarified the clinicopathological and prognostic significances of CD147 protein expression as previously reported [21]. 2) We collected more articles from Pubmed, Web of Science, Biosis, Scifinder and CNKI than Hu et al. (22 vs 17); 3) The prognostic significance of CD147 protein expression was analyzed by extracting the survival data using Engauge Digitizer software for our meta-analysis. 4) Importantly, we performed bioinformatics analysis to explore the clinicoapthological and prognostic significances of CD147 mRNA expression using Oncomine, TCGA and KM plotter.

In conclusion, CD147 expression was up-regulated in gastric cancer, and positively correlated with advanced clinicopathological features and worse prognosis at both mRNA and protein levels. It might be employed as a good potential marker for carcinogenesis, aggressive behaviors and unfavorable prognosis of gastric cancer patients. However, the following limitations should be noted: (1) the potential publication bias stems from published results being predominantly positive; (2) patient populations in our study were limited, as patients came only from Asia and Brazil; (3) all of the survival data were extracted from survival curves, which may introduce subjective bias.

We performed a publication search using PubMed, Web of Science, BIOSIS and SciFinder updated on March 14, 2017. The following search terms were used: (CD147 OR EMMPRIN OR Basigin) AND (gastric OR stomach) AND (cancer OR carcinoma OR adenocarcinoma). Searching was done without restriction on language or publication years. Inclusion criteria for studies: (1) articles to observe the alteration in CD147 expression in gastric cancer by immunohistochemistry; (2) papers to compare CD147 expression with pathobiological behaviors and prognosis of gastric cancer by immunohistochemistry. Exclusion criteria included: (1) abstract, comment, review and meeting; (2) duplication of the previous publications; (3) Western blot, RT-PCR, cDNA microarray, or transcriptomic sequencing for CD147 expression; (4) lack of sufficient information.

Based on the inclusion criteria, two reviewers (HC Zheng and BC Gong) independently extracted information from all eligible publications. The following information were included in each study: name of first author, year of publication, country, ethnicity, antibody company, numbers of cases and controls, expression alteration, and follow-up outcome. Regarding survival analysis, we used Engauge Digitizer software to extract data from Kaplan-Meier curves and calculated the Hazard ratios (HR) and their corresponding 95% confidence intervals (CI). Any disagreement was resolved through discussion until the two reviewers reached a consensus.

Two reviewers (HC Zheng and BC Gong) independently assessed the quality of the included studies according to Newcastle Ottawa Scale (NOS) (http://www.ohri.ca/programs/clinical_epidemiology/oxford.htm). The scale consists of three components related to sample selection, comparability and ascertainment of outcome.

The individual gene expression level of CD147 was analyzed using Oncomine (www.oncomine.org), a cancer microarray database and web-based data mining platform for a new discovery from genome-wide expression analyses. We compared the differences in CD147 mRNA level between gastric mucosa and cancer. All data were log-transformed, median centered per array, and standard deviation normalized to one per array. The expression (RNA-seqV2) and clinicopathological data of 392 gastric cancer patients were downloaded from the Cancer Genome Atlas (TCGA) database by TCGA-assembler in R software. We integrated the raw data, analyzed CD147 mRNA expression in gastric cancer, and compared it with clinicopathological and prognostic data of the patients with gastric cancer. Additionally, the prognostic significance of CD147 mRNA was also analyzed using Kaplan-Meier plotter (http://kmplot.com).

HWE was evaluated using Chi-square test in control groups of each study. Strength of association between CD147 expression and cancer risk was assessed by odds ratios with 95% confidence intervals. Statistical significance of the pooled OR was determined by Z test. If there was no significant heterogeneity, the fixed effect model (Mantel-Haenszel method) would be employed. Otherwise, the random effect model (DerSimonian and Laird method) would be used excluding prognostic analysis. Heterogeneity effect was then quantified by I2 test, which was subdivided into low, moderate and high degrees of heterogeneity according to the cut-off values of 25%, 50% and 75% respectively. Publication bias was evaluated by funnel plot and quantified by Begg’s test and Egger’s test to assess funnel plot asymmetry. Meta-analyses were performed with Revman software 5.3 and data from TCGA database was dealt with SPSS 10.0 software using student t test. Kaplan-Meier survival plots were generated and comparisons between survival curves were made with the log-rank statistic. Two-sided p < 0.05 was considered as statistically significant.