Conclusions: Our data suggest a mechanism for hsa-miR-429 to play oncogenic roles via inhibiting CDKN2B.

The complex phenotypes of bladder cancer cells are controlled by functional response genes [3]. MicroRNAs are small non-coding RNAs that mainly inhibit gene expression [4]. They are increased or decreased in cancers and able to promote or suppress cancer development [5]. Hsa-miR-429 is increased in cancers, such as endometrial carcinoma [6] and colorectal cancer [7]. In contrast, some other findings suggest that hsa-miR-429 functions as a tumor suppressor in osteosarcoma [8], renal cell carcinoma [9] and cervical cancer [10]. We have validated that hsa-miR-429 is indeed increased in bladder cancer [11], while it has been found that hsa-miR-429 reverses epithelial-mesenchymal transition by restoring E-cadherin expression in bladder cancer [12]. Hsa-miR-429 belongs to miR-200 family, and the upregulation of miR200 family has also been reported in bladder cancer [13]. For example, there should be a positive relationship between high microRNA-200C expression and the risk of death from disease in muscle-invasive urothelial carcinoma of the bladder, as revealed by one published work [14].

Partial sequence pairing between miRNA and target mRNA leads to translation inhibition and/or mRNA degradation in animals [15]. We have identified that hsa-miR-125b decreased its target SIRT7 at both mRNA and protein levels through partial sequence pairing with the target sites [16]. Cyclin-dependent kinase inhibitor 2B (CDKN2B) is a tumor suppressor [17]. Deletion, mutation and hypermethylation of CDKN2B gene have been reported to lead to the loss of CDKN2B expression [18]. There is a negative regulatory role of miR-15a-5p in the apoptosis of smooth muscle cells via binding to the CDKN2B mRNA 3’UTR [19]. In silico analysis indicates that CDKN2B 3’UTR has binding site for hsa-miR-429. This finding proposed an important question about the relationship between hsa-miR-429 and CDKN2B in bladder cancer. We hypothesized that hsa-miR-429 may play oncogenic roles via inhibiting CDKN2B in bladder cancer.

Hsa-miR-429 and CDKN2B were inversely expressed in bladder cancer

**TNM according to the seventh edition of staging TNM of Union Internationale Contre Le Cancer (UICC) in 2009. 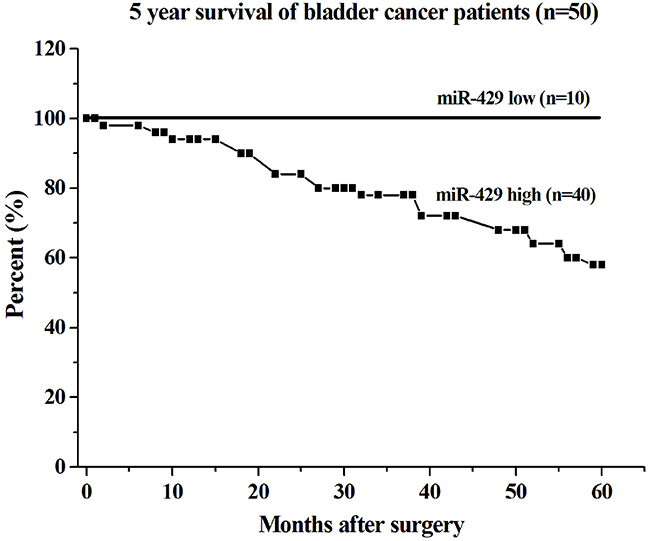 Table 2: The expression of hsa-miR-429 and CDKN2B in bladder cancer

Hsa-miR-429 decreased the expression of CDKN2B

Forty-eight hours after transfection, CDKN2B expression levels were measured by qRT-PCR and western blot analysis. Both CDKN2B siRNA and hsa-miR-429 mimic decreased CDKN2B at mRNA and protein levels in T24 and 5637 cells (Figure 2A and 2B). 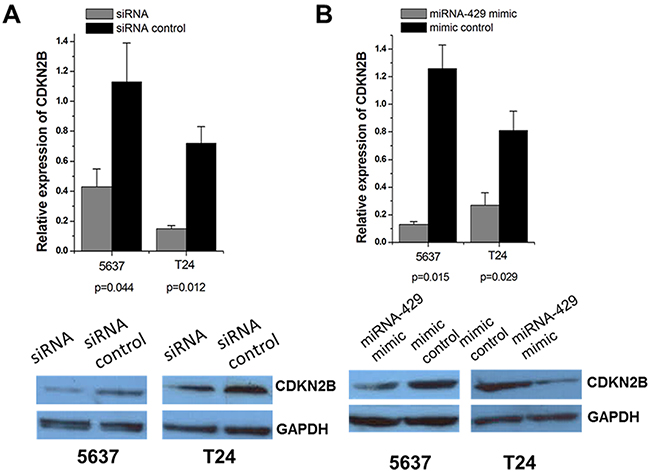 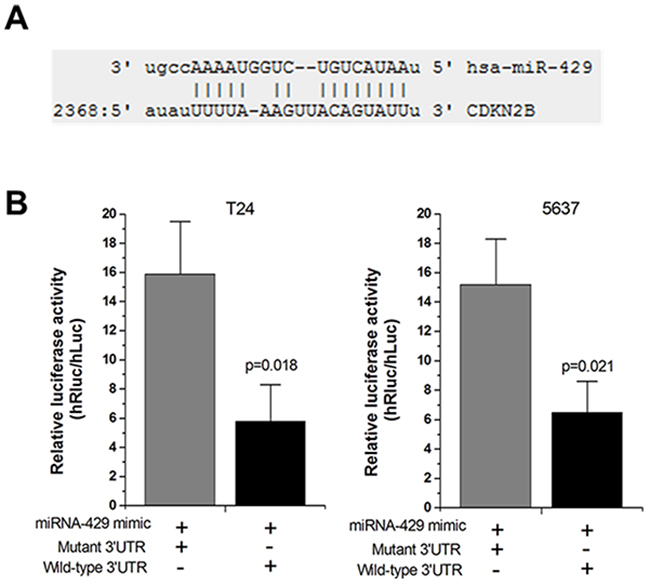 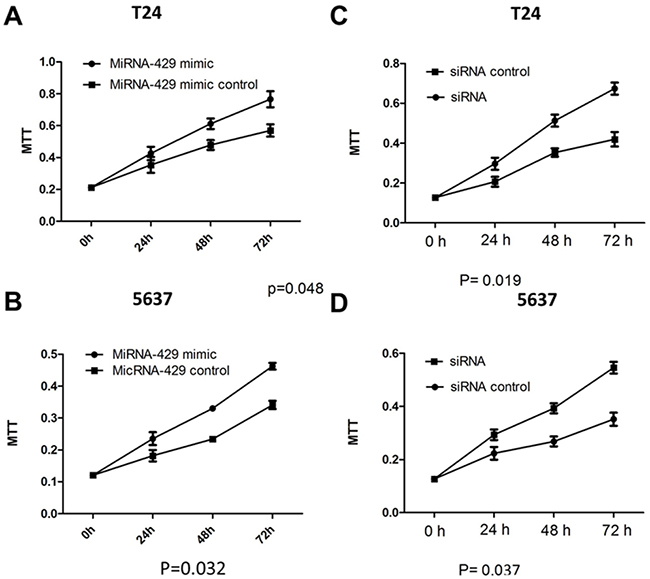 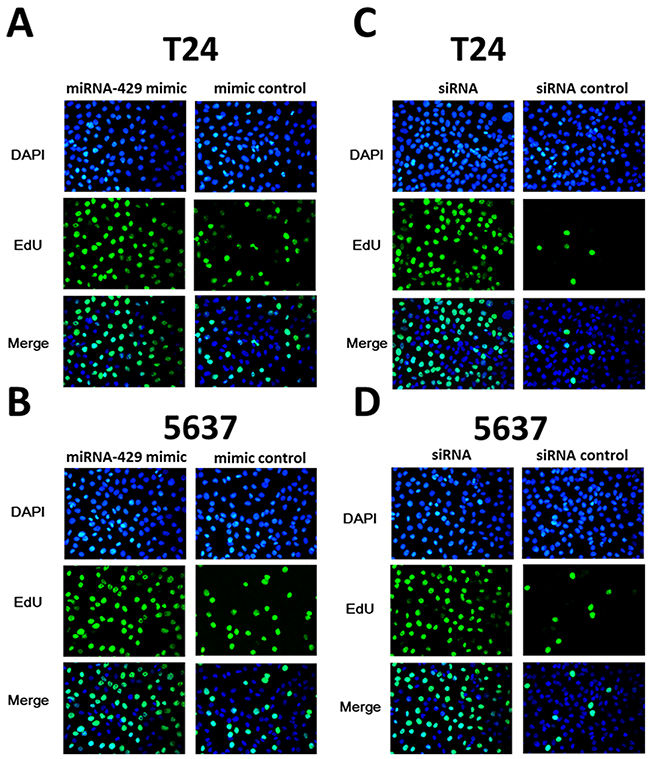 Figure 6: Cell apoptosis changes caused by transfection of CDKN2B siRNA and hsa-miR-429 mimic forty-eight hours after transfection, cell apoptosis changes were determined by Caspase 3 ELISA. (A) Hsa-miR-429 mimic inhibited T24 and 5637 apoptosis. (B) and (C) CDKN2B siRNA inhibited T24 and 5637 apoptosis. Data are indicated as mean ± SD. Each experiment in both cell lines was performed in triplicate for three independent times.

To investigate the possible impacts of hsa-miR-429 on in vivo growth of bladder cancer cells, the cell growth changes of T24 (Figure 7A) and 5637 (Figure 7B) cells were determined by tumourigenicity assay. Significant differences were demonstrated between the miR-429 expression vector and empty vector-transfected cells. Has-miR-429 was able to promote tumor development, compared to empty control vector treatment. These results further confirmed the positive role of has-miR-429 in the growth of bladder cancer.

CDKN2B was an in silico predictable target of hsa-miR-429. The mature hsa-miR-429 sequence was partially complementary with CDKN2B 3’UTR target sequence. In consistent with the prediction, we showed that hsa-miR-429 and CDKN2B were inversely expressed in bladder cancer. Hsa-miR-429 mimic decreased the expression of CDKN2B at both mRNA and protein levels. Binding site was confirmed between hsa-miR-429 and CDKN2B. These findings suggested that CDKN2B is a real target of hsa-miR-429. In this study, we identified that overexpression of hsa-miR-429 is a novel contributor to the down-regulation of CDKN2B in bladder cancer, suggesting that post-transcriptional inhibition plays roles in repressing CDKN2B expression.

The primary tumor samples and paired adjacent normal urothelia were obtained from 50 patients with bladder urothelial carcinoma newly diagnosed at the Department of Urology, Shenzhen Second People’s Hospital. The clinicopathological features of the patients are provided in Table 1. The informed consent from the patients was obtained. All the patients have been followed up for at least 5 years. All procedures performed in studies involving human participants were in accordance with the ethical standards of the Institutional Review Board of the Second People’s Hospital of Shenzhen and with the 1964 Helsinki declaration and its later amendments or comparable ethical standards.

All experiments involving animals were approved by Institutional Review Board of Shenzhen 2nd People’s Hospital (Shenzhen, China). Stable transfection cell lines were constructed in our lab by transfecting the miR-429 expression vector or empty vector into T24 and 5637 cells and selecting with G-418. Four-week-old BALB/c athymic nude mice were bred in laminar flow cabinets and cultured at a constant humidity and temperature (25–28°C). In detail, 1×107 T24 or 5637cells were suspended in PBS and injected subcutaneously into the flank of nude mice (3 in each group) on day 0. Tumor growth was monitored by the tumor volume, which was calculated by the formula: Volume (mm3) = width2 (mm2) × length (mm) /2. The mice were sacrificed on day 42, and the tumors were excised. The in vivo experiment was repeated three times.

The authors thank all the donors whose names were not included in the author list, but who participated in this program.

The authors declare that they have no conflicts of interest with this work.