Here, we used an informatics-based approach to identify novel biomarkers of overall survival and tumor progression in non-small cell lung cancer (NSCLC) patients. We determined whether nuclear-encoded genes associated with mitochondrial biogenesis and function can be used to effectively predict clinical outcome in lung cancer. This strategy allowed us to directly provide in silico validation of the prognostic value of these mitochondrial components in large, clinically-relevant, lung cancer patient populations. Towards this end, we used a group of 726 lung cancer patients, with negative surgical margins. Importantly, in this group of cancer patients, markers of cell proliferation (Ki67 and PCNA) were associated with poor overall survival, as would be expected. Similarly, key markers of inflammation (CD163 and CD68) also predicted poor clinical outcome in this patient population. Using this approach, we identified >180 new individual mitochondrial gene probes that effectively predicted significantly reduced overall survival, with hazard-ratios (HR) of up to 4.89 (p<1.0e-16). These nuclear-encoded mitochondrial genes included chaperones, membrane proteins as well as ribosomal proteins (MRPs) and components of the OXPHOS (I-V) complexes. In this analysis, HSPD1, a key marker of mitochondrial biogenesis, had the highest predictive value and was also effective in predicting tumor progression in both smokers and non-smokers alike. In fact, it had even higher predictive value in non-smokers (HR=5.9; p=3.9e-07). Based on this analysis, we conclude that mitochondrial biogenesis should be considered as a new therapeutic target, for the more effective treatment of human lung cancers. The mitochondrial biomarkers that we have identified could serve as new companion diagnostics to assist clinicians in more accurately predicting clinical outcomes in lung cancer patients, driving more personalized cancer therapy.

Treatment failure is the most critical obstacle for more effective anti-cancer therapy and personalized medicine [1, 2]. As such, this still dramatically limits the efficacy of most cancer treatments, especially in lung cancer patients. As a consequence, better biomarkers are needed for the early stratification of lung cancer patients into low-risk and high-risk groups at diagnosis [1-3].

Here, we examined the hypothesis that markers of mitochondrial biogenesis and function may have significant prognostic value in the early identification of high-risk lung cancer patients, with poor overall clinical survival and tumor progression. In this context, we employed a bioinformatics approach to assess the possible utility of nuclear-encoded mitochondrial gene transcripts in predicting clinical outcome.

Value of proliferative and inflammatory markers in the patient population

To identify new potential biomarkers, here we used publically available transcriptional profiling data from the tumors of lung cancer patients, with negative surgical margins (Figure 1), with 10 years of follow-up. Since proliferative markers are used as primary endpoints in clinical trials, we first assessed the prognostic value of Ki67 and PCNA, in this patient population. Tables 1, 2 and Figure 2A both show the prognostic value of these markers. The hazard-ratios for Ki67 and PCNA were 4.85 and 1.82, respectively, for overall survival (OS).

Table 2: Prognostic Value of PCNA and Markers of Inflammation in Lung Cancer 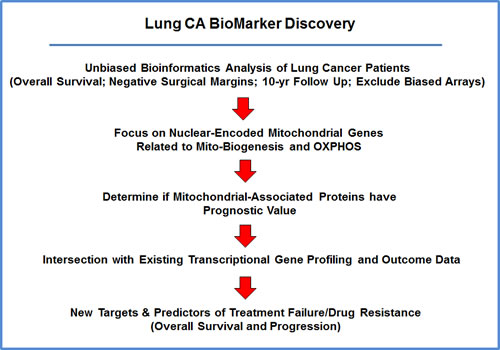 Figure 1: Diagram showing our bio-informatics approach to lung cancer biomarker discovery. For this analysis, we chose to focus on non-small lung cancer patients, with negative surgical margins, and 10-years of follow-up data (N = 726). In this context, we evaluated the prognostic value of mitochondrial markers for predicting overall survival, time to first progression, and post-progression survival. 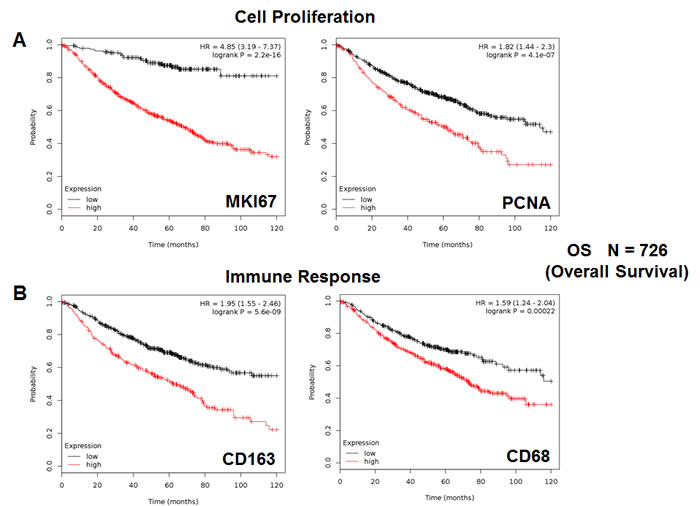 To test our hypothesis that increased mitochondrial mass, biogenesis and function contributes towards poor overall survival in lung cancer patients, we next assessed the prognostic value of specific mitochondrial markers.

Initially, we examined the behavior of mitochondrial chaperones and mitochondrial membrane proteins. Table 3 and Figure 3 both show that HSP60 (HSPD1) has the best prognostic value, with a hazard-ratio of 4.89 (p < 1.0e-17). Members of the TIMM and TOMM gene families also had prognostic value; AKAP1 and SLC25A5 also had significant value. Similar results were also obtained with mitochondrial creatine kinase isoforms (HR = 2.88-to-1.51) and PRKDC (DNA-PK), a critical kinase that helps maintain the integrity and the copy number of the mitochondrial genome (mt-DNA) (HR = 4.69-to-1.65), which functions in the DNA damage response.

Secondly, we examined the prognostic value of mitochondrial ribosomal proteins (MRPs), which contribute to the synthesis of key members of the OXPHOS-complexes, and are essential for mitochondrial biogenesis (Table 4). Twenty-one components of the large subunit (MRPLs) showed significant prognostic value, with hazard-ratios between 4.36 and 1.47. Notably, MRPL48 had the best prognostic value. Fifteen different components of the small subunit (MRPSs) showed significant prognostic value, with hazard-ratios between 4.10 and 1.27. As such, thirty-six different MRPs all predicted poor overall survival. Kaplan-Meier curves for representative examples are shown in Figure 4, panels A & B. 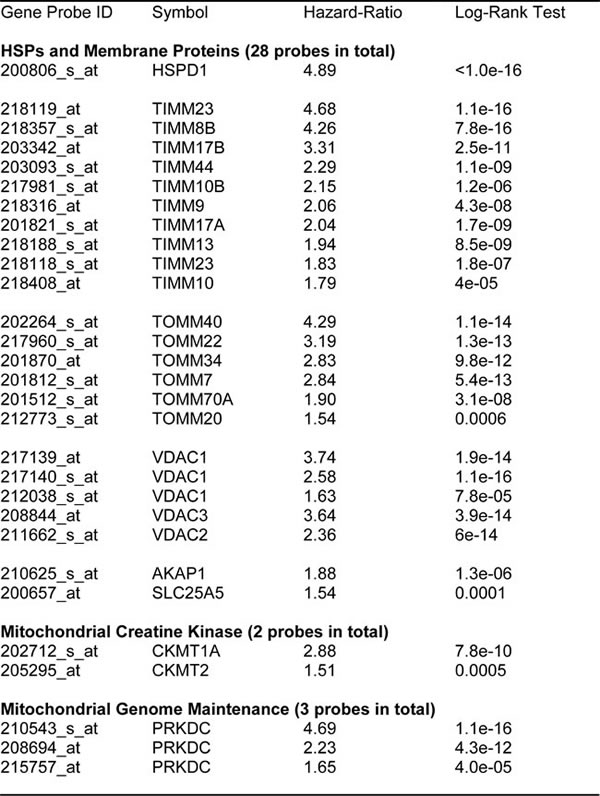 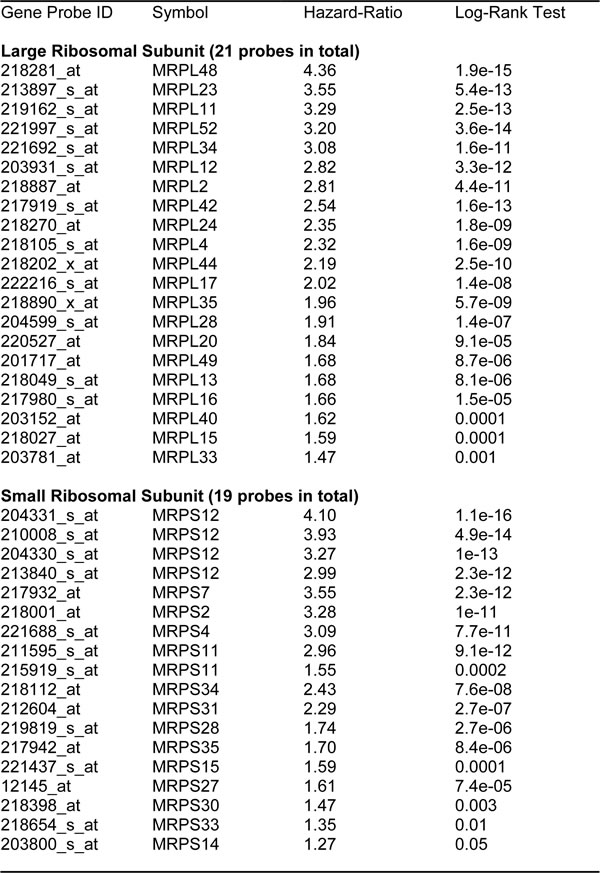 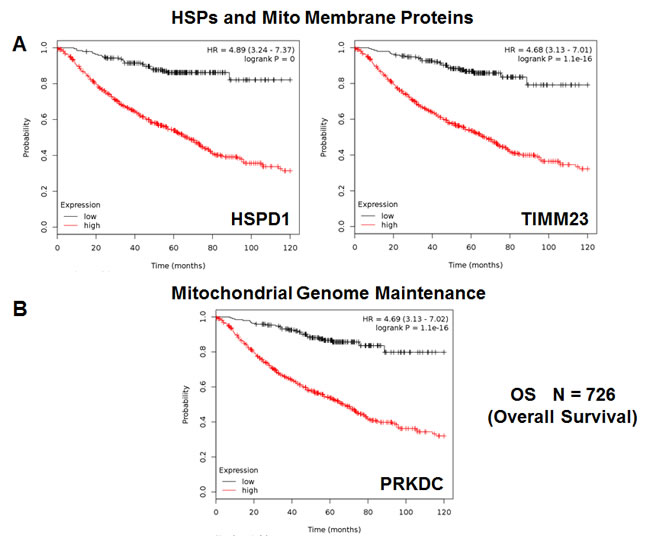 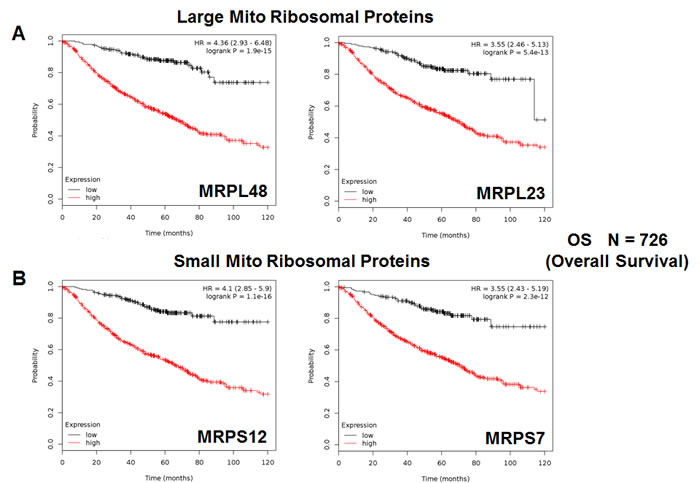 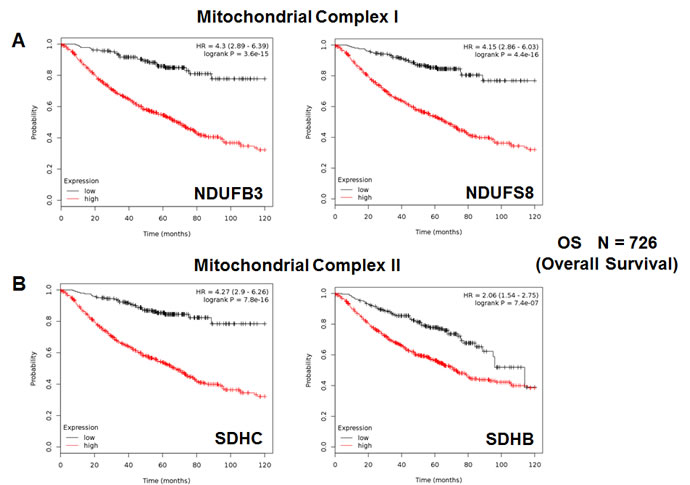 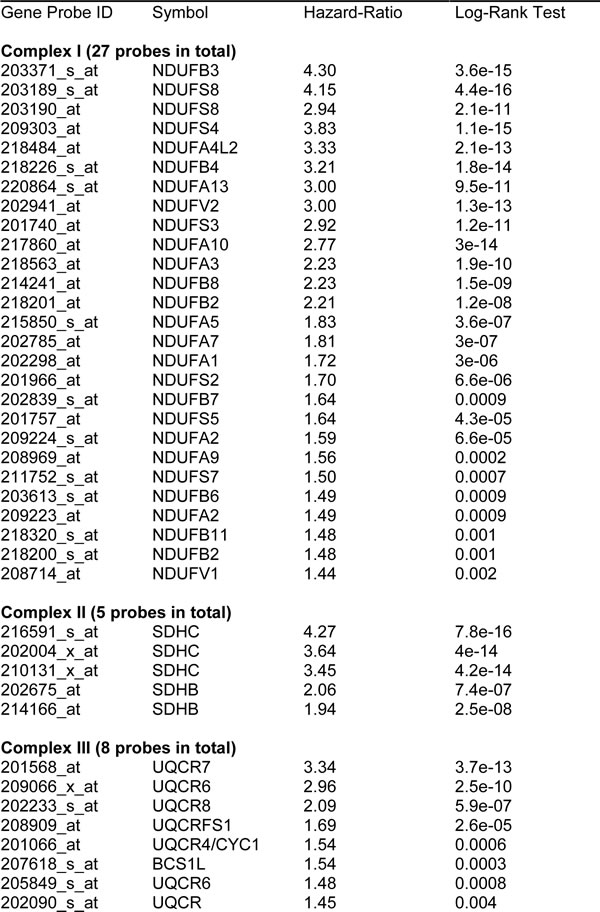 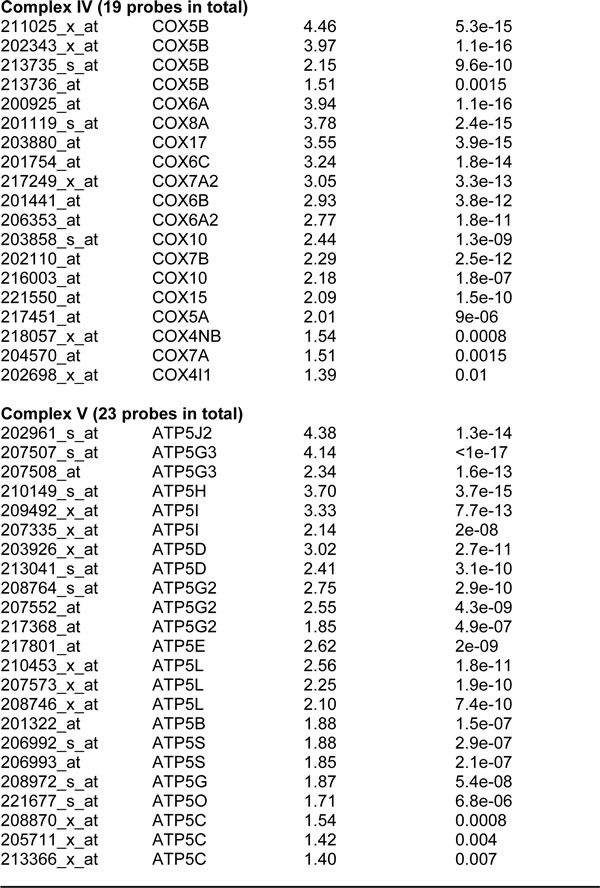 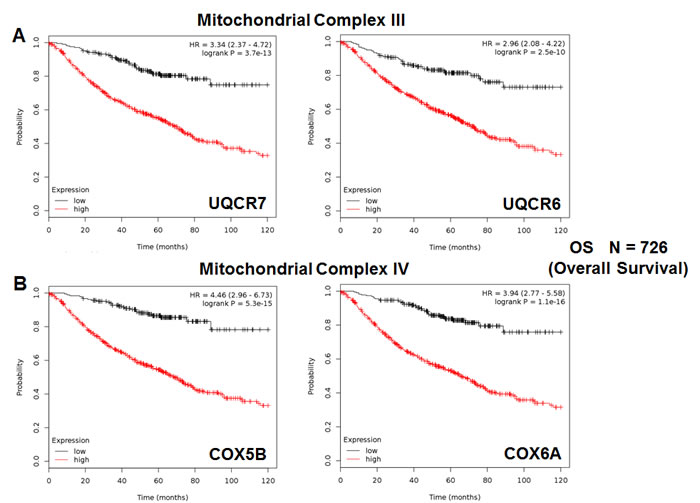 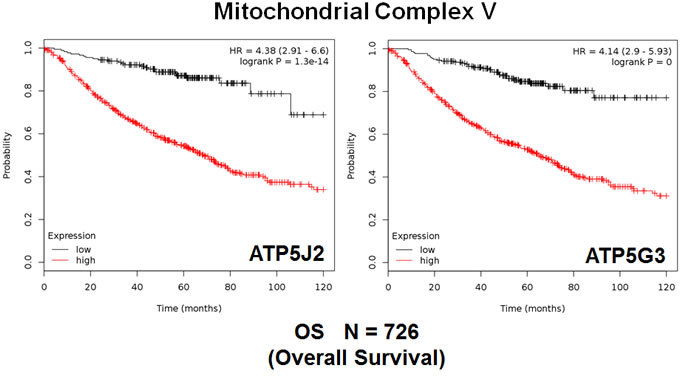 In order to further test the prognostic power of these individual mitochondrial biomarkers, we next selected the most promising one, HSPD1, and assessed its ability to predict tumor progression in the whole patient population (N = 726). Importantly, Figure 8 shows that the levels of HSPD1 effectively predict time to tumor progression and post-progression survival, with hazard ratios of 3.28 and 1.88, respectively.

In this context, this trend was also true for tumor progression, as HSPD1 was a better predictor of time to tumor progression and post-progression survival in non-smokers (Figures 9B and 10B), with hazard-ratios of 3.64 and 2.89, respectively.

Thus, the mitochondrial chaperone, HSPD1, is an effective predictive biomarker of overall survival and tumor progression, in both smokers and non-smokers as well. 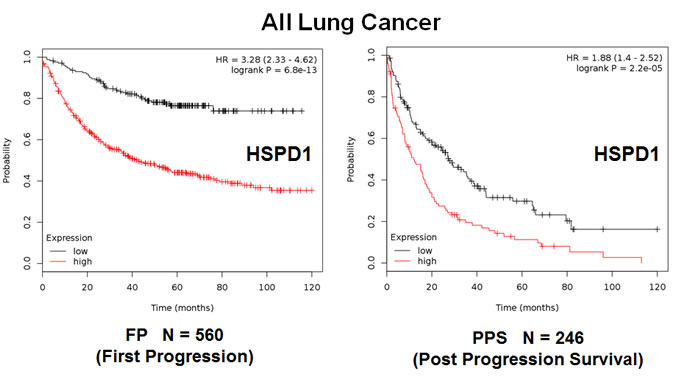 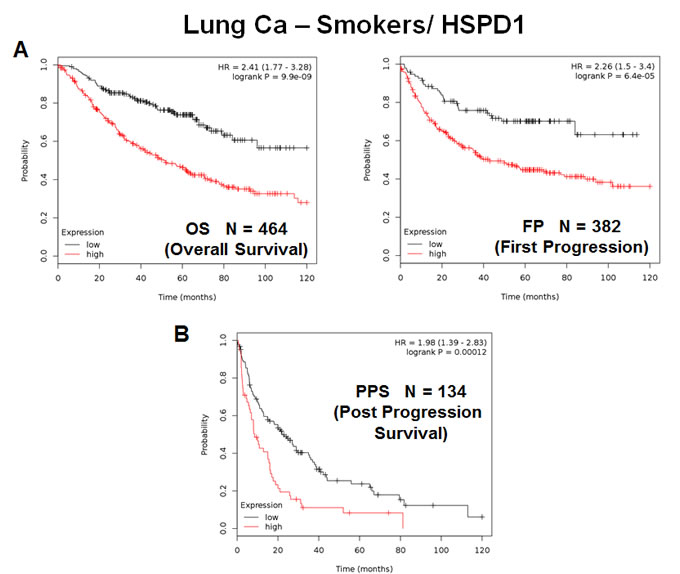 Figure 9: The mitochondrial chaperone, HSPD1, predicts poor clinical outcome and tumor progression in lung cancer patients: Smokers. Note that the levels HSPD1 effectively predict overall survival A., as well as time to first progression and post-progression survival B., in the “smoking” patient population. 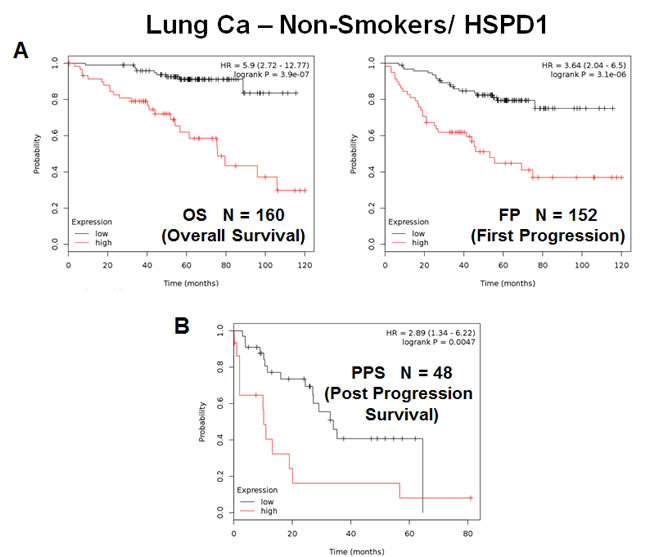 Figure 10: The mitochondrial chaperone, HSPD1, predicts poor clinical outcome and tumor progression in lung cancer patients: Non-Smokers. Note that the levels HSPD1 effectively predict overall survival A., as well as time to first progression and post-progression survival B., in the “non-smoking” patient population.

Recently, we determined the functional role of telomerase activity in lung cancer stem cell (CSC) propagation. More specifically, we indirectly monitored telomerase activity, by linking the hTERT-promoter to eGFP [4, 5]. Using A549 lung cancer cells, stably-transfected with the hTERT-GFP reporter, we then used GFP-expression fluorescence intensity to fractionate these cell lines into GFP-high and GFP-low cell populations. We functionally compared the phenotype of these GFP-high and GFP-low cell sub-populations. Importantly, we directly demonstrated that cancer cells with higher telomerase activity (GFP-high) are energetically-activated, with increased mitochondrial function and increased glycolysis. This was directly confirmed by proteomics analysis. Cells with high telomerase activity showed increased stem cell activity (measured via 3D-spheroid formation) and an increased capacity for cell migration (measured with a Boyden-chamber). These phenotypes were blocked by inhibitors of energy-metabolism, which targeted either mitochondrial OXPHOS or glycolysis, or by using doxycycline, an FDA-approved antibiotic, that inhibits mitochondrial biogenesis as an off-target effect [4, 5].

The levels of telomerase activity also determined the ability of hTERT-high CSCs to proliferate, as assessed by measuring DNA synthesis [4, 5]. Treatment with Palbociclib, an FDA-approved CDK4/6 inhibitor specifically blocked the propagation of lung CSCs, at concentrations in the nanomolar range. Therefore, telomerase-high CSCs are among the most energetically activated, migratory and proliferative cell sub-populations. These observations may provide a mechanistic explanation for why long telomere length [6-9] (a surrogate marker of increased telomerase activity) is specifically associated with metastasis and poor clinical outcome in NSC lung cancer and many other tumor types. Thus, high telomerase activity may drive poor clinical outcome by activating mitochondrial biogenesis, “fueling” the proliferation in lung CSCs [4, 5].

In this workflow, high-risk patients should be first identified at diagnosis by the high expression of mitochondrial markers in their primary lung tumors (Figure 11). Then, these patients could be treated with FDA-approved therapeutics (e.g., Doxycycline or Palbociclib; in combination with the standard of care), to improve poor overall survival. Importantly, both of these drugs have already been shown to be effective against the propagation of the lung CSC sub-population.

In this context, these mitochondrial markers could also be used as effective companion diagnostics for new experimental therapeutics targeting either mitochondria or telomerase (hTERT) and/or cell proliferation, to select the high-risk lung cancer patient sub-group, allowing proper treatment stratification. 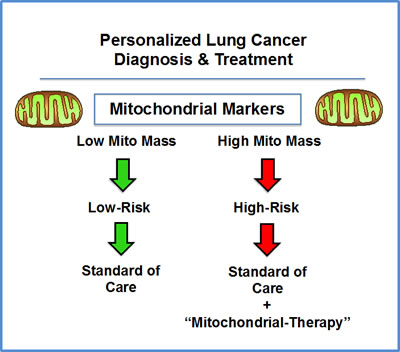 To perform K-M analysis on nuclear mitochondrial gene transcripts, we used an open-access online survival analysis tool to interrogate publically available microarray data from up to 1,926 lung cancer patients [3]. This allowed us to determine their overall prognostic value. For this purpose, we primarily analyzed 10-year follow-up data from non-small cell lung cancer (NSCLC) patients that had negative surgical margins (N = 726) [3]. Biased array data were excluded from the analysis. This allowed us to identify > 180 nuclear mitochondrial gene probes, with significant prognostic value. Hazard-ratios were calculated, at the best auto-selected cut-off, and p-values were calculated using the logrank test and plotted in R. K-M curves were also generated online using the K-M-plotter (as high-resolution TIFF files), using univariate analysis:

This allowed us to directly perform in silico validation of these mitochondrial biomarker candidates. The most updated version of the database (2015) was utilized for all these analyses.