Though the long noncoding RNA colon cancer associated transcript-1 (CCAT-1) has been shown to be involved in tumors of other tissues, its involvement in cervical cancer is still unknown. Therefore, the aim of this study was to investigate the molecular mechanism of CCAT-1 in cervical cancer. We quantified the expression of CCAT-1 long noncoding RNA in samples of cervical cancer tissue by real-time PCR. Effects of CCAT-1 expression on the proliferation and apoptosis of HeLa and CaSki cells were assessed by cell-count, colony-formation, and flow cytometry assays. Binding of the c-Myc protein to the CCAT-1 promoter was confirmed by chromatin immunoprecipitation. Finally, TOP-Flash and western blotting were used to examine the regulation of the Wnt/β-catenin pathway by CCAT-1. The results showed that compared with adjacent normal tissue, the expression of CCAT-1 in cervical cancer tissue was significantly upregulated. CCAT-1 expression was related to the stage and size of the tumor and recurrence prognosis. Then, we showed through functional assays that CCAT-1 could promote proliferation and inhibit apoptosis of cervical cancer cells. Furthermore, chromatin immunoprecipitation showed that c-Myc protein could promote CCAT-1 expression by binding to its promoter. Finally, fluorescent-reporter assays and western blotting showed that CCAT-1 could activate the Wnt/β-catenin pathway. In conclusion, we showed that CCAT-1 can be activated by the c-Myc protein and it can promote proliferation and inhibit apoptosis in cervical cancer cells by regulating the Wnt/β-catenin pathway. CCAT-1 might serve as a good prognostic indicator and target for treatment of cervical cancer.

The study of long non-coding RNAs (lncRNAs) has recently gained prominence in the field of gene regulation research. LncRNAs are RNA molecules that are longer than 200 nucleotides in length and contain no protein-coding capacity [2]. Increasing evidence suggests that lncRNAs are involved in tumorigenic processes such as cell proliferation, apoptosis, differentiation, and invasion in [3, 4] in cervical cancer [5, 6], retinoblastoma [7], and oral squamous cell carcinoma [8]. 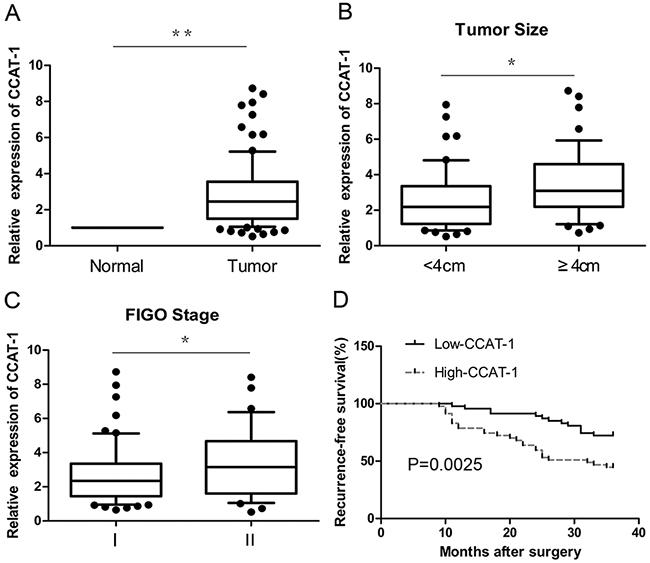 Relationship between CCAT-1 and clinicopathological parameters in cervical cancer

The results of qRT-PCR showed that the expression of CCAT-1 was related to the FIGO (International Federation of Gynecology and Obstetrics) stage and size of the tumor (P<0.05, Figure 1B, 1C). However, no significant relationship was observed between CCAT-1 levels and other parameters such as age and menopausal status of the patients, histological organization of the tissue, degree of differentiation, depth of invasion, lymphatic vascular space invasion (LVSI), and lymph node metastasis of the tumor (Table 1). Then, the median value of all 94 cervical cancer tissue samples was set as the cut-off point to separate tumors with low-level expression of CCAT-1 (low-CCAT-1 group) from those with high-level expression of CCAT-1 (high-CCAT-1 group). Kaplan-Meier survival analysis showed that recurrence-free survival of the low-CCAT-1 group was significantly higher than that of the high-CCAT-1 group (P=0.002, Figure 1D). COX univariate analysis showed that CCAT-1, FIGO stage, lymph node metastasis, and LVSI were prognostic factors for recurrence. Furthermore, COX multivariable analysis showed that only CCAT-1 expression level, FIGO stage, and lymph node metastasis were independent prognostic factors for recurrence (Table 2). 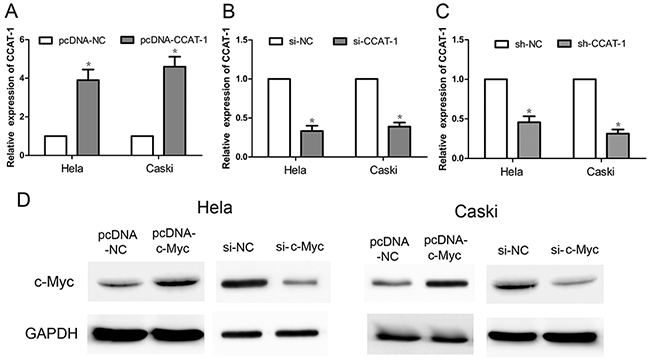 Effect of CCAT-1 on tumorigenic ability of cervical cancer cells

Tumorigenesis assays on nude mice showed that the tumorigenic ability of HeLa and CaSki cells transfected with sh-CCAT-1 was significantly lower than cells transfected with sh-NC (P <0.05, Figure 3A). Furthermore, qRT-PCR confirmed that the average CCAT-1 expression in tumors carrying sh-CCAT-1 was significantly lower than that of tumors carrying sh-NC (P <0.05, Figure 3B). 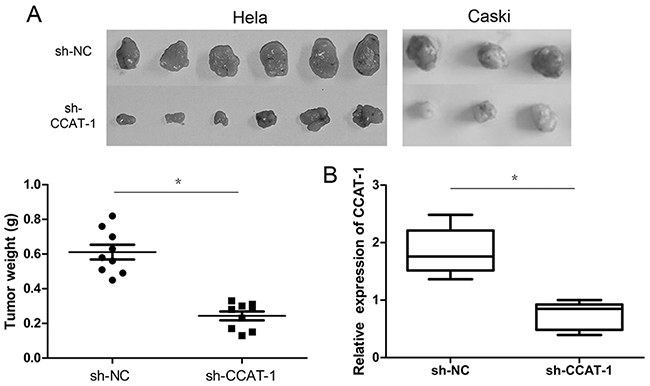 Figure 3: The effect of CCAT-1 on the proliferation of cervical cancer cells in vivo. (A) sh-CCAT-1 significantly inhibited the tumorigenic ability of HeLa and CaSki cells in vivo. (B) Expression levels of CCAT-1 were detected in xenograft tumor tissues by qRT-PCR. Each assay was performed in triplicate. *P < 0.05.

Effect of CCAT-1 on proliferation of cervical cancer cells 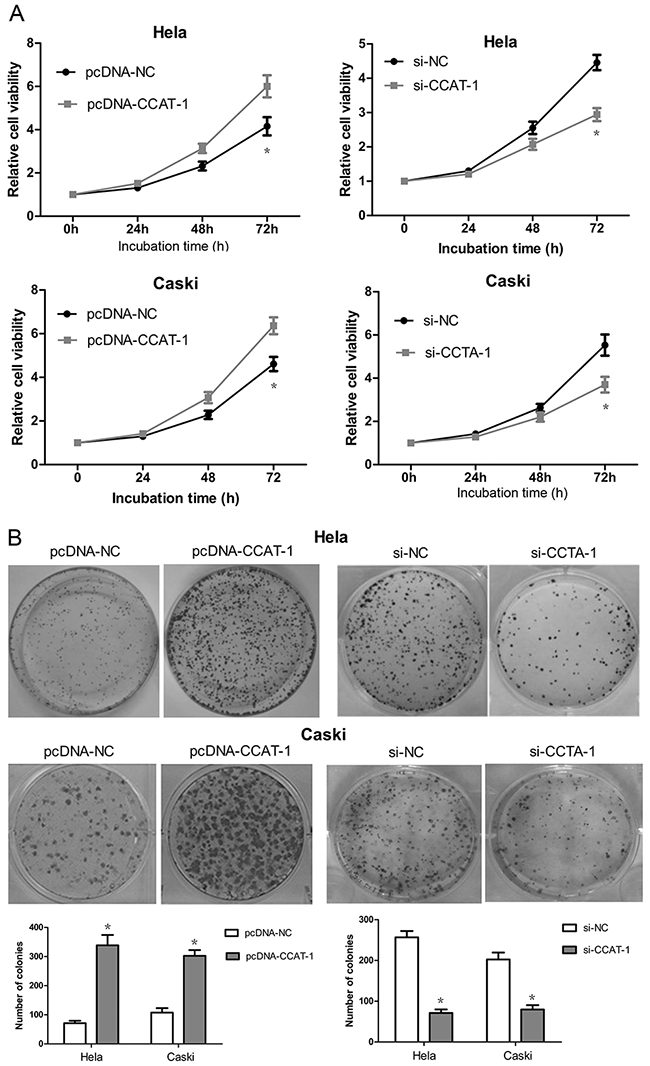 Figure 4: The effect of CCAT-1 on the proliferation of cervical cancer cells in vitro. (A) The growth curve and cell proliferative potential (CCK-8) were determined in HeLa and CaSki cells after pcDNA-CCAT-1 and si-CCAT-1 transfection compared to negative control. (B) Colony-formation assay was used to determine the cell proliferation ability at 48 h post-transfection. Each assay was performed in triplicate. *P < 0.05.

Effect of CCAT-1 on colony formation by cervical cancer cells

Effect of CCAT-1 on apoptosis of cervical cancer cells 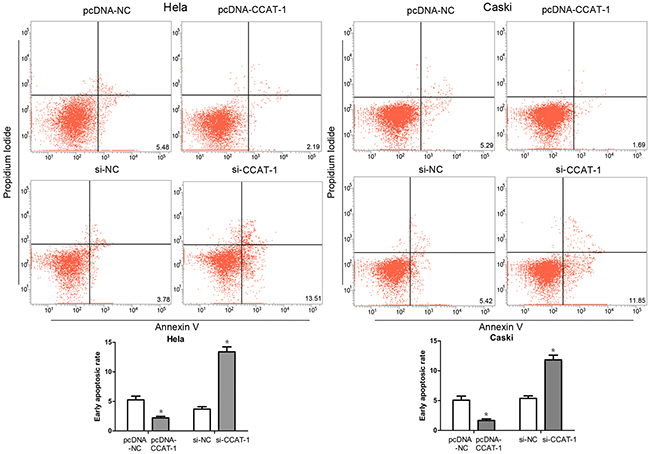 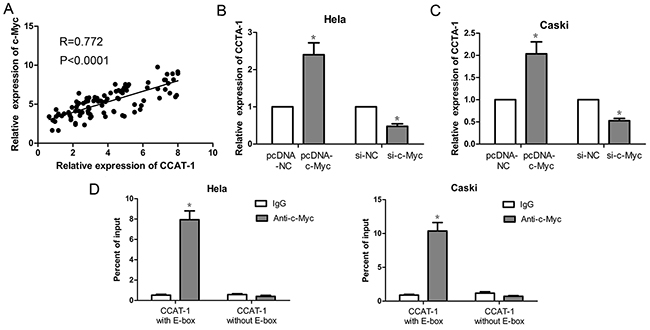 Effect of CCAT-1 on the activity of Wnt pathway 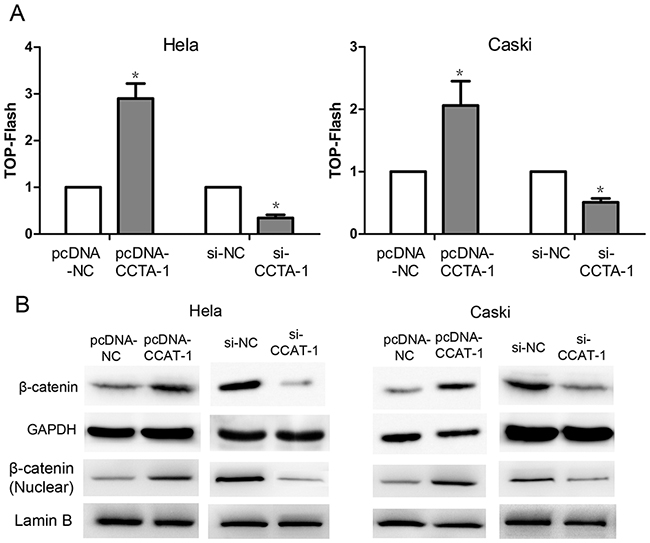 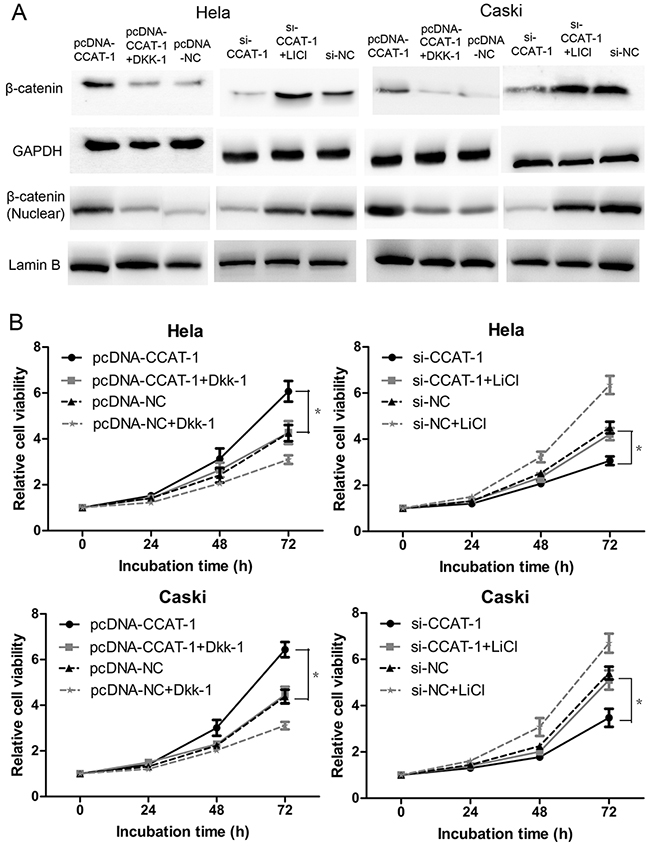 The study of lncRNAs has gained prominence in the field of gene regulation in recent years. Accumulated evidence from recently published studies suggests that aberrant lncRNA expression may be a crucial component of tumorigenesis in cervical cancer [22–24]. CCAT-1, a newly discovered lncRNA, is involved in the development of tumors in many different tissues [9–16]. However, its role in cervical cancer is unknown.

A total of 94 paired cervical cancer tissues and adjacent normal tissues were obtained from the cervical cancer patients with surgical treatment between January 2011 and May 2012. Freshly specimens were immediately frozen in liquid nitrogen and stored at -80 ° C until used. All patients did not receive any preoperative tumor-related treatment, and pathology was confirmed as cervical cancer by two pathologists. Written informed consent was obtained from each patient, and the present study was approved by the ethics committee of University. The clinical and pathological data of patients was shown in Table 1.

The lentiviral vectors with shRNA-CCAT-1 were constructed by the GenePharma Company (Shanghai, China). Briefly, the oligonucleotide encoding shRNA-CCAT-1 and negative control were annealed and inserted into the pCMV vector (GenePharma). The recombinational vectors and the packaging vectors were co-transfected into 293T cells (Invitrogen, Carlsbad, USA) with Lipofectamine2000 (Invitrogen, USA). The culture supernatants were collected at 48 hours after transfection, concentrated. The cells were divided into two groups according our objectives: infection of control virus (sh-NC); infection of shRNA-CCAT-1 virus (sh-CCAT-1). The shRNA-CCAT1 sequences used showed in Supplementary Table 1.

Cell viability was determined using the CCK8 assay according to the manufacturer’s protocol. Briefly, Cells were plated in 96-well plates in triplicate at 5×103 per well in a final volume of 90 μl. Then 10 μl CCK8 solutions was added to each well and incubated for 2h at 37 °C and 5% CO2 at each time point (0, 24, 48, 72h). After incubating, the absorbance at 450 nm was measured by an SpectraMax M5 (Molecular Devise, California, USA).

Apoptotic fractions cells were analysed by Annexin-V-FLUOS Kit (BD Pharminogen, USA) according to the manufacturer’s instructions. Annexin V and PI was added 48h after transfection and apoptotic cells were identified with a flow cytometer (FACSCalibur, BD Biosciences). The relative ratio of early apoptotic cells were counted for further comparisons.

Cells were plated at 500 per well into 6-well plates in DMEM supplemented with 10% FBS. Dishes were incubated at 37°C in a humidified atmosphere containing 5% CO2. After 7 days, cells were washed twice with PBS, fixed with formaldehyde for 30 min, stained with crystal violet (Beyotime; Shanghai, China) for 10 min, washed with ddH2O three times and then photographed with a digital camera.

HeLa and CaSki cells (2×107cells) that stably transfected with pCMV/shRNA-CCAT-1 or pCMV/shRNA-NC were re-suspended in 150 μl PBS and subcutaneously injected into the flank tissues of 5-week-old BALB/c-nu female mice, respectively. 21 days after inoculation, the animals were sacrificed, the xenografts were isolated and the weight (gram) of the xenografts was determined. The protocols for animal experiment study were approved by the Institutional Committee for Animal Research in University.

Chromatin immunoprecipitation (ChIP) assays were performed according to the EZ ChIP Chromatin Immunoprecipitation Kit (Millipore, Bedford, MA, USA). Briefly, HeLa and CaSki cells were treated with formaldehyde and incubated for 10 min to generate DNA-protein cross-links. Cell lysates were then sonicated to generate chromatin fragments of 200–300 bp and immunoprecipitated with antibodies against c-Myc (Santa Cruz Biotechnology, Santa Cruz, CA, USA) or IgG as control. The antibody-bound complex was precipitated by Protein A-Sepharose beads. The DNA fragments in the immunoprecipitated complex were released by reversing the cross-linking at 65 °C for 5 hour and purified DNA was analyzed by qRT-PCR with SYBR-Green incorporation (Applied Biosystems, Foster City, CA, USA). The ΔCt was calculated as ΔCt (normalized ChIP) = [Ct (ChIP) – Ct (Input)]. The % input was shown as 2[-ΔCt(normalized ChIP)]. The primers specific for the CCAT1 promoter containing E-box and non-E-box were shown in Supplementary Table 2.

The β-catenin reporter plasmid (TOP-flash) and its mutant control (FOP-flash) were constructed by Millipore Corporation (Massachusetts, USA). Cells were serum-starved overnight and co-transfected with 0.2 μg TOP flash or FOP flash expression plasmids and 0.1 μg pRL-TK (Renilla TK-luciferase vector; Promega, Madison, USA) using Lipofectamine 2000. The activities of both firefly and Renilla luciferase reporters were determined at 48 hours after transfection using a Dual Luciferase Assay Kit (Promega, Madison, WI, USA) according to the manufacturer’s instructions. The TOP-Flash reporter activity is presented as the relative ratio of firefly luciferase activity to Renilla luciferase activity, and the TOP/FOP ratio was used as a measure of β-catenin-driven transcription.

The following regulators of the Wnt signalling pathway were used: Wnt activators LiCl (Sigma-Aldrich, MO, USA) and Wnt antagonist Dickkopf-1 (Dkk1, PeproTech, New Jersey, USA). At 24 hours after transfection, the transfected cells were treated for 48 hours with LiCl (25mmol/L) or Dkk1 (120ng/ml). Following that, cells were collected for further experiments.

SPSS 11.0 and GraphPad Prism software was used for statistical analyses. Values were expressed as mean ± standard error. Student’s t-test was used to analyze the differences between two groups and P < 0.05 was considered statistically significant. All experiments were performed at least three times and all samples analyzed in triplicate.