Liver cirrhosis is an advanced stage of chronic liver disease and a public health issue due to its high mortality rate [1]. Hepatitis virus infection (type B and type C) is the leading etiological cause of liver cirrhosis, followed by chronic alcohol consumption. Recently, the number of patients with nonalcoholic fatty liver disease (NAFLD)- or nonalcoholic steatohepatitis (NASH)-associated liver cirrhosis has increased due to metabolic dysfunction with type 2 diabetes mellitus and dyslipidemia [2]. Hepatocyte injury due to these causes induces and enhances inflammatory necrosis or fibrosis, leading to liver cirrhosis [3, 4].

Since the liver is the major organ metabolizing fat, protein, and carbohydrates, protein-energy malnutrition and hepatic malnutrition due to dysfunction of hepatocytes is frequently noted among patients with liver cirrhosis. In this case, decreased albumin levels are due to the reduced ability to synthesize protein [5]. In patients with liver cirrhosis, increased enzyme levels leaked from hepatocytes, decreased platelet counts, prolonged prothrombin times, increased bilirubin levels due to cholestasis, etc. are clinically complicated signs and symptoms. Several indicators were proposed to estimate not only the severity of liver cirrhosis and progression of hepatic fibrosis but also the prognosis of cirrhosis based on the values from laboratory examinations and/or symptoms. Currently, the Child-Pugh score [6], FIB-4 index [7], albumin-bilirubin (ALBI) grade [8], method of end-stage liver disease (MELD) score [9], and MELD-Na score [10] are utilized clinically as predictive factors of the severity, fibrosis progression, and prognosis of liver cirrhosis patients.

Imbalanced amino acid metabolism is induced by the consumption of the essential branched-chain amino acids (BCAAs; valine, leucine, and isoleucine), which are energy substrates in muscles. Patients with liver cirrhosis therefore have a lower concentration of BCAA but a higher level of aromatic amino acids (AAAs) [11, 12]. As an evaluable indicator of energy metabolism, the BCAA-to-AAA ratio or BCAA-to-tyrosine ratio (BTR) is utilized [13]. The BTR is referred to as a decision marker of therapeutic direction for patients with liver cirrhosis in our institution, and we reported that it was a predictive factor for early-phase hepatocellular carcinoma. The survival rate in patients with a high BTR (≥ 4) is significantly greater than that in patients with a low BTR (< 4) [14].

We evaluated whether the BTR is a predictive indicator of prognosis in patients with liver cirrhosis to determine the relationship of the BTR with survival and worsening disease (occurrence of complications) in the clinical setting in a retrospective, observational cohort study. The clinical significance of the BTR was also investigated to compare it with other predictive indicators. In this study, the Child-Pugh score, FIB-4 index, ALBI grade MELD score, and MELD-Na score were employed as comparative indicators. In addition, an investigation of the effects of BCAA supplementation therapy on prognosis in patients with liver cirrhosis was conducted as an exploratory evaluation using propensity score matching [15].

Among 1,223 patients with liver cirrhosis who first visited Saiseikai Niigata Daini Hospital from February 2000 to May 2012, 741 met the selection criteria. As shown in Figure 1, 530 patients were finally selected for the study analysis in accordance with the other selection criteria of age, total bilirubin level, and etiology of liver cirrhosis. Baseline patient characteristics are shown in Table 1. 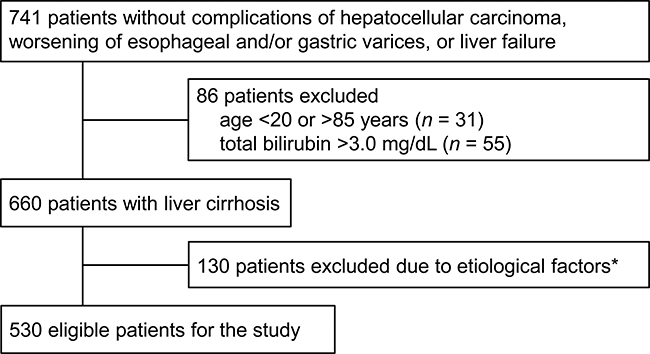 Relationship between the BTR and all events due to liver cirrhosis

Table 2: Events due to liver cirrhosis 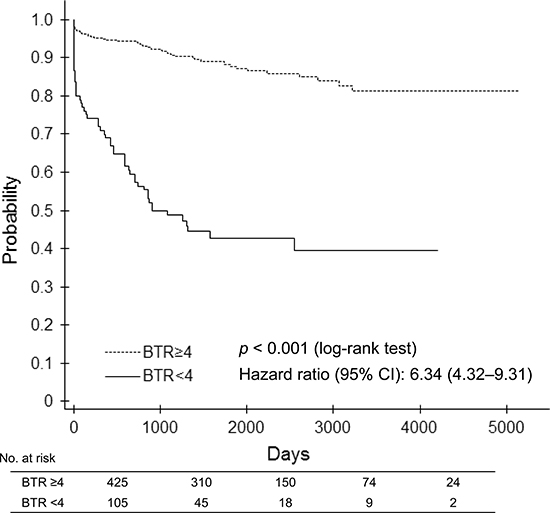 Correlation between the BTR and other predictive factors 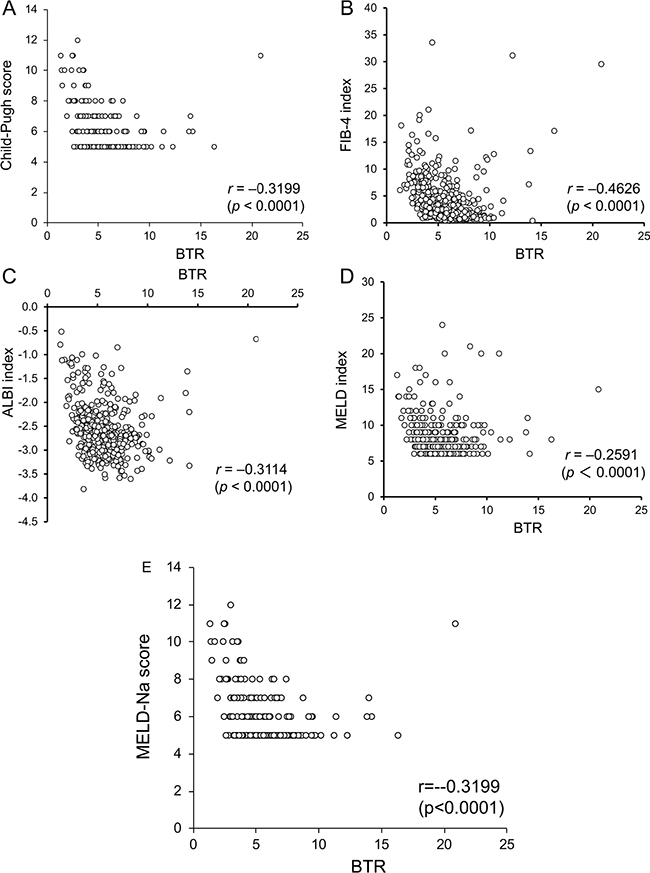 Relationship between other predictive factors and all events

The Kaplan-Meier curves for event-free survival with the categorized severity of each predictive factor (Child-Pugh score, FIB-4 index, ALBI grade, MELD score, or MELD-Na score) are shown in Figure 4. The severity category of each factor was significantly associated with event-free survival. The hazard ratio for the severity category of each factor is shown in Table 3. 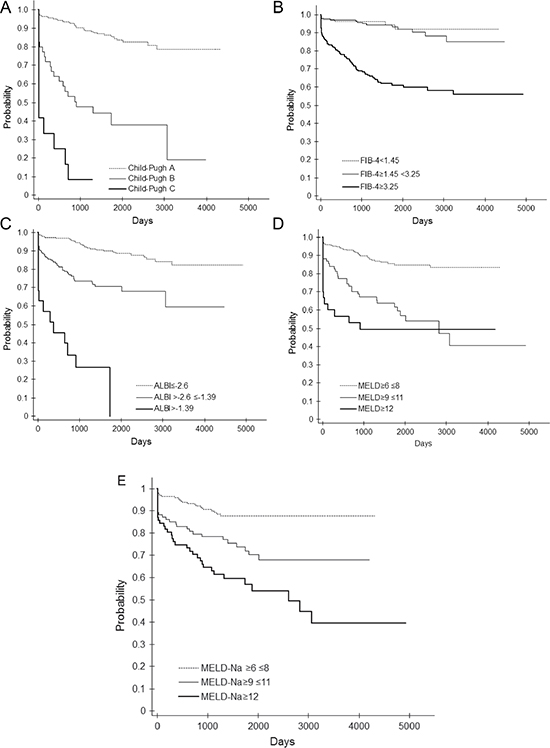 Table 3: Comparisons of hazard ratios of all events for each prognostic predictive factor for liver cirrhosis

Multivariate analysis of the prediction of event occurrence

Multivariate analysis revealed that the BTR, Child-Pugh score, Fib-4 index, and gender (female) were significantly strong contributing factors to the occurrence of all composite events (Table 4). Among independent variables, however, age was not a contributing factor.

In both the low and high BTR groups, propensity score matching was performed between patients administered BCAA supplementation therapy (BCAA+ group) and corresponding patients who were not (BCAA– group). Patient characteristics at baseline were similar between the BCAA– and BCAA+ groups, as shown in Table 5.

Several disease severity evaluations based on values from laboratory tests are clinically utilized due to their low cost and repeatability. The Child-Pugh score is based on clinical symptoms (ascites and encephalopathy), bilirubin and albumin levels, and prothrombin time [6]. The MELD score is calculated from creatinine and bilirubin levels and the International Normalized Ratio of prothrombin time [9]. It was reported that the Child-Pugh and MELD scores are good predictors of the prognosis of liver cirrhosis patients in the clinical setting, although the MELD score is superior to the Child-Pugh score because it does not involve clinical symptoms [17]. Since the sodium level itself is an independent predictive factor of liver cirrhosis prognosis, the MELD-Na score including the sodium level is also utilized [18]. The ALBI grade calculated from albumin and bilirubin levels is considered to be a prognosis predictor like the Child-Pugh score in patients with hepatocellular carcinoma [19]. The FIB-4 index is scored based on age, AST and ALT levels, and platelet count [7] and was also reported to be a prognosis predictor [20]. The present study also found that these indexes predicted the prognosis of liver cirrhosis.

As described above, theses indexes consist of multiple factors. This study mainly evaluated whether the BTR could be employed to predict prognosis, since protein-energy malnutrition is induced by lower metabolism of amino acids in advanced liver cirrhosis. Also, BTR is considered a simpler index than other indexes, since BTR can be calculated by only amino acids ratio by one time measurement of blood sample Event-free survival in liver cirrhosis patients with BTR ≥ 4 was significantly longer than that in patients with BTR < 4, when the cut-off value in the BTR was set at 4 as in a previous report [14]. Since the disease status of liver cirrhosis at the cut-off of each index may not be the same, direct comparison of the Kaplan-Meier curves is not appropriate. Accordingly, no comparison of correlations between the BTR and other predictive factors was performed. Significant, but not strong, correlations were found, however. It is considered that this phenomenon may be due to heterogeneous phenotypes of liver cirrhosis. Although the BTR was evaluated as a predictive index for patients with hepatocellular carcinoma [14, 15], this study revealed that the BTR may be effective index for predicting the occurrence of complications in patients with liver cirrhosis which is a pre-stage of hepatocellular carcinoma.

The multivariate analysis of all composite events as a dependent variable in the study patients indicated that the BTR, Child-Pugh score, and FIB-4 index as well as gender (female) were significant factors affecting prognosis. This indicates that multiple predictive factors should be employed for the estimation of prognosis in patients with liver cirrhosis, because multiple promoting factors are associated with prognosis.

The medical records and information of sequential patients who were first diagnosed with liver cirrhosis at Saiseikai Niigata Daini Hospital from February 2000 to May 2012 were analyzed. The inclusion criteria for extracting data were: 1) the BTR value was measured at the first visit; 2) BCAA supplementation was not administered prior to BTR measurement; 3) the final outcome was assessable; 4) there were no complications of hepatocellular carcinoma, worsening of esophageal and/or gastric varices or liver failure (ascites, edema, or hepatic encephalopathy); and 5) patients were aged from 20 to 85 years at the first visit. Patients whose total bilirubin level was ≥ 3.0 mg/dL were excluded. The etiological factors of liver cirrhosis were limited to hepatitis C and hepatitis B virus infection, autoimmune hepatitis, primary biliary cirrhosis, idiopathic portal hypertension, NASH, or alcoholic hepatitis, with other etiological factors excluded.

The first date of BTR measurement was defined as baseline, and the period until the first occurrence of liver cirrhosis-related events (death, worsening of esophageal and/or gastric varices, hepatocellular carcinoma, and liver failure) from the date of BTR measurement was determined. As the primary endpoint, event-free survival was compared between patients with BTR < 4 (low BTR group) and with BTR ≥ 4 (high BTR group). The secondary endpoint was the event-free survival rate in the two groups. The Child-Pugh score, FIB-4 index, ALBI grade, MELD score, and MELD-Na index were employed as comparable factors since they are clinically utilized as predictors of severity and fibrosis in liver cirrhosis. To investigate the clinical significance of the BTR for predicting prognosis in patients with liver cirrhosis, a single correlation of the BTR with the predictive factors above was evaluated. Since the normal range of the BTR is reported as 4.41–10.05, the cut-off value was employed as 4 in this study.

In addition, patients who were treated with and without BCAA supplementation were selected among patients analyzed in this study by propensity score matching to investigate event-free survival based on the BTR value (< 4 or ≥ 4) at baseline in matched patients as an exploratory evaluation. For propensity matching, gender, age, BTR, Child-Pugh score, FIB-4 index, ALBI grade, MELD score, and MELD-Na score were used as covariates. An oral nutritional supplement for liver failure or BCAA preparation was administered.

The medical records and information were made anonymous prior to analysis to prevent individual patients from being identified. Descriptive data are presented as the mean ± standard deviation for continuous variables and as counts and percentages for categorical variables, unless otherwise specified. Sample size estimation was not performed due to the retrospective observational analysis of existing medical records and information. Event-free survival rates in the two groups based on the BTR value (< 4 or ≥ 4) were compared using the Kaplan-Meier method and log-rank test. Hazard ratios of all composite events between the two groups were determined with the Cox proportional hazards model. For the six predictive factors, the Kaplan-Meier method and Cox proportional hazards model were similarly performed for each. Multivariate analysis of all composite events as a dependent variable was performed with the BTR, Child-Pugh score, FIB-4 index, ALBI grade MELD Na score, gender, age, and etiological factors as independent variables. Relative frequencies of background parameters were compared using Fisher’s exact test, Wilcoxon rank-sum test, and χ2 test. Statistical analysis was performed at Satt Co., Ltd. (Tokyo, Japan) using SAS ver.9.4 (SAS Institute, Cary, NC, USA) with the two-sided test. A p value of less than 0.05 was considered to represent a statistically significant difference.

It is important to assess the severity of prognosis in patients with liver cirrhosis. The BTR is a convenient factor to estimate prognosis in the clinical setting and it is a useful parameter for judging the timing of interventional treatment with BCAA supplementation in liver cirrhosis.

This study was funded by EA Pharma Co., Ltd. under contract, but the company was not involved in the planning, implementation, analysis, or publication of the study results.