Inflammation plays an important role in cancer progression. In this study, we aimed to investigate the prognostic value of the systemic inflammatory biomarkers in hepatocellular carcinoma (HCC) patients undergoing curative resection. Data from 271 HCC patients who underwent curative resection in Zhongshan Hospital between 2008 and 2011 were included. Kaplan-Meier survival analysis showed that gamma-glutamyltransferase (GGT) and lymphocyte-to-monocyte ratio (LMR) were significantly associated with overall survival(OS) and time to recurrence(TTR). We created a systemic inflammation score (SIS) basing on preoperative serum GGT and LMR. Low SIS was also significantly associated with increased OS and TTR. Univariate and multivariate analyses revealed the LMR, GGT and SIS were independent predictors for OS and TTR. The predictive ability of the SIS, as assessed by area under the receiver operating characteristic curve, was 0.682 (95% CI, 0.618-0.746) for OS, which was higher than GGT and LMR. In conclusion, low preoperative LMR and high preoperative GGT were associated with a poor prognosis in HCC patients after hepatectomy. Our results confirmed that the SIS qualifies as a novel prognostic predictor of HCC patients after hepatectomy.

Liver cancer is one of the most common human malignancies and most primary liver cancers occurring worldwide are hepatocellular carcinoma (HCC) [1]. Surgery is the only potentially curative treatment option for patients who have resectable HCC. Unfortunately, even after surgery, the 5-year overall survival (OS) rate is estimated to 50% and the 5-year recurrence rate exceeds 70% [2, 3] .Thus, it is crucial to explore and identify biomarkers for predicting the prognosis in HCC patients after surgery.

Systemic inflammatory response is increasingly recognized to play decisive roles at different stages of tumor development, including initiation, promotion, malignant conversion, invasion, and metastasis [4]. Previous studies reported the systemic inflammatory response was associated with cancer progression [5]. Recently there has been increasing interest in improving cancer prognostication using inflammatory biomarkers. The neutrophil-to-lymphocyte ratio (NLR) and platelet-to-lymphocyte ratio (PLR), have both been demonstrated to be prognostic markers for patients with various types of tumors [6-14]. Previous studies of hematologic malignancies suggested that an increased LMR indicate a good prognosis [15, 16]. There have been a few reports focusing on the prognostic significance of LMR in patients with solid tumors, including gastric [17], colon [18], bladder [19, 20], renal [21] and lung cancers [22].

Gamma-glutamyltransferase (GGT) plays an important role in the metabolism of glutathione. GGT was investigated as a liver enzyme and a high level of serum GGT has been usually deemed as an alert sign for potential liver disease clinically. Recently, some studies suggested elevated GGT was a promising biomarker for poor OS of HCC patients who underwent hepatic resection [23], radiofrequency-ablation treatment [24] or transcatheter arterial chemoembolization [25].

In this study, we created a systemic inflammation score (SIS) basing on preoperative serum GGT and LMR. It may serve as a better prognostic predictor for clinical outcome in HCC patients after hepatectomy. We conducted this retrospective study in a large cohort of HCC patients undergoing potentially curative resection, attempting to investigate the prognostic value of the systemic inflammatory biomarkers in HCC patients undergoing curative resection.

The optimal cut-off value for LMR

The optimal cut-off value of LMR was determined by the receiver operating characteristic (ROC) curve analysis for OS. The cut-off value was 4.5 when OS was employed as end-point for LMR, which yielded the largest sensitivity and specificity. LMR was stratified into < 4.5 or ≥4.5 for subsequent analyses. 170 patients (62.7%) and 101 patients (37.3%) were included in the low-LMR group ( < 4.5) and high-LMR group (≥4.5), respectively.

Associations of LMR, GGT and SIS with clinicopathological characteristics

Table 1: Association of LMR,GGT and SIS with clinicopathological characteristics

Analysis of the prognostic impact of LMR, GGT and SIS 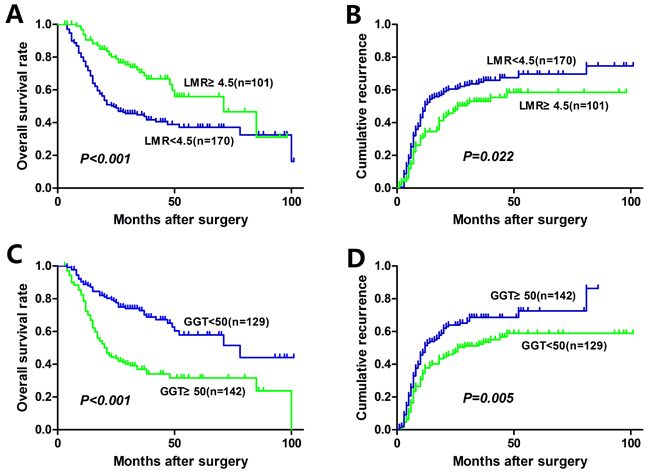 Figure 1: Kaplan-Meier analyses for overall survival and cumulative recurrence rate of HCC patients based on preoperative LMR and GGT.

Figure 2: Kaplan-Meier analyses for overall survival and cumulative recurrence rate of HCC patients based on SIS.

1Analysed as a continuous variable.

Comparation of predictive ability of SIS and other inflammatory parameters

Predictive ability of the SIS was compared with other inflammatory parameters(GGT, LMR, NLR and PLR) by ROC curves (Figure 3). The discrimination ability was compared by the area under the receiver operating characteristic curve(AUC) for OS (Table 3). The AUC for the SIS was 0.682 (95% CI, 0.618-0.746), which was the strongest factor among inflammatory parameters (GGT, LMR, NLR and PLR) for predicting survival in patients with HCC.

Table 3: Comparation of predictive ability of SIS and other inflammatory parameters 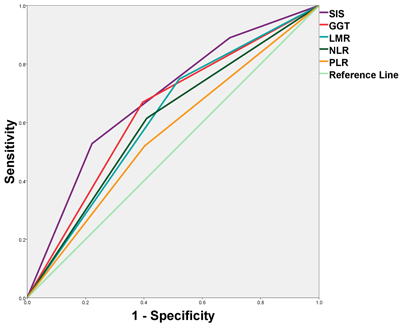 Figure 3: Predictive ability of the SIS was compared with other inflammatory parameters by ROC curves.

Links between cancer and inflammation were first described in the nineteenth century. Nowadays, increasing evidence indicating systemic inflammatory response plays an important role in cancer progression [5]. Markers based on systemic inflammation, such as the NLR and PLR, have been reported to be useful in predicting the outcome of cancer patients [6-13]. In the present study, a novel systemic inflammation score (SIS) was constructed based on preoperative serum GGT and LMR. The data indicated GGT, LMR and SIS were independent predictors of survival and recurrence for patients with HCC after hepatectomy. Our results revealed that an elevated preoperative LMR was significantly associated with increased OS and TTR, whereas an elevated preoperative GGT were significantly associated with inferior OS and TTR. The exact reason for the association of elevated preoperative GGT or low LMR with poor prognosis in malignant tumor patients remains largely unclear.

Firstly, our study identified GGT as a prognostic marker for patients with HCC after hepatectomy. GGT is a key enzyme that plays an important role in the metabolism of glutathione, and it is also correlated with tumorigenesis [26]. GGT may induced DNA instability and subsequent oncogenesis, leading to the death of normal liver cells or the loss of normal liver function [27]. A series of studies have suggested that serum GGT was a marker of oxidative stress [28]. The pro-oxidant activity of GGT may contribute to the persistent oxidative stress described in cancer and modulate processes involved in tumor progression [29]. As a consequence, recent studies suggested elevated GGT was a promising biomarker for poor OS of HCC patients who underwent hepatic resection [23], radiofrequency-ablation treatment [24] or transcatheter arterial chemoembolization [25]. The molecular mechanisms of the association between GGT and poor prognosis of HCC need further study.

The second part of the study was successful in defining the utility of the LMR as a prognostic indicator in HCC patients after hepatectomy. Lymphocytes can exert an anti-tumor effect by inhibiting tumor cell proliferation and migration [5, 30]. As a consequence, a low lymphocyte count might result in a weak antitumor reactions and could predict a poor clinical outcome [31]. On the other hand, monocytes are a type of white blood cells that can further differentiate into a range of tissue macrophages and dendritic cells [32]. Monocytes were reported to promote tumorigenesis through local immune suppression [33]. In addition, monocytes can differentiate into tumor associated macrophages (TAMs), which mostly promote tumor growth and may be obligatory for angiogenesis, invasion, and metastasis [34]. Macrophage could also promote the growth, migration and metastasis of tumor cells by releasing some soluble factors [5,35]. Previous studies indicated elevated macrophage content was associated with poor clinical outcome [36-38]. Hence, an elevated absolute monocyte count may predict poor prognosis in tumor patients. LMR, a combination of lymphocytes and monocytes, may represent a balance in host immunity against malignancy has enhanced prognostic value. Previous studies of hematologic malignancies suggested that an increased LMR promised a good prognosis [15, 16]. More recently, some reports indicated the prognostic significance of LMR in patients with solid tumors, including gastric [17], colon [18], bladder [19, 20], renal [21] and lung cancers [22].

Our results indicated the predictive ability of GGT and LMR is stronger than other inflammatory parameters (NLR and PLR). Therefore, we combine these two prognostic markers to construct SIS, assuming that SIS might have a combined predictive effect of GGT and LMR. SIS is a convenient biomaker because serum GGT and complete blood count are routinely measured before surgery in our clinical practice. In the future, basic research may provide an understanding of its molecular mechanisms that may become potential therapeutic targets.

We assessed the association of LMR, GGT and SIS with clinicopathological characteristics. It is worth mentioning that GGT were significantly associated with male, ALT and AST in our study, which was in line with previous studies. Previous studies has demonstrated a sex difference in GGT level [39, 40] and it has been suggested that the lower level of GGT for women is likely to be of a physiological nature. Moreover, fatty liver occurred more frequently in men than women and the distributions of concentrations of liver enzymes differ between men and women [41]. Recommended cutoffs of abnormal liver enzymes were significantly higher for men than women [42].

The present study had several limitations that require discussion. Firstly, the present study was a retrospective design with single-center and missing variables or selection bias are possible because of its retrospective nature. Secondly, peripheral blood cell counts were performed only once, which might cause bias. In addition, C-reactive protein (CRP) was not gathered in our analyses because it was not routinely measured in our clinical practice. Large-scale prospective studies are warranted to substantiate and validate our results.

A total of 271 patients with HCC who underwent curative hepatic resection at the Liver Cancer Institute of Zhongshan Hospital (Fudan University, Shanghai, China) between 2008 and 2011 were enrolled after informed consent. Patients who underwent preoperative therapy, such as transarterial chemoembolization, radiofrequency ablation or percutaneous ethanol injection, were excluded from this study. Ethical approval was obtained from the research ethics committee of Zhongshan Hospital, and written informed consent was obtained from each patient.

Data are expressed as the mean ± standard deviation. ROC curve analysis was applied to determine the optimal cut-off level for LMR as predictor of OS. Prediction accuracy was evaluated with area under the ROC curve. The associations of LMR, GGT and SIS with clinicopathological characteristics were examined using the χ2 test or Fisher exact test. The Cox proportional hazards regression model was applied to perform univariate and multivariate analyses, and those variables that achieved statistical significance in the univariate analysis were entered into the multivariable analysis. The Kaplan-Meier method with log-rank test was used to compare survival curves. All statistical analyses were performed using the Statistical Package for Social Sciences version 19.0 (SPSS Inc, Chicago, IL). A two-sided P-value of < 0.05 was considered statistically significant in all tests.

The statistical methods of this study were reviewed by Xinping Zhao from Department of Health Statistics and Social Medicine, School of Public Health, Fudan University, Shanghai.

29. Corti A, Franzini M, Paolicchi A, Pompella A. Gamma-glutamyltransferase of cancer cells at the crossroads of tumor progression, drug resistance and drug targeting. Anticancer Res. 2010; 30:1169-1181.

38. Balkwill F, Charles KA, Mantovani A. Smoldering and polarized inflammation in the initiation and promotion of malignant disease. Cancer Cell. 2005; 7:211-217.