Background: The p16Ink4a is not a surrogate marker for high-risk human papilloma virus (HPV) genotypes but indicates better prognosis in vulvar squamous cell carcinoma patients. Our recent study confirmed substantial mismatch between p16Ink4a and high-risk HPV-status as well as revealed that p16Ink4a-overexpression itself is an independent prognostic factor for vulvar cancer.

Aim: To determine significance of the tumor infiltrating immune cells and p16Ink4a–status for better outcome of patients with vulvar cancer.

Vulvar cancer represents 3-5% of all gynecological malignancies with an incidence rate 1-2 per 100,000 women per year. The most common type is vulvar squamous cell carcinoma (vSCC) [1]. There are two distinct aetiopathogenic pathways involved in the induction of vSCC. The first one involves the presence of transforming infections with high-risk (hr) HPV- genotypes, the latter arises in the absence of HPV during chronic dermatosis [2]. Intracellular release of viral oncoproteins E6 and E7 disturbs regulation of the cell cycle and coexists with nuclear and cellular accumulation of cyclin-dependent kinase inhibitor p16Ink4a [2, 3].

Although demonstration of overexpression of p16Ink4a serves as a surrogate marker for a transforming infection with HPV-high-risk genotypes in cervical cancer [4], the largest up to date cohort study revealed that p16Ink4a is not a substitute marker for (hr) HPV-DNA in vSCC [5].

Meta-analysis of 2309 vSCC cases indicated that p16Ink4a status correlates with better prognosis of vulvar cancer patients [6]. It was also shown that patients with cancers presenting p16Ink4a-overexpression are very sensitive to radiotherapy and this could explain their better outcome [7].

Indeed, our recent study on 85 vSCCs confirmed substantial mismatch between p16ink4a and HPV-status and revealed independent prognostic significance exclusively for p16Ink4a -overexpression. This study has also revealed that the overexpression of p16Ink4a predicts improved prognosis for patients who have undergone adjuvant radiotherapy [8].

The impact of p16Ink4a -status on vulvar cancer immune surveillance as represented by tumor-infiltrating lymphocytes (TILs) and tumor associated macrophages (TAMs) is unknown and potentially could be correlated with the outcome of patients.

TILs are considered to be a manifestation of the host immune response against cancer cells [9] and consist of two major populations of effector cells: the CD8+ T lymphocytes and the natural killer (NK) cells [10]. Another subset of TILs is composed of CD4+ T lymphocytes which play a central role in initiating, maintaining and modulating anticancer immune responses [11, 12]. Functional analysis of CD4+ T cells has recognized CD25+FOXP3+CD4+ Tregs cells which have been found to suppress the tumor specific immune response [13, 14].

Another component of local immunologic response exerting inhibitory functions of other immune cells are TAMs (CD68+ cells). Their function depends on the release of inhibitory cytokines or reactive oxygen species (ROS) [16].

Crucial for cytotoxic function of all immune cells are granzymes, a family of serine proteases. Granzyme B (GZB) is one of the most commonly present in the cytotoxic lymphocytes and the GZB-induced cell death has been regarded as a primary mechanism utilized by adaptive (CD8+) as well as innate (NK/NKT) effectors to eliminate cancer cells [17, 18].

To look for the immunological explanation of better prognosis of p16INK4a-positive patients we aimed to compare local immune surveillance (represented by TILs: CD8+, CD4+, FOXP3+, CD56+; TAMs: CD68+, and GZB+ cells) in cases having tumors with various p16INK4a -status as well as to analyze the correlation of these immunomodulating factors with the survival in both p16Ink4a -negative and p16Ink4a -positive groups of vSCC patients.

Characteristics of patients with opposed p16INK4a and (hr) HPV-DNA statuses

Comparison of clinicopathological features of patients having primary tumors: negative and positive for p16INK4a and (HR) HPV-DNA revealed lack of differences between groups.

Table 1: Comparison of Clinicopathological features between patients having primary tumors: negative and positive for p16 and (HR) HPV-DNA 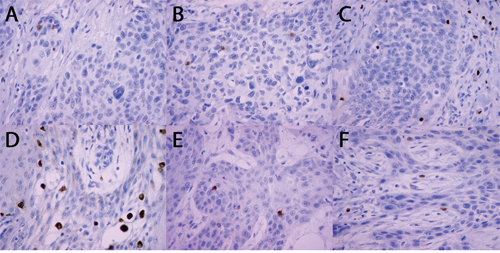 (hr) HPV-status did not impact the infiltration of TILs. Detailed data on the number of particular subtypes of immune cells within cancer nests in relation to p16INK4a and (hr) HPV status of the primary tumor includes Table 2.

Table 2: Number of TILs within cancer nest in general cohort and in relation to p16 as well as (hr) HPV-DNA status of the primary tumor

To look for the explanation of the prognostic significance of p16Ink4a-overexpression within vulvar cancer tissue [6, 8] we compared at first common clinicopathological features between patients with opposed p16Ink4a status. Keeping with the findings of other studies [24, 25], our results confirmed that p16Ink4a -overexpression is not correlated with any clinicopathological feature potentially influencing survival of vulvar cancer patients (Table 1).

Further, we decided to assess the relation of p16Ink4a status of the primary tumor with immunomodulating factors.

We found that p16Ink4a-negative cancer nests were more infiltrated by effectors of adaptive immune response (CD8+, CD4+ T lymphocytes) and demonstrated higher cytotoxic activity of immune cells (GZB+) while p16Ink4a status has no impact on number of innate effectors (CD56+) and regulatory (FOXP3+, CD68+) infiltrates. Interestingly, (hr) HPV-status did not impact the infiltration of subtypes of TILs (Table 2).

Lower TILs indices may reflect lower local immunogenicity of p16Ink4a-positive tumors. The varying extent of enrichment of p16Ink4a-positive and -negative tumors in the number of CD8+ and CD4+ cells may be a consequence of diverse expression of tumor associated antigens (TAAs), MHC antigens, costimulatory molecules, and the statuses of antigen-presenting cells (APCs) [16].

Higher cytotoxic activity of the immune system (GZB+ infiltrates) was found in p16Ink4a-negative cancer nests. These nests were more intensely infiltrated only by CD8+ cells, therefore, granzyme B-dependent elimination of tumor cells seems to be major action of CD8+ cells rather than CD56+ in vulvar cancer surveillance. Interestingly, with exception of CD68+ cells, all other subtypes of TILs infiltrating p16Ink4a-negative cancers did not influence the clinical outcome of patients. High density of CD68+ cell infiltrates was correlated with disseminated disease and predicted shorter survival in this group. The current literature supports the hypothesis that TAMs play an active role in both tumor immunosuppression and promotion of tumor growth [16].

Within p16Ink4a-positive tumors which were less infiltrated with adaptive immune effectors (CD4+, CD8+ lymphocytes), two subtypes of immune cells (CD4+ and CD56+) were found to be correlated with longer overall survival (OS).

Recent studies suggest that, besides the granzyme-mediated lysis, the CD56+ cells may induce apoptosis in a broad variety of tumor cells by means of expression of several TNF-family ligands [30].

However, most of the data were retrieved from our previous studies, originality of current report is supported by completely new study project and design. The impact of p16Ink4a-status on tumor immune infiltrates has never been analyzed before. This study provides a new insight into immune surveillance on vSCC as for the first time demonstrates that p16Ink4a-overexpression impacts the number of TILs and TAMs at primary site.

Lack of prognostic significance of adaptive immune effectors and regulatory T cells described by others [31] was previously confirmed by our group for nearly the same cohort [19, 20]. All these findings have suggested no place for immunotherapy for vulvar cancer patients.

In the light of current results such a conclusion should be reconsidered as we have proven that from the immunologic point of view, vSCC seems to consist of two separate entities dependent on p16Ink4a status with different subtypes of prognostic immune infiltrates.

The immunohistochemical staining for all antibodies: p16, CD8, CD4, FOXP3, CD68, CD56, and GZB was performed according to the following protocol. Four μm-thick serial sections were cut, deparaffinized and subjected to a heat-induced epitope retrieval step before being incubated with the primary antibodies. Sections were immersed in Target Retrieval Solution (pH 6,0; Dako Cytomation, Denmark) and heated in a pressure cooker. The slides were incubated for 90 minutes with the primary antibodies.

The reaction was visualized by the Novolink polymer detection system (Novocastra Laboratories). Appropriate positive (normal tonsil for CD4, CD8, FOXP3, granzyme B, CD56, CD68, HPV-related cervical cancer for p16) and negative controls (the primary antibody was replaced with normal mouse IgG at an appropriate dilution) were included for each case. The results of immunohistochemistry were evaluated by two independent pathologists who did not have any knowledge of the clinical data. The concordance rate between their observations was over 96%.

The degree of immune cell infiltration was determined in more than 10 high-power (x400) microscopic fields for each tissue sample. Then, five areas with the most dense lymphocyte distribution (hot spots) were selected and micro-photographs were taken. The quantitative analysis was performed with Multiscan 14.2 software. The number of CD8+, CD4+, FOXP3+, CD68+, CD56+ and GZB+ cells was counted exclusively within primary tumor cancer cell nest. For each case the mean index of particular subtype of intraepithelial (IE) TILs per single high power field was counted and then statistically analyzed.

Evaluation and classification of p16ink4a immunostaining

The evaluation of the p16ink4a immunostaining was performed on 3 different staining patterns: negative, focal, and diffuse staining. For statistical purposes, p16 immunostaining was classified as positive or negative. Staining for p16ink4a was considered positive only in cases with a strong diffuse and continuous nuclear/cytoplasmic expression of p16ink4a within the cancer nests (focal and weak diffuse staining were considered negative) [8].

Tissue dissection and DNA preparation as well as mucosal HPV DNA amplification and genotyping were detailed for this cohort in our recent study [8].

Overall survival curves were estimated by the Kaplan-Meier method and compared by the two-sided log-rank test. For uni- and multivariate analyses the Cox proportional-hazards regression model was used to explore the impact of individual variables on survival.

P-values of <0.05 were regarded as significant in all of the analysis. All analyses were performed with the statistical software Statistica 10 (Stat Soft Inc.).

Different immune cells infiltration and diverse prognostic significance of subtypes of TILs discovered in patients with p16INK4a -positive and negative cancers suggest that local immune surveillance and immunologic effects contributing to clinical outcome depend on cancer p16INK4a status. Our results suggest that not HPV infection itself but p16INK4a overexpression contributes to shaping of the tumor microenvironment and p16INK4a -status should stratify patients for separate immunotherapeutic approaches in vSCC.