APC hypermethylation for early diagnosis of colorectal cancer: a meta-analysis and literature review

Colorectal cancer (CRC) is one of the most common types of cancer worldwide and results from the accumulation of genetic and epigenetic alterations in colonic mucosa cells, which ultimately leads to colorectal adenoma, advanced to invasive and metastatic CRC. Unfortunately, the prognosis of CRC in late stages is still poor and the search of novel diagnostic and prognostic biomarkers is highly desired to prevent CRC-related mortality. During last decade, epigenetic alterations have been reported to play an important role in many cancers initiation, progression, and metastasis [1, 2]. DNA methylation within CpG island in promoter region of genes is associated with the loss of gene expression and is observed in many types of cancers including CRC. Adenomatous polyposis coli (APC), a suppressor gene, is located at chromosomal band 5q21-q22 and consists of 15 exons. APC was discovered by genetic linkage analysis in familial adenomatous polyposis (FAP) and was reported by Kinzler [3], Nishisho [4], Joslyn [5] and Groden [6]. Recently APC is thought of as a negative regulator in Wnt/beta-catenin signaling pathway. Loss of APC function leads to the destabilization and degradation of beta-catenin, and the nuclear accumulation of beta-catenin results in the activation of T-cell factor/LEF target gene and initiates tumorgenesis [7, 8]. APC along with several other inactivated genes plays a prognostic indicatory role in squamous cell and adenocarcinoma of esophagus, bladder and lung cancers [9]. In the past two decades, APC promoter hypermethylation was frequently observed in sporadic and familial CRC. However, the association between clinicopathological significance and APC methylation was under investigated. The present article aims to summarize the most recent findings concerning the use of epigenetic (mainly related to DNA methylation) biomarkers for CRC diagnosis, progression, and response to treatment.

36 publications were identified by the search method as described above. Eleven of those were excluded due to laboratory studies, non-original articles (review), or studies irrelevant to the current analysis. Eventually, there were 24 studies included in the final meta-analysis as shown in Figure 1. 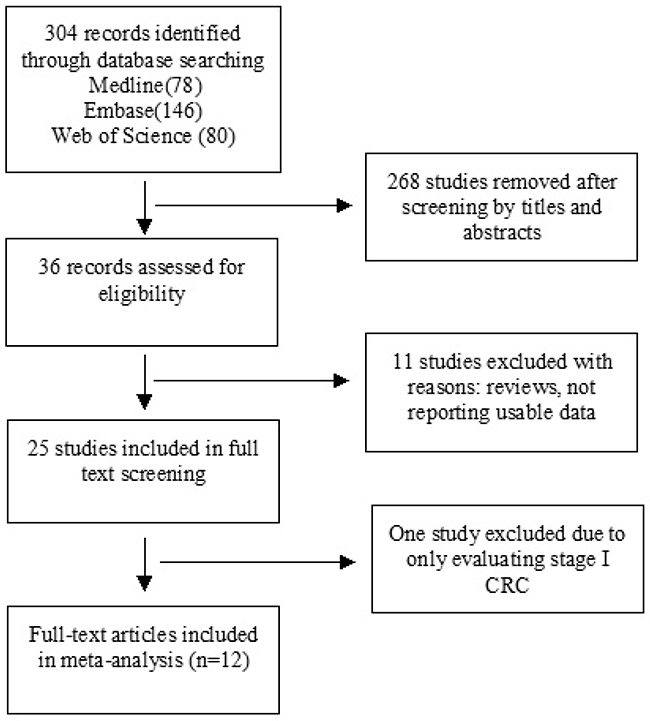 24 studies published from 2004 to 2015 were eligible for meta-analysis. A total of 1396 samples including CRC, colorectal adenoma and normal control tissues from Greece, Iran, Sweden, Vietnam, China, South Korea, Japan, UK, Kashmir, Czech Republic, Australia, Netherland, Germany, Norway, and USA were included in the analysis. Their basic characteristics are summarized in Table 1.

The correlation of APC hypermethylation with clinicopathological features

1. The inactivation of APC through promoter hypermethylation in adenoma and CRC.

2. APC promoter hypermethylation was not associated with grade and stage of CRC.

3. There was no statistically significant association between APC methylation status and other clinical parameters, including tumor location, gender and smoking status of CRC patients.

Figure 7: Forest plot for the correlation of APC hypermethylation and location of CRC.

Figure 8: The frequency of APC hypermethylation was similar in male and female CRC patients.

Figure 9: Plot for the relationship of APC hypermethylation and smoking status of patients with CRC. 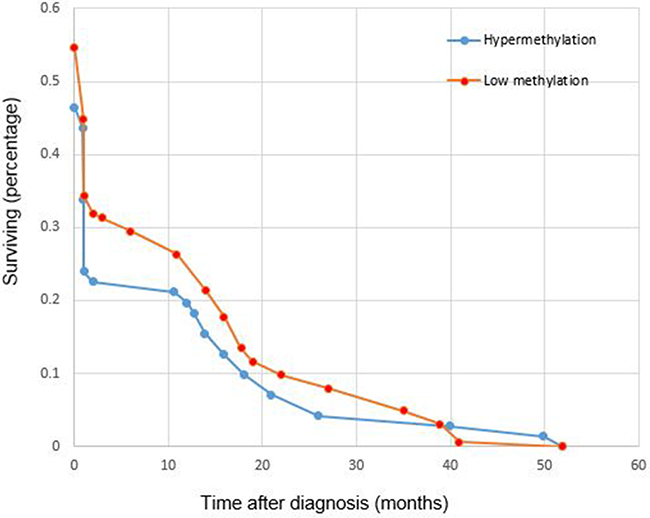 To minimize the effect of confounders, a sensitivity analysis, in which one study was removed at a time, was conducted to assess the result stability. The pooled ORs were not significantly changed, indicating the stability of our analyses. The funnel plots demonstrates no obvious asymmetry (Figure 11A-11H), suggesting the absence of publication biases in the meta-analysis of APC hypermethylation and clinicopathological features. 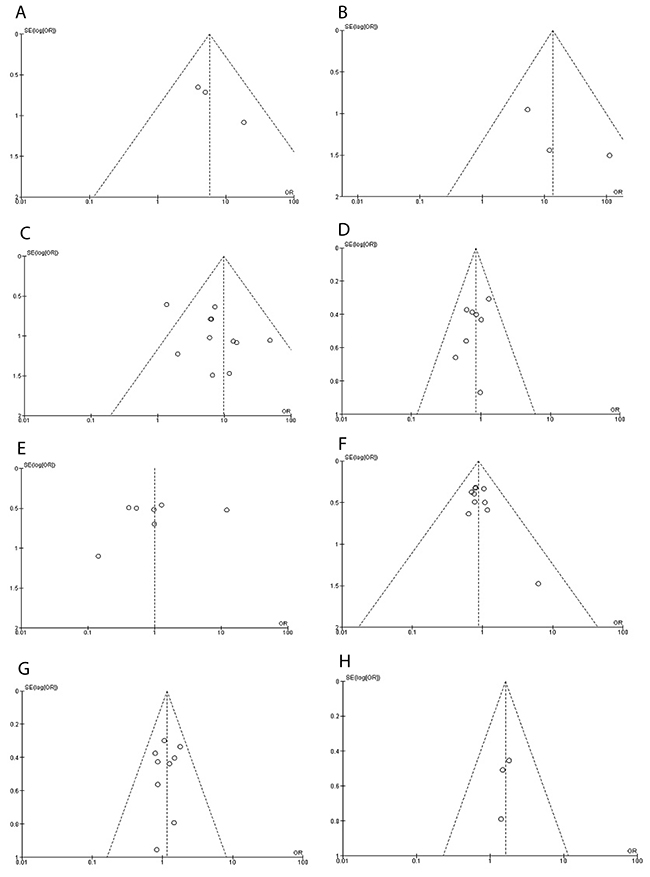 CRC is thought to develop from adenomatous polyps following the accumulation of mutations which includes the activation of oncogenes and the inactivation of tumor suppressor genes [11–15]. Tumor suppressor genes associated with CRC include APC, p53, BRAF and DCC [10, 15], and the loss of APC has been observed in approximately 70-80% of CRC [16–19], but the association between APC promoter methylation and clinicopathological significance in CRC is unclear. The current study systematically reviewed all published evidence before July 2016 and synthesized data from three studies and 196 adenoma samples using a meta-analysis. Our result indicated that the APC promoter is 5.76 times more frequently hypermethylated in adenoma than in normal colorectal tissue. In addition, the frequency of APC hypermethylation in CRC stage I was 13.42 times higher than in normal colorectal tissue. Patients with early-stage CRC could expect a long survival with surgery alone, but about 50% stage III and 25% stage II will relapse and need adjuvant chemotherapy [20]. Therefore, APC hypermethylation as a valuable early diagnostic marker could contribute to making the decision whether or not to accomplish chemotherapy. Ding et al published a meta-analysis of the association between APC promoter methylation and colorectal cancer, in which the APC promoter hypermethylation has not been analyzed in early-stage CRC.

We pooled 12 studies and included 762 CRC samples and 343 normal colorectal tissues, and the data demonstrated the frequency of APC hypermethylation in CRC was 9.8 times higher than in normal colorectal tissues; the heterogeneity was 43%. We removed three studies that caused higher heterogeneity (the heterogeneity was 83%, OR was 4.35, 95% CI was 1.56-12.12). One of the three studies (Xu et al.) reported low frequency of APC methylation in CRC (7.7%) compared to other studies (APC methylation rate arranged from 17.9% to 62.8%), two studies (Dimberg at al. and Michailidi et al.) reported high rate of APC methylation (65.3% and 85.7%) in normal colorectal tissues compared to other studies (APC methylation rate arranged 0-25%). The frequency of APC hypermethylation was similar between CRC and adenoma (data not shown), this result is consistent with previous study [21]. Our results suggest that APC promoter hypermethylation is an early event during colorectal carcinogenesis. Previous evidence suggest that APC methylation is not a “second hit” in two hit model of APC mutation in tumor [22]. This explains why APC promoter hypermethylation was an early event during the development of CRC. As the changes in APC promoter hypermethylation are reversible, demethylation with drug could delay carcinogenesis and progression of CRC. Previous studies showed that adenoma formation in APC min/+ was inhibited by 5-aza-deoxycitidine, a demethylation agent [23]. In addition, Eads et al demonstrated that the expression of full-length Dnmt3b1 enhanced the number of colon tumors in APC min/+ mice by approximately twofold and increased the average size of colonic microadenomas [24, 25]. Taken together, APC is a potential drug target for the development of personalized therapy in patients with CRC; further investigation is required in future.

Among the included studies, the frequency of APC methylation have varied greatly from 17.9% to 62.8%. This phenomenon maybe due to ethnic differences, different PCR primers used in the detection, as well as cancer heterogeneity. According to recent classification system, CRC is classified into two major groups: 1) hypermutated cancers with either microsatellite instability due to defective mismatch repair or ultramutated cancers with DNA polymerase epsilon proofreading mutations; 2) non-hypermutated, microsatellite stable cancers with a high frequency of DNA somatic copy number alterations, which showed common mutations in APC, TP53, KRAS, SMAD4 and PIK3CA. APC methylation is present more often in the first group of tumors with microsatellite-stable compared to the second group with microsatellite instability [26–29]. In addition, the APC methylation was inversely associated with TIMP3, TP53 and BRAF methylation [27]. Previous publications reported that APC was less frequently mutated alone, more commonly mutated with KRAS, TP53, PIK3CA and SMAD [22, 27], suggesting that the APC mutation occurs early in carcinogenesis, the alterations of other genes were involved during the transition from adenoma to carcinoma. APC methylation combined with the mutation of other genes could be a valuable biomarker for diagnosis and prognosis of CRC. Further study is necessary to substantiate this issue.

Consistent results were shown in sensitivity analyses, indicating the stability of our analyses. All funnel plots did not show any obvious asymmetry, suggesting there is no publication bias in the meta-analysis. This study has several potential limitations. First, selection bias may exist since only publications in English and Chinese were included in the present study, which could affect the accuracy of results in certain extent. Caution should be taken when our findings are interpreted. Second, the possibility of information, selection biases and unidentified confounders could not be completely excluded because all of the included studies were observational. Third, our results showed that there is no significant correlation between APC methylation and gender, smoking behavior of CRC patients as well as tumor locations; since the power of the study is small, further evaluation with a larger number of samples is required in future.

In summary, our meta-analysis indicates that APC promoter hypermethylation is an early event of carcinogenesis of CRC, and APC methylation combined with the mutation of other genes could be a valuable biomarker for diagnosis and prognosis of CRC. APC promoter methylation is not significantly associated with overall survival in patients with CRC. APC is a potential drug target for development of personalized therapy.

We performed this meta-analysis in accordance with the Preferred Reporting Items for Systematic Reviews and Meta-analysis (PRISMA) statement [30]. We searched the database of Medline, Web of science, and Embase up to July, 2016 without language limitations. The following items were used for searching: APC, adenomatous polyposis coli, methylation, neoplasm, tumor, colorectal carcinoma, and CRC. A manual search using references from retrieved articles was performed for additional pertinent studies. We chose the most complete study to avoid duplication when the same populations were reported in several publications.

Exclusion criteria were: 1) lack of sufficient data on APC methylation and clinicopathological features in CRC, 2) reviews, case report, conference abstract and expert opinion and letters, 3) all publications regarding in vitro studies.

Review Manage 5.3 from the Cochrane Collaboration was used for data analysis. Odds Ratio with 95% confidence intervals (CIs). This statistic was complemented with the I2 statistic, which quantifies the proportion of the cumulative variation across studies that is due to heterogeneity rather than chance. When heterogeneity was not an issue (I2 values <50%), a fixed effect model was used to calculate parameters. When there was substantial heterogeneity (I2 values ≥50%), a random-effects model was used to pool data and attempt to identify potential sources of heterogeneity based on subgroup analyses. Two sided statistical tests and p-value were used.

The presence of publication bias was assessed by funnel plots of logarithm of odds ratios versus their standard errors [32].

TL, HW, YZ, and YC contributed substantially to the study and design, collection of data, and analysis of data. YZ, XW, and XZ contributed substantially to the acquisition, analysis, interpretation of data and performed the statistical analysis. TL and SD have been involved in the drafting and revision of the article. SD has full access to all data and the final responsibility for the decision to submit the article for publication. All authors read and approved the final manuscript.

This work is supported by the Key research and development program of Shandong Province, 2016GSF201018 (TL). The funding institution does not have any roles in the study design, data collection, or analysis.

31. Stang A. Critical evaluation of the Newcastle-Ottawa scale for the assessment of the quality of nonrandomized studies in meta-analyses. Eur J Epidemiol. 2010; 25:603-605.