In the human genome, only 1-2% of genes encode proteins [8], and the rest of the genome encodes a large amount of non-coding RNAs (ncRNA) [9].

LncRNAs are a class of RNA molecules that are longer than 200 nucleotides and cannot be translated into proteins [10]. Research has shown that lncRNAs are involved in a variety of biological processes, such as development [11], apoptosis [12, 13], proliferation and differentiation [14], and carcinogenesis [15–17]. Recent studies have also found that lncRNAs are abnormally expressed in a variety of cancers, including breast cancer [18], lung cancer [19], hepatocellular carcinoma [20], and gastric cancer [21]. Therefore, lncRNAs are regarded as potential biomarkers and may lead to a new treatment era for various cancers [22, 23]. HOXA cluster antisense RNA 2 (HOXA-AS2) is an lncRNA located between the HOXA3 and HOXA4 genes in the HOXA cluster. Recent studies indicated that HOXA-AS2 represses apoptosis in NB4 promyelocytic leukemia cells treated with trans retinoic acid [24], promotes the proliferation of gastric cancer via P21/PLK3/DDIT3 [25] and accelerates tumorigenesis of hepatocellular carcinoma [26]. However, the role of HOXA-AS2 in breast cancer development, invasion and metastasis remains unknown.

Many studies have shown that lncRNAs can serve as a competing endogenous RNAs (ceRNAs) to regulate microRNAs (miRNAs) [27, 28]. CeRNAs play a post-transcriptional regulatory role in miRNA distribution on their targets. MiRNAs are a class of non-coding RNA of approximately 20 nucleotides and regulate gene and protein expression by targeting the 3’ untranslated region (UTR) of mRNAs [29, 30]. Previous studies have shown that miRNAs are involved in post-transcriptional regulation of various biological processes [31–33]. In addition, miRNAs serve as tumor suppressor genes or oncogenes and play important roles in the occurrence and development of human cancers [31, 34]. In this study, we aimed to explore the ceRNA mechanism of HOXA-AS2 though miR-520c-3p and revealed the functional relevance of miR-520c-3p and HOXA-AS2 in breast cancer.

The expression level of HOXA-AS2 was detected by qRT-PCR in 38 pairs of breast cancer tissues (Tumor) compared with corresponding adjacent normal tissues (Normal), and we found that HOXA-AS2 expression was significantly up-regulated in tumor tissues compared with normal tissues (Figure 1A). Next, we found that high expression of HOXA-AS2 was corrected with distant metastasis (n = 16) (*P < 0.05, Figure 1B). In addition, the relationships between HOXA-AS2 expression and clinical characteristics in 38 patients with breast cancer were analyzed, and we found that expression was significantly associated with invasion (P = 0.0005), lymphatic metastasis (P < 0.0001), distant metastasis (P < 0.0001), and TNM stage (P < 0.0001) but not related to age (Table 1). Further analysis showed that HOXA-AS2 was significantly higher in breast cancer cell (MDA-MB-231, MDA-MB-453, and MCF-7) lines than that of the non-metastatic human mammary epithelial cell line MCF-10A (P < 0.05, Figure 1C). Moreover, high HOXA-AS2 expression was associated with poor overall survival compared to that of patients with low HOXA-AS2 (P < 0.05, Figure 1D). These results suggested that HOXA-AS2 might be an oncogene in breast cancer. 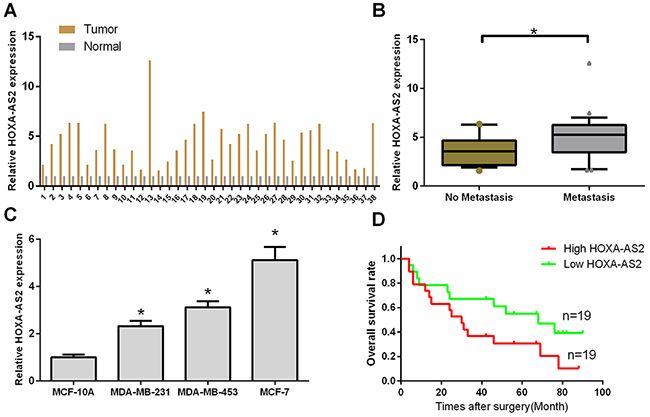 Silencing of HOXA-AS2 inhibits the progression of breast cancer cells 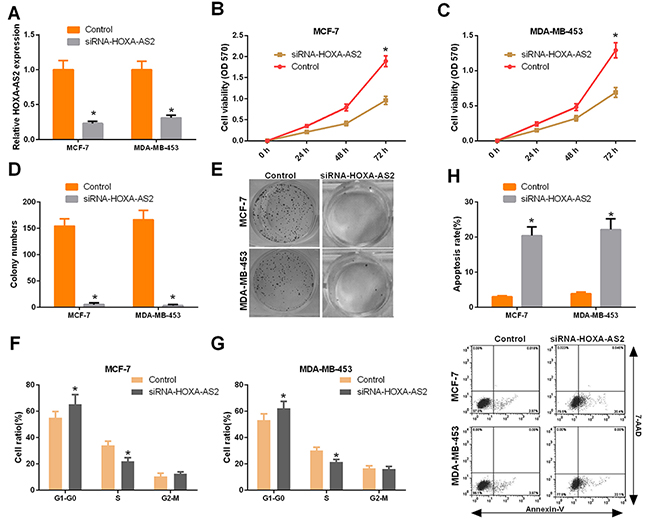 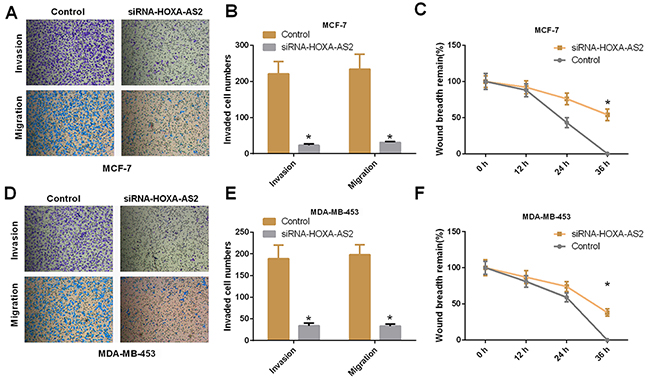 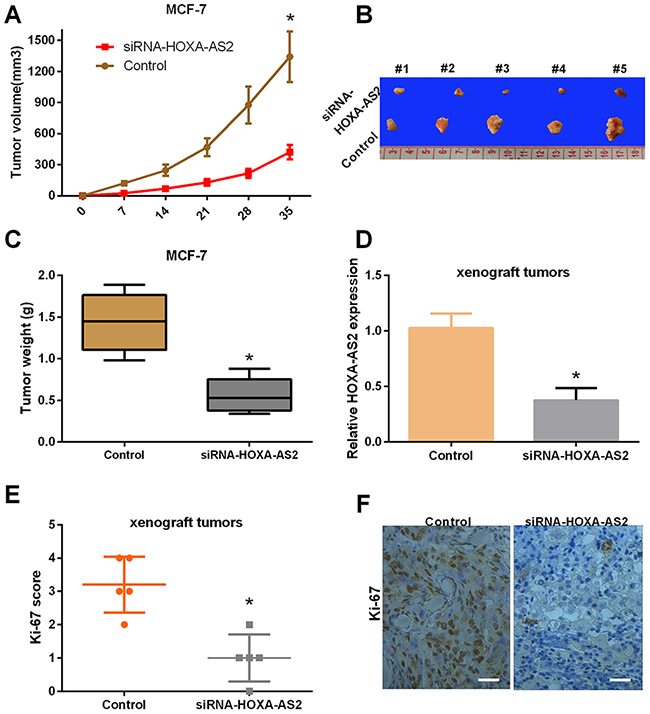 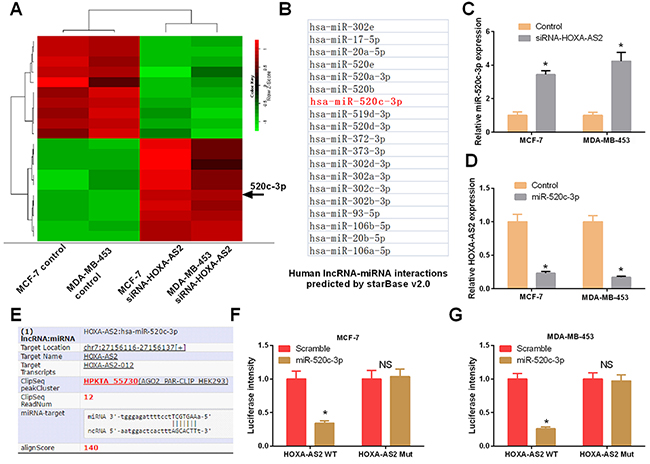 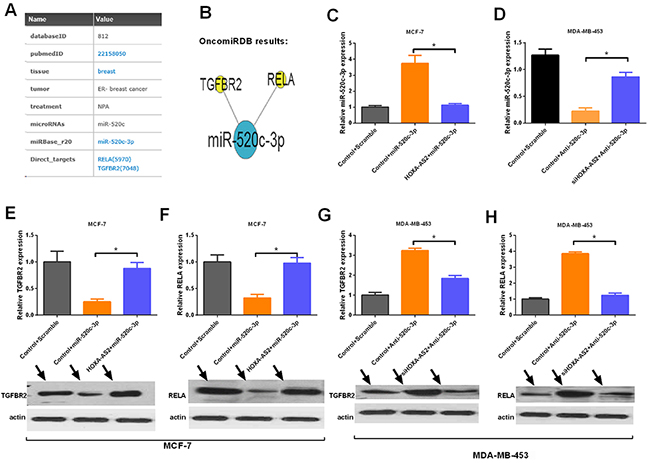 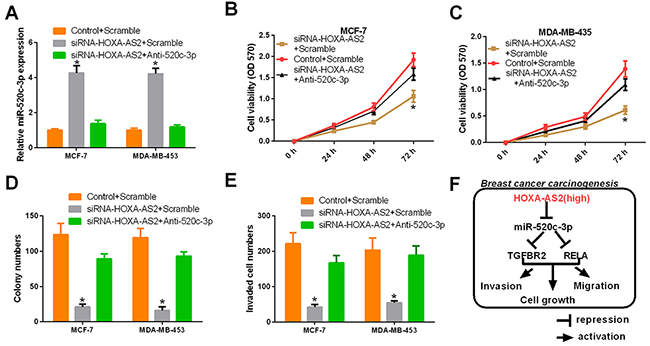 Previous studies have indicated that miRNAs have important biological functions in breast cancer, such as cell proliferation, apoptosis, differentiation, inflammation, and metastasis [45, 46]. In our study, we found that miR-520c-3p showed low expression and plays important roles in human breast cancer, which indicates it may be a potential biomarker in the diagnosis and treatment of breast cancer. Our findings enhanced the knowledge of miRNAs in this field. Studies have also indicated that lncRNAs potentially affect target gene levels as ceRNAs through miRNA response elements (MREs) [27]. At present, a number of lncRNAs that serve as ceRNAs have been shown to be involved in the occurrence and development of various diseases [47, 48]. In our study, we performed a microarray to screen the HOXA-AS2-regulated miRNAs in breast cancer. StarBase v2.0 was also used to predict the binding sites between HOXA-AS2 and the regulated miRNAs. Then, dual-luciferase reporter assays confirmed that miR-520c-3p, screened by microarray and bioinformatics analyses, was a HOXA-AS2-regulated miRNA in breast cancer cells. Functional studies demonstrated that HOXA-AS2 alters proliferation and invasion of breast cancer by regulating miR-520c-3p.

In the present study, we also explored the mechanism of the HOXA-AS2/miR-520c-3p axis in breast cancer and detected the influences of HOXA-AS2 on the targets (TGFBR2 and RELA) of miR-520c-3p. We found that HOXA-AS2 controls the expression of TGFBR2 and RELA by acting as a miR-520c-3p sponge. A previous study indicated that TGF-β has a dual effect (inhibiting early-stage tumor growth but promoting tumor metastasis) in cancer development [49]. TGF-β2, which belongs to the TGF-β family, contributes to the recruitment and activation of SMAD family members that regulate gene expression [50]. Our research showed that HOXA-AS2/miR-520c-3p may participate in breast cancer tumorigenesis through the TGF-β signaling pathway. Another target of miR-520c-3p, RELA (p65, NF-κB3), is a member of the transcription factor nuclear factor kappa B (NF-κB) family. RELA was shown to regulate the growth and malignancy of various tumors by regulating pro-inflammatory and pro-survival genes [51]. Our results demonstrated that the HOXA-AS2/miR-520c-3p axis controls the expression of RELA, suggesting a role for the HOXA-AS2/miR-520c-3p in breast cancer through the NF-κB signaling pathway.

In conclusion, our study found the following: a) HOXA-AS2 was up-regulated in breast tissues and cell lines. b) HOXA-AS2 expression was associated with invasion, lymphatic metastasis, distant metastasis, TNM stage, and postoperative survival of breast cancer. c) Silencing of HOXA-AS2 significantly suppressed carcinogenesis of breast cancer. d) HOXA-AS2 acts as a molecular sponge for miR-520c-3p and regulates its targets. The HOXA-AS2/miR-520c-3p regulatory network may shed light on tumorigenesis in breast cancer and may contribute to the development of novel diagnostic and treatment approaches for breast cancer.

A total of 38 patients who were diagnosed with breast cancer and had undergone a mammectomy between 2009 and 2015 in the Affiliated Tumor Hospital of Harbin Medical University were enrolled in the study. No patients received radiotherapy or chemotherapy before surgery. The study was approved by the Ethics Committee of the Affiliated Tumor Hospital of Harbin Medical University. Written informed consent was obtained from all patients in this study. The histological diagnosis of breast cancer was based on the World Health Organization (WHO) criteria. All samples (cancer and paired noncancerous tissues) were stored in liquid nitrogen with RNALater (Qiagen) immediately after resection and saved until RNA extraction.

MCF-7 and MDA-MB-453 cells were treated with HOXA-AS2 siRNAs at a final concentration of 50 nM, plasmid vectors, and 50 nM of miR-520c-3p or anti-miR-520c-3p oligonucleotides using Lipofectamine 3000 (Invitrogen, Carlsbad, CA, USA) according to the manufacturer’s protocol. The siRNA duplexes targeting HOXA-AS2 were designed and synthesized by Qiagen (Hilden, Germany). The miR-520c-3p and anti-miR-520c-3p oligonucleotides were purchased from GenePharma (Shanghai, China). Plasmid vectors (HOXA-AS2 and empty vector) for transfection were extracted using a DNA Midiprep kit (Qiagen, Hilden, Germany). The full-length complementary DNA of HOXA-AS2 was synthesized by GenScript (GenScript.com) and cloned into the pcDNA3.1 (+) vector (Invitrogen) according to the manufacturer’s instructions.

MCF-7 and MDA-MB-453 cells (5 × 104 cells/well) were seeded in 24-well plates and co-transfected with miR-520c-3p and wild type or mutant HOXA-AS2, along with a Renilla plasmid (RL-SV40) using Lipofectamine 3000 (Invitrogen). The pRL-CMV Renilla vector served as an internal control. Cell extracts were harvested 48 hrs post-transfection, and a Dual-Luciferase Reporter Assay System (Promega) was used to measure the reporter gene activities according to the manufacturer’s instructions. All experiments were performed in triplicate and repeated twice.

The wound healing assay was used to study cell migration. The treated MCF-7 and MDA-MB-453 cells (1 × 106 cells) were seeded in 6-well plates and cultured in complete medium for 12 hrs at 37°C in a 5% CO2 incubator. A pipette tip was used to make a straight scratch, and the images of the scratch were obtained as baseline. Cells were cultured at 37°C for 48 hrs. The suspended cells were gently washed off twice with PBS. Photographs were obtained every 12 hrs for the next 36 hrs.

The cell invasive and migratory abilities were evaluated using transwell assays. For migration assays, 200 mL of treated MCF-7 and MDA-MB-453 cells (5 ×105) with serum-free medium was seeded in the top 24-well Transwell chamber (8-μm pore; Corning, Painted Post, NY, USA) of the inserts, and 600 μL of complete medium was added to the lower chamber. After 24 hrs of incubation, the migratory cells were fixed, stained in 0.1% crystal violet solution, and counted under a confocal microscope. For invasion assays, the invasive cells were detected by Transwell Matrigel (BD Biosciences, San Diego, CA, USA) invasion assays. Matrigel (BD Biosciences, San Diego, CA, USA) was pre-coated onto the upper chambers. Other experimental procedures were similar to the migration assay.

This study was approved by the Institutional Committee for Animal Research and performed according to the national guidelines for the care and use of laboratory animals. MCF-7 cells were transfected with HOXA-AS2 siRNAs and controls, and cells (1×106 cells/mouse, 0.2 ml) were subcutaneously injected into the armpit of 6-week-old BALB/c athymic nude mice. Tumor volume and weight were measured at 0, 7, 14, 21, 28, and 35 days. The mice were euthanized 5 weeks after injection, and photographs of excised tumors were obtained. The excised tumors were then used into further analyses.

Immunohistochemistry was performed on paraformaldehyde-fixed paraffin sections. The TMA blocks were then cut into 4 μM sections for immunostaining. The sections were incubated with Ki-67 (#9027; Cell Signaling) antibody overnight at 4°C. Histostain-Plus 3rd Gen IHC Detection Kit (Invitrogen Co., San Diego, CA) was applied for 30 mins to visualize the positive signals.

MCF-7 and MDA-MB-453 cells were transfected with HOXA-AS2 siRNAs and control for 48 hrs. An Agilent human miRNA microarray (V2) was used to determine the expression levels of miRNAs according to the manufacturer’s instructions. First, total RNA was extracted using TRIzol (Invitrogen) and dephosphorylated with calf intestine alkaline phosphatase (Amersham). The dephosphorylated RNA was denatured by DMSO (Sigma). Second, the labeled miRNAs were re-suspended in hybridization buffer (Agilent) and hybridized with a microarray (Agilent Technologies). Finally, images were analyzed using Agilent Feature Extraction software (version A.9.5.3; Agilent Technologies).

Differences between groups were analyzed by Student’s t-test using SPSS 21.0 software (SPSS Inc., Chicago, IL, USA). Survival curves were evaluated by the Kaplan-Meier method and compared by the log-rank test. P < 0.05 was considered statistically significantly. Data are shown as the mean ± standard deviation (SD), and all experiments were performed in triplicate.

This work was supported by the National Natural Science Foundation of China (No. 81372839).