Background: Advance directives are a sensitive issue among traditional Chinese people, who usually refrain from mentioning this topic until it is imperative. Medical decisions for cancer patients are made by their families, and these decisions might violate patients’ personal will.

Objectives: This study aimed to examine the acceptance of advance directives among Chinese cancer patients and their families and patient participation in this procedure and, finally, to analyze the moral risk involved.

Results: While 246 patients and their family members refused official discussion of an advance directive, the remaining 166 patients and their families accepted the concept of an advance directive and signed a document agreeing to give up invasive treatment when the anti-cancer treatment was terminated. Of these, only 24 patients participated in the decision making. For 101 patients, anti-cancer therapy was ended prematurely with as many as 37 patients not told about their potential loss of health interests.

Materials and Methods: Participants were 412 adult cancer patients from 9 leading hospitals across China. An advance directive was introduced to the main decision makers for each patient; if they wished to sign it, the advance directive would be systematically discussed. A questionnaire was given to the oncologists in charge of each patient to evaluate the interaction between families and patients, patients’ awareness of their disease, and participation in an advance directive.

An advance directive (AD) is a common procedure for patients with terminal cancer to ensure they die with dignity [1]. In the best of circumstances, the patient, family, and healthcare providers have discussed the treatment options and made the final decision [2, 3]. The concept of an AD is common in Australia, Canada, and the United Kingdom. However, in Confucian areas, there is no system or law to support the decision making of patients [3, 4]. An end-of-life decision is a sensitive issue in China; people, including family members and patients, usually refrain from mentioning this topic until it is imperative [5]. Thus, it is valuable to investigate the practice of ADs in the Chinese population as it might make it easier for Chinese patients in Western countries to make such decisions.

Medical decision making in Western countries is largely individualized. However, this decision-making mode is not prevalent in Confucian areas and the Arab world, including China [6, 7]. In mainland China, medical decision making for patients with malignant disease largely relies on the patients’ families. This mode has always been criticized for its latent moral risks in that the interests of vulnerable patients might not be fully met or, even worse, might be violated by their family members [6, 8, 9]. However, few studies have systematically illustrated the risks of AD decision making in Confucian areas.

Thus, in this multicenter study, we aimed to systematically examine the acceptance of ADs in Chinese cancer patients and their families, to examine patients’ participation in this procedure, and, finally, to analyze the moral risk in the AD decision making for cancer patients in China.

A total of 246 patients and their family members rejected systematic discussion of AD; the majority (95.5%) of these were under anti-cancer treatment. An additional 166 patients or their families accepted the concept of an AD and signed an AD to give up invasive treatment. This decision was made shortly after termination of anti-cancer therapy. Correlational analysis revealed that patients living in villages and who were subordinate members in their families tended to accept ADs. Financial status, gender, age, patients’ educational background, and decision-making style did not influence the acceptance of an AD (Table 1).

Table 1: The characteristic of patients accepting AD or not

Most cancer patients were excluded from the AD decision making

Of the 166 patients who finally signed an AD, only 24 patients participated in the decision making and signed it according to their own will; the remaining 142 patients were excluded from this decision-making process. Correlational analysis revealed that patients with a better financial situation, living in cities, and with superordinate status in their families tended to participate in the AD discussion, as did those who usually made medical decisions themselves. Nearly all the patients deciding on their own AD knew their entire situation, including diagnosis and prognosis (Table 2).

Table 2: The characteristic of cancer patients’ participation in AD decision making or not

Table 3: The characteristic of cancer patients terminating anti-cancer therapy following the recommendation of doctor or not

Of the 101 patients who prematurely ended anti-cancer therapy, as many as 37 were not told of the rejection of formal medical advice as well as their potential loss of medical interest. None of the 37 patients participated in the AD discussion. Like participation in medical decisions, patients with superior status in the family and those usually making decisions for themselves tended to be given full information about the less optimal medical decision and the consequent prognosis (Table 4).

Table 4: The characteristic of cancer patients aware or not of their premature terminating anti-cancer therapy

Chinese do not like to talk about death, partly due to their superstition that talking about death would cause bad luck and to the shortage of death education in China [12, 14]. The concept of an AD was widely accepted by Chinese oncologists who had received modern education in medicine. However, in most cases, discussion of an AD was not accepted by the family and patient until there was no chance for the patient to receive any anti-cancer therapy or there was a high risk of sudden death of the patient. When an AD had to be discussed, patients living in villages tended to follow the traditional Chinese culture and preferred to die in their family temples. Thus, they more actively accepted the concept of ADs and spent the last days of their lives at home. The superordinate family members tended to make the AD decision for the subordinate members to protect them from fear of death. Summarily, having an AD was widely accepted among Chinese cancer patients and their families; however, it would not be discussed until there was no chance to control cancer.

Most Chinese cancer patients were excluded from the discussion of AD. Only 14.5% participated in the AD decision making. Death education is scarce in traditional Chinese culture and the modern educational system [5, 12, 14, 15], leading to overreacting behavior and mental frustration inpatients with terminal illnesses. As a solution to this difficult situation for patients, Chinese family members always protected the patients from hearing their end-of-life message [5]. Modern Chinese people, mainly living in cities, who have received better education from Western culture tended to participate more in the AD discussion. Moreover, patients with a superordinate family position presented an increased tendency to be involved in their AD discussion. This might be explained by their strong will to fulfill their responsibility to their family members. Despite the above 2tendencies, Chinese families played an important role in making decisions regarding withdrawal of life-sustaining treatment in end-of-life care and preferred to delay providing the information to cancer patients.

The present study indicated that the family-based mode of AD decision making might lead to potential moral risk. The premature ending of anti-cancer therapy without telling the patient the truth might be against the health interest of cancer patients and shorten their survival. Thus, the doctors shall improve the education ofthe patients and their family members about their rights and the idealism of hospice care. Besides, the government should give more financial support to cancer patients under palliative treatment.

A total of 412 consecutive adult cancer patients under palliative therapy were included in this study between September 1, 2013, and December 31, 2013, from 9 departments of oncology in local leading general hospitals or cancer centers in 5 big cities across China, including the Third Affiliated Hospital, Cancer Center, and the Sixth Affiliated Hospital of Sun Yat-sen University as well as the Third Affiliated Hospital of Guangzhou Medical University, the Second Affiliated Hospital of GuangDong Pharmaceutical University in Guangzhou, the Fifth Affiliated Hospital of Sun-Yat-sen University in Zhuhai, Dongguan People’s Hospital in Dongguan, the First Hospital of Yueyang in Yueyang, and the First Hospital of Shanghai in Shanghai. The following patients were excluded: those whose lives were directly threatened by acute diseases other than cancer and associated complications, those whose cancer diagnosis lacked pathological proof, those who were incompetent in making medical decisions, those with acute leukemia, and those who underwent radical treatment. Additionally, 25 patients were excluded due to a lack of substantial necessary information. This study was approved by the Clinical Ethics Review Board at all the hospitals included in this study. Informed consent was obtained at the time of admission.

In most of the hospitals in mainland China, ADs consisted primarily of life supporting therapy and invasive procedures, such as tracheal intubation, mechanical ventilation, cardiopulmonary resuscitation, intensive care unit admission, hemodialysis, and surgery under general anesthesia. Conservative treatments considered AD elements in the Western world, such as transfusion, vasopressor/inotropic, broad-spectrum antibiotics, tube feeding, parenteral fluids, parenteral nutrition, painkiller, simple diagnostic tests, and supplemental oxygen for dyspnea, are not included in ADs in mainland China. An AD was informally mentioned to the main decision makers when the patient was under anti-cancer therapy; if they wished to sign an AD, an AD would be systematically introduced. Routinely, an AD was officially recommended to the main decision makers for each patient (mainly family members and, in limited cases, the patient) when anti-cancer therapy was terminated or there was a high risk of sudden death of the patient (Figure 1). 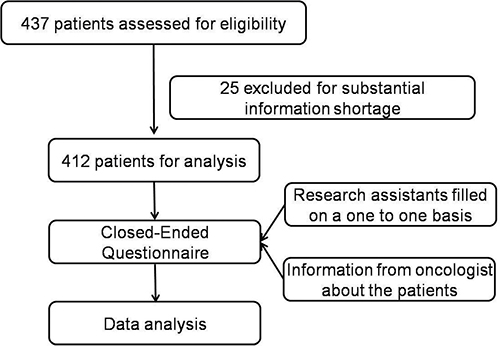 Data considered to be associated with decision making by all the oncologists involved in this study were collected as follows. Medical insurance types were classified into 2 categories: local (medical reimbursement covered more than half of the medical expense) and nonlocal (medical reimbursement covered less than half of the medical expense). Education levels were categorized as follows: ordinary (received at least high school education) and functionally illiterate (received primary education or less). Family status was ranked as superordinate (major decision maker in the family) and subordinate (not the major decision maker in the family). The main living environment of patients was defined as the place where the patients had grown up and worked for most of their lives; this was dichotomized into city and countryside. Decision-making modes were classified into 2 conditions: patient superiority (oncologists discussed planned treatments with patients, and patients made decision themselves) and family superiority (oncologists discussed planned treatments with family members, and patients were not involved in final decision making). The above information about the patients was determined by their doctors in charge.

We compared the variables in different groups using chi-square analysis. The criterion for statistical significance was set at α = .05, and all P-values were based on 2-sided tests. SPSS (version 20.0; SPSS Inc, Chicago, IL) was used for all statistical analyses.

In summary, this study illustrated that ADs were not widely accepted among Chinese people. Most Chinese cancer patients were excluded from the discussion of an AD. Premature ending of anti-cancer therapy induced acceptance of ADs. Death education might improve cancer patients’ participation in AD discussions and finally help with fulfilling their personal will.