Aims: Assessing the diagnostic performances of APRI and FIB-4 using age as a categorical marker.

Methods: 822 chronic hepatitis B (CHB) patients were included. Using METAVIR scoring system as a reference, the performances of APRI and FIB-4 were compared between patients aged≥30 and patients aged<30 years.

Conclusions: Evaluation of the diagnostic performances of APRI and FIB-4 should take age into consideration.

Globally, an estimated 240 million patients have chronic hepatitis B virus (HBV) infection, which is intermediate to high prevalence in Asia-Pacific region [1]. In China, the HBV seroepidemiology has already shown a decrease in the prevalence of HBsAg, from 9.75 % in 1992 to 7.18 % in 2006 [1, 2]. Chronic hepatitis B (CHB) patients with liver fibrosis were at increased risk of cirrhosis, and cirrhotic patients were at increased risk for liver de-compensation, hepatocellular carcinoma (HCC) and death [3]. A sustained suppression of HBV replication was associated with improvement in liver histology [4, 5]. According to CHB guidelines, patients with significant fibrosis or cirrhosis should receive antiviral therapy [1, 6-8]. Besides, evaluation of liver fibrosis has an important role in prognosticating patients and determination of candidacy for surveillance for HCC. Therefore, the assessment of liver fibrosis needs to be considered in patients in whom liver fibrosis or cirrhosis is suspected.

Liver biopsy is the gold standard to assess the degree of liver fibrosis, but limited by its high cost, invasiveness, and risk of complications [9]. Non-invasive fibrosis tests based on serum indices or ultrasound are increasingly used for evaluating liver fibrosis. The transient elastography performed with FibroScan is recognized as an excellent fibrosis test because of its high diagnostic performance, non-invasive procedure, and can be undertaken in outpatient [10]. However, the FibroScan is limited by the high cost of equipment and fee for maintenance [11]. Serum fibrosis indices such as the aspartate transaminase (AST) to platelet ratio index (APRI) and fibrosis index based on the 4 factors (FIB-4) consist of indirect markers such as alanine transaminase (ALT), AST and platelet count, which are associated with lower costs, do not require particular expertise in their interpretation, and can be performed in an outpatient setting [11]. Currently, APRI and FIB-4 have been used widely in clinical practice. However, one of the research gaps is to evaluate the impact of other factors on the diagnostic performances of APRI and FIB-4.

According to the American Association for the Study of Liver Diseases (AASLD) guidelines for the treatment of CHB, in patients who acquired HBV infection at birth or in early childhood, the average age of transitioning from immune-tolerant to immune-clearance phases is 30 years [6, 12]. According to the European Association for the Study of the Liver (EASL) guidelines for CHB, liver biopsy or even therapy should be considered in patients over 30 years of age and/or with a family history of HCC or cirrhosis [7]. According to the Asian-Pacific Asociation for the Study of the Liver (APASL) guidelines for CHB, assessment of liver histology is usually recommended to determine the stage of fibrosis in patients older than 30 years and with a high viral load [1]. In CHB patients, age over 30 years is associated with higher likelihood of liver fibrosis than those under 30 years [6, 13]. It was hypothesized that age might be an influence factor on the diagnostic performances of APRI and FIB-4. This study evaluated the impact of age on the diagnostic performances of APRI and FIB-4 in 822 CHB patients.

Table 3: AUROCs of APRI and FIB-4 for significant fibrosis and cirrhosis in patients≥30 years 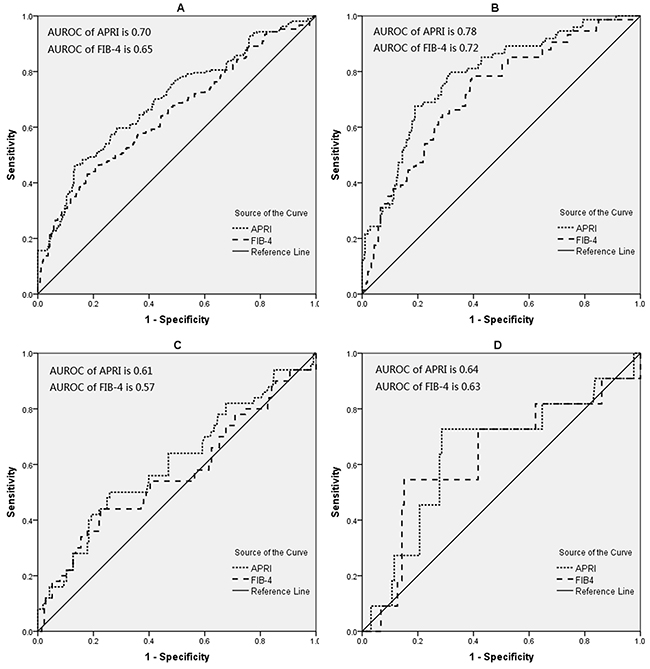 Table 4: AUROCs of APRI and FIB-4 for significant fibrosis and cirrhosis in patients < 30 years

Table 5: The cut-offs of APRI and FIB-4 for significant fibrosis and cirrhosis in patients≥30 years

Table 6: The cut-offs of APRI and FIB-4 for significant fibrosis and cirrhosis in patients < 30 years

In this study, 30 years was determined as a threshold value based on three reasons. First, age over 30 years is associated with higher likelihood of significant fibrosis and cirrhosis than those under 30 years in CHB patients [6, 13]. Second, patient who acquired HBV infection at birth or in early childhood, the average age of transitioning from immune-tolerant to immune-clearance phases is 30 years [6, 12]. In China, the majority of patients acquire HBV either at birth or early in childhood [14]. Third, all international guidelines for CHB recommended age over 30 years as one of the criterions for the assessment of liver histology to determine the stage of fibrosis [1, 6, 7].

However, several important caveats need to be noted. First, the PPV of all noninvasive fibrosis tests was low, especially for APRI and FIB-4, and many patients of significant fibrosis or cirrhosis will be missed using APRI or FIB-4 alone [8]. Therefore, it is important that APRI and FIB-4 are used alongside other clinical or laboratory criteria to identify significant fibrosis and cirrhosis. Second, the results of APRI or FIB-4 may be impacted by comorbidities, such as heavy alcohol intake (due to increase in AST), use of drugs (due to increase in ALT and AST), and malaria or HIV (due to decrease in platelet count) [8]. The impact of above conditions on the diagnostic performances of APRI and FIB-4 has not been fully evaluated. Last but not least, although APRI and FIB-4 are now commonly used, treatment decisions based on either false-positive or false-negative results need to be concerned. A false-positive result may lead to a patient being treated unnecessarily [8]. Conversely, a false-negative result means that a person with cirrhosis would not be identified, and may therefore not receive antiviral therapy [8].

There were several limitations in this study. First, the retrospective design might have caused selective bias [19]. Patients in this study had liver biopsy because of various clinical and laboratory indications such as age over 30 years, a family history of HCC or cirrhosis, a high HBV DNA load and fluctuant ALT level. Age over 30 years was one of the indications for liver biopsy, so the number of patients aged≥30 years was twice as many as patients aged<30 years in this study. Second, the prevalence of significant fibrosis and cirrhosis in this study might be higher than that at a community, because of patients in this study was based on a highly selected population who had liver biopsy because of various indications. Third, the detection limit of HBVDNA is 500 copies/ml, which is a very high value affecting the reliability of the study. Four, the number of F4 patients is markedly less than the number of F2-4 patients in both groups. A small number of cirrhotic patients may result in statistic bias and then affect the study results. Five, our study population, with high prevalence of HBeAg-positivity and narrow interval of years, might not be fully representative of CHB patients. The number of HBeAg (+) patients is large in this study. Although this is expected in the patient group aged<30 years, it seems a more-than-expected value in the patient group aged≥30 years.

In conclusion, APRI and FIB-4 as simple and practicable fibrosis index could identify patients with significant fibrosis or cirrhosis, and free a portion of CHB patients from liver biopsy. Different diagnostic performances and cut-offs were observed for APRI and FIB-4 between patients with age≥30 years and those with age<30 years, which indicated that more attention should be paid to the influence of age on the performances and cut-offs of noninvasive tests.

All patients signed the informed consent before liver biopsy, and all clinical procedures were in accordance with the Helsinki declaration in 1983. The study protocol was permitted by the ethics committee of Shanghai Public Health Clinical Center.

Ultrasonography-guided liver biopsy was performed under local anesthesia. Liver samples of minimum length 15mm were immediately 10% formalin-fixed and paraffin-embedded. Liver tissue with at least six portal tracts was considered sufficient for histologic scoring [20]. The METAVIR scoring system was adopted as the standard of liver fibrosis [21], which was classified into five stages: F0, no fibrosis; F1, portal fibrosis without septa; F2, portal fibrosis with rare septa; F3, numerous septa without cirrhosis; and F4, cirrhosis. All biopsy samples were interpreted independently by two liver pathologists who were blinded to non-invasive fibrosis tests. If they failed to reach an agreement, a third highly experienced pathologist reviewed the biopsy samples. In this study, we defined significant fibrosis as METAVIR F2-4, and cirrhosis as METAVIR F4.

Role of the sponsor

The funding organizations are public institutions and had no role in the design and conduct of the study; collection, management, and analysis of the data; or preparation, review, and approval of the manuscript.

8. World Health Organization. Guidelines for the Prevention, Care and Treatment of Persons with Chronic Hepatitis B Infection. 2015.