Long non-coding RNA (LncRNA) is a class of non-coding RNA, and has more than 200 nucleotides [1]. Initially, LncRNA was considered as spurious transcriptional noise without biological functions because of its lack of protein-coding function [2]. However, later studies indicated that LncRNA plays an important role in pathophysiological processes such as cancers [3, 4]. In recent years, few LncRNAs, such as AFAPI-ASI, MALAT-1, and UCA1 have been confirmed to play a significant role in cancer progression [5–8]. Therefore, LncRNAs might have complex and extensive functions in carcinogenesis and progression of human cancers [9].

The nuclear paraspeckle assembly transcript 1 (NEAT1) is a newly identified nuclear-restricted LncRNA and is located on chromosome 11 (11q13.1). It is an essential component of nuclear paraspeckles [10, 11], and has been confirmed to overexpress in many human cancers, including prostate, lung, and breast cancers [12–14]. High NEAT1 expression in cancerous tissues was reported to be associated with prognosis and overall survival (OS) in several cancers. However, the effect of NEAT1 on the outcome of cancer patients has been controversial. No meta-analysis has been conducted to date on the correlation of NEAT1 with the survival of cancer patients. NEAT1 might act as a potential diagnostic biomarker and prognostic factor. This meta-analysis is the first to explore the correlation between NEAT1 expression and prognosis of cancer patients.

Literature search and description of studies

As shown on Figure 1, 163 studies were found in the 5 databases (PubMed, EMBASE, Cochrane Library, Wiley Online Library and Medline). We reviewed the titles and abstracts, and 49 irrelevant studies and duplicates were excluded. Of the remaining 99 studies, 86 were eliminated because they used different statistics methods, were animal experiments, or were not in English. After data extraction, 13 studies [14–26], all from China, were selected for the final meta-analysis with a total of 1,496 cancer patients. The main characteristics are summarized in Table 1. The 13 studies covered 9 different types of cancer, including ovarian cancer (n=2), colorectal cancer (n=3), non-small cell lung cancer (NSCLC; n=2), gastric cancer (n=1), hepatocellular carcinoma (n=1), glioma (n=1), nasopharyngeal carcinoma (NPC; n=1), pancreatic cancer (PC; n=1) and esophageal squamous cell carcinoma (n=1). Among the 13 studies, 12 involved tissue collection, and 1 involved a whole blood analysis. All of the detection methods used quantitative polymerase chain reaction. 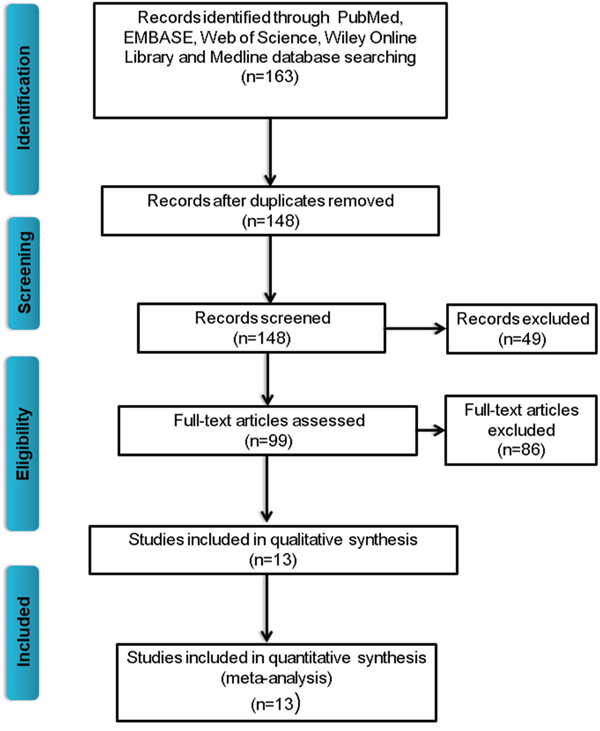 Correlation of high NEAT1 expression with OS in human cancer

All 13 studies showed OS according to NEAT1 expression levels among the 1,496 patients. The pooled hazard ratio (HR) was 1.53 (95% confidence interval [CI]: 1.39–1.68) for the high NEAT1 expression group versus low expression group (p<0.00001; Figure 2). There was no significant heterogeneity (I2=0%, PQ=0.51), and the fixed-effects model was chosen to estimate the pooled HR. This suggested that high expression of NEAT1 was a predicator of poor prognosis among human cancers. 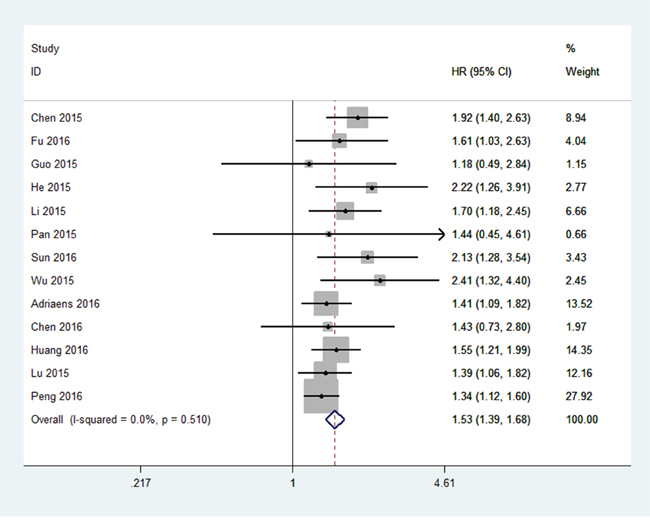 Correlation of NEAT1 expression with clinicopathological parameters and cancer type 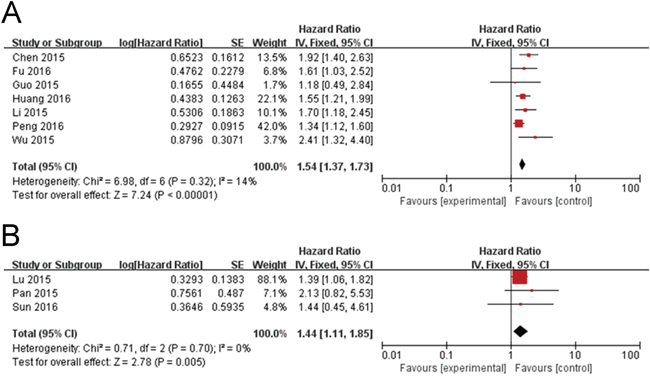 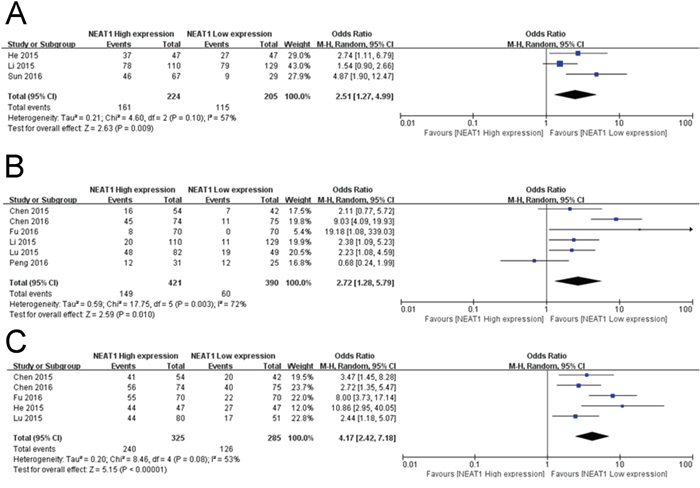 Table 2: Results of the association between NEAT1 and clinicopathological parameters

NEAT1 expression in other cancer types

A sensitivity analysis was conducted to analyze the association between NEAT1 and OS by deleting one study at a time from the pooled analysis to examine the influence of the removed data set to the overall HR. The result was not influenced by the exclusion of each study, suggesting that the result of the synthetic analysis was robust (Figure 6). 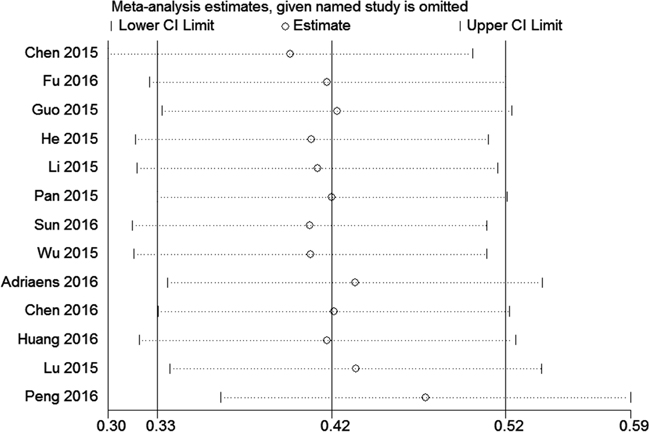 Figure 6: Sensitivity analysis of the effect of the individual study on the pooled HRs for the correlation between NEAT1 expression and overall survival (OS). 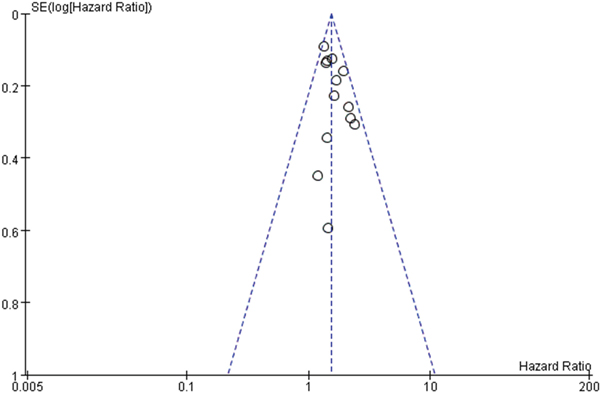 This meta-analysis is the first to evaluate the association between NEAT1 levels and cancer prognosis. The results indicated that high NEAT1 expression was significantly associated with shorter OS times in cancer patients. Subgroup analyses showed that NEAT1 levels were significantly associated with tumor size, TNM stage, and distant metastasis. Yang et al.[27] reported that high expression level of NEAT1 was significantly associated with shorter overall survival in cancer patients, which is similar to our results. However, we also found that the expression of NEAT1 was higher in respiratory carcinomas and correlated with poor prognosis of respiratory carcinomas patients. Xiong et al.[28] used 57 microarrays and other RNA-seq datasets to analyzed correlation of NEAT1 expression with digestive system tumor, and arrived at the same conclusion with us. These results also shown the reliability of our conclusion.

Recently, many LncRNAs have been reported to function as oncogenes or tumor suppressor genes, including PVT1 [29], MALAT1 [30], and HOTAIR [31]. Choudhry et al. reported that NEAT1 is a direct transcription target of HIF-2 in many breast cancer lines and solid tumors. NEAT1 is an essential structural component of paraspeckles, and the hypoxic induction of NEAT1 induces paraspeckle formation in a manner that is dependent upon both NEAT1 and HIF-2. This then leads to accelerated cellular proliferation, improved clonogenic survival, and reduced apoptosis [14]. You et al. reported that NEAT1 is a target of miR-449a and is involved in cell growth and apoptosis of lung cancer cell lines [12]. Yoon et al. reported that NEAT1 can be modulated by RNA-binding protein AUF1, thus affecting the organization of nuclear paraspeckles [32]. Blume et al. reported that NEAT1 is also an important element of the p53-dependent DNA damage response machinery in chronic lymphocytic leukemia [33]. Lastly, Chakravarty et al. reported that NEAT1, as an estrogen receptor alpha specific LncRNA, drives oncogenic growth by altering the epigenetic landscape of target gene promoters [13]. Previous studies revealed that NEAT1 overexpression could influence cell apoptosis and migration [34, 35]. On the contrary, silencing of NEAT1 expression by small interfering RNA could suppress cell apoptosis and metastasis. Therefore, NEAT1 expression level may be an indicator of the intrinsic characteristics of cancer progression. Furthermore, the relationship between NEAT1 expression and a variety of cancer patients’ clinicopathological parameters were reported in previous studies [14–21]. These data might explain why high levels of NEAT1 were significantly associated with shorter OS in cancer patients in this meta-analysis. However, the detailed mechanisms of why NEAT1 was associated with oncologic outcome in cancer were unclear. Wu et al. reported that a 5-LncRNA signature was detected in clear cell renal cell carcinoma patients and normal controls, and further study indicated that this 5-LncRNA signature appears to provide a promising biomarker for the detection of clear cell renal cell carcinoma [36]. Therefore, NEAT1 might also be a tumor marker for predicting tumorigenesis and cancer progression. Although the results revealed the relationship between NEAT1 and OS and patients’ clinicopathological parameters, there are some limitations of this meta-analysis: the number of studies and cancer patients were limited. Most of the studies were conducted in China; therefore, differences may occur between ethnic groups. Additionally, there were 5 studies in which HR could not directly be calculated, thus they may not have provided the most accurate HR estimate. Our results should be confirmed in further studies.

In all, our results indicated that high NEAT1 expression may be a risk factor for shorter OS and a useful biomarker to predict poorer prognosis in human cancers. However, to reinforce the findings, better standardized methods with large sample sizes are needed to further confirm the association between NEAT1 and clinical outcomes of cancers in various ethnic populations.

PubMed, EMBASE, Cochrane Library, Wiley Online Library, and Medline were searched, and articles published from January 1, 1996 to February 10, 2017 were considered. The search strategies were the following: “long non-coding RNA NEAT1” or “lncRNA NEAT1” or “NEAT1” or “nuclear paraspeckle assembly transcript 1” and “Cancer” or “Tumor” or “Neoplasia” and “prognos*” or “surviv*” or “outcome” or “mortality” or “predict.” Reference lists of relevant articles and review papers were also searched manually to identify potential studies.

Inclusion criteria were: (1) Studies were written in English, (2) the level of NEAT1 expression was examined in cancer tissues, (3) investigation of the correlation between NEAT1 expression level and survival outcome (OS or progression-free survival), and (4) HR and its 95% CI for survival time were reported or could be calculated from the reported data. Exclusion criteria were: (1) animal studies, case reports, meta-analyses, and review articles and (2) papers lacking all raw data or inability to calculate its HR, 95% CI, and p values.

The extracted data of this meta-analysis were analyzed using Review Manager 5.3 software (Cochrane network). The HR and its 95% CI were used to evaluate the strength of the association between NEAT1 and OS. If they were reported in a study, HR with 95% CI was extracted directly. If not, the data were extracted from Kaplan–Meier curve using Engauge Digitizer version 4.1 (http://digitizer.sourceforge.net/) [37]. The chi-square-based Q test and I2 statistics were used to determine the heterogeneity [38], and I2 >50% and a P-value for Q test <0.05 were considered significant heterogeneity. Conversely, the I2<50% and a P-value for Q test >0.05 were considered as having no heterogeneity. If there was heterogeneity in the included studies, we chose the random-effects model. The fixed-effects model was chosen when no significant heterogeneity was observed [39]. Sensitivityanalyses were carried out using Stata 12.0 (Stata Corporation, College Station, TX, USA).

All authors declare that they have no conflicts.