**These authors have contributed equally to this work senior co-authors

This study tested the hypothesis that xenogeneic human umbilical cord-derived mesenchymal stem cell (HUCDMSC) therapy would improve survival rates in rats with acute respiratory distress-syndrome (ARDS, induction by 48 h inhalation of 100% oxygen) and sepsis-syndrome (SS, induction by cecal-ligation and puncture) (ARDS-SS). Adult-male Sprague-Dawley rats were categorized into group 1 (sham-controls), group 2 (ARDS-SS), group 3 [ARDS-SS+HUCDMSC (1.2 ×106 cells administered 1 h after SS-induction)], and group 4 [ARDS-SS+HUCDMSC (1.2 ×106 cells administered 24 h after SS-induction)]. The mortality rate was higher in groups 2 and 4 than in groups 1 and 3 (all p<0.0001). The blood pressure after 28 h was lower in groups 2, 3 and 4 (p<0.0001) than in group 1. Albumin levels and percentages of inflammatory cells in broncho-alveolar lavage fluid, and the percentages of inflammatory and immune cells in circulation, were lowest in group 1, highest in group 2, and higher in group 3 than group 4 (all p<0.0001). The percentages of inflammatory cells in ascites and kidney parenchyma showed identical patterns, as did kidney injury scores (all p<0.0001). EarlyHUCDMSC therapy reduced rodent mortality after induced ARDS-SS.

The innate and adaptive immune responses defend the body from non-infectious, harmful substances and invasive microorganisms. Patients with both ARDS and SS (ARDS-SS) experience an uncontrolled immune response, inflammation, over-production of reactive oxygen species (ROS), over-activation (i.e., cascade) of complement, and endotoxin release from infectious microorganisms [4, 10, 13–24]. These complex hyper-inflammatory and immune responses are triggered in an attempt to eliminate the causative factors, but they also cause multi-organ damage in the host [17, 20], which could contribute to the high mortality in ARDS-SS [13–24]. Strategies that target these increased inflammatory and immune responses may have therapeutic potential.

Mesenchymal stem cell (MSC) therapy has the capacity to attenuate inflammation [16, 25–28] and down-regulate innate and adaptive immunity [16, 26–30] through suppressing immunogenicity [16, 26–31]. MSC therapy might improve the clinical outcomes in ARDS-SS patients. However, prior to apply MSC therapy for human being, a preclinical study had to be first performed by using human being derived MSC (i.e., xenogeneic MSC) to prove not only the safety and efficacy but also the immune privilege of the MSC regardless for what kind of biological species. Accordingly, this preclinical study tested the hypothesis that xenogeneic human umbilical cord-derived mesenchymal stem cell (HUCDMSC) therapy could safely and effectively protect rodents from ARDS-SS, and improve prognostic outcome.

Blood pressure and mortality by day 5 after ARDS-SS induction 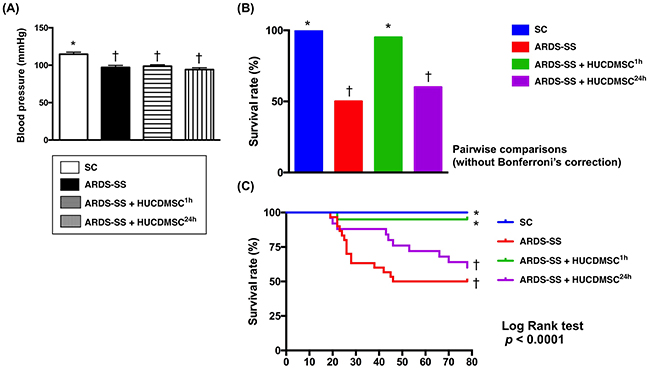 Kidney assessment was necessary because it is the major vulnerable abdominal visceral organ to be involved in cecal ligation and puncture (CLP)-induced SS. Light microscopy of hematoxylin and eosin (H & E)-stained kidney sections showed that average kidney injury score was highest in group 2, lowest in group 1, and higher in group 3 than in group 4. Immunohistochemical (IHC) staining demonstrated an identical pattern in the expression of Wilm’s tumor suppressor gene (WT-1), predominantly in podocytes (Figure 3). 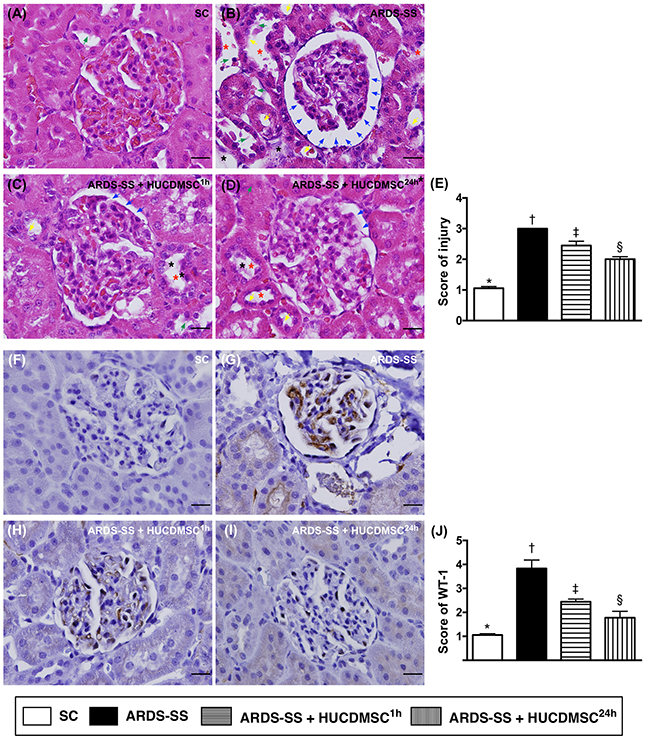 Immunofluorescent (IF) microscopy found that the percentages of cellular expression of three inflammatory biomarkers (CD68, CD14 and MIF) were highest in group 2, lowest in group 1, and higher in group 3 than in group 4 (Figure 4). 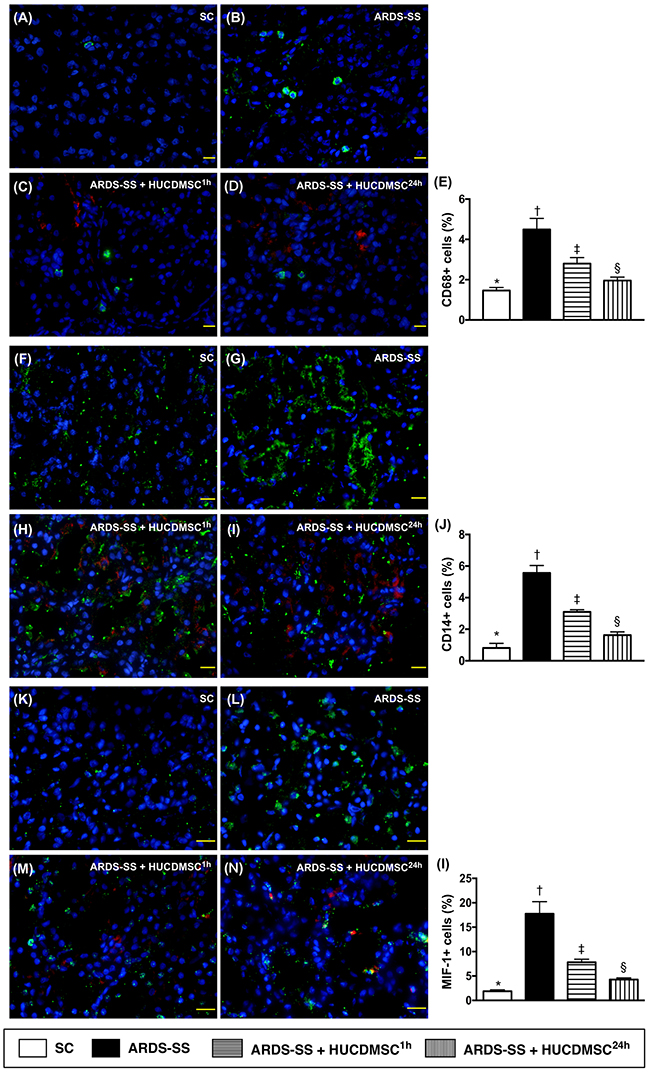 IF microscopy showed that the cellular expression of kidney injury molecule (KIM)-1, a kidney injury biomarker predominant in renal tubules, was increased the most in group 2. KIM-1 was higher in groups 3 and 4 than in group 1, and higher in group 3 than group 4. IHC microscopy showed that the cellular expression of podocin, one component of the podocyte foot process, did not match the KIM-1 pattern between the four groups (Figure 5). 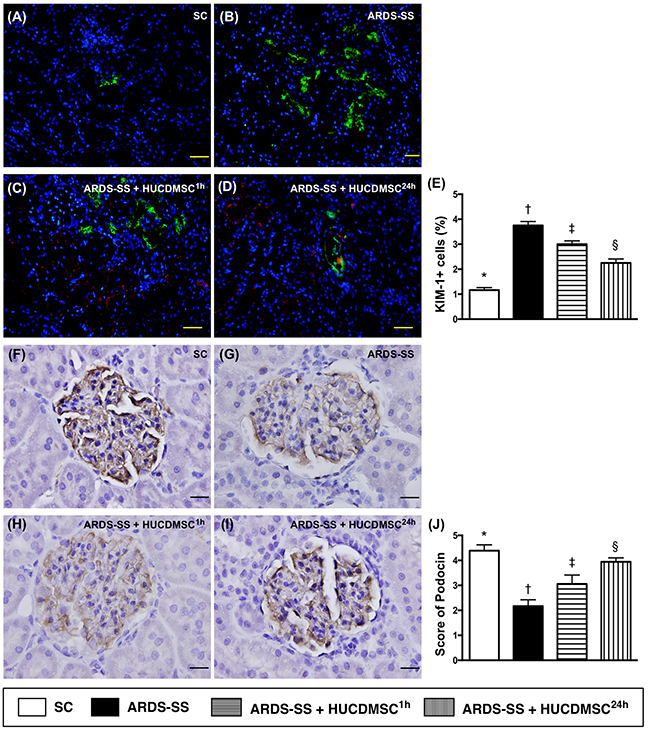 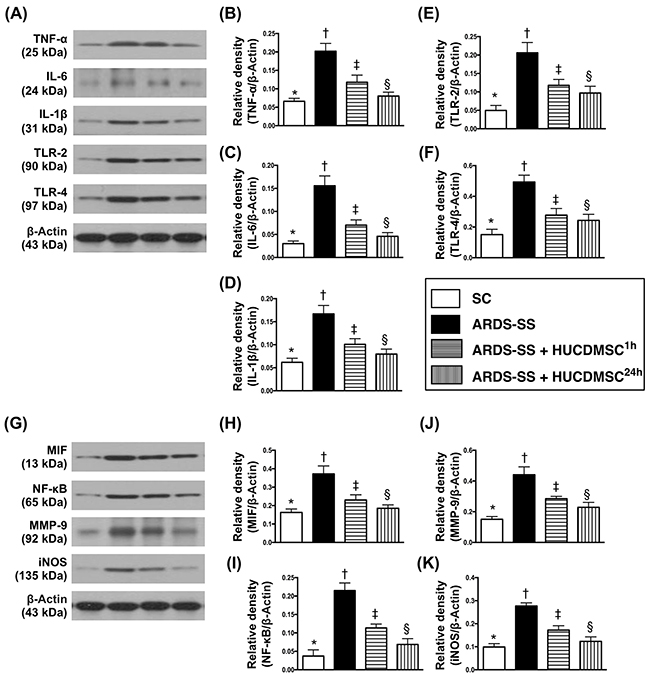 The protein levels of three indicators of oxidative stress (NOX-1, NOX-2, and oxidized protein) were highest in group 2, lowest in group 1, and higher in group 3 than in group 4. The same pattern between the four groups was observed in the protein expression of two indicators of apoptosis [cleaved caspase 3 and cleaved poly (ADP-ribose) polymerase (PARP)] (Figure 7). 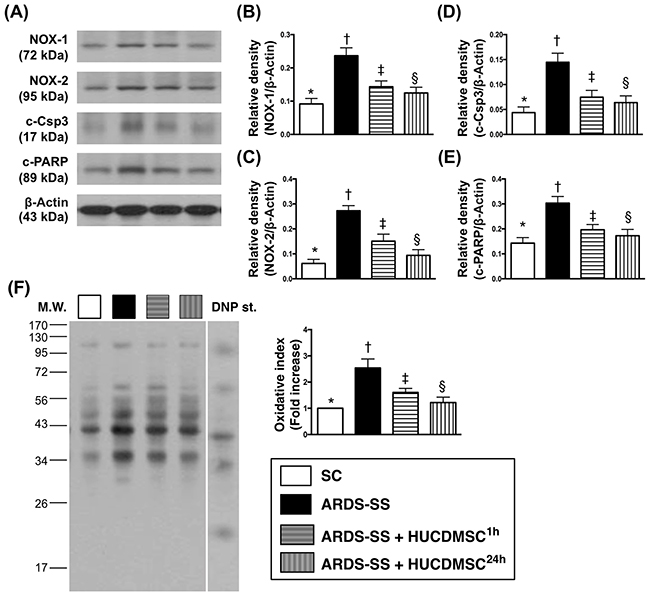 In ascites, flow cytometry demonstrated that the percentages of cells testing positive for six inflammation biomarkers (CD11b/c, MIF, Ly6G, CD14, CD68/CD80, and CD68/CD163) were highest in group 2, lowest in group 1, and higher in group 3 than in group 4 (Figure 8). In the circulation, an identical pattern was observed of three indicators of inflammation response (CD11b/c, Ly6G, and VCAM-1) (Figure 9). Circulating levels of three indicators of immune cells (CD3/CD4, CD3/CD8, and Treg cells) also showed the same pattern among the four groups (Figure 9). 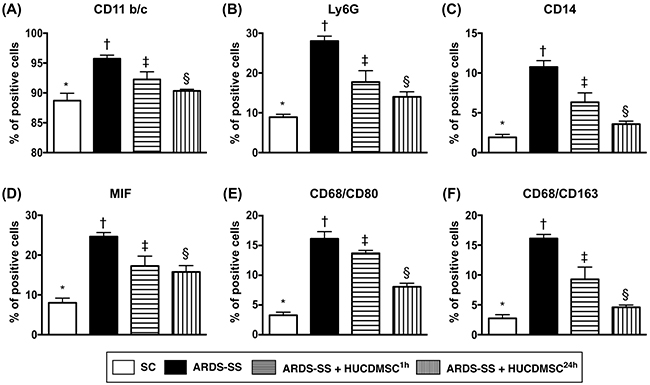 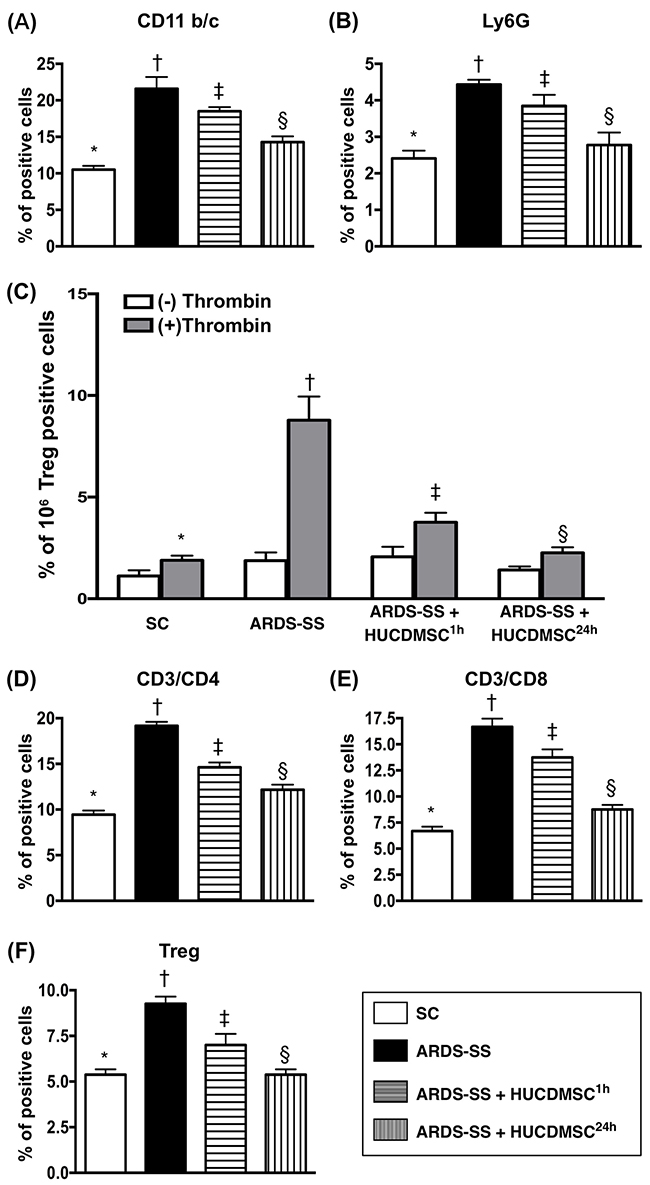 IF microscopy showed that the percentage of cells positive for two inflammation biomarkers in ascites (CD11 and MIF) were highest in group 2, lowest in group 1, and higher in group 3 than in group 4 (Figure 10). The same pattern between the four groups was observed for IL-1ß, TLR-4, and CD11 (Figure 11). 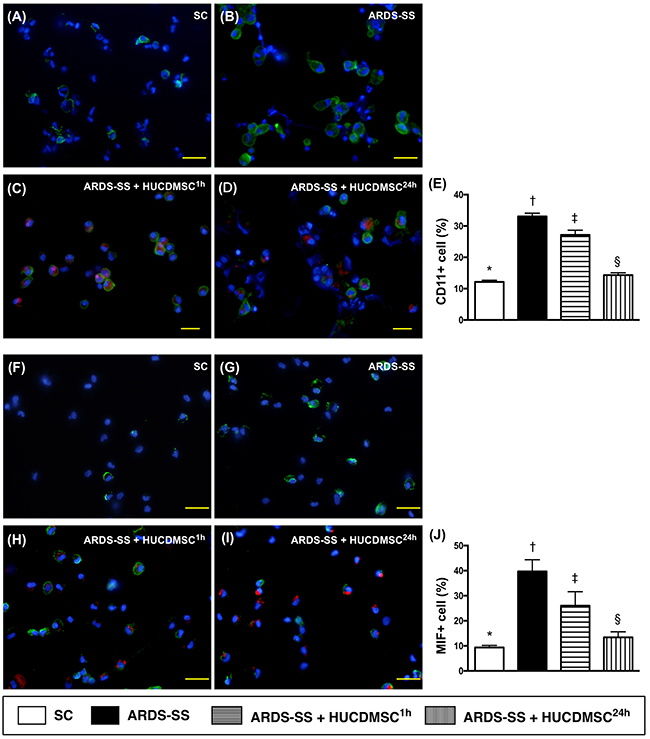 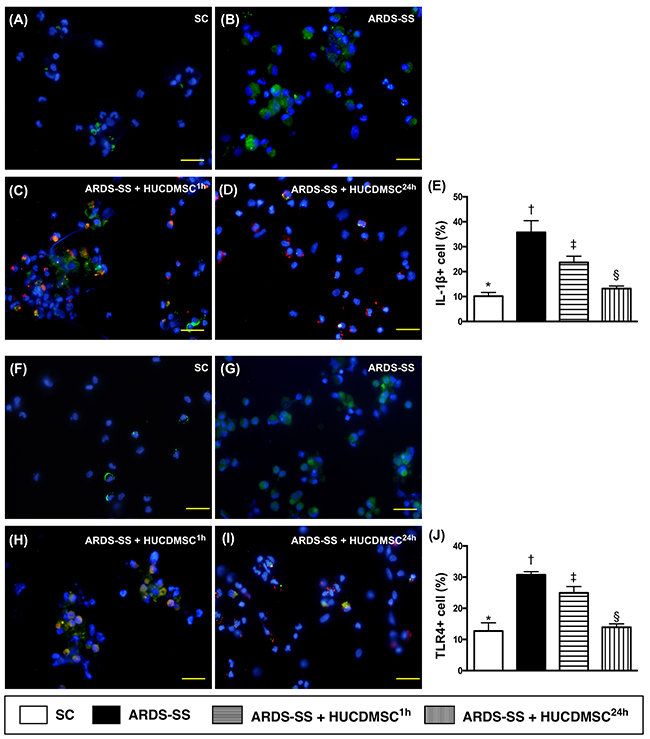 MSC therapy has reduced rodent mortality in SS [32], and both autologous and allogenic ADMSC have the capacity of immune privilege [16, 29, 31–33]. The present study showed that in animals with ARDS-SS, early administration of xenogeneic MSC reduces the mortality rate compared to no treatment. Exogenic MSC effectively saved ARDS-SS animals, which suggests that MSC may have universal immune privilege. Despite the success of the early treatment, late administration of xenogeneic MSC was not effective for rodents with ARDS-SS.

A better prognostic outcome was coupled with an increased inflammatory and immune reaction in group 3 (i.e., ARDS-SS + HUCDMSC1h), and vice versa in group 4 (ARDS-SS + HUCDMSC24h). These unexpected findings could be explained by a few reasons. First, 95% of group 3 animals were alive at the time of treatment, and about half had severe sepsis. The resulting organ damage (i.e., kidney parenchymal damage) can lead to relatively higher inflammatory and immune reactions. Second, nearly half of the group 4 animals were dead at the late treatment, suggesting the organ damage (i.e., the kidney parenchymal damage) should be relatively less severe in the animals that survived. This less severe damage would most likely not cause an overwhelming immune response relative to the other groups. Third, half-life and functionality of HUCDMSCs in animals is a possible factor resulting in differing inflammatory responses between group 3 and group 4.

Although the short-term outcome in ARDS-SS rats was improved after the early HUCDMSC treatment, the long-term outcome was not studied. Despite the albumin level in BAL fluid was found to be increased in ARDS-SS, we did not study whether ARDS, SS, or ARDS-SS was the most important contributor to this increase in lung permeability.

In conclusion, early administration of xenogeneic MSC suppressed the inflammatory/immune reaction, preserved the integrity of vital organs (i.e. lung and kidney), and reduced the mortality rate in rodents with induced ARDS-SS.

Animals were housed in an Association for Assessment and Accreditation of Laboratory Animal Care International (AAALAC)-approved animal facility in our hospital with controlled temperature and light cycle (24°C and 12/12 light cycle).

Inducing ARDS and SS in rodents

The ARDS experimental model used in this study is described in our recent studies [17, 18], wherein pure oxygen (i.e., 100% O2) was continuously administered to the rat for 48 h. The SS induction procedure has been described in our previous report [34], which features a cecal ligation and puncture (CLP) 48 h after ARDS induction.

The tail systolic blood pressure (SBP) was measured with a CODA monitor (Kent Scientific Corporation, U.S.A.) at 28 h after CLP by a technician who was blinded to the treatment protocols.

Isolation and culture of HUCDMSCs

The HUCDMSCs were provided by BIONET Corp. (Taipei City, Taiwan). The protocol for HUCDMSC preparation was described as follows:

After obtaining informed consent, umbilical cords were collected and stored in DPBS (Gibco), and kept at 4ºC until processing. The cords were delivered to the laboratory in a bottle of sterile saline solution, and processed within 24 h after birth. The umbilical cords were first disinfected with 75% ethanol, and then washed with PBS to remove any contaminating blood.

After removing the blood vessels to avoid endothelial cell contamination, the cord tissue was cut into small pieces (0.5-1 mm3). The small pieces were placed directly into 10 cm culture dishes for growth in alpha-MEM (GIBCO, USA) supplemented with 5% UltraGROTM (AventaCell, USA) and antibiotics (PSA, GIBCO). Cultures were maintained at 37ºC in a humidified atmosphere containing 5% CO2, replenished with fresh medium every 3-4 days. Near confluent cultures were rinsed with DPBS, harvested with 0.05% TrypLE (GIBCO, USA), and transferred to fresh 10 cm culture dishes at a plating density of 3-6 x 103 cells per cm2 for further growth. MSCs were then cryopreserved in culture medium containing 10% DMSO, using a control rate freezer (Icecube, Sylab, AT) and stored at -190ºC in a vapor phase liquid nitrogen tank.

For both the bronchoalveolar lavage and cellular investigations, 12 surviving animals were required in each group (n = 6 in both subgroups). Including the number of dead animals, the number of rats utilized in groups 1 to 4 were 20, 30, 20, and 25, respectively. Animals were euthanized by day 5 after ARDS-SS induction.

The preparation of lung specimens for morphometric analyses is described in our previous studies [18, 36]. To elucidate the impact of HUCDMSC treatment on suppressing the inflammatory and immune reactions in lung parenchyma after ARDS-SS induction, bronchoalveolar lavage (BAL) was performed and the BAL fluid was collected for the study in six rats from each group.

Flow cytometric quantification of immune and inflammatory cells in circulation, ascites and BAL and abdominal ascites

Immunohistochemical (IHC) and immunofluorescent (IF) staining

IF staining has been described in our previous reports [32, 35, 37]. For IHC and IF staining, rehydrated paraffin sections were first treated with 3% H2O2 for 30 minutes and incubated with Immuno-Block reagent (BioSB, Santa Barbara, CA, USA) for 30 minutes at room temperature. Sections were then incubated with primary antibodies specifically against CD68 (1:100, Abcam, Cambridge, MA, USA), CD14 (1:300, BioSS, Woburn, MA, USA), kidney injury molecule (KIM)-1 (1:500, R&D Systems), MIF-1 (1:100, Abcam, Cambridge, MA, USA), and Wilm’s tumor suppressor gene (WT)-1 (1:1000, Abcam, Cambridge, MA, USA). Sections incubated with irrelevant antibodies served as controls. Three sections of kidney specimens were analyzed in each rat. For quantification, three randomly selected high power fields (HPFs; 400x for IHC and IF studies) were analyzed in each section. The mean number of positively-stained cells per HPF for each animal was determined across all nine HPFs.

FYL, KHC, MSL, and HKY conceived and designed the study, acquired and analyzed data, and drafted the manuscript. CGW, PHS, JJS, SYC, YLC, and HIL were responsible for the laboratory assays and troubleshooting. CKS, HJC, HWC, and SFK acquired, analyzed, and interpreted data. All authors read and approved the final manuscript.