Andrographolide (ADH), a diterpenoid lactone extracted from Andrographis paniculata, has been found to have anti-inflammatory and anti-oxidative effects. However, its protective effects and mechanisms on liver injury have not been investigated clearly. This study takes an attempt to reveal the protective effects and mechanism of ADH on lipopolysaccharide (LPS) and D-galactosamine (D-GalN)-induced acute liver injury in mice. The mice liver injury model was induced by LPS (60 mg/kg) and D-GalN (800 mg/kg), and ADH was given 1 h after LPS and D-GalN treatment. Hepatic tissue histology was measured by H&E staining. Serum alanine aminotransferase (ALT) and aspartate aminotransferase (AST) levels were detected by detection kits. The levels of TNF-α and IL-1β were detected by ELISA. Moreover, malondialdehyde (MDA) and reactive oxygen species (ROS) contents were also detected. Meanwhile, the expression of Nrf2, HO-1, and NF-κB were detected by western blot analysis. The results showed that ADH treatment improved liver histology and decreased the levels of ALT, AST, MPO, IL-1β, TNF-α, as well as MDA and ROS levels of hepatic tissues in a dose-dependent manner. ADH also inhibited LPS/D-GalN-induced NF-κB activation. The expression of Nrf2 and HO-1 were increased by treatment of ADH. In conclusion, ADH protected against LPS/D-GalN-induced liver injury by inhibiting NF-κB and activating Nrf2 signaling pathway.

Andrographolide (ADH), an active constitutent isolated from Andrographis paniculata, has been found to have anti-inflammatory and antioxidant effects [11]. ADH has been reported to inhibit LPS-induced acute lung injury in mice [12]. ADH also prevented inflammatory bone loss in vivo [13]. In vitro, ADH has been reported to inhibit LPS-induced inflammatory mediator production in RAW264.7 cells [14]. ADH also inhibited HMGB1-induced inflammatory responses in human umbilical vein endothelial cells [15]. Previous studies showed that ADH exhibited its anti-inflammatory effects by inhibiting NF-κB activation [16]. However, the protective effects and mechanisms of ADH on LPS and GalN-induced acute liver injury remain unclear. Therefore, this study takes an attempt to investigate the effects of ADH on liver injury and reveal its mechanism.

The effects of ADH on LPS/GalN-induced liver histopathologic changes were measured by H&E staining. The results showed that liver tissues of the control group exhibited an integral hepatic lobular architecture and normal hepatocytes (Figure 1A). However, liver tissues of LPS/D-GalN group showed disturbed architecture, including extensive hemorrhage, necrosis and neutrophil infiltration (Figure 1B). These histopathologic changes induced by LPS/D-GalN were significantly inhibited by ADH (Figure 1C, 1D, 1E). 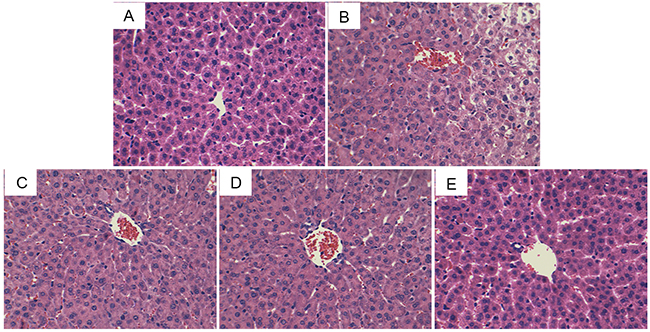 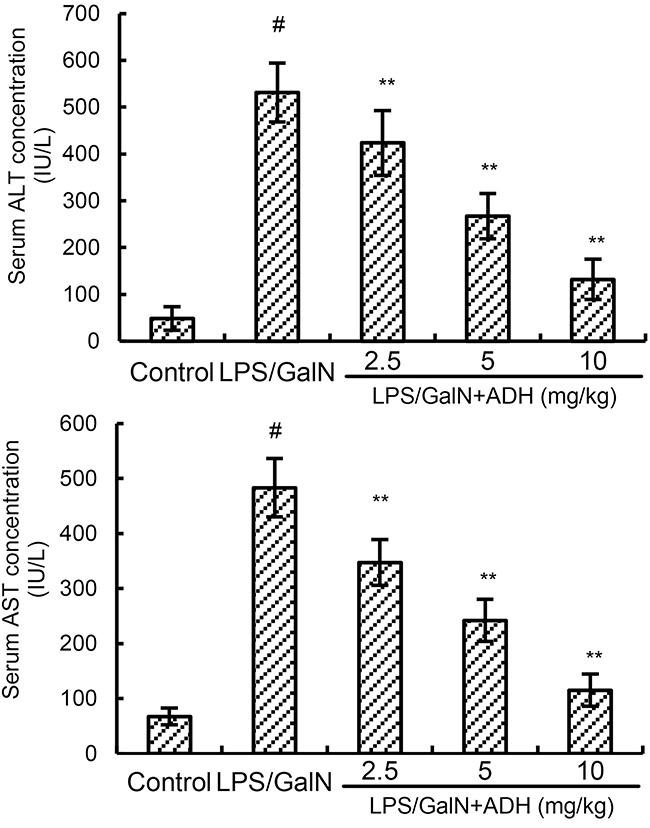 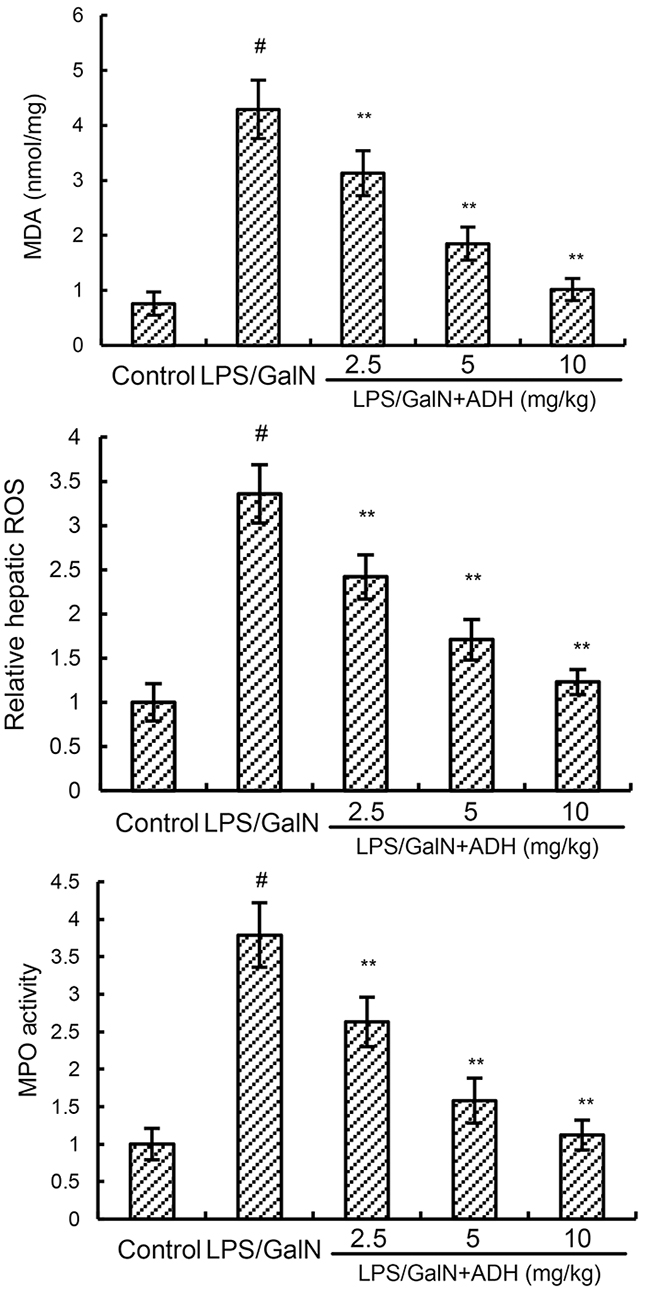 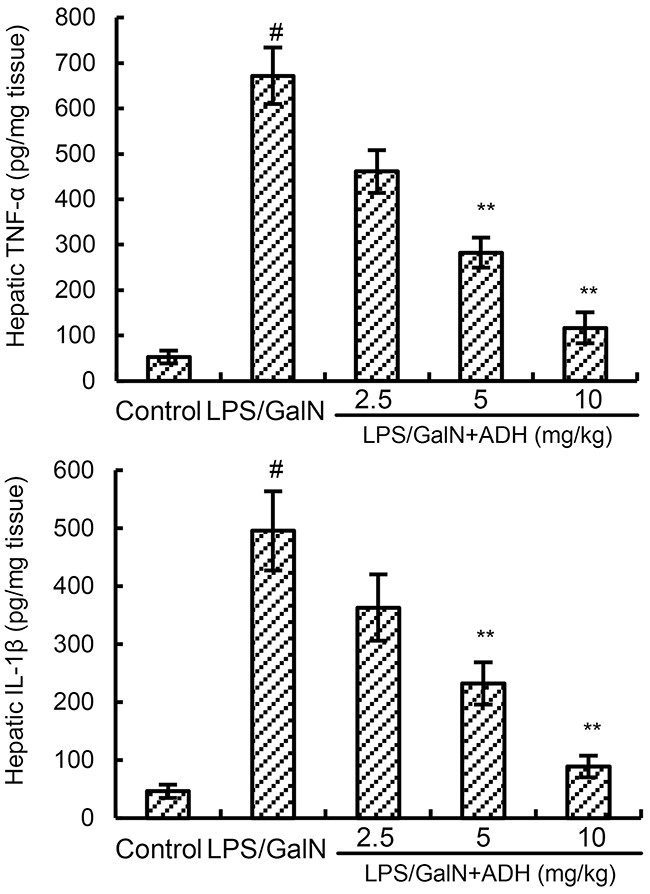 NF-κB, a critical transcription factor, has been known to play an important role in the regulation of inflammatory cytokines. To investigate the anti-inflammatory mechanism of ADH, the effects of ADH on LPS/GalN-induced NF-κB activation were detected in this study. The results showed that LPS/GalN significantly up-regulated the levels of phosphorylation of NF-κB and IκBα. However, treatment of ADH dose-dependently inhibited LPS/GalN-induced NF-κB activation (Figure 5). 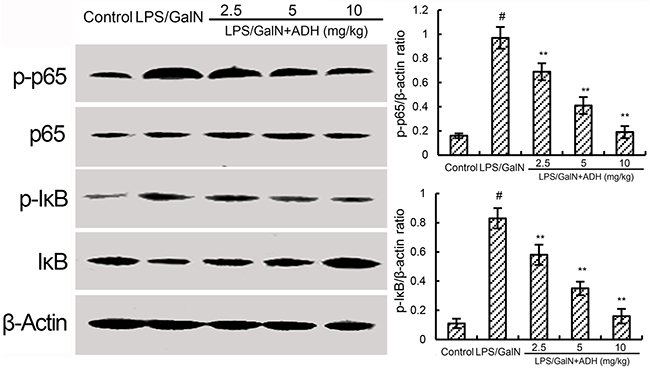 Figure 5: Effects of ADH on LPS/GalN-induced NF-κB activation. ADH (2.5, 5, and 10 mg/kg) were administered intraperitoneally 1 h after LPS/GalN treatment. 8 h after LPS/GalN challenge, NF-κB activation were detected. The values presented are the mean ±S.E.M. of three independent experiments. The density values of the Western blot were normalized for β-actin. P#<0.01 vs. control group, P*<0.05, P**<0.01 vs. LPS/GalN group.

Effects of ADH on Nrf2 and HO-1 expression

Nrf2 is a transcription factor implicated in the transactivation of gene coding detoxifying enzymes. To investigate the anti-oxidative mechanism of ADH, the effects of ADH on Nrf2 signaling pathway were measured in this study. As shown Figure 6, the expression of Nrf2 and HO-1 were up-regulated by treatment of LPS/GalN. However, compared to the LPS/GalN group, the expression of Nrf2 and HO-1 in LPS/GalN + ADH groups increased significantly. 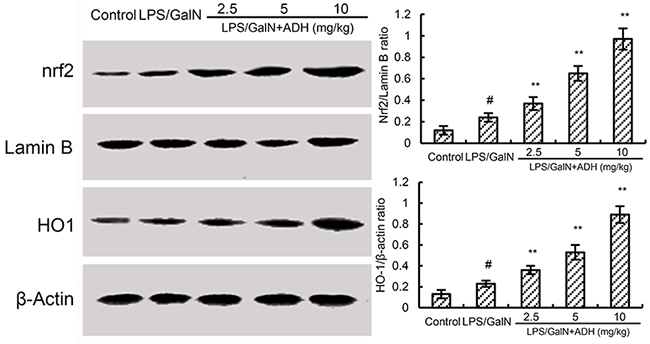 Figure 6: Effects of ADH on Nrf2 and HO-1 expression. ADH (2.5, 5, and 10 mg/kg) were administered intraperitoneally 1 h after LPS/GalN treatment. 8 h after LPS/GalN challenge, Nrf2 and HO-1 expression were detected. The values presented are the mean ±S.E.M. of three independent experiments. The density values of the Western blot were normalized for β-actin. P#<0.01 vs. control group, P*<0.05, P**<0.01 vs. LPS/GalN group.

BALB/c mice (6–8 weeks old, weighing approximately 18-22g) were purchased from the Center of Experimental Animals of Wenzhou Medical University (Wenzhou, China). The mice were housed in microisolator cages under a 12/12 h light/dark cycle at 24±1 °C and 40–80% humidity. The mice were fed with food and water ad libitum. All animal experiments were performed in accordance with NIH guidelines for the care and use of laboratory animals.

Sixty mice were divided into five experimental groups (n=10) as follows: Control group; LPS/GalN group, LPS/GalN + ADH (2.5, 5, and 10 mg/kg) groups. Mice were injected intraperitoneally with LPS (60 mg/kg) and D-GalN (800 mg/kg) to establish the mice liver injury model [35]. ADH (2.5, 5, and 10 mg/kg) were administered intraperitoneally 1 h after LPS/GalN treatment. The blood and liver tissues were collected 8 h after LPS/GalN challenge for subsequent analysis. The chose of 8 h after LPS/GalN challenge were based on previous study [36].

The liver tissues were collected 8 h after LPS/GalN treatment. Then, the tissue samples were fixed in 10% buffered formalin for 24 h. The samples were dehydrated with graded alcohol, embedded in paraffin, and sectioned. Finally, the samples were stained with hematoxylin and eosin according to standard procedures.

The liver tissues were collected 8 h after LPS/GalN treatment. Then the tissues were weighed and homogenized with PBS (1:9, w/v). The levels of inflammatory cytokines TNF-α and IL-1β in the supernatants were detected by ELISA (Biolegend, USA) according to the manufacturer’s instructions.

The liver tissues were collected 8 h after LPS/GalN treatment. Total proteins from liver tissues were extracted with T-PER protein extract kit (Pierce, Rockford, IL, USA) according to the manufacturer’s instructions. The concentration of the protein was determined by BCA protein assay kit (Beyotime, China). Equal amounts of protein were separated through 12% SDS polyacrylamide gels. Subsequently, the proteins were transferred to PVDF membranes. The membranes were blocked with 5% non-fat milk for 2 h at room temperature. Then, the membranes were incubated with primary antibodies: TLR4, p65, p-p65, p-IκBα, and IκBα. After washing three times with TBST, the membranes were probed with HRP-conjugated secondary antibody and visualized by the ECL western blotting detection system.

All experimental data were expressed as mean ± SEM. Multiple comparisons were evaluated by one-way ANOVA the Tukey-Kramer method were used. Statistical significance was defined as P<0.05.

All authors declare that they have no conflict of interest.