*The authors contributed equally to this work

Forkhead box D3 (FOXD3) is an important member of the FOX transcription factor family and is located on human chromosome 1p31 [7]. FOXD3 is critical for embryonic development, especially in maintenance of pluripotency in ESCs and regulation of neural crest formation, migration and differentiation. In addition, FOXD3 plays a critical role in tumor initiation and growth by interacting with other transcription factors like TWIST1 [8, 9]. Many studies have shown the relevance of FOXD3 in tumorigenesis. FOXD3 inhibits non-small cell lung cancer progression [7]. Its downregulation is associated with distal metastases in invasive ductal carcinomas of the breast [10]. Also, low FOXD3 expression predicts poor prognosis in high-grade glioma patients [11]. Further, inhibition of the EGFR-Ras-Raf-MEK-ERK signaling by FOXD3 suppressed colon cancer progression [12]. However, the role of FOXD3 in anaplastic thyroid cancer (ATC) is not clear.

Therefore, we investigated the mechanistic role of FOXD3 in thyroid cancer progression by evaluating ATC cell lines and patient tissue samples. FOXD3 knockdown could lead to abnormal cell proliferation and inhibit cell apoptosis. Subsequently, FOXD3 knockdown could also downregulate the expression of E-cadherin via activation of MAPK/EKR signaling pathway. ,Clinical studies also showed FOXD3 was high expressed in normal samples campared with tumor samples and its expression was negatively correlated to p-ERK, suggesting that FOXD3 is critical for thyroid tumor genesis and progression. 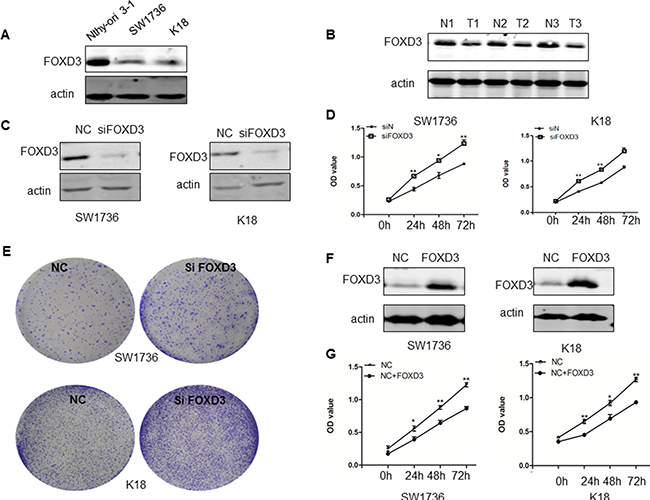 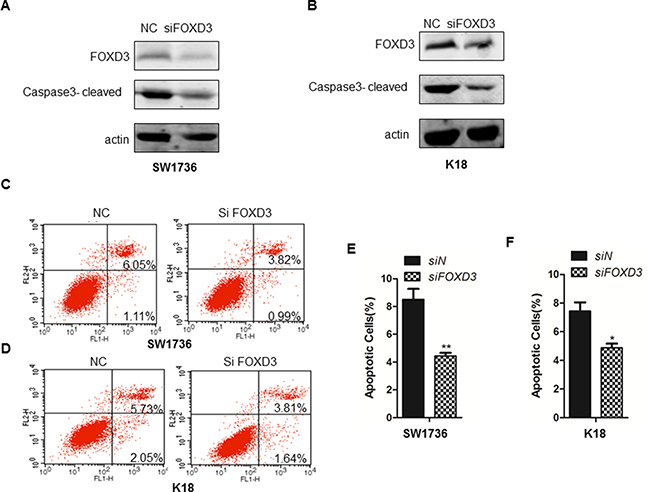 We further tested if FOXD3 expression was associated with epithelial-mesenchymal transition (EMT) and metastasis. First, we analyzed expression of TWIST1, E-cadherin and p-ERK that are involved in EMT and metastasis of breast cancer [13]. We observed that FOXD3 knockdown increased Twist1 and p-ERK levels, but, E-cadherin remained constant and was not downregulated (Figure 3A–3B). In addition, knockdown of FOXD3 enhanced invasiveness of SW1736 and K18 cells in the Transwell migration assay (Figure 3C–3E). This suggested that low FOXD3 enhanced EMT and metastasis of anaplastic thyroid cancer cells. 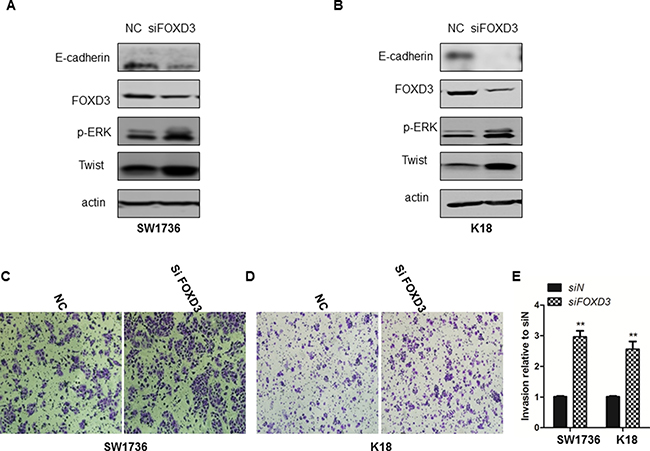 Since the MAPK pathway is upregulated in thyroid cancer because of activating BRAF mutations and others, we evaluated the effects of FOXD3 knockdown on ERK1/2. Western blot analyses showed that transient FOXD3 knockdown markedly increased the p-ERK in SW1736 and K18 cells (Figure 4A–4B). Further, we treated FOXD3 knockdown SW1736 and K18 with MEK inhibitor AZD6244 and observed that p-ERK levels were normalized (Figure 4A–4B). Together, these results suggested that MAPK/ERK pathway was regulated by FOXD3 in ATC cells.

Next, we performed murine xenograft experiments with FOXD3 knockdown and control SW1736 cells to understand the in vivo relevance of FOXD3 in anaplastic thyroid tumor growth. We observed that tumors derived from FOXD3 knockdown SW1736 cells were larger than those from control SW1736 cells. This was further reflected by concomitant increase in tumor weight from FOXD3 knockdown SW1736 cells compared to controls (Figure 5A, 5B). Furthermore, reduced FOXD3 protein expression in the knockdown tumor samples was also associated with low E-cadherin and high p-ERK1/2 levels compared with the controls (Figure 5C). Immunohistochemical analysis further revealed low FOXD3 and high p-ERK1/2 expression in human anaplastic thyroid tumors compared to normal tissue samples (Figure 5D–5E), thereby confirming the association between FOXD3 and MAPK/ERK signaling. 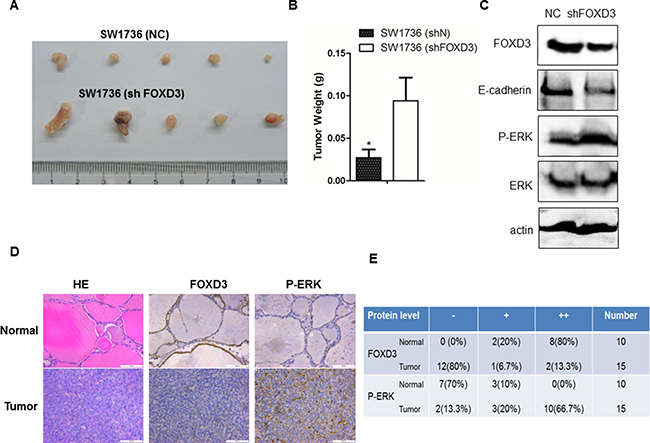 Anaplastic thyroid cancer is an aggressive, rapidly metastasizing tumor with poor prognosis. We observed that FOXD3 deletion increased invasiveness of SW1736 and K18 cell lines and decreased E-cadherin expression. These results indicated that FOXD3 regulated human ATC metastasis, which is the main cause of patient death. A previous study showed that FOXD3 expression decreased cancer cell migration that was efficiently reversed by TWIST1 overexpression [8]. Also, FOXD3 expression in melanoma cells downregulated migration and invasion by inhibiting Rnd3 expression [8, 21], consistent with our results. Thus, we postulate that FOXD3 is a repressor of cancer metastasis. Further studies are required to determine if overexpression of FOXD3 in human ATC cells could inhibit their aggressive character and reverse the expression of thyroid specific genes. Moreover, the detailed mechanistic role of FOXD3 as a tumor suppressor in ATC needs to be ascertained.

The RAS family members regulate RAF–MEK–ERK signaling pathway, which has been implicated in many tumors including ATC [22]. Also, RAS mutations have been reported in benign and malignant thyroid tumors [23]. BRAF is a serine/threonine kinase that regulates cell proliferation through MEK/ERK signaling pathway and is the most common mutation in papillary thyroid cancer. In ATC, BRAF mutations vary from 0 to 50% [24]. Also, Abel et al. demonstrated that mutant BRAF suppressed FOXD3 expression [19]. Therefore, ERK1/2 activity is critical in human thyroid carcinogenesis. In this study, we found that FOXD3 deficiency was associated with enhanced ATC cell proliferation, invasion and migration coupled to activation of ERK1/2, which could be reversed by ERK1/2 inhibitor. Hence, we conclude that FOXD3 regulates ATC partly through its modulation of MAPK/ERK signaling pathway. Further investigations are necessary to reveal interactions between FOXD3 and ERK in human ATC.

In conclusion, we demonstrated that FOXD3 knockdown resulted in enhanced ATC proliferation, invasion and migration and diminished cellular apoptosis. Further, we showed that FOXD3 regulated expression of E-cadherin by modulating MAPK/EKR signaling pathway that promotes EMT and metastasis during thyroid carcinogenesis.

Nthy-ori-3-1, SW1736 and K18 were purchased from ATCC. The stable FOXD3 knockdown cell lines were generated by transfection of retroviral shRNA vectors with FOXD3 or control shRNA obtained from OriGene (Rockville, MD).

For transient transfections, the following siRNA against FOXD3 was used: 5-GCAAUAGGGACGCGCCAAU-3 [21]. To analyze by RT-PCR, total RNA was extracted from SW1736 and K18 cells and 2 μg RNA from the samples was reverse transcribed into cDNA with M-MLV reverse transcriptase (Invitrogen) following the manufacturer’s instructions. The primers for FOXD3 were as follows: forward, 5-AGCAAGCCCAAGAATAGC-3; reverse, 5-TC CAGGGTCCAGTAGTTG-3.

For cell viability assay, cells were cultured in 24-well plates at 37°C in a CO2 incubator after transient transfection with FOXD3 or control siRNA for 24, 48 and 72 h, respectively. This was followed by incubation with 50 μl/well of 10 mg/ml 3-(4,5-dimethyl-thiazol-2-yl)-2,5-diphenyltetrazolium bromide (MTT) at 37°C for 2 h. Then, the supernatant was aspirated, and the MTT-formazan crystals were dissolved in 500 μl of DMSO. The absorbance was measured at 570 nm by a microplate reader.

For soft agar assay, 5 × 104 cells per well were seeded in triplicates into 96 well dishes and cultured at 37°C for 7 days. Individual colonies were fixed and stained with 0.2% crystal violet in 10% ethanol for 30 minutes. The amount of dye taken up by the monolayer was quantified in a spectrophotometer or plate reader at 570 nm [12].

The control and FOXD3 knockdown cells were harvested, washed twice with pre-chilled PBS and resuspended in 100 μl 1X binding buffer by Annexin V-FITC/PI Apoptosis Detection Kit (BD, 556547). Then, 5 μl annexin V-FITC and 5 μl PI were added to the cell suspension and incubated for 15 min followed by addition of 400 μl 1× binding buffer. The cells were analyzed in a Beckman Coulter FC500 flow cytometer [12] and the AnnexinV+ PI+ double positive cell numbers were determined by analyzing the FACS data.

Western blot analysis was performed to determine the effects of FOXD3 silencing on MAPK signaling pathway and EMT transition in thyroid cancer cells and tumor tissues [12]. ATC cells were washed with cold PBS and lysed with 1%NP40 and the supernatant was used as total protein lysate. On the other hand, human thyroid tumor samples were homogenized in liquid nitrogen and lysed for 30 min in ice-cold protein extraction buffer. Equal amounts of total protein (50 μg) were separated on a 10% SDS-PAGE and transferred onto nitrocellulose membrane. Then, after blocking, the membranes were incubated with primary monoclonal antibodies overnight at 4°C. The following primary antibodies were used: FOXD3 (Millipore), β-actin (Sigma), TWIST1 (Proteintech) and p-ERK, ERK, E-cadherin and cleaved caspase-3 (Cell signaling). Next, the membrane was incubated with fluorescent labeled secondary antibody for 1 h. Finally, the protein bands were visualized and quantified using the Odyssey Infrared Imaging System (LI-COR, USA).

For immunohistochemical (IHC) analysis, ATC tumor tissues were fixed with 4% paraformaldehyde for 3 days and embedded in paraffin and 4 μm thick sections were cut. Then, the paraffin sections were dewaxed in xylene and rehydrated with graded concentrations of ethanol and stained with hematoxylin and eosin. Then, the sections were incubated with primary antibody overnight at 4°C and further developed with Histostain-Plus (DAB) IHC kit (Mingrui Biotech, Shanghai) [12].

Five week old female BALB/c nude mice were bought from Shanghai Silaike Experimental Animal Co.,Ltd. Then, 2 × 106 SW1736 cells in 100 μl PBS were implanted into the dorsal flanking sites of nude mice. Four weeks after injection, the mice were sacrificed and the tumors were harvested and their size and weight assessed. Samples from the tumors were also subjected for western blotting assay to estimate FOXD3, E-cadherin and p-ERK.