Background: Few studies have been designed to evaluate the short- and long-term outcomes of laparoscopy-assisted total gastrectomy (LATG), and a retrospective study of a large patient cohort is valuable before conducting randomized controlled clinical trials.

Materials and Methods: We prospectively collected data from 1096 patients who underwent total gastrectomy for gastric cancer. Propensity score matching was applied to compare the covariates between the LATG group and the open total gastrectomy (OTG) group. Operative outcomes and long-term outcomes were compared between the two groups.

Conclusions: Implementation of LATG for gastric cancer is a safe, reliable and minimally invasive procedure with long-term outcomes similar to those of OTG. Further randomized controlled clinical trials can be conducted to provide valuable evidence of the safety and efficacy of LATG in treating gastric cancer.

Since laparoscopy-assisted distal gastrectomy (LADG) for early gastric cancer (EGC) was first reported by Kitano et al. [1] in 1994, the use of laparoscopy-assisted gastrectomy (LAG) has gained popularity as a treatment for EGC. The advantages of minimally invasive laparoscopic gastrectomy include faster recovery, decreased blood loss, fewer postoperative complications and a shorter hospital stay [2–4]. Laparoscopic gastrectomy has been a standard approach for EGC due to its minimal invasiveness and similar long-term outcomes compared with conventional open surgery. Many experienced institutions have already extended the indications of laparoscopic gastrectomy to highly selective patients with advanced gastric cancer (AGC), and the majority of retrospective studies have focused on patients with AGC who underwent laparoscopic distal gastrectomy. Moreover, centers in Japan, Korea and China have been conducting several randomized controlled trials to evaluate the feasibility and safety of LADG for gastric cancer in recent years [5–7]. To the best of our knowledge, few reports have compared the feasibility, safety and long-term outcomes of laparoscopy-assisted total gastrectomy (LATG) to those of open total gastrectomy (OTG), and randomized controlled clinical trials comparing these two modalities have not yet been reported. Therefore, we enrolled a large number of patients and used the propensity score-matching method to reduce bias in our study. We compared the short-term and long-term outcomes achieved by LATG and OTG to investigate the efficacy of the laparoscopic approach for patients with gastric cancer, and the results can provide new evidence to support the application of LATG prior to conducting randomized controlled clinical trials.

The clinicopathological characteristics of the LATG and OTG groups are shown in Table 1. Among all patients, age, tumor location, histologic type, pT stage, pN stage and pTNM stage significantly differed between the LATG group and OTG group (P < 0.05).

Postoperative complications of the LATG group and OTG group 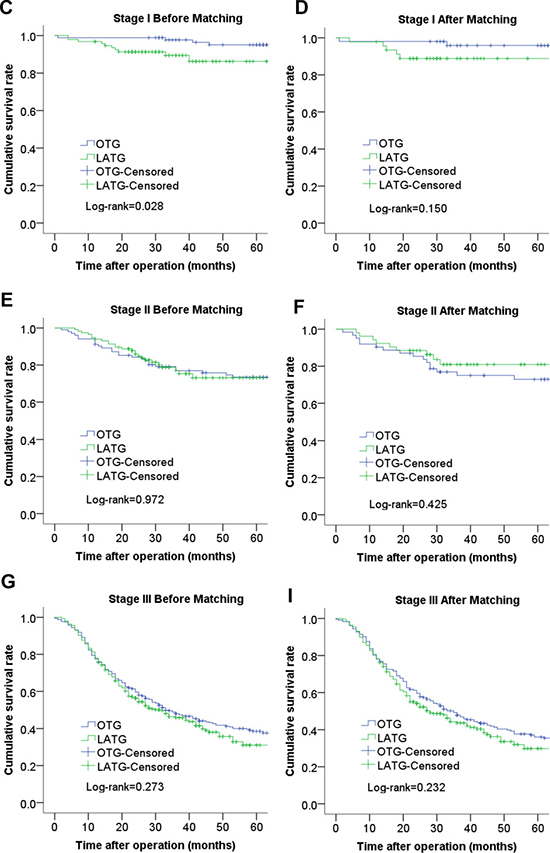 Laparoscopic gastrectomy is an acceptable alternative to conventional open gastrectomy for patients with ECG not only because the two procedures result in similar survival and recurrence [8, 9] but also because patients tend to experience better early postoperative outcomes than those undergoing open gastrectomy [2–4]. In recent years, several experienced institutions have reported favorable long-term oncological outcomes as well as the improved technical feasibility and safety of LADG for the treatment of advanced gastric cancer compared with conventional open gastrectomy [6, 10, 11]. However, few studies have examined LATG due to extended lymph node detection and complex digestive construction. Moreover, these retrospective studies have primarily examined EGC in small samples [12–17], and randomized controlled clinical trials have not been reported. Therefore, our institution enrolled a large number of patients to evaluate the feasibility, safety and clinical efficacy of LATG before conducting randomized controlled clinical trials that evaluate the efficacy of LATG for the treatment of gastric cancer. Specifically, the propensity score-matching method was used to reduce bias.

Long-term survival rates are important elements for assessing oncological safety. Specifically, laparoscopic gastrectomy can only be accepted as an alternative approach to open gastrectomy if similar long-term outcomes can be achieved. Previous studies showed that the long-term survival rates of patients who underwent LATG were similar to those of patients who underwent OTG, but these reports primarily examined small cohorts of patients who underwent LATG for EGC. A case control study [14] reported that the long-term outcomes of LATG were similar to those of open OTG for patients with AGC. Moreover, Kim et al. [19] found that the long-term oncologic outcomes of laparoscopic gastrectomy for 238 patients with AGC were consistent with those of open gastrectomy in a case-controlled and case-matched study. Although the oncological results of the LATG group were similar to those of the OTG group for the pre-matched patients, the cumulative survival rate of patients with stage I gastric cancer in the LATG group was significantly lower than that in the OTG group. This difference may be due to the heterogeneity of the two groups. Specifically, the proportion of undifferentiated histology was higher in the LATG group than the OTG group, and the cumulative survival rate did not significantly differ between the two groups after the propensity score-matched analysis. These results suggested that the long-term outcomes achieved by LATG and OTG were comparable.

Our study was also subject to several limitations. We conducted the study at a single center in a retrospective manner, and patients who experienced recurrence were not described in detail due to incomplete follow-up results. Nonetheless, to the best of our knowledge, this study examined the largest number of patients with advanced gastric cancer who have undergone LATG at a high-volume center and used the propensity score-matching method to reduce bias.

In conclusion, LATG is a safe and reliable procedure for the treatment of gastric cancer when conducted by experienced surgeons at high-volume institutions. The morbidity and mortality of LATG is acceptable when compared with OTG, and oncologic outcomes are similar in both groups. Additional randomized controlled clinical trials can be conducted to provide valuable evidence of the safety and efficacy of LATG in treating gastric cancer.

Between January 2005 and June 2012, 1096 patients who were diagnosed with primary gastric cancer and underwent total gastrectomy for their gastric cancer were identified using a prospectively maintained gastric cancer database at the Department of Gastric Surgery, Fujian Medical University Union Hospital, China. OTG and LATG were concurrently performed. Ultimately, 510 patients were treated with LATG, and 586 patients were treated with OTG. The inclusion criteria were defined as follows: histologically proven gastric carcinoma, no distant metastasis, tumors located in the upper two-thirds of the stomach or throughout the stomach, gastric cancer patients who were treated with a total gastrectomy and an R0 resection performed according to the surgical and pathological findings. The exclusion criteria were defined as follows: stage T4b or distant metastasis, treatment with preoperative chemotherapy or radiotherapy, a lack of a pathological diagnosis, remnant gastric cancer, palliative gastrectomy or an emergency operation with bleeding or perforation. Lymph node dissection was performed according to the Japanese gastric cancer treatment guidelines [30, 31]. The data on the extent of lymphadenectomy were retrospectively revised according to a recently published version of these guidelines [31]. Tumor staging was based on the 7th edition of the pathological (pTNM) classification of the Union for International Cancer Control (UICC)/American Joint Committee on Cancer (AJCC). The comorbidities were staged according to the Charlson comorbidity index [32]. The severity of postoperative complications was classified according to the Clavien-Dindo classification system [27]. All patients were informed of the possible complications and given a full detailed explanation of each surgical method as well as the advantages and disadvantages of LATG versus conventional OTG. All patients selected their surgery, and written informed consent was obtained prior to the surgery. Adjuvant chemotherapy using 5-fluorouracil (5-FU)-based regimens (mostly Oxaliplatin with either Xeloda or S1) was recommended to the majority of patients with advanced gastric cancer.

Specially trained researchers used outpatient records, visitation, letters and telephone calls to follow up with patients after their operation. Patients were followed up every 3 months for 2 years and then every 6 months from postoperative years 3 to 5. All patients were followed for at least 3 years after surgery. Survival time was defined as the time from surgery to either death or the final follow-up date of March 2016.

Statistical analysis was performed using SPSS v13.0 for Windows (SPSS Inc., Chicago, IL). Categorical variables were analyzed using the Chi-squared or Fisher’s exact test, whereas continuous variables were analyzed using either the unpaired Student’s t-test or the Mann-Whitney U test. Multiple factor logistic regression models [33] were used to calculate the propensity score for each patient, and we imposed a caliper width of 0.02 of the standard deviation of the logistic of the propensity score. Patients in the LATG group were individually matched to patients in the OTG group according to the nearest neighbor matching principle and the non-replacement principle (i.e., a single case cannot be used multiple times). Multivariate analyses were performed by binary logistic multiple regression tests to identify independent risk factors for postoperative morbidity. Cumulative survival rates were estimated using the Kaplan-Meier method and compared with the log-rank test. Two-sided P values less than 0.05 were considered to be significant.

This study was funded by the National Key Clinical Specialty.

The authors are thankful to Fujian Medical University Union Hospital for her management of our gastric cancer patient database.

33. D’Agostino RB Jr. Propensity score methods for bias reduction in the comparison of a treatment to a non-randomized control group. Stat Med. 1998; 17:2265–81.