As a bile duct epithelium cancer, cholangiocarcinoma is the second most common primary hepatic malignancy after hepatocellular carcinoma, and accounts for 10–20% of primary liver cancers [1, 2]. Even amongst those able to undergo radical resection, the recurrence risk is high and the 5-year overall survival is only 30% [3]. One of the first-line chemotherapeutic agents, cisplatin, has been universally found to benefit individuals with advanced, unresectable or metastatic gallbladder cancer [4, 5]. The current standard first-line treatment for unresectable CCA is combination treatment with gemcitabine and cisplatin, however, drug resistance is common and the prognosis of patients is universally poor [6]. Future studies which focus on how to eliminate the incidence of drug resistance are essential.

Mammalian target of rapamycin (mTOR), an atypical serine/threonine kinase, is activated in numerous cancers, regulating cell proliferation, growth, differentiation, migration, and survival [7]. Recent studies have revealed that inhibition of mTOR signaling using rapamycin can enhance sensitivity of cancer cells to cisplatin and doxorubicin [8, 9]. Our previous studies also revealed that inhibition of mTOR suppresses human gallbladder carcinoma cell proliferation and enhances the cytotoxicity of 5-fluorouracil (5-FU) by regulating MDR1 expression [10]. However, little is known about the role of mTOR in cholangiocarcinoma.

Evidence collected to date shows that microRNAs can regulate the mTOR signaling pathway and affect cancer cell sensitivity to chemotherapy drugs [11]. MiR-199a-3p has been shown to have significantly downregulated expression in several cancers [12–17]. Several previous studies indicated that miR-199a-3p may target mTOR and affect cell proliferation, and that drug resistance is modulated through inhibition of mTOR [18–22]. However, in cholangiocarcinoma, the role of miR-199a-3p and its relationship with mTOR are unknown.

To investigate the function of miR-199a-3p in cisplatin sensitivity of cholangiocarcinoma cell lines, we used a CCK-8 assay to study the cell viability of cholangiocarcinoma cells (GBC-SD and RBE) under different concentrations of cisplatin. We found the viability of those cell lines declined depending on the cisplatin concentration (0 μg/ml, 0.5 μg/ml, 1.0 μg/ml, 1.5 μg/ml, 2.0 μg/ml) (Figure 1A). RBE cells were more sensitive to cisplatin than GBC-SD cells (RBE IC50: 1.044 μg/ml; GBC-SD IC50: 1.966 μg/ml). Interestingly, the RBE cell line, which had higher expression of miR-199a-3p (Figure 1B, **P < 0.01 vs. GSC-SD), was more sensitive to cisplatin. Thus, high expression of miR-199a-3p may lead to greater sensitivity to cisplatin treatment. 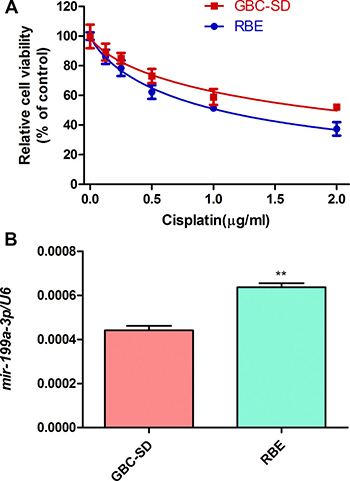 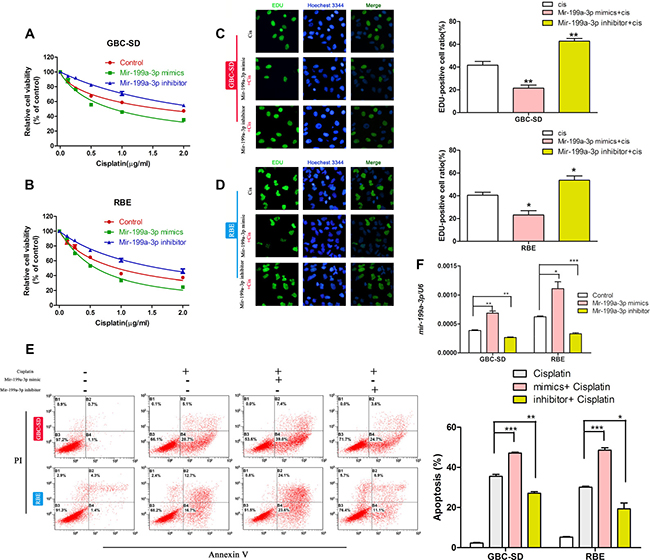 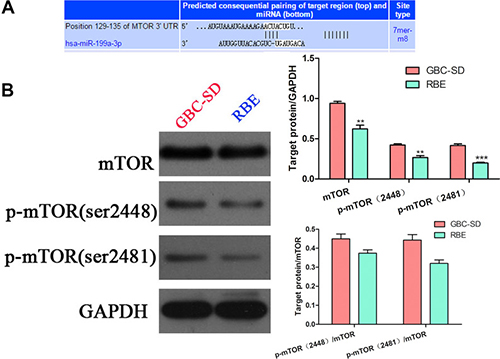 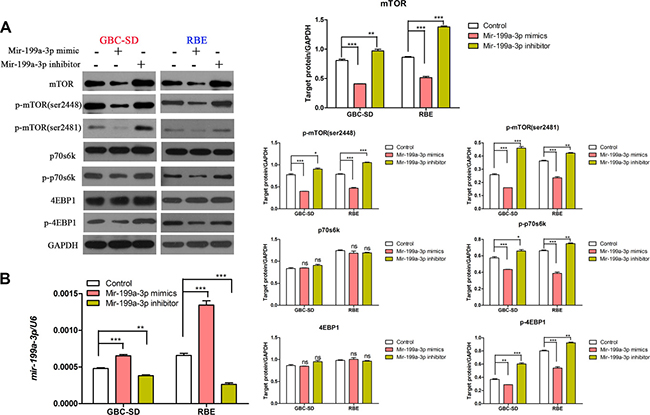 To further prove that miR-199a-3p could affect the sensitivity of cholangiocarcinoma to cisplatin by regulating the activity of the mTOR signaling pathway, we performed a rescue experiment. CCK-8 assay showed that suppression of mTOR led to greater sensitivity to cisplatin in GBC-SD and RBE cell lines, but the sensitivity of cholangiocarcinoma cells with mTOR knockdown to cisplatin was not changed when treated with miR-199a-3p mimics or inhibitor (Figure 5A–5B) (***P < 0.001). The efficiency of mTOR siRNA was confirmed by Western blot in both the GBC-SD and RBE cell lines (Figure 5C). These results indicated that the role of miR-199a-3p in regulating cisplatin sensitivity was mediated by the mTOR pathway. 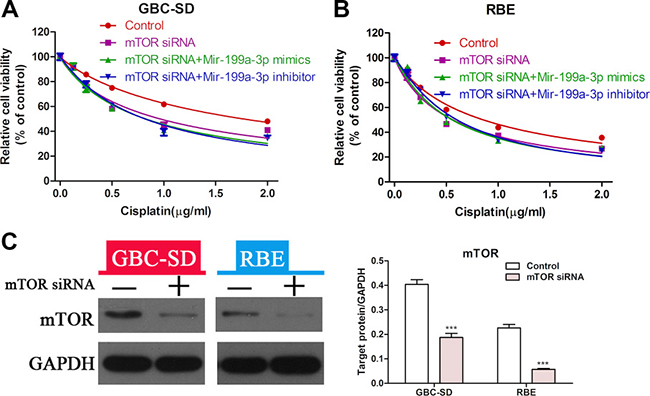 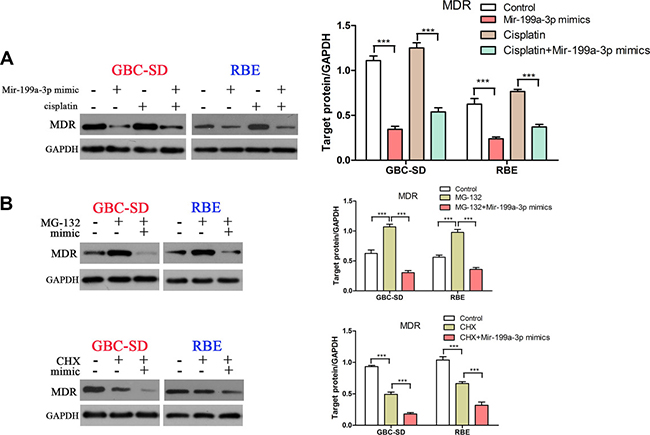 Figure 6: MiR-199a-3p inhibited cisplatin induced MDR1 expression. (A) Protein level of MDR1 was detected in GBC-SD and RBE cell lines under treatment with miR-199a-3p mimics or cisplatin or both. The results were quantified using ImageJ software. (B) Protein expression of MDR1 was detected under treatment with MG-132 or miR-199a-3p mimics or both (upper panel), and the same with CHX (lower panel). The results were quantified using ImageJ (***P < 0.001).

MTOR, a ubiquitously expressed serine/threonine (Ser/Thr) kinase, is reported to play a crucial role in cancer progression by regulating cell proliferation, metabolism, drug resistance and other biological processes [36–38]. Inhibitors of mTOR, such as miRNAs, can inhibit tumor cell growth in many cancers by blocking the AKT/mTOR signaling pathway [39–41, 37]. Previous studies indicated that miR-199a-3p is an inhibitor of mTOR, and miR-199a-3p plays a role as a tumor suppressor by targeting mTOR in several cancers [18–20]. However, no study has reported the relationship between miR-199a-3p and mTOR in cholangiocarcinoma. Results from our study imply that miR-199a-3p plays a critical role as an inhibitor of mTOR in cholangiocarcinoma. Overexpression of miR-199a-3p led to a lower level of protein expression of mTOR and p-mTOR by binding the mTOR gene 3′-UTR and then regulating the phosphorylation status of 4E-BP1 and p70S6K. Above all, we demonstrated that miR-199a-3p could enhance the cisplatin sensitivity of cholangiocarcinoma by inhibiting the mTOR pathway.

ATP-binding cassette (ABC) transporter ABCB1 (P-glycoprotein/MDR1), a member of the ABC transporter family, has been investigated intensely for its association with drug resistance [42]. In our previous study, we demonstrated that MDR1 was regulated by the mTOR signaling pathway, and inhibition of the mTOR signaling pathway potently sensitized gallbladder cancer cells to 5-FU in vitro by suppressing the expression of 5-FU-induced MDR1 [10]; thus, we considered whether MDR1 was also involved in miR-199a-3p-mediated cisplatin-high-sensitivity in cholangiocarcinoma cells. Our results showed that the miR-199a-3p could reduce cisplatin-induced MDR1 expression, leading to high cisplatin sensitivity in cholangiocarcinoma cells. To further study the mechanism of miR-199a-3p in regulating MDR1 expression, we used two specific drugs to treat the cholangiocarcinoma cell lines. One was MG132, which can inhibit the ubiquitin degradation of MDR1 [43], the other was CHX, which can inhibit the synthesis of MDR1 [44]. As expected, the results showed that miR-199a-3p increased the cisplatin sensitivity of cholangiocarcinoma cell lines both by decreasing the synthesis of MDR1 and increasing the degradation of MDR1.

Two human cholangiocarcinoma cell lines, RBE and GBC-SD, were purchased from the American Type Culture Collection (ATCC; Manassas, VA, USA) and cultivated according to the protocols described by ATCC. Cells were cultured in RPMI-1640 medium (Gibco, Grand Island, NY, USA) supplemented with 10% fetal bovine serum and maintained at 37°C in a humidified incubator under 5% CO2.

To detect relative cell viability, RBE and GBC-SD cell lines were seeded into 96-well microplates at a density of 5,000 cells per well. After 24 h for cell attachment, the culture medium was replaced with complete medium containing different concentrations of cisplatin (μg/ml) for 48 h. The cell counting kit-8 (CCK-8) assay (Dojindo, Kumamoto, Japan) was then performed according to the manufacturer’s instructions. Briefly, 10 μL of CCK-8 working solution per 100 μL of medium was added into the microplates and the cells were incubated for 3 h. The OD 450 nm value was determined using a MRX II microplate reader (Dynex, Chantilly, VA, USA).

RBE or GBC-SD cells were treated with miR-199a-3p mimics, inhibitor or negative control for 48 h. Then, under treatment with 1 μg/ml cisplatin for 48 h, EdU staining was performed by using the Click-iT EdU Imaging Kit (Invitrogen, Carlsbad, CA, USA) following the manufacturer’s instructions. Three randomly selected fields of view per slide were selected under a fluorescence microscope (Olympus, Tokyo, Japan) and the number of proliferative cells (EdU positive) was counted.

MiR-199a-3p mimics, inhibitors and negative control were synthesized by GenePharma (GenePharma Co. Ltd, China). SiRNAs specifically targeting mTOR were synthesized by Shanghai GeneChem Co. Ltd. (Shanghai, China). Transfection was conducted using lipofectamine 2000 (Invitrogen) according to the manufacturer’s instructions. The knockdown efficiency of mTOR siRNA was determined by Western blot analysis, and the efficiency of miR-199a-3p mimics and inhibitor were confirmed by PCR analysis.

RBE and GBC-SD cells were treated with miR-199a-3p mimics, inhibitor or negative control for 48 h, following which the culture medium was replaced with complete medium containing different concentrations of cisplatin (μg/ml) for 48 h. After this, cells were trypsinized and washed three times with prechilled phosphate-buffered saline (PBS) and resuspended in 100 μL PBS. Apoptotic RBE and GBC-SD cells were measured with APC-conjugated annexin-V and a propidium iodide (PI) kit according to the manufacturer’s instructions (Dojindo, Kumamoto, Japan), and analyzed using a flow cytometer and FlowJo software.

Total RNA was extracted from RBE and GBC-SD cell lines using TRIzol reagent (Invitrogen) following the manufacturer’s protocol. First-strand cDNA was generated using a Reverse Transcription System Kit (Promega Corporation, Madison WI). Primers for miR-199a-3p were purchased from Takara (Dalian, China). Expression of miR-199a-3p was measured by qPCR with an ABI7500 Fast System (Applied Biosystems, CA) and SYBR green dye (Takara). U6 was used as an internal control, and the 2−ΔΔCt method was used for relative quantification. All reactions were performed in triplicate.

Three independent experiments were performed for each study. Comparisons among datasets were performed using one-way analysis of variance (ANOVA) tests or t-tests. *P < 0.05, **P < 0.01 and ***P < 0.001 were considered statistically significant.