Colorectal cancer represents the third most common cancer around the world [1]. Because of the liver metastases in early stage, colorectal cancer is realized as the “leading killer”, which has become a serious threat to human life and health [2, 3]. For treatment of colorectal cancer, chemotherapy is efficient initially. However, as the continuous use of anti-tumor drugs, colorectal cancer cells show lower response to them gradually [4]. Recently, studies demonstrate that cancer stem cells (CSCs) are responsible for drug-resistance in various cancers [5–7], which emphasizes the significance of targeting CSCs in cancer therapy. CSCs are highly self-renewing and tumorigenic cells in tumor. They show obvious chemoresistance and play key roles in chemotherapy failure and cancer relapse [8, 9]. Previous studies have identified that CD133 on cell surface is the marker of colorectal CSCs [10]. It is urgent to explore the mechanism by which colorectal CSCs develop their resistance to anti-tumor drugs for improving the efficiency of cancer therapy.

In TNF superfamily, the cytokine of TNF-related apoptosis-inducing ligand (TRAIL) is considered as a potential anti-tumor agent. Treatment with TRAIL effectively kills multiple cancer cells, such as hepatocellular carcinoma cells and colorectal cancer [11, 12]. As TRAIL induces significant apoptosis selectively in tumor cells without influencing the function of normal cells, it has been tested in clinical trials for treatment of various cancers [13]. However, CSCs, which are the special population in cancers, are reported to be resistant to TRAIL treatment [14]. It is significant to overcome this obstacle in TRAIL therapy by targeting the colorectal CSCs.

MicroRNAs are small and non-coding RNAs exist in cells. They are endogenous and involved in regulating the expression of human genes. MicroRNAs induce degradation of targeting mRNA by pairing with partially complementary sequence in the 3′-untranslated region [15]. As microRNAs regulate about 60% of the human genes, they participate in various biological processes in cells [16, 17]. In cancer, microRNAs are often dysregulated. Correcting the dysregulation of microRNAs has been reported to inhibit cell proliferation, metastasis, survival and chemoresistance of cancers [18–20]. In the present study, we found that expression of microRNA-27a (miR-27a) was increased in colorectal CSCs rather than their corresponding colorectal cells. Moreover, knockdown of miR-27a was found to sensitize the colorectal CSCs to TRAIL treatment. We aim to explore the molecular mechanism of miR-27a antioligonucleotides on promoting the TRAIL-induced apoptosis in colorectal CSCs. 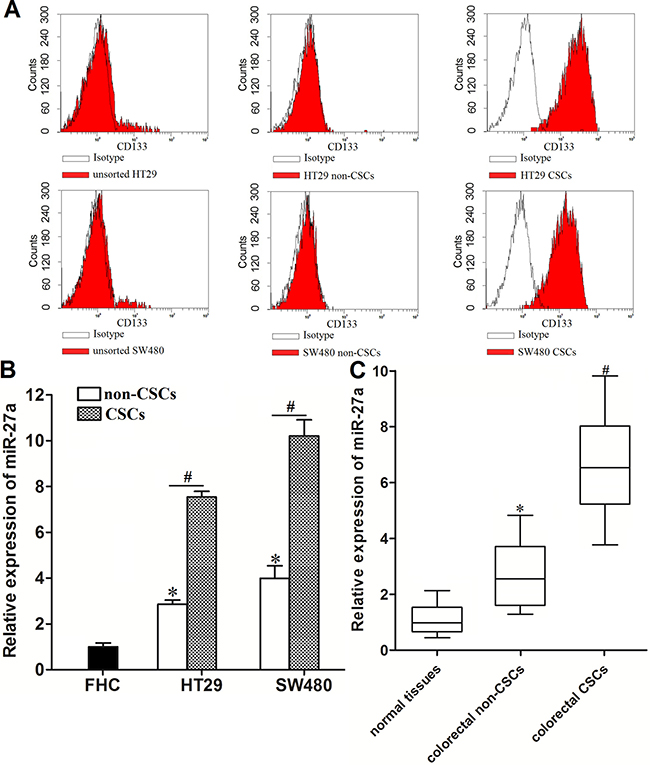 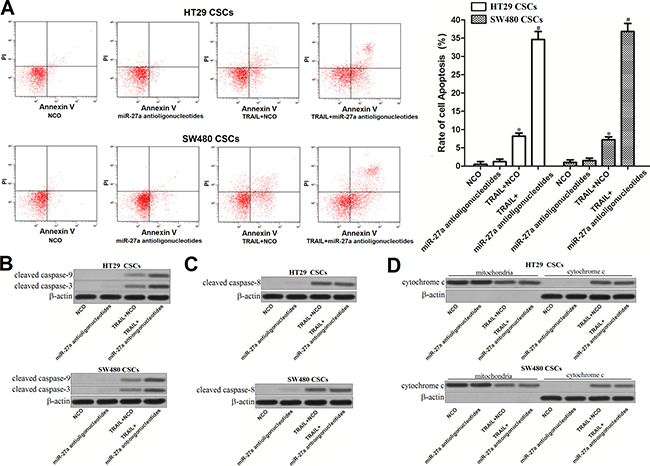 To explore the mechanism by which miR-27a antioligonucleotides facilitated TRAIL-induced apoptosis in colorectal CSCs, we searched the target gene of miR-27a on the public microRNA database of TargetScan (http://www.targetscan.org/). Apoptotic protease activating factor-1 (Apaf-1), which was identified as pro-apoptotic gene [21], contained conservative 3′ UTR sequence at the miR-27a binding site (Figure 4A). In addition, results of western blot analysis showed that expression of Apaf-1 was decreased in colorectal CSCs compared to their corresponding non-CSCs (Figure 4B and 4C). Because of the negative correlation between the expression of miR-27a and Apaf-1, we inferred that Apaf-1 gene was the target of miR-27a in colorectal CSCs. Luciferase assays revealed that miR-27a mimics suppressed reporter gene activity in both HT29 CSCs and SW480 CSCs. On contrary, miR-27a antioligonucleotides increased the reporter gene activity in them (Figure 4D). Furthermore, after transfection with miR-27a antioligonucleotides, the protein level of Apaf-1 was significantly increased in both HT29 and SW480 CSCs (Figure 4E). These results demonstrated that the Apaf-1 gene was the target of miR-27a, knockdown of which increased the expression of Apaf-1 in colorectal CSCs. 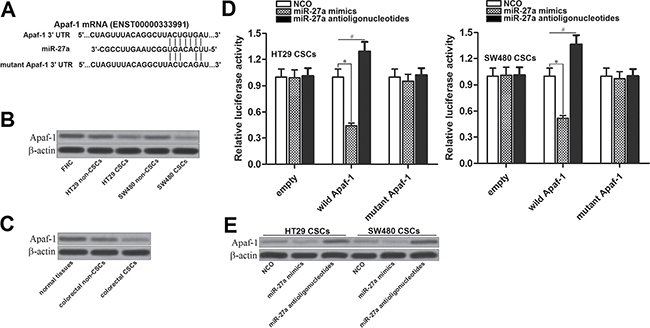 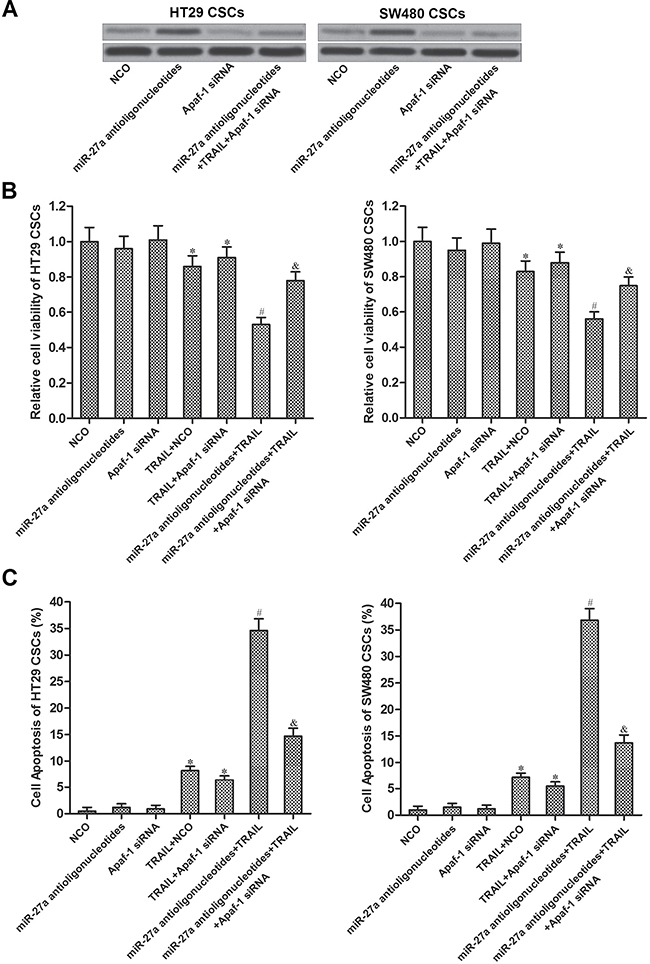 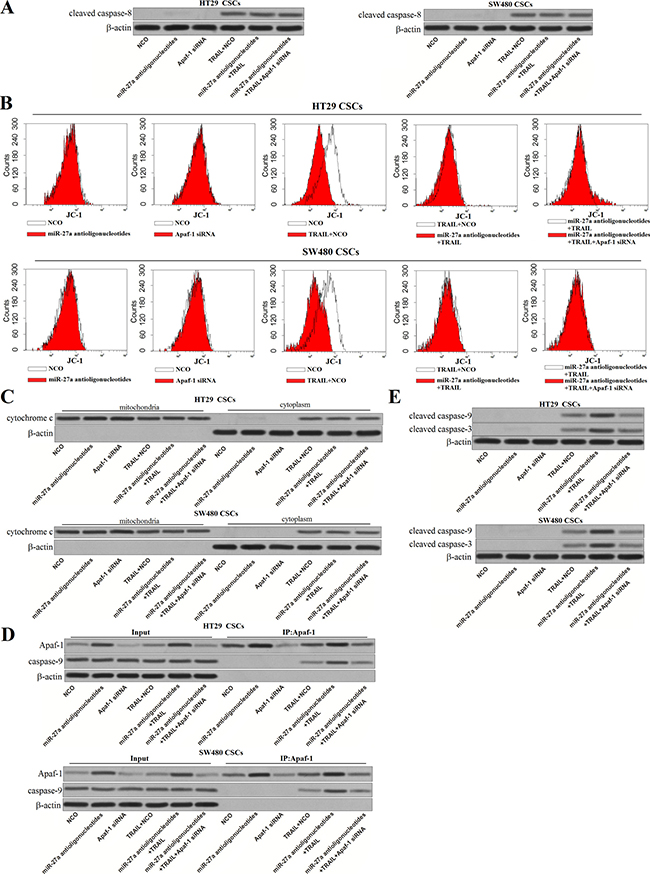 MicroRNA-27a (miR-27a) has been reported to function as an oncogene in multiple cancers. Overexpression of miR-27a was found to markedly promote cell proliferation, migration, invasion and epithelial-mesenchymal transition in different cancers including colorectal cancer [27–30]. Furthermore, previous researches demonstrated that increased expression of miR-27a is involved in resistance to chemotherapy in cancers [31, 32]. In this study, we demonstrate that miR-27a is overexpressed in colorectal cancer, especially in the CD133 positive stem-like cell population of colorectal cancer (colorectal CSCs). Interestingly, although the colorectal CSCs showed obvious resistance to TRAIL treatment, knockdown of miR-27a by its specific antioligonucleotides resensitized them to TRAIL.

TRAIL has been considered as a promising new therapeutic drug for cancers, which induces death of cancers by triggering apoptosis pathway [33]. After administration with TRAIL, it binds to death receptors 4/5 (DR4/5) to form a death-inducing signaling complex (DISC). DISC then recruits pro-caspase-8 and triggers it. Subsequently, cleaved caspase-8 decreases the potential of mitochondrial membrane and induces the formation of mitochondrial membrane pore. Cytochrome c, which is recognized as an apoptotic inducer, is then released into cytoplasm from the damaged mitochondria [34–37]. In the presence of cytochrome c and dATP, pro-caspase-9 is recruited to Apaf-1 to form the Apaf-1/caspase-9 apoptosome. As the results, caspase-9 and its substrate of caspase-3 are activated, and finally, apoptosis occurs [38]. 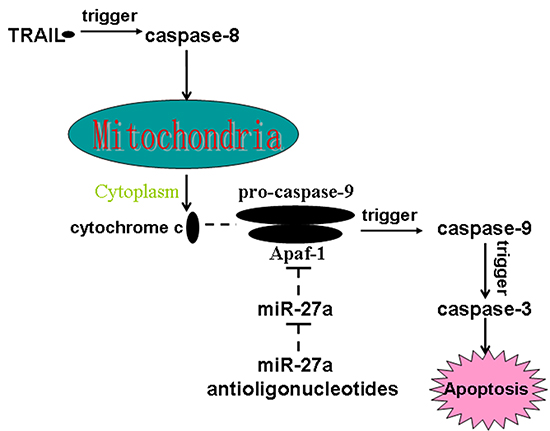 Figure 7: Schema of the mechanisms implicated in miR-27a antioligonucleotides-sensitized apoptosis in TRAIL-treated colorectal CSCs. MiR-27a antioligonucleotides promote TRAIL-dependent formation of Apaf-1/caspase-9 complex by increasing the expression of Apaf-1. As a result, caspase-9 is triggered, followed by activation of caspase-3 and occurrence of apoptosis finally.

A total of 25 primary colorectal cancer tissues and their corresponding non-tumor normal tissues were obtained from patients who underwent tumor resection in Cancer Hospital of China Medical University from 2/2014 to 10/2016. Tumor tissues were digested by using collagenase type III (Worthington Biochemical, USA) to obtain the single cell suspension. The tumor specimens used in the present study were obtained with the approval of the ethics committee of Cancer Hospital of China Medical University, and all of the patients had given their informed consent.

Analysis of CD133 by flow cytometry and cell sorting

Colorectal cancer cells were seeded in 96-well plates at a density of 5 × 103 cells/well overnight. Cells were then transfected with RNA oligonucleotides and treated with different concentrations of TRAIL subsequently. After treatment, CCK-8 detection kit (Sigma-Aldrich, USA) was used to measure cell viability according to the manufacturer’s protocol. Briefly, 20 μl/well CCK-8 was added to the medium and incubated at 37°C for 2 h. The absorbance at 450 nm was measured by a microplate reader to determine viable cells. Half maximal inhibitory concentration (IC50) of TRAIL to colorectal cancer cells was calculated according to the cell viability curves conducted by CCK-8 assays.

Cells were harvested and incubated with lysis buffer (Cell Signaling Technologies, USA) for 10 min on ice. Cellular debris was removed by centrifugation for 5 min at 12,000 g to collect the supernatant. Protein lysates were incubated with primary antibody of Apaf-1 (Cell Signaling Technologies) overnight at 4°C, followed by followed by addition of protein G agarose beads for 2 h at 4°C. Immunoprecipitates were washed with cold lysis buffer three times, and subsequently boiled with sodium dodecyl sulfate (SDS) sample buffer.

All values were depicted as mean ± standard deviation and carried out by three independent experiments. All data were statistically analyzed by Student’s t-test or one-way ANOVA with a Bonferroni correction using SPSS 15.0 software. Values of P < 0.05 were considered significant.