Cervical cancer (CC) is the second most common cancer in females worldwide [1]. Reports have suggested that human papillomavirus (HPV), such as HPV 16 and 18, are well established as an etiological agent for CC and have the ability to transform normal cervical cells into neoplastic cells [2, 3]. However, infection with HPV by itself is thought to be insufficient for the malignant transformation of HPV infected normal cervical cells [4]. Recently, with the deepening research on CC, it has been confirmed that HPV infection along with persistent chronic inflammation can induce carcinogenesis [2, 4].

Toll-like receptors (TLRs) are a system of innate immune defense. It has been well established that HPV induce TLR4 expression and interfere in TLR4-NF-κB pathways, leading to persistent chronic inflammation and carcinogenesis [5–7]. Our recent study showed that LPS induced the activation of TLR4-NF-κB pathway in CC SiHa (HPV16+) cells, but not in HeLa (HPV18+) and C33A (HPV-) cells [5]. Increasing evidences have shown that resistance to chemotherapy is strongly dependent on the HPV infection and the activation of TLR4-NF-κB pathways in CC [6, 8, 9]. The TLR4-NF-κB pathway and its regulation are highly complicated, and may lead to cancer invasion and chemoresistance in multiple ways, including modulation of the tumoural microenvironment through the production of inflammatory mediators, such as IL-1β [8–10].

CD200, a membrane glycoprotein of the immune-globulin superfamily, have been shown strong effect on immune suppression via the interaction with its receptor CD200R [16, 17]. Experimental studies have demonstrated that CD200-CD200R axis plays a key role in the modulation of inflammatory responses in autoimmune diseases and neuro-degeneration [17, 18]. Soluble CD200 fusion protein (CD200Fc) is a CD200 fusion protein consisting of the extracellular domain of CD200 bound to a murine IgG2aFc sequence and modified to eliminate Fc receptor and complement binding regions [19, 20]. Recent reports have showed that the effects of CD200Fc in attenuating the release of pro-inflammatory cytokines and glial cell activation [21] in neuro-inflammatory diseases [20, 22, 23]. Nevertheless, recent knowledge remains limited as to the anti-inflammatory effects of CD200Fc in LPS-induced SiHa cells and Caski cells.

Therefore, the goal of our present study was to explore whether CD200Fc might regulate LPS-induced IL-1β activation in human CC SiHa cells and Caski cells. Furthermore, efforts have been taken to identify the TLR4-NF-κB and NLRP3 inflammasome pathways underlying the anti-inflammatory effect of CD200Fc.

Firstly, the effects of CD200Fc on the production and activation of IL-1β from LPS-simulated SiHa cells and Caski cells were evaluated. Western blot results showed that LPS stimulation significantly enhanced the pro-IL-1β and cleaved IL-1β level relative to that observed in the un-stimulated cells (Figure 1A–1B and 1D–1E). The production of pro-IL-1β and cleaved IL-1β in response to LPS was significantly inhibited by CD200Fc in a dose-dependent manner. In addition, qRT-PCR results (Figure 1C and 1F) and ELISA analysis (Figure 1G and 1H) showed that CD200Fc inhibited the secretion of pro-IL-1β after LPS exposure. However, no apparent change of IL-1β production and activation was observed between control and 100 μM CD200Fc treatment in normal conditions. 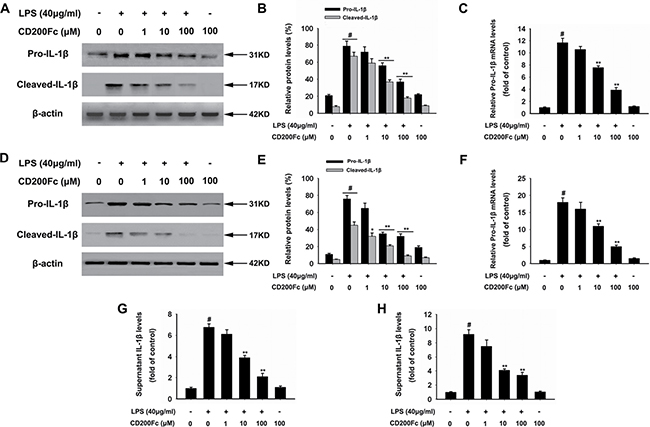 The NLRP3 inflammasome components, such as NLRP3 and ASC, are the initiators of inflammatory responses[11]. Western blot results showed that the protein expression of NLRP3 in SiHa cells and Caski cells was significantly increased 3 hours after LPS stimulation (Figure 2A–2D). The addition of CD200Fc to the cells reduced the protein expression of NLRP3. In addition, qRT-PCR results showed that incubation with CD200Fc dose-dependently inhibited this LPS-induced mRNA expression of NLRP3 (Figure 2E–2F). However, no apparent protein and mRNA change of ASC was observed in LPS and/or CD200Fc treatment group (Figure 2A–2F). 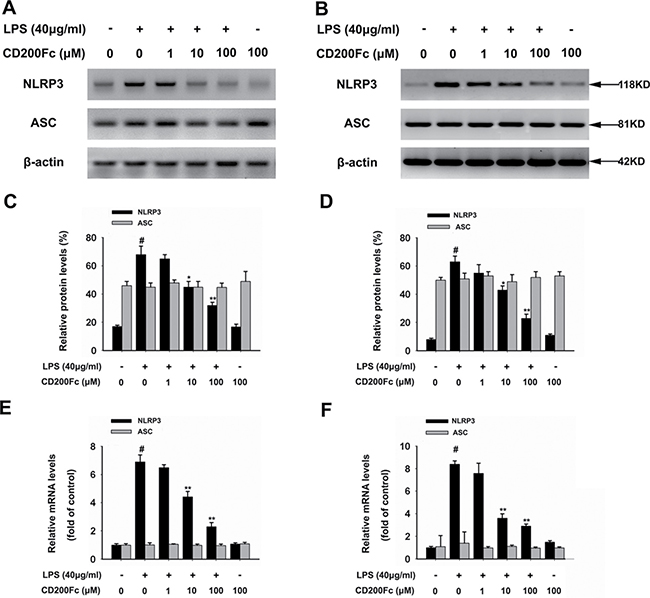 Caspase-1 is a member of a family of caspases with large prodomains, and its activation is required to cleave pro-IL-1β into IL-1β [15]. Therefore, western blot analysis and immunofluorescent staining were used to determine whether CD200Fc treatment affected the cleavage of caspase-1 in LPS-stimulated SiHa cells and Caski cells. As shown in Figure 3, LPS increased the cleavage of caspase-1, while treatment with various doses of CD200Fc reduced the cleaved forms of caspase-1 in SiHa cells and Caski cells. In addition, no apparent protein change of pro-caspase-1 was observed in LPS and/or CD200Fc treatment group (Figure 3). These results suggested involvement of the NLRP3 inflammasome during CD200Fc mediated anti-inflammatory effects in LPS-stimulated SiHa cells and Caski cells. 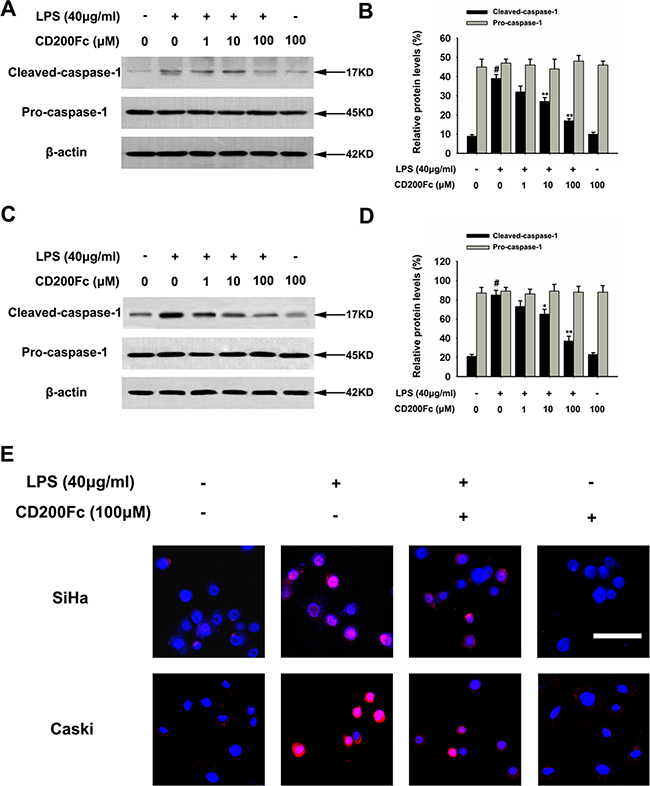 TLR4 is a key regulators involved in regulating the LPS-induced inflammatory mediators expression through the activation of NF-κB pathway [8]. As shown in Figure 4A–4B and 4E–4F, treatment with CD200Fc reduced the protein expression of TLR4, which was induced by LPS for 90 min in SiHa cells and Caski cells. 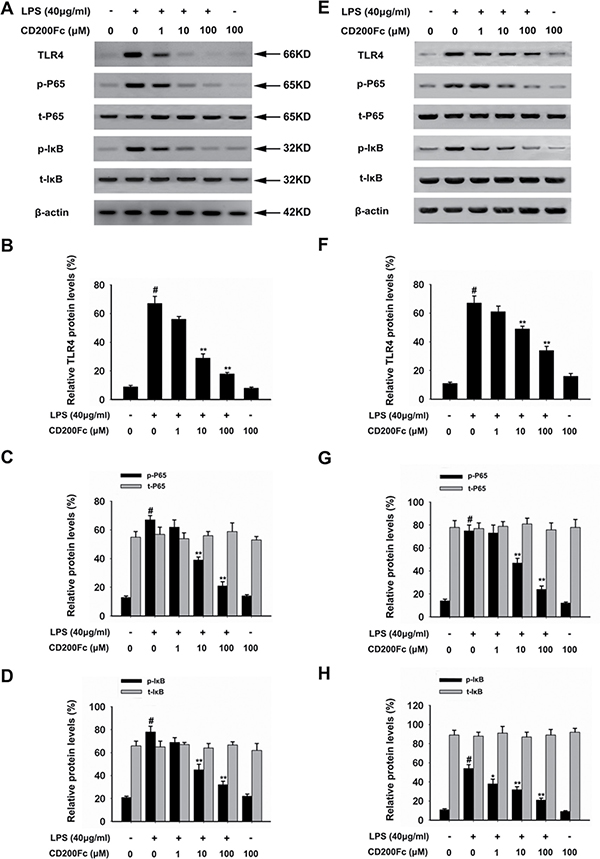 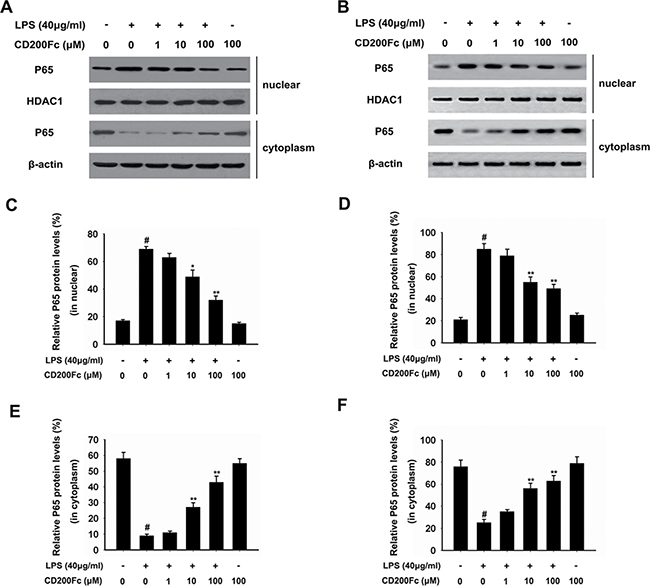 The model of immunological stress provided by LPS in vitro or in vivo is generally used to increase the release of excessive inflammatory mediators, such as IL-1β, and also causes the tumorigenesis of CC [5, 24]. Our previous study have shown that LPS stimulation activates the TLR4-NF-κB pathway in SiHa cells by acting on TLR4 to activate NF-κB, and consequently activates the expression of inflammatory mediators, such as IL-1β [5]. However, almost no information is available concerning whether LPS stimulation could activates the NLRP3 inflammasome pathway in SiHa cells and Caski cells. The present study firstly showed that LPS stimulation enhanced the mRNA and protein expression of NLRP3 inflammasome components NLRP3 and cleaved-caspase-1 in SiHa cells and Caski cells, which illustrated that NLRP3 inflammasome pathway might also play a role in the tumorigenesis of CC.

CD200-CD200R axis is a regulatory system of inflammation that plays a critical role in various diseases, a strengthened inflammatory response was usually observed when the CD200-CD200R conjugation was impaired [16, 17]. In contrast, enhanced expression of CD200R by CD200Fc treatment alleviates pathological effects of inflammation [16, 17, 21, 23, 25]. However, the anti-inflammatory effects of CD200Fc in CC have not heretofore been investigated. The present study provided the first evidence that CD200Fc attenuated LPS-induced production and activation of IL-1β, as well as mechanical inhibition of TLR-NF-κB and NLRP3 inflammasome pathways.

IL-1β is considered to be an endogenous pyrogen and also plays a vital role in promoting a variety of innate immune processes associated with infection, inflammation and autoimmunity [14, 15]. It appears that IL-1β can contribute to the pathogenesis of HPV-infected cervical carcinoma. Recent studies have shown that IL-1β is associated with development of cervical carcinoma with persistent HPV16/18 infection [26]. Recently, a meta-analysis suggested that the IL-1β polymorphisms may contribute to genetic susceptibility of CC [27, 28]. In addition, Niebler et al. found that attenuation of IL-1β by the HPV16 E6 oncoprotein in HPV-positive cervical carcinoma immortalized cells is apparently a crucial step in viral immune evasion and initiation of malignancy of CC [29]. Moreover, recent studies showed that CD200Fc suppressed the LPS-induced release of IL-1β in rat primary microglial cells [21] and human renal proximal tubular epithelial cells [23]. The present study showed, for the first time, that the addition of CD200Fc could significantly reduce the LPS-induced production and activation of pro-IL-1β and cleaved-IL-1β in SiHa cells and Caski cells.

The generation of pro-IL-1β and cleaved (mature)-IL-1β is tightly controlled by the NLRP3 inflammasome, which has been intensively studied [15, 30]. Upon sensing danger signals such as LPS, NLRP3 proteins oligomerize and recruit caspase-1 through ASC [15]. Subsequently, pro-caspase-1 undergoes an autocatalytic activation. Finally, mature caspase-1 cleaves pro-IL-1β to produce cleaved-IL-1β [14, 30, 31]. Pontillo et al. found that NLRP3 inflammasome pathway could affect HPV virus/persistence and cervical cancer progression [32]. Moreover, the findings of Abdul-Sater et al. demonstrated that NLRP3-dependent caspase-1 activation in cervical epithelial cells contributes to development of the chlamydial inclusion and cervical cancer progression [33]. For the first time, our findings demonstrated that the addition of CD200Fc could inhibit the mRNA and protein expression of NLRP3, and reduce cleaved caspase-1 production in a dose-dependent manner. This result indicated that the regulatory effects of CD200Fc on the activation of pro-IL-1β and cleaved-IL-1β might be partly attributable to the regulation of caspase-1 activation via NLRP3 inflammasome pathway in SiHa cells and Caski cells.

In conclusion, CD200Fc could inhibit LPS-induced production and activation of pro-IL-1β and cleaved-IL-1β. These effects might appear to be produced by the inhibition of LPS-induced activation TLR4-NF-κB pathway, the mRNA and protein expression of NLRP3, and lead to suppression of the activation of caspase-1 in SiHa cells and Caski cells (Figure 6). The anti-inflammatory activities of CD200Fc in SiHa cells and Caski cells may be attributed to the regulation of the TLR4-NF-κB and NLRP3 inflammasome pathways. It may be possible that the drugs act on one or all of the above process. Further studies will be carried out to determine the likely mechanism. 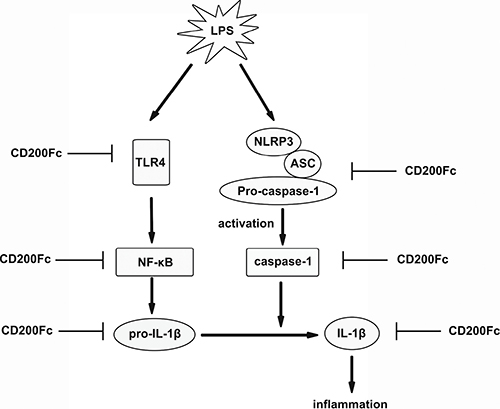 SiHa cells and Caski cells were purchased from Chinese Academy of Sciences and cultured in DMEM medium (Sigma, USA) supplemented with 10% fetal bovine serum (Gibco, USA), 100 units/mL penicillin and 100 μg/mL streptomycin (Sigma, USA). Cells were incubated in a humidified atmosphere with 5% CO2 at 37°C. Cells were seeded in 6-well plates (3 × 105 cells/well) and grew overnight to approximately 70% confluence and followed by stimulating with 40 μg/ml LPS under different concentrations (1, 10, 100 μM) of CD200Fc for 90 min or 12 hours. Untreated medium was used as a negative control in this study. CD200Fc was provided by Genentech Inc. (San Francisco, USA).

After washed with pre-chilled phosphate buffered solution (PBS), SiHa cells and Caski cells were harvested and lysed in cell lysate buffer (1 × RIPA, Cell Signaling Technology, USA) for 30 min and centrifuged at 12,000 g for 15 min at 4°C to collect the supernatant. The protein concentration was determined by Bradford Assay (Bio-Rad, USA) and 30 μg of protein was subjected to SDS-polyacrylamide gel electrophoresis (PAGE) and then transferred to a polyvinylidene difluoride membrane (Millipore, USA). After blocking with 5% nonfat milk containing 0.1% Tween 20 at room temperature for 2 hours, the membranes were incubated with the primary antibody at 4°C overnight. The primary antibodies against cleaved IL-1β (1:500), pro-IL-1β (1:800), cleaved-caspase-1 (1:300), pro-caspase-1 (1:500), ASC (1:800) were from Cell Signaling Technology (Danvers, MA). Primary antibody against NLRP3 (1:1,000) was from Novus Biologicals (Littleton, CO). Primary antibodies against TLR4 (1:1,000), p-P65 (1:600), t-P65 (1:600), p-IκB (1:500), or t-IκB (1:500) were from Sigma (St Louis, MO). Primary antibodies against HDAC1 (1:800) and β-actin (1:1,000) were purchased from Santa Cruz Biotechnology (Inc. USA). After incubating with horseradish peroxidase-conjugated secondary antibody (1:5000), protein was visualized using an enhanced chemiluminescence reagent (Thermo Pierce, USA). The levels of target protein bands were densitometrically determined using Quantity Ones 4.4.1 (Bio-Rad Laboratories, Berkeley, CA). The variation in the density of bands was expressed as fold changes compared with the control in the blot after normalized to β-actin.

Nantong government provided financial support in the form of the project in Nantong science and Technology Bureau of Jiangsu (BK2013021).

These authors declare no competing interests.