Gallbladder carcinoma (GBC) is a malignant cancer originating from the biliary tract. In recent years, the incidence and prevalence of GBC are increasing in the developed world [1–2]. In the locally advanced setting, they are treated with curative resection [3–4]. GBC is most often diagnosed at an advanced stage with lymph-node metastases because the early stages of GBC progression are largely asymptomatic [5]. A significant number of these patients ultimately die from metastatic disease [6]. Therefore, to clearly elucidate the mechanism of GBC biology and to design effective therapeutic strategies are very important for patients with GBC.

Long noncoding RNA (lncRNA) is a type of noncoding RNA greater than 200 nucleotides in length [7]. Recent studies showed that lncRNA can function as an oncogene or tumor suppressor in various malignant tumors [8]. Abnormal lncRNA expression has been implicated in the regulation of physiological and pathological processes of GBC, indicating that lncRNAs could be utilized for GBC diagnosis and prognosis [9–10]. HOXA cluster antisense RNA 2 (HOXA-AS2), a lincRNA located between and antisense to the human HOXA3 and HOXA4 genes [11]. Recently evidence has shown that HOXA-AS2 promote several tumorigenic features including survival, proliferation and invasion. However, the biological functions and significance of HOXA-AS2 in GBC has not yet been established. In this study, we found that HOXA-AS2 expression was upregulated in GBC tissues, and upregulation of HOXA-AS2 was also correlated with larger tumor size and advanced pathologic stage. Moreover, lncRNA HOXA-AS2 promotes GBC cell growth and invasion in vitro. These results suggest that HOXA-AS2 may be a potential biomarker for GBC diagnosis and gene therapy.

Differential expression of HOXA-AS2 in GBC tissues and cell lines

Figure 1: (A) HOXA-AS2 was detected in GBC tissues and adjacent noncancerous tissues by qRT-PCR; (B) qRT-PCR showing expression level of HOXA-AS2 in GBC cell lines. 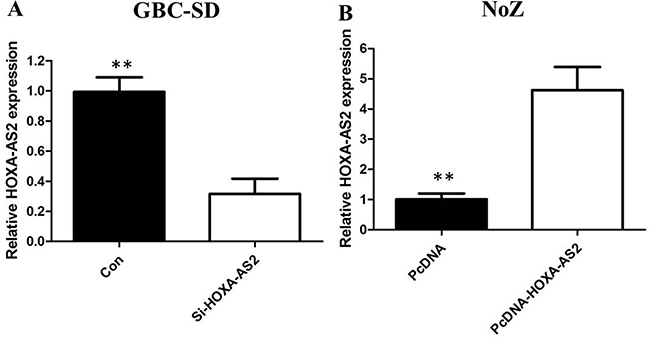 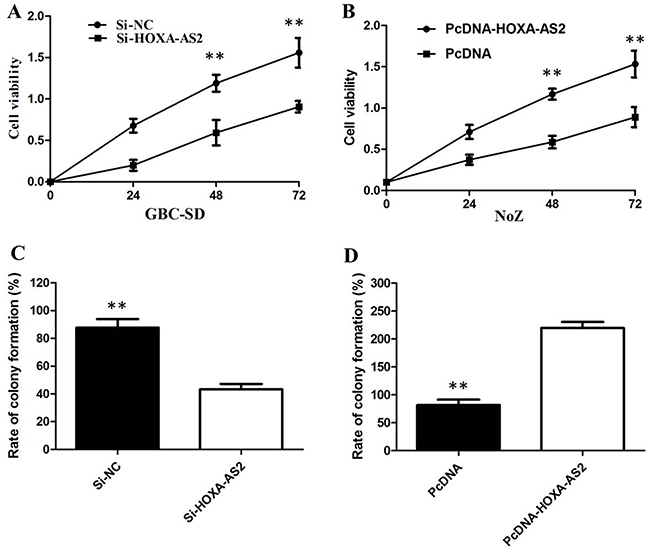 We preformed flow cytometry to determine whether the effect of HOXA-AS2 on GBC cells proliferation reflected cell apoptosis. The results showed that GBC-SD cells transfected with HOXA-AS2 siRNA had higher apoptotic rate in comparison with control cells (Figure 4A). Next, flow cytometric analysis revealed that knockdown of HOXA-AS2 resulted in cell arrest in G1 phase of cell cycle in GBC cell lines (Figure 4C). As expected, the cell apoptosis was markedly decreased by pcDNA-HOXA-AS2 (Figure 4B). Overexpression of HOXA-AS2 increased the S-phase percentage and decreased G0/G1 phase percentage of NoZ cells (Figure 4D). These data indicate that HOXA-AS2 could promote the proliferation phenotype of GBC cells by altering the apoptosis or cell cycle progression. 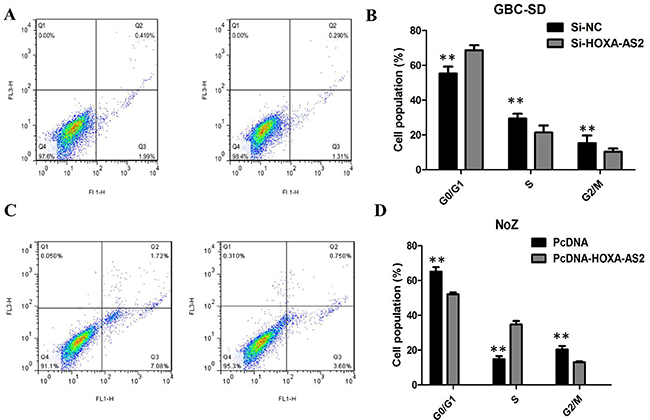 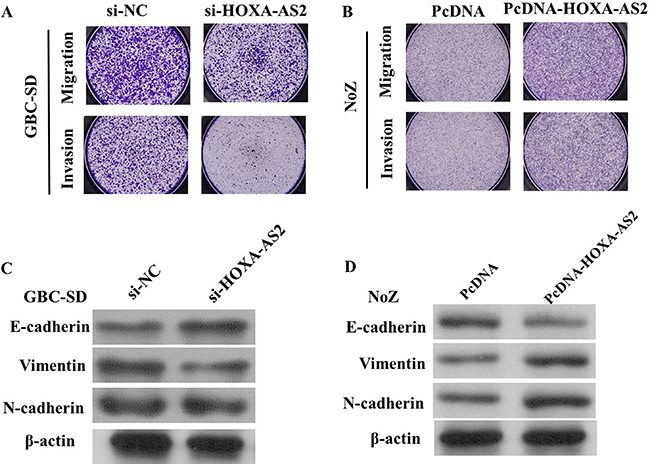 Figure 5: (A) The migration and invasion of GBC-SD cell line were significantly inhibited by si-HOXA-AS2; (B) The migration and invasion of NoZ cell line were significantly increased by si-HOXA-AS2; (C) Knockdown of HOXA-AS2 reversed EMT in GBC-SD cells; (D): Overexpression of HOXA-AS2 promoted EMT in NoZ cells

GBC is the most common malignancy of the bile duct. Due to non-specific symptoms in the early stage and no effective screening techniques, the majority of GBC patients are diagnosed at advanced stages, resulting in a poor prognosis [12–13]. Thus, research on GBC early detection and improvement of current treatment strategies is urgent.

The long non-coding RNA with a length of > 200 nt gained substantial attention recently [14]. An increasing number of studies have shown that lncRNAs may play a fundamental role in a variety of biological cellular processes and multiple diseases, including cancer [15]. Numerous new lncRNA molecules have been proved to be involved in the tumorigenesis and progression of GBC. LncRNA-MALAT-1 was abnormally upregulated in GBC and played an oncogenic role in GBC cells [9]. Recently, HOXA-AS2, a long non-coding RNA located between the HOXA3 and HOXA4 genes in the HOXA cluster, has been characterized as an oncogene in various cancers, including acute promyelocytic leukemia and gastric cancer. Inhibition of HOXA-AS2 could suppress cell proliferation and induce cell apoptosis [11]. However, whether HOXA-AS2 is involved in the progression of HCC is ill-defined and the molecular mechanisms remain to be fully elucidated. In the present study, we found that HOXA-AS2 mRNA was overexpressed in GBC tumor tissues and HOXA-AS2 expression was associated with GBC progression. The analysis of tumor cell proliferation and invasion abilities in lncRNA HOXA-AS2-knockdowned cells showed the inhibitory role of lncRNA HOXA-AS2 in GBC, which is similar to its role in promyelocytic leukemia and gastric cancer. We further identified that expression of EMT related markers were significantly altered following HOXA-AS2 knockdown. Thus, our data suggests that overexpression of HOXA-AS2 might promote ovarian cancer progression by regulating EMT.

The invasion and metastasis of cancer cells are landmark events that involve many changes in cellular behavior, and lead to different steps of the metastatic cascade [16]. Although HOXA-AS2 can suppress migratory and invasive phenotype of various cancer cells, the underlying mechanism is still elusive. Our results showed that inhibition of HOXA-AS2 impairs cell invasion and metastasis through the regulation of EMT process. EMT is a biological process where epithelial cells lose their polarity and undergo transition into a mesenchymal phenotype. To investigate the affect of lncRNA HOXA-AS2 on the epithelial-mesenchymal transition of GBC cells, the study examined the mesenchymal markers and epithelial markers in GBC cells with or without lncRNA HOXA-AS2 overexpression. It showed that E-cadherin (epithelial marker) was downregulated while Vimentin and N-cadherin (mesenchymal markers) were upregulated in lncRNA HOXA-AS2 overexpressed cells, indicating that effects of HOXA-AS2 on cell migration and invasion were partly associated with EMT process.

In conclusion, our study showed that HOXA-AS2 expression level was obviously elevated in GBC tissues and cells lines and corrected with the malignant status in GBC patients. Furthermore, knocking down HOXA-AS2 expression significantly inhibited GBC migration and invasion in vitro and regulated EMT-associated proteins expression.

Sixty-eight paired GBC tissue samples and neighboring noncancerous gallbladder tissues were obtained from patients who underwent surgery at Department of Hepatobiliary Surgery, Zhujiang Hospital, Southern Medical University between 2008 and 2015. All patients were staged according to the tumor node metastasis (TNM) staging system (the 7th edition) of the American Joint Committee on Cancer (AJCC) staging system. These tissue specimens were snap-frozen in liquid nitrogen and stored at –80°C until use. This study was approved by institutional review board, and informed consent papers were obtained from all of the patients.

Total RNA was extracted from tissues or cultured cells using TRIZOL reagent (Invitrogen). For qRT-PCR, RNA was reverse transcribed to cDNA by using a Reverse Transcription Kit (Takara, Dalian, China). Real-time PCR analyses were performed with SYBR Premix Ex Taq (Takara, Dalian China). Results were normalized to the expression of GAPDH. The sequence of the primers were as following: HOXA-AS2 (Forward: 5′-CCCGTAGGAAGAACCGATGA-3′, Reverse: 5′-TTTAGGCCTTCGCAGACAGC-3′) and GAPDH (Forward: 5′-GGGAGCCAAAAGGGTCAT-3′, Reverse: 5′-GAGTCCTTCCACGATACCAA-3′). The qRT-PCR assays were conducted on an ABI 7500, and data collected with this instrument. Our qRT-PCR results were analyzed and expressed relative to threshold cycle (CT) values, and then converted to fold changes.

The small interfering RNA-HOXA-AS2 (si-HOXA-AS2) or pcDNA- HOXA-AS2 were transfected into cells using Lipofectamine® 2000 Reagent (Thermo Fisher Scientific, USA) in a 6-well cell culture plate following to the manufacturer’s instructions. Plasmid vectors (sh-HOXA-AS2 and empty vector) for transfection were extracted by DNA Midiprep kit (Qiagen, Hilden, Germany). The full-length complementary DNA of HOXA-AS2 was synthesized by Realgene (Nanjing, China) and subcloned into the pcDNA3.1 (+) vector (Invitrogen) according to the manufacturer’s instructions. At 48 h post-transfection, cells were harvested for qRT-PCR or western blot analysis.

The cell proliferation was measured using the WST-8 kit (YiSheng, ShangHai, China). The transfected cells were plated into 96-well plates (Corning Costar, Corning, NY) at a density of 1.0 × 103/well/100 μL, and then 10 μL of CCK8 solution was added to each well, followed by incubation for 2 h. The cell viability was determined by measuring the absorbance at 450 nm. Measurement of cell proliferation was done once every.

Cell transfection was performed 48 h later as above mentioned. The transfected cells were harvested after trypsinization, counted and plated at a density of 500 cells/6-cm dish. The medium was refreshed once every 3 days. Ten days later, cells were washed in 1 × PBS twice, fixed in 3.7% methanol, stained with 0.1% crystal violet and then counted. The cell colony was counted (each colony contains at least 50 cells).

Transwell chamber was used to measure cell migration and invasion abilities. In brief, culture inserts with 8-mm pore size (Transwell; Corning, NY) were placed into 24-well plates. Before the measurement of invasion ability, the plates were pre-coated with matrigel. 2 h before the addition of matrigel, 500 μL of serum-free medium was independently added to the upper and lower chambers, followed by incubation at 37°C for hydration. Cells were digested by typsin, and resuspended in serum-free medium. The cell density was adjusted to 1 × 105/mL. Then, 200 μL of cell suspension was added into the upper chamber, and 500 μL of DMEM containing 10% FBS into the lower chamber. After incubation at 37°C with 5% CO2 for 24 h, the Transwell chamber was removed, cells were washed with 1 × PBS, fixed in paraformaldehyde for 20 min, and then stained with 0.1% crystal violet for 20 min. The cotton swab was used to clean the non-migrated cells in the upper chamber, cells migrating through the membrane were counted in 5 randomly selected fields under a microscope (Nikon) at a magnification of ×100.

The indicated cells were washed twice with precold phosphate-buffered saline quickly and suspended in extraction buffer. Proteins were quantied by Bradford method. Then, 50mg of total protein extracts was fractionated by 10% sodium dodecyl sulfate-polyacrylamide gel electrophoresis and transferred to polyvinylidene diuoride membranes (GE Healthcare, Piscataway, NJ, USA). The membranes were blocked with 5% milk at room temperature for 2 h. The primary antibodies including anti E-cadherin, anti-N-cadherin, anti-Vimentin (Santa Cruz Bio-technology, Santa Cruz, CA, USA), and anti-β-actin antibody (Cell Signaling Technology) were added and incubated with blots at 4°C for 12 h. Membranes were then washed three times with TBST and incubated with the corresponding secondary antibodies conjugated to horseradish peroxidase for 1 h at room temperature. Membranes were then washed again three times for 10 min each with TBS-T. Target protein bands were visualized using the enhanced chemiluminescence method. The intensity of the bands was quantified using the Tanon GIS syatem (Tanon, Shanghai, China) and the data were normalized to β-actin loading controls. All western immunoblot analyses were performed three times.