Experimental Design and Results: In our study, 75 tumor tissues from patients diagnosed with mucosal melanoma were analyzed, applying a targeted next generation sequencing panel covering 29 known recurrently mutated genes in melanoma. NF1 and RAS mutations were identified as the most frequently mutated genes occurring in 18.3% and 16.9% of samples, respectively. Mutations in BRAF were identified in 8.4% and KIT in 7.0% of tumor samples.

Conclusions: Our study identifies NF1 as the most frequently occurring driver mutation in mucosal melanoma. RAS alterations, consisting of NRAS and KRAS mutations, were the second most frequent mutation type. BRAF and KIT mutations were rare with frequencies below 10% each. Our data indicate that in mucosal melanomas RAS/NF1 alterations are frequent, implying a significant pathogenetic role for MAPK and potentially PI3K pathway activation in these tumors. 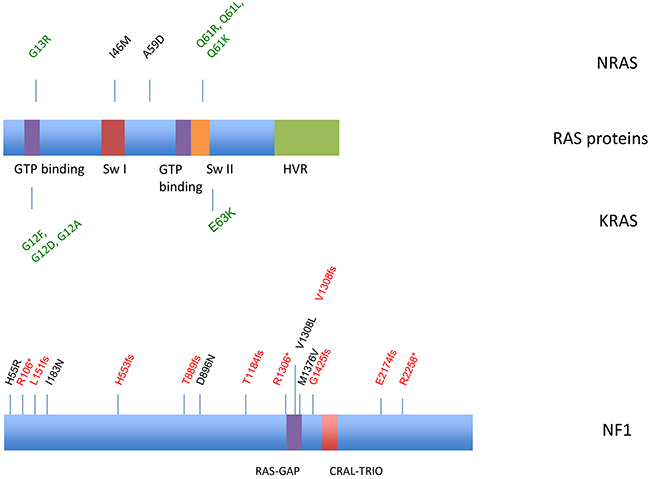 We performed a statistical analysis to assess possible associations of clinical parameters such as gender, location of the primary tumor and sample type (primary, metastasis or recurrence) with the NF1, RAS and RAF mutational status. A statistically significant association was determined between RAS mutational status and male sex (p=0.024, Table 1).

In this study, 71 mucosal melanoma samples were screened for mutations in known recurrently mutated genes in cutaneous and uveal melanoma. The most frequent mutations were identified in the NF1 gene and RAS gene family members, indicating that mucosal melanomas have a genetic mutation profile which is different from that of cutaneous or uveal melanomas. Our study identified an unexpectedly high number of NF1 mutations. In 13 (18.3,%) out of 71 samples, NF1 mutations were identified. Nine of those (69.2%) harbored clearly inactivating mutations, i.e. nonsense or frameshift mutations.

To our knowledge, there is no previous data demonstrating that mucosal melanomas express such a high frequency of NF1 mutations. Yang et al. recently conducted a targeted sequencing analysis on 15 anorectal melanomas and identified that 3 of these tumors harbored an NF1 mutation [22]. In recent years, NF1 has been recognized as the third most commonly mutated gene (after BRAF and RAS) resulting in activation of the MAPK pathway with a reported mutation frequency of 14% [18]. In cutaneous melanomas, more than half of the mutations reported are loss-of-function (LoF) events. In the mucosal melanomas studied here, 9 out of 13 cases carried NF1 LoF mutations (69.2%). It is known that NF1 is a GTPase-activating protein which downregulates the activity of the RAS protein [18]. As such, LoF mutations in NF1 are an important genetic mechanism for constitutive MAPK pathway activation.

Twelve out of 71 (16.9%) mucosal melanomas analyzed harbored RAS mutations, 8 in the NRAS and 4 in the KRAS gene. No mutations were identified in HRAS. Previous studies have focused primarily on NRAS, where the mutation frequency ranges from 5% to 15% [6, 8, 25-27]. The frequency of NRAS mutations detected in our study with 11.2% is comparable. KRAS mutations have not been assessed in most previous studies of mucosal melanoma, however, accounted for one third of the mutations in RAS genes observed in our cohort. A slightly significant association of RAS mutation status with male gender was noted (p=0.024). This potential association will need be to assessed in future studies with considerably larger sample numbers.

BRAF was the third most frequently mutated gene identified in our study. Of the 6 mutations (8.4%) identified, 5 were well known V600 activating mutations, consisting of 4 V600E and 1 V600K mutation. The other identified mutation, resulting in an N188S exchange, is of unclear significance and could be a non-relevant passenger mutation. These findings are in accordance with reports stating that activating BRAF mutations in mucosal melanomas are rare with a frequency between 5 and 17% [8, 9, 26, 28, 29]. Only one patient in our cohort received BRAF inhibitor therapy showing a partial response (Supplementary Table 2). The efficacy of BRAF inhibitor therapies in mucosal melanomas will need to be further assessed in larger studies.

TERT promoter mutations resulting in increased transcription of the TERT gene have been identified as the most common mutation in cutaneous melanoma [32-34]. In congruence with previous studies reporting low mutation rates in mucosal melanomas [35, 36], the mutation frequency in our cohort was 5.6%. All TERT mutations were C>T mutations. As C>T alterations are classically associated with UV-exposure [32, 37, 38], the lower TERT mutation frequency may be due to the very limited UV-exposure of tumors arising in mucosal locations.

Two alterations were identified in GNAQ and GNA11, mutations that are usually associated with uveal melanomas and blue nevi [19]. Of those, only the GNAQ R183Q mutation is known to be functionally activating, resulting in increased mitogenic signaling in melanocytic tumors and rare vascular diseases such as Sturge-Weber syndrome and phakomatosis pigmentovascularis [39, 40]. The other mutation identified (GNA11 S267F) is not known to be functionally relevant and probably represents a bystander mutation considering the sample also harbored a NRAS Q61K hot-spot mutation. While GNAQ and GNA11 mutations were recently reported to occur in 9.5% of mucosal melanomas [20], our study suggests these mutations are less frequent in this tumor entity.

In out cohort, 31 samples presented mutations in the MAPK pathway (some of them harboring more than one mutation): 13 NF1, 12 RAS, 6 RAF, 5 KIT, 1 GNAQ and 1 GNA11 mutation. In 23 of those samples mutations resulting in MAPK activation were found suggesting that this is a critical event in the pathogenesis of mucosal melanoma. This is similar to cutaneous melanoma, where constitutive activation of the MAPK pathway is a known critical event. The genetic alterations leading to this activation however vary between these melanoma subtypes [18].

Although our study represents the most comprehensive genetic analysis of 75 mucosal melanomas presented to date, it does have some limitations. Mutations occurring in genes not covered by our panel could not be identified. Additionally, our approach did not allow us to reliably detect copy number variations.

Samples of mucosal melanomas were retrieved from the biobank of the Department of Dermatology, Essen, Germany, from the TRIM (Tissue Registry in Melanoma) project of the German DeCOG (Dermatological Cooperative Oncology Group) as well as from patients enrolled into the DeCOG trial ChemoSensMM [ClinicalTrials.gov: NCT00779714 [41]. Samples were considered mucosal melanoma if the tumor originated in a mucosal site, was diagnosed as melanoma histopathologically (confirmed by at least one immunohistochemical marker [Melan-A, HMB-45 or S100]) and no other preexisting, e.g. cutaneous, melanoma was reported (to exclude potential mucosal metastasis). The study was performed with informed patient consent in accordance with the guidelines of the Ethics Committee of the Medical Faculty of the University Duisburg-Essen (ethical approval no. 15-6473-BO, no. 15-6566-BO).

FFPE tissue was prepared in 10 μm sections and deparaffinized according to standard procedures. In brief, 2 steps of 5 min xylene, 5 min 100% ethanol, 5 min 95% ethanol, 5 in 70% ethanol, 5 min 50% ethanol, rinsing in water. After air drying, the tumor tissue was manually macrodissected from the sections. The tumor content in the area of macrodissection was required to be at least 25%, however, was generally considerably higher (documented values are listed in Supplementary Table 1). Genomic DNA was isolated applying the QIAamp DNA Mini Kit (Qiagen, Hilden, Germany) according to the manufacturer’s instructions.

A custom designed amplicon-based sequencing panel covering the TERT promoter and the complete coding regions of 29 known recurrently mutated genes in cutaneous and uveal melanoma (Supplementary Table 3) was applied. This panel was initially clinically validated over a period of 3 months, where Sanger and NGS panel sequencing were performed in parallel for all samples analyzed. All known recurrent mutations in melanoma (incl. BRAF V600, NRAS G12, G13 and Q61 and KIT L576, K642 and N822) were repeatedly picked up by our NGS panel which showed a 100% concordance with mutations identified by Sanger sequencing, however demonstrated a higher level of sensitivity. After successful validation, our routine clinical sequencing effort has solely relied on the NGS panel, which in over 2 years has been applied to more than 1300 melanocytic tumors. Our panel sequencing approach is not able to reliably detect copy number variations.

The associations of mutation status with clinical parameters such as gender, location of the primary tumor and sample origin (primary, metastasis or recurrence), was investigated using chi-squared tests and Fisher exact tests as appropriate. Statistical analyses were performed using SPSS 23.0 (IBM Corp., Armonk NY, USA), considering a p-value of p≤0.05 as statistically significant.

All other authors have nothing to declare.

1. Chang AE, Karnell LH, Menck HR, and The American College of Surgeons Commission on Cancer and the American Cancer Society. The National Cancer Data Base report on cutaneous and noncutaneous melanoma: a summary of 84,836 cases from the past decade. Cancer. 1998; 83:1664–78.