Results: 123 patients were analyzed (97 LR, 26 PR). In the LR cohort, overall response rate was 79% and median duration of best response was 30 months. Median PFS and overall survival were 43.2 (95% confidence intervals[CI]:37.2-49.3) and 63.5 months (95%CI:55.1-71.9), respectively. At baseline PR patients had a significantly lower proportion of nephrectomies, higher lactate dehydrogenase and platelets levels, lower hemoglobin, shorter time to and higher presence of metastases, and increased Fuhrman grade. Higher levels of HEYL, HEY and HES1 were observed in LR, although only HEYL discriminated populations significantly (AUC[ROC]=0.704; cut-off=34.85). Increased levels of hsa-miR-27b, hsa-miR-23b and hsa-miR-628-5p were also associated with prolonged survival. No statistical significant associations between hsa-miR-23b or hsa-miR-27b and the expression of c-Met were found.

Over the past years multiple molecularly targeted agents for the treatment of advanced renal cell carcinoma (RCC) have been developed, greatly improving clinical benefit to patients [1].

Similar to other conventional and molecular-targeted antitumor agents, there is an interindividual variability in response to sunitinib treatment. Potential serum-, radiological-, clinical- and tissue-based predictive biomarkers have been investigated across multiple agents [3–5], obtaining promising results. Additionally, certain adverse events (AEs) (i.e. Hypertension, Hypothyroidism) induced by sunitinib in mRCC patients may be associated with an improvement in clinical outcomes [6, 7].

Inherited genetic variability may be one of several contributing tumor- and host-related factors underlying individual treatment response. Specific signaling pathways such as Notch [8], Hedgehog [9] and Wingless (Wnt)-β-catenin [10] are critical for embryonic development, and for self-renewal and differentiation in adult stem cells, being also involved in tumor development and maintenance [11]. Remarkably, they are also involved in normal and pathological angiogenesis and, thus, have been considered as indicators of response to specific antiangiogenic therapies.

The microRNAs (miRNAs) are key regulators of oncogenic processes [12], representing a promising novel group of biomarkers. They are essential modulators of the above commented developmental signaling pathways, and are also involved in cancer stem cell maintenance [13].

The efficacy and safety of sunitinib in a subset of long-term responders has been previously described in retrospective pooled cohorts [14–16], although a comparison of extreme responders and non-responders is unpublished.

In the present analysis, we compared the baseline clinical characteristics and the levels of expression of various genes and miRNAs involved in Notch, Hedgehog, Wnt, hypoxia, epithelial mesenchymal transition and stem cell maintenance signaling in two extreme groups of patients: those with the highest benefit (long-term responders, LR) and those resistant to sunitinib (primary refractory, PR). We also explored the occurrence of several AEs as potential biomarkers of sunitinib efficacy.

Baseline clinical characteristics that were significantly different between PR and LR patients are depicted in Table 1. In the overall population, 94% of patients had clear-cell histology with 7 patients having mixed histology (clear-cells plus sarcomatoid/papilar). Fourteen patients (11%) received sunitinib after cytokines and 109 patients (89%) in first-line, with no significant differences between groups.

Heng prognostic criteria were not significantly correlated with response in our population (P=0.109). However, most of the components individually, except for calcium and neutrophil levels, showed significant differences between both cohorts, and 61% of PR patients presented ≥2 Heng risk factors compared to 24% in LR group.

Fifty-two primary clear-cell primary tumor samples corresponding to 39 LR (75%) and 13 PR patients (25%) were analyzed. Among the different genes analyzed, only HES1, HEY and HEYL, putative effectors of Notch signaling, showed increased expression in the LR group compared to PR group (Figure 1A, 1B, and 1C, respectively; Figure 2). A significant positive internal correlation between the expression of these 3 genes was also observed (Figure 1D, and data not shown). 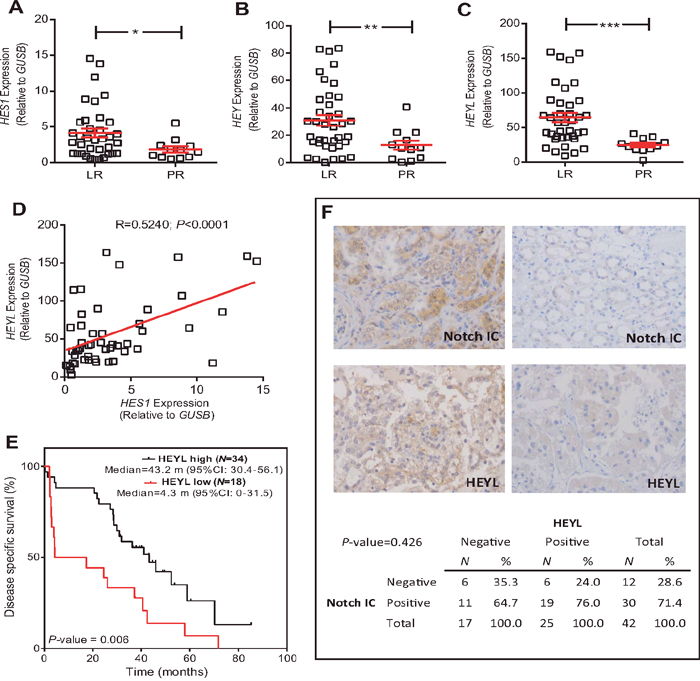 After the ROC analyses, only HEYL levels discriminated the studied populations with significant sensitivity and specificity (AUC=0.704). These analyses also provided a possible cut-off value of 34.85 (reference: GUSB). Of note, when the patients were classified according to their HEYL levels using this cut-off, an increased disease-specific survival in the high expression group was observed (Figure 1E).

Since HEYL is considered an effector of Notch signaling, we monitored whether LR and PR tumors displayed activated Notch. The expression of intracellular Notch domain (Notch-IC) and HEYL was determined in a TMA containing the previously analyzed samples. The samples were classified as negative or positive given their relatively small number (representative examples provided in Figure 1F). No statistically significant relationship between Notch-IC and HEYL positive staining was found (P=0.426) (Figure 1F). 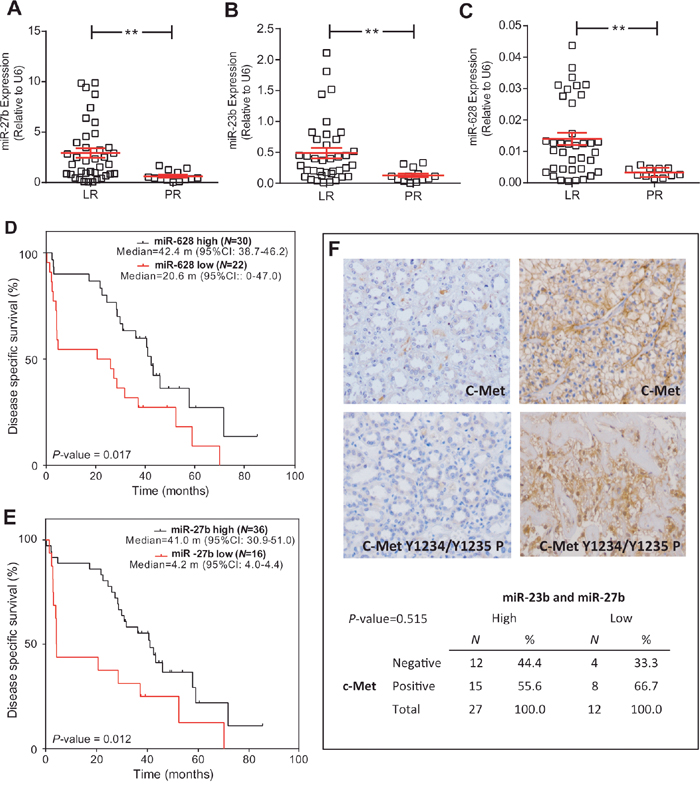 No validated targets have been yet identified for hsa-miR-628-5p. Both hsa-miR-27b and hsa-miR-23b inhibit the expression of c-Met and Notch1. A tendency of decreased c-Met activation in the LR group was observed, although statistical significance was not reached. Moreover, we did not find any association between increased levels of hsa-miR-23b or hsa-miR-27b, or the reduced levels of both, and the expression of c-Met (Figure 3F).

Correlation between PFS and toxicity in LR group

Ninety-four percent of LR patients presented at least one AE during the study, being the most common (all grades): asthenia (83%), mucositis (75%) and hand-foot syndrome (64%), followed by hypertension, hypothyroidism, neutropenia and thrombocytopenia (57%, 46%, 43% and 42%, respectively). A marked tendency towards prolonged PFS was observed in patients with hypertension or hypothyroidism, but did not reach statistical significance (Figure 5). 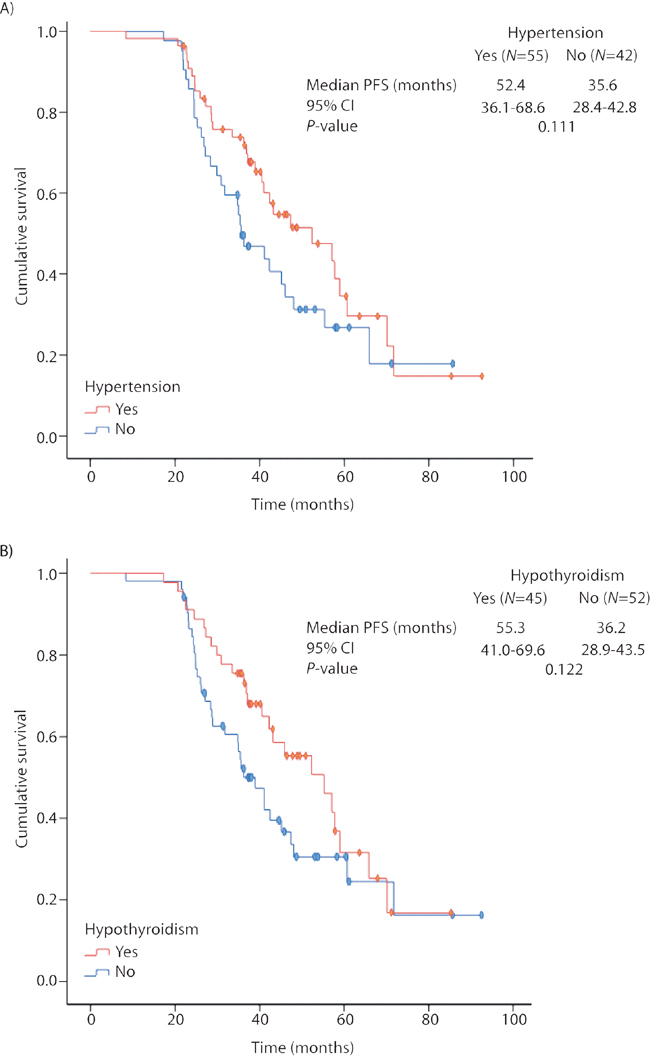 The results of this molecular study suggest that there is a potential correlation between Notch activation and long-term response in mRCC patients treated with sunitinib. This correlation has been previously reported [17] and is aligned with the widely reported role of this pathway in angiogenesis [18, 19]. Our data also support that other relevant signaling pathways, such as Hedgehog and hypoxia, are not major players in sunitinib response in mRCC.

According to our analyses, only HEYL expression could be potentially used a biomarker of sunitinib response. Increased HEYL expression has been associated with neovascularization in breast cancer [20]. Nonetheless, other potential Notch signaling effectors, such as HES1 and HEY, did not reach the statistical significance as unique biomarkers. Moreover, JAG1 levels did not discriminated studied populations, and Notch IC was not associated with increased HEYL levels. In our opinion, the low number of available tumor samples and the high intratumor heterogeneity in mCRR [21] may be limiting these results. Notch signaling is a complex process involving multiple cell compartments and proteins, and its possible role in sunitinib response requires further investigation in a larger cohort.

Various miRNAs can regulate hypoxia and angiogenesis [22], suggesting a potential role in patient’s response to antiangiogenic drugs. For instance, hsa-miR-221/222, hsa-miR-141, hsa-miR-942, hsa-miR-133a and hsa-miR-484 have been previously suggested as candidates for poor response to sunitinib [23–26]. However, there are important discrepancies among these studies, which are also limited by the small number of patients included and their specific clinical and therapeutic response characteristics. The results herein presented, comparing extreme groups of responders to sunitinib, do not support the potential significance of these pre-specified miRNAs. Here we provide evidence that changes in hsa-miR-628-5p are distinctive of LR and PR populations of sunitinib-treated mRCC patients. This miRNA was previously identified by Prior et al [25]. Nonetheless, the absence of bona fide characterized targets of hsa-miR-628-5p precludes ulterior functional analysis.

To the best of our knowledge, this is the first report showing an association between increased levels of hsa-miR-23b and hsa-miR-27b and prolonged response to sunitinib in patients with mRCC. However, their roles in other cancer types and in chemoresistance have been previously reported [27, 28]. The joint inhibition of the expression of Notch1 and c-Met by hsa-miR-23b and hsa-miR-27b reinforces our above commented hypothesis regarding the potential involvement of Notch signaling in sunitinib response, and warrants future research on this pathway. Furthermore, MET expression has been associated with resistance to sunitinib and with more aggressive tumor behavior in renal cancer, becoming an attractive target for the treatment of sunitinib-resistant mRCC patients [29]. However, we did not find a significant association between increased levels of hsa-miR-23b or hsa-miR-27b or the reduced levels of either miRNAs with the expression or activity of MET in renal cancer samples. Further studies are needed to elucidate the possible targets of these two miRNAs regarding sunitinib response in mRCC patients.

Additionally, despite the strong tendency observed, we did not found a significantly prolonged PFS in our cohort of LR patients presenting sunitinib-related AEs, contrary to previous studies [6, 7], probably due to their extremely prolonged survival time.

We observed a significantly higher number of Heng risk factors [30] in PR patients, although risk categories did not differ between groups, probably related with the low number of patients included in PR group. Additionally, we found a significantly lower proportion of nephrectomies, higher lactate dehydrogenase levels, shorter time to metastatic disease, higher presence of lung, brain and hepatic metastasis, and increased Fuhrman grade among PR patients. Some of these factors have been previously identified as predictive of a shorter PFS [14, 16], while others may have arose given the extreme differences of the studied populations. The validation of its prognostic value in a large independent cohort is warranted.

In conclusion, our data present important molecular implications regarding the response to sunitinib in mRCC patients. However, given the lack of identified molecular targets and current limitations of immunohistochemistry techniques, we were unable to identify which pathways are conditioning sunitinib response. The identification of these pathways and the confirmation of HEYL, hsa-miR-27b, hsa-miR-23b and hsa-miR-628-5p as predictive biomarkers will allow clinicians to offer an accurate and personalized treatment for both newly diagnosed and non-responder patients in daily clinical practice.

Retrospective, observational, multicenter study of two extreme groups of patients (LR and PR) treated with sunitinib under clinical practice. The study was conducted between January 2012 and January 2014 in 16 centers participating in the Spanish Oncology Geniturinary Group (SOGUG). The objectives were to identify baseline clinical factors associated with long-term clinical benefit to sunitinib treatment and to correlate tumor expression of different signaling pathways components and the occurrence of treatment-related AEs with treatment associated survival.

This study was carried out in accordance with the declaration of Helsinki and approved by the Spanish Authorities and Ethics Committees of each participating hospital. All patients gave written informed consent.

Immunohistochemistry and genetic analyses were carried out in available archived formalin-fixed paraffin embedded (FFPE) clear-cell primary tumor samples. Hematoxylin and eosin stained sections of the tumor samples were examined by a pathologist to confirm the diagnosis and estimated tumor content. These analyses were performed at the Molecular Laboratory of Hospital 12 de Octubre (Madrid, Spain).

Protein, mRNA and miRNA expression (positive vs negative) were correlated with treatment outcome according to the cohorts of LR and PR. Survival probabilities were assessed by the Kaplan-Meier method. Cox proportional hazard models were used to identify predictors of treatment outcomes. To determine their ability to discriminate the two populations we sequentially performed unpaired tTest, ROC analyses and Kaplan-Meyer distributions with LogRank test. For all statistical tests, an a priori significant level of α=0.05 was assumed.

The authors gratefully thank all contributing investigators and research teams of SOGUG group. We also thank Marina Morán and M. Victoria Bolós from Pfizer for their valuable contribution in all the steps of the study. The authors also appreciate the collaboration of the participating patients and their families. Medical Writing: TFS: Juan Martín; Financial Support: Pfizer S.L.U.