The last influenza pandemic, caused by the swine A(H1N1)pdm09 influenza virus, began in North America at 2009. Since then, the World Health Organization (WHO) recommended integration of the swine-based virus A/California/07/2009 strain in yearly vaccinations. Yet, infections with A(H1N1)pdm09 have continued in subsequent years. The reasons for this are currently unknown. During the 2015–2016 influenza season, we noted an increased prevalence of A(H1N1)pdm09 influenza virus infection in Israel. Our phylogenetic analysis indicated that the circulating A(H1N1)pdm09 strains belonged to 6B.1 and 6B.2 clades and differed from the vaccinating strain, with approximately 18 amino acid differences found between the circulating strains and the immunizing A/California/07/2009 strain. Hemmaglutination inhibition (HI) assays demonstrated higher antibodies titer against the A/California/07/2009 vaccinating strain as compared to the circulating Israeli strains. We thus suggest that the current vaccination was not sufficiently effective and propose inclusion of the current circulating A(H1N1)pdm09 influenza viruses in the annual vaccine composition.

Influenza viruses are responsible for many respiratory infections affecting all age groups, particularly the elderly population [1, 2]. Annual epidemics of seasonal influenza viruses are estimated to result in approximately three to five million cases of severe illness and about 250,000 to 500,000 deaths worldwide (WHO, 2014). In addition, influenza pandemics, that occur every few decades, pose a major global threat.

Influenza virus genome contains 8 single-stranded RNA molecules, which encodes at least 13 proteins, among them Neuraminidase (NA) and Hemagglutinin (HA), which are expressed on the surface of infected cells [3–5]. To avoid immune recognition, both the HA and the NA proteins are subjected to extensive antigenic changes, complicating the design of a universal vaccine aiming to target all influenza strains [6]. Thus, the primary preventive strategy currently available against influenza virus infection is a vaccine that is designed and administered each year [7]. The vaccine is composed of three or four influenza virus strains prevailing in the influenza season of the opposite hemisphere.

The most recent influenza pandemic occurred in 2009. Although the mortality rate was relatively low, it affected many people around the world [8]. The pandemic began in La Gloria, Mexico in February 2009 [9]. Since that time, the A(H1N1)pdm09 virus spread rapidly across the globe and early assessments of transmissibility and severity were made [9]. In 2010, the WHO announced that A(H1N1)pdm09 virus is expected to continue circulating as a seasonal virus [10]. Indeed, infections with the virus were noted in subsequent years, accounting for 24.5% of the 2010–2014 infections in North China, 16% of which were in 2013–2014 [11]. In 2012–2013, 28.5% of the influenza-infected individuals in France, Italy, Spain and Lithuania together, were infected with influenza A(H1N1)pdm09 [12]. In Austria, 18.3% of the influenza-infected individuals were A(H1N1)pdm09-positive in winter 2014–2015 [13]. During the post-pandemic period in Israel, 10% of the patients hospitalized in 2010–2011 winter season and 5% of those hospitalized in the 2011–2012 winter season, were infected with the A(H1N1)pdm09 virus [6]. These numbers rose in winter 2012–2013, when 20% of the hospitalized patients were infected with the A(H1N1)pdm09 influenza virus, 64.8% of whom were pregnant women [6]. A recent Eurosurveillance report estimated that the northern hemisphere vaccine still offers protection against circulating A(H1N1)pdm09 viruses, because only limited drift has been observed [14].

Here, we report of a significant A(H1N1)pdm09 Influenza virus infection rate in the last winter season (2015–2016) in Israel, analyze the virus properties and demonstrate that it differs from the strain included in the vaccine. 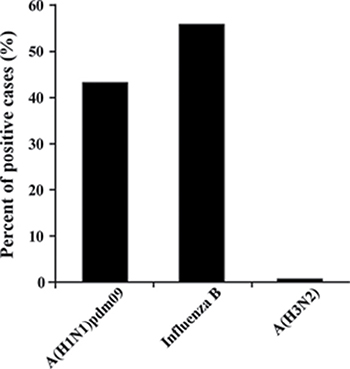 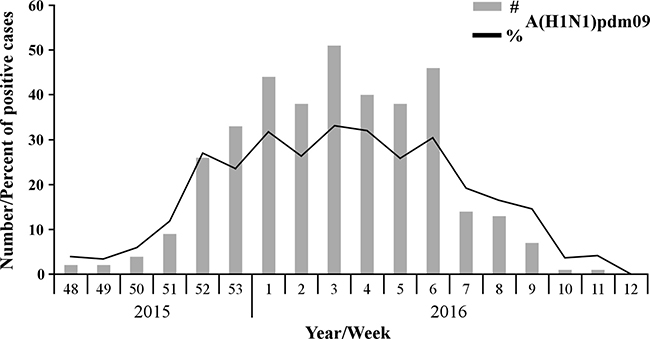 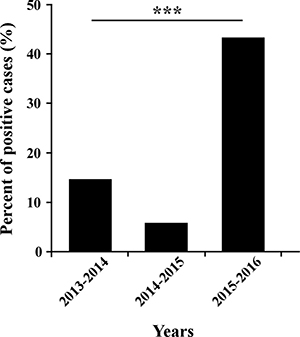 Several A(H1N1)pdm09 viruses were randomly selected from 2015–2016 winter period samples and from samples collected during previous winter seasons, to enable a whole HA gene sequencing (1701 bp, 566 amino acid) and construction of a phylogenetic tree. Some of those viruses were isolated from individuals vaccinated against the California/07/2009 strain. We aligned 1035 base pairs of all the sequences in the phylogenetic tree. The resulting cladogram indicated that while the vaccinating strain A/California/07/2009 belongs to clade 1, the circulating Israeli strains belonged to clade 6B, represented by A/South-Africa/3623/2013 (Figure 4). The Israeli strains belong either to clade 6B.1 or 6B.2, represented by A/Slovenia/2903/2015 or A/Ukraine/6909/2015 strains, respectively (Figure 4). 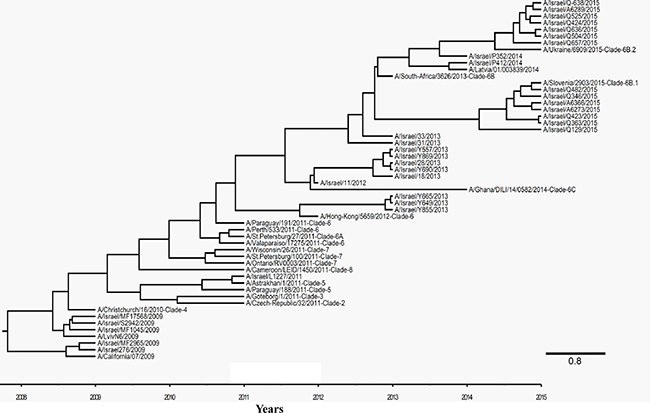 Figure 4: Phylogenetic tree of A(H1N1)pdm09 viruses. Bayesian maximum-clade-credibility time-scaled phylogenetic tree (BEAST), generated using 54 A(H1N1)pdm09 Influenza HA gene, obtained from reference genes and patient samples collected between 2009 and 2016 in Israel. Alignment was observed for 1035 base pairs of all the genes in the phylogenetic tree. Clade number is indicated next to the reference viruses. Scale bar display time in years. 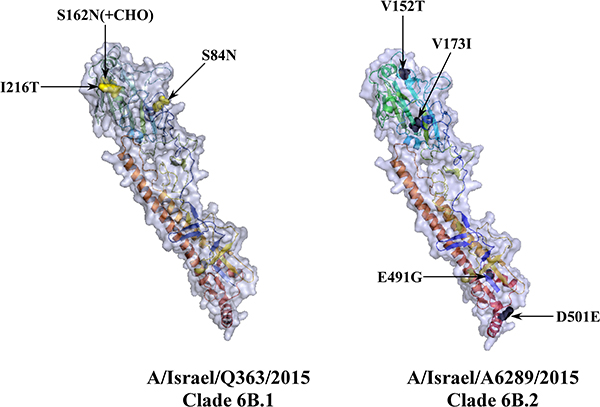 Figure 5: Three dimensional presentation of HA protein of circulating 6B clade Israeli viruses. HA gene sequences of A/Israel/Q363/2015 (clade 6B.1) and A/Israel/A6289/2015 (clade B.2) translated using ExPASy translate tool and their 3D structure predicted using SWISS-MODLE server. The tertiary structure designed in PyMOL. Mutations which define 6B.1 (yellow) or 6B.2 clade (black) are marked in arrow.

Analysis of the symptoms reported by patients infected with A(H1N1)pdm09 virus in 2009 and 2012 versus 2015th circulating 6B clade strains, yielded no significant differences between the patient groups (Figure 6). In addition, to evaluate the potential of serum antibodies collected from individuals to cross-react with the influenza A(H1N1)pdm09 circulating strains, sera from 240 individuals obtained in 2014–2015, prior to the appearance of the current strains. Sera samples were applied in HI assays against the vaccine strain A/California/07/2009 antigen and against two circulating influenza A(H1N1)pdm09 antigens from clade 6B.1 and 6B.2. As seen in Figure 7, the vaccine strain was better recognized (Figure 7A), and yielded a higher geometric mean of antibodies titer (GMT Figure 7B), as compared with the circulating Israel strains. 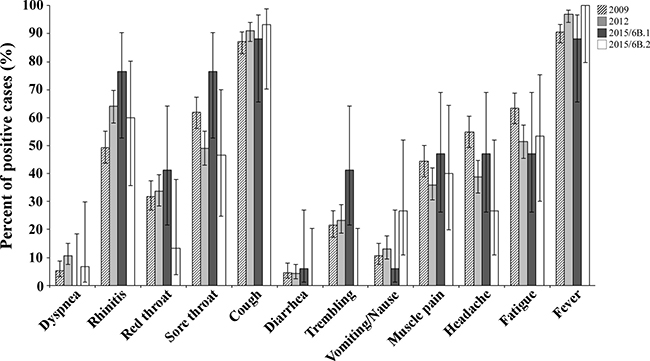 Figure 7: Antibodies against 6B clade antigens were not dominant in 2014. The presence of antibodies against A/California/07/2009, Israeli 6B.1 and 6B.2 antigens was detected using the HI test. The figure shows the distribution of the positive cases by antibody titer (A) and their geometric mean (B). *** indicates P < 0.0001 using the Kruskal-Wallis test.

The recent years gave us the opportunity to study the evolution and spread of the pandemic A(H1N1)pdm09 Influenza virus, since the time it first appeared in 2009 until today. At the post-pandemic period, until 2015, HA genes have evolved and eight genetic groups have been designated [6]. Since September 2015, most A(H1N1)pdm09 viruses fell into genetic group 6B and in two emerging subgroups, 6B.1 and 6B.2 [18]. Despite the emergence of new genetic subgroups, a report for the WHO suggested in February 2016 that these 6B clade viruses are antigenically similar to the vaccine virus A/California/7/2009 [18].

Laboratories in the United States and United Kingdom have recently reported maintained effectiveness of the influenza vaccine bearing the A/California/7/2009 strain [22, 23]. However, in contrast to these reports, which used post-infected ferret’s sera in their HI assays, we directly compared the HI potential of A/California/7/2009 versus Israeli 6B viruses isolated from patient samples, to identify cross-protecting antibodies in the Israeli population. This analysis significantly demonstrate that the anti-influenza antibodies recognize the circulating Israeli 6B strains 4-fold less efficiently as compared to the vaccinating strain. In line with these findings, the WHO report including recommendations for the northern hemisphere 2015–2016 vaccine composition, states that the GMTs in HI against representative 6B clade viruses were significantly reduced compared to HI titers to the vaccine virus, particularly in pediatric serum panels [18].

As part of community influenza surveillance, conducted in collaboration with the Israel Center for Disease Control (ICDC), respiratory clinical samples (nose-throat swabs) were collected from 1917 patients presenting with Influenza-like illness (ILI), during the winter season spanning between October 2015 and April 2016.

Serum samples (N = 240) were obtained from the Israel National Serum Bank established by the Israel Center for Disease Control. The samples were collected from healthy individuals in 2014.

For the phylogenetic analysis, influenza Hemagglutinin gene-specific primers (WHO Swine genome set [27] were amplified using the OneStep RT-PCR Kit (QIAGEN). ExoProStar (Illustrsa) was activated on the cDNA to clean unincorporated primers and dNTPs. The Big Dye® Terminator v1.1 cycle kit (ABI Prism®) was used for sample sequencing, as per the manufacturer’s instructions. The BigDye® Xterminator Purification Kit (ABI) was then used to clean the cDNA. Samples were processed and sequenced in a Genetic Analyzer 3500 (ABI\HITACHI) machine.

For the phylogenetic analysis, Influenza Hemagglutinin gene-specific primers were used [6, 27]. The Sequencher® 5.0 program (Gencodes Corporation, Ann Arbor, MI) was used to compare the nucleotide sequences of the collected samples to HA genes of various Influenza A clades.

The evolutionary relationships and the most recent common ancestor (MRCA) for the influenza A(H1N1)pdm09 virus Hemagglutinin sequences, were calculated using a Bayesian Markov chain Monte Carlo (MCMC) method, applied using a relaxed molecular clock, as implemented in the BEAST program (version 1.7.5). Trees were visualized and edited with the Figure Tree program (version 1.4.2) included in the BEAST software package [28].

All sera were treated (16 h) with receptor destroying enzyme (RDE) (Sigma C8772), diluted 1:4, prior to heat inactivation (30 min, 56°C). Absorption with erythrocytes was then conducted to remove non-specific binding, in accordance with a WHO-recommended protocol [29]. Two-fold serial dilutions (1:40–1:5120) of sera in 25 μl PBS were prepared in V-shaped well plates, and an equal volume of four HA units was added. The mixture was then incubated at room temperature for 1 h. Fifty microliters of 0.5% chicken erythrocytes suspended in PBS, were added to the wells, and mixed by shaking the plates on a mechanical vibrator. Agglutination patterns were read after 30 min and the HI titer was defined as the reciprocal of the last dilution of serum that fully inhibited Hemagglutination. The cut-off value for a positive result was set at 1:40. The influenza A(H1N1)pdm09 (A/California/07/2009 NYMC X-179A) antigen was supplied by the WHO. The Israeli 6B.1 and 6B.2 clades antigens were A/Israel/Q363/2015 and A/Israel/Q504/2015, respectively.

The annual percent of positive cases was calculated by dividing the number of positive A(H1N1)pdm09 samples by the total number of positive tests for Influenza Viruses. The Chi-Square test was applied to evaluate the differences in positivity percent between the compared years. To calculate significant differences of HI results, we used Kruskal-Wallis test (One-way ANOVA on ranks), since the titers have non-normal distributions. All analyses were performed using SPSS. A p-value < 0.05 was considered to be statistically significant.

Community influenza surveillance, including nose-throat swabs, is performed under the Public Health Ordinance enacted in Israel and thus informed consent was not required. The IRB of the Sheba Medical Center approved the research (Helsinki Number 2873-15-SMC for molecular characterization and 1967-15-SMC for serologic studies).

This work was performed in partial fulfillment of the requirements for a Ph.D degree of Nehemya Friedman, Sackler Faculty of Medicine, Tel Aviv University, Israel.

10. WHO recommendations for the post-pandemic period. WHO: World Health Organization). 2009.

23. Flannery B, Chung J. Influenza Vaccine Effectiveness, Including LAIV vs IIV in Children and Adolescents. US Flu VE Network, 2015–16.