Conclusions: This study found that age, tumor size and calcifications density can be conveniently used to facilitate the preoperative prediction of LN metastasis. The luminal B subtype has the highest risk of LN metastasis among the microcalcification-associated breast cancers.

Breast cancer is one of the most frequent malignancies worldwide and represents an important public health problem [1, 2]. Evaluating the status of axillary lymph nodes (ALNs) is essential in deciding appropriate treatment and staging as well as predicting the long-term survival in breast cancer [3]. Although significant progress has been made in the genetic and molecular characterization of breast malignant lesions, axillary lymph node involvement is the single most important prognostic variable [4–7].

The spread of screening mammography has led to increasing occurrences of microcalcifications [14, 15]. Mammographically detected microcalcifications represent the earliest mammographic findings of non-palpable breast cancers, which are found in approximately 70% of minimal breast carcinomas [16, 17] To the best of our knowledge, no studies have determined whether a calcification features combined with clinicopathological parameters would enable superior prediction of LN metastasis in IDC of breast. Therefore, we investigated whether the clinicopathological parameters and imaging features of the patterns of mammographically detected calcifications differed between LN (+) tumors and LN (–) tumors. 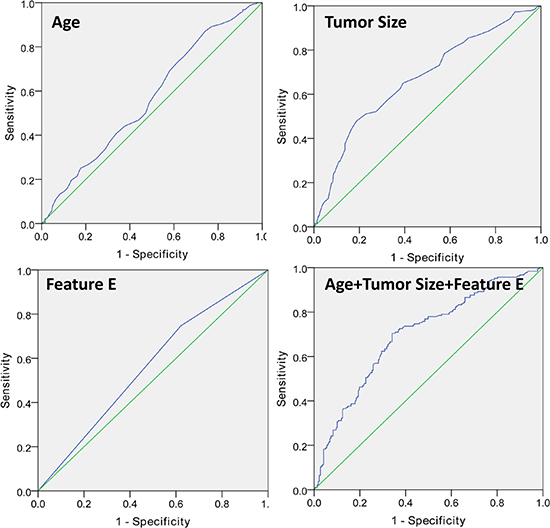 We demonstrated that larger tumor size, younger age and calcifications > 20/cm2 in density (Figure 3) were associated with a significantly higher incidence of LN metastasis (Tables 1–3). This model had an AUC of 0.701. 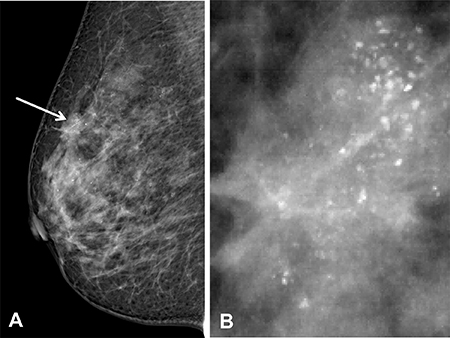 Table 1: Clinical and pathologic characteristics of 419 patients between LN(–) and LN(+) tumors

There were no significant differences in clinicopathological parameters or BI-RADS 3–5 microcalcifications between the LN (–) and LN (+) invasive ductal carcinoma (Luminal A, HER2, Basal molecular subtype).

Mammographically detected calcifications are frequently used as the only sign of breast cancer [18]. Mammography is the gold standard modality for detecting microcalcifications [19]. BI-RADS 3–5 microcalcifications are a characteristic appearance of breast cancer at mammographic imaging and a well-known criterion in the diagnosis of the disease. LN metastasis is one of the most important prognostic factors in IDC patients. Patients with LN metastasis have an approximately four- to eight-fold higher mortality rate than those without nodal involvement [20]. To the best of our knowledge, no studies have determined whether calcification features combined with clinicopathological parameters would enable the prediction of LN metastasis.

If it is possible to predict the LN metastasis based on the patterns of mammographically detected calcifications, this information will be essential for clinical decision-making [29]. The multivariate analysis in our study demonstrates that the clinicopathological and imaging parameters of infiltrating ductal carcinoma, which consisted of three selected features (age, tumor size and Feature E), were statistically significant independent predictors. We demonstrated that larger tumor size, younger age and calcifications > 20/ cm2 were associated with a significantly higher rate of LN metastasis. However, other studies did not perform other measurements such as calcification range, calcification diameter and calcification density to more comprehensively evaluate the appearance of these calcifications. Additionally, our study is the first study to identify the risk factors in IDC, including a relatively large number of breast cancer patients. The discrimination of the model for predicting LNM was 0.70 in this study was 0.70 (95%, C.I. 0.69–0.73), thereby confirming a high level of reliability.

A previous study reported that HER2 positivity is associated with a higher rate of LN metastases [23]; this was not confirmed by our study. However, little is known about the incidence of microcalcification-associated breast cancers [15]. Our study found that Luminal B tumors (Luminal B vs. others, Luminal B vs. Luminal A, Luminal B vs. basal) have the highest risk of LN metastasis. Future data from large studies will be of interest. Our multivariate analysis showed that calcification > 2 cm in range (OR: 1.878 95% CI: 1.150 to 3.067) and tumor size (OR: 1.882 95% CI: 1.327 to 2.670) were independently predictive of LN metastasis of the Luminal B molecular subtype. The discrimination of the present study’s model for predicting LNM was 0.67. And future data from large studies will be of interest.

Our study had limitations. First, we did not evaluate interobserver variability because this was a retrospective analysis and two radiologists reviewed the mammographic images in consensus. Secondly, we did not determine whether microcalcifications were combined with associated findings such as focal asymmetry, architectural distortion, or suspicious masses. Further study is needed to explore additional relationships. Thirdly, micrometastases were found in 22 (5.3%) of 419 patients. Due to the limitations of our raw data (micrometastases 5.3%), the clinicopathological parameters and BI-RADS 3–5 microcalcifications only predict positive lymph node status.

In conclusion, our findings clearly show that age, tumor size and Feature E (≤ 20 or > 20/cm2 in density) can be conveniently used to facilitate the preoperative individualized prediction of lymph node metastasis in patients with IDC. The discriminatory power for this prediction model was good with an overall AUC of 0.70. This information may be useful for clinical decision-making in breast cancer patients.

The ethics committee approved the study (Guangdong Provincial Traditional Chinese Medicine Hospital), and written informed consent was obtained from all breast cancer patients. Patients were included in this analysis if information on (1) invasive ductal carcinoma of breast (2) Breast Imaging Reporting and Data System (BI-RADS) 3–5 microcalcifications and (3) histopathologic information were available.

The digital mammograms acquired were analyzed using a standard four-view film. All cases of microcalcifications were classified according to the method proposed by the American College of Radiology, and only those classified as BI-RADS 3–5 were selected [16, 30, 31]. All of the parameters of the calcifications (Features A-E) were divided in a binary manner. We conducted a detailed image analysis to evaluate morphology (Feature A (1) Fine linear or branching or pleomorphic (2) amorphous or coarse heterogeneous), distribution (Feature B (1) grouped or clustered or regional (2) linear or segmental), range (Feature C (1) calcifications measuring ≤ 2 cm or (2) > 2 cm in range), diameter (Feature D (1) ≤ 0.5 mm or (2) > 0.5 mm in diameter) and density (Feature E (1) ≤ 20 or (2) > 20/cm2 in density).

Tumors were divided into 4 molecular subtypes according to previous reports [32–34]: (1) the Luminal A subtype, (2) the Luminal B subtype, (3) the HER-2 enriched subtype, and (4) the Basal subtype.

HER2-positive status (IHC 3+ or Fish+ and IHC 0/1+ or Fish-) was defined by the 2013 American Society of Clinical Oncology/College of American Pathology guidelines in our study [25, 35].

LN was considered positive based on the HE staining and IHC test. Each node was classified as having (i) macrometastasis (>2.0 mm in size), (ii) micrometastasis (> 0.2–2.0 mm in size), (iii) isolated tumor cells (ITC < 0.2 mm in size), or (iv) no detectable tumor cells (the Seventh Edition of the American Joint Committee on Cancer Classification) [24]. LN (+) status was defined as having micrometastatic or metastatic LN tumors; LN (–) status was defined as LNs with ITC or no detectable tumor cells [36] (Figure 4). 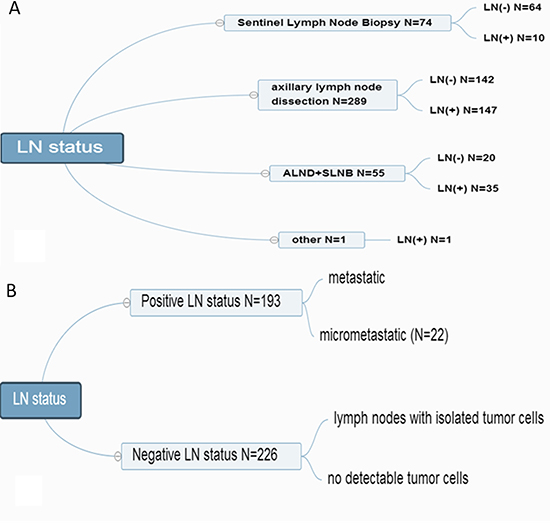 Associations between the clinicopathological parameters and the patterns of mammographically detected calcifications as well as LN status were evaluated. A univariate analysis of variables was carried out using a Chi-square test and one-way analysis of variance (ANOVA) with a P value of < 0.05 as the limit of statistical significance. The variables that obtained a P value < 0.1 with univariate analysis were subjected to multistep multivariate binary logistic regression (version 15.0; SPSS Company, Chicago, IL).